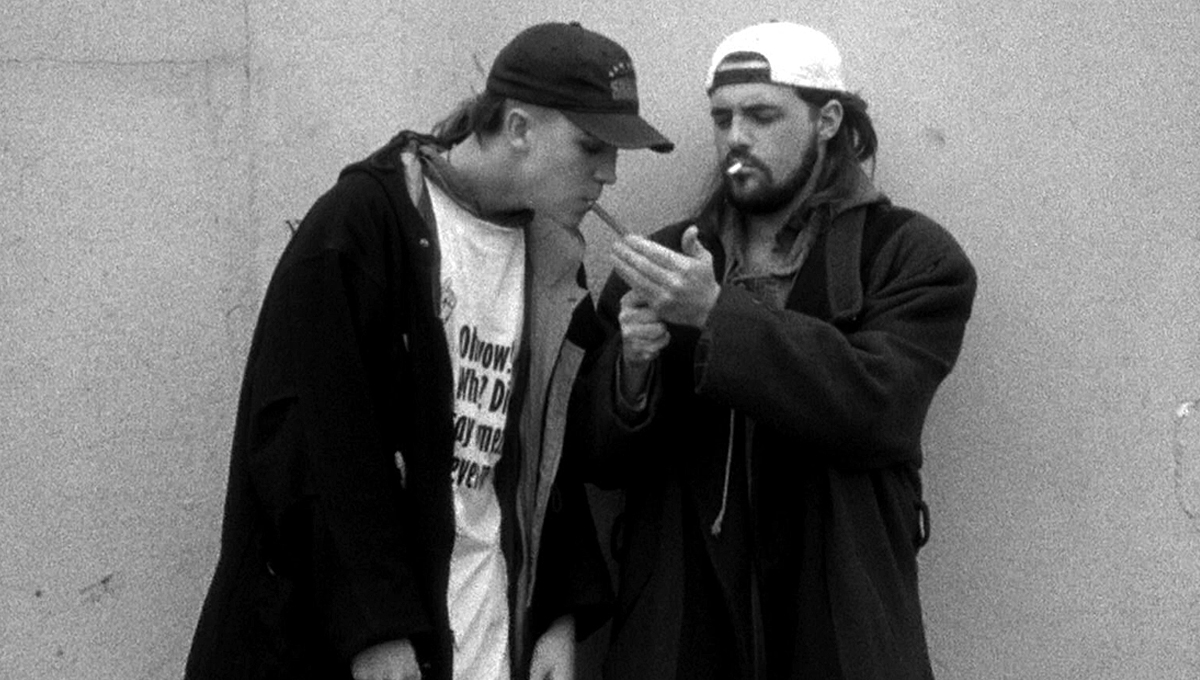 The original Clerks was, arguably, geek culture’s first major shot across the mainstream bow upon its Oct. 1994 release. Having rode Cannes Film Festival buzz from earlier that year, the print-media-proliferated story of a regular dude from New Jersey selling his precious comic book collection to help fund his $27,575 indie passion project stoked a cultural curiosity that money couldn’t buy. Of course, said curiosity yielded the breakthrough of a lifetime for the dude in question, Kevin Smith. Now, some 27 years and several shared-universe films later, the filmmaker and recent Masters of the Universe visionary reveals that Clerks III will provide the ultimate onscreen homage to his watershed original: A Jay & Silent Bob dance number.

The wrap of principal photography for Clerks III was announced by director Smith in a celebratory tweet accompanied by a photo of the cast and producers inside of Quick Stop Groceries, specifically in front of what may very well be the most famous convenience store checkout counter in film history. However, he also teased the extent of the film’s inevitable array of nostalgic callbacks. Notably, he reveals that the final scene shot will recreate the famous, lines-deprived scene in the black-and-white original film, in which resident weed-addled storefront loiterers, Jay (Jason Mewes) and Silent Bob (Smith), break into a slam dance as “Violent Mood Swings (Thread Mix)” by ‘90s radio era Industrial/Alternative band Stabbing Westward blasts on a boombox.

The original scene (which you can watch just below) was hardly supplemental to the plot, and appears randomly in the film, almost as an interlude utilized for pacing. However, the scene’s unforgettable nature is attributed both to the rather abrupt way it puts a comical veneer of accessibility on the drug-dealing twosome, who initially came across as rough characters—due to the contrast of Jay’s loud rhetoric and Bob’s initially-ominous silence. While some viewers might have predicted that the duo would eventually start a potentially-violent confrontation with embattled uptight counter jockey Dante Hicks (Brian O’Halloran) and adjoining, acerbic video store steward Randal Graves (Jeff Anderson), their bluster was merely a facade. The scene initially sets a dark, shadowy, expressionistic tone before breaking into Jay’s wacky, quasi-hip-hop dance moves, and gets funnier when Bob unprecedentedly breaks his stoicism to join in on the number. Consequently, the duo was instantly transformed from dangerous delinquents into the C-3PO and R2-D2 of Smith’s still-embryonic View Askewniverse.

Coming off that comical metamorphosis, Mewes’s Jay and Smith’s Silent Bob served as the unifying thread of the latter’s cinematic continuity, setting the duo’s returns, in more blatantly-comical form, for live-action movies Mallrats (1995), Chasing Amy (1997), Dogma (1999), headlining glory in Jay and Silent Bob Strike Back (2001), Clerks II (2006) and, most recently, Jay and Silent Bob Reboot (2019). Thusly, with Clerks III now on the horizon, the duo’s overall number of film appearances will soon stand with eight films—and that’s not even counting their animated appearances, first in 2000’s short-lived ABC-aired Clerks: The Animated Series, and feature Jay & Silent Bob’s Super Groovy Cartoon Movie (2013). Moreover, in the event that Smith’s long-mooted plans for a direct Mallrats sequel finally bears fruit, then they would likely make it to nine movies. It’s quite the prolific CV for a couple of ne’er-do-wells, thanks, in part, to a certain shadowy dance number in front of the Quick Stop.

For Smith, the completion of Clerks III represents the culmination of several years’ worth of false starts, notably halted in the wake of his Feb. 2018 heart attack. He would finally get things back on track in late-2019, having scrapped his previous script, starting completely anew and bringing his proverbial band of convenience store dwellers back together for a production that would slowly navigate the pandemic. Indeed, Smith, Mewes, O’Halloran and Anderson are all back, as is Rosario Dawson, who reprises her Clerks II role as Becky Anderson, presumably still working alongside Dante and Randal at the Quick Stop, which they rebuilt from a store-closing fire at the end of the sequel. Additionally, in a most intriguing callback, Marilyn Ghigliotti will return to reprise her role as Veronica Loughran, who was Dante’s woefully under-appreciated girlfriend in the original movie.

Clerks III is set to premiere in 2022 on a date to be announced.

Dead Space Remake: How to Unlock and Survive Impossible Mode
Xbox’s Lack of Exclusives Has Been a Real Problem For the Series X/S Generation
How Did the Cordyceps Infection Start In The Last of Us Games?
SHAZAM! FURY OF THE GODS – Official Trailer 2
DC Movies and TV Shows: Full DCU Schedule