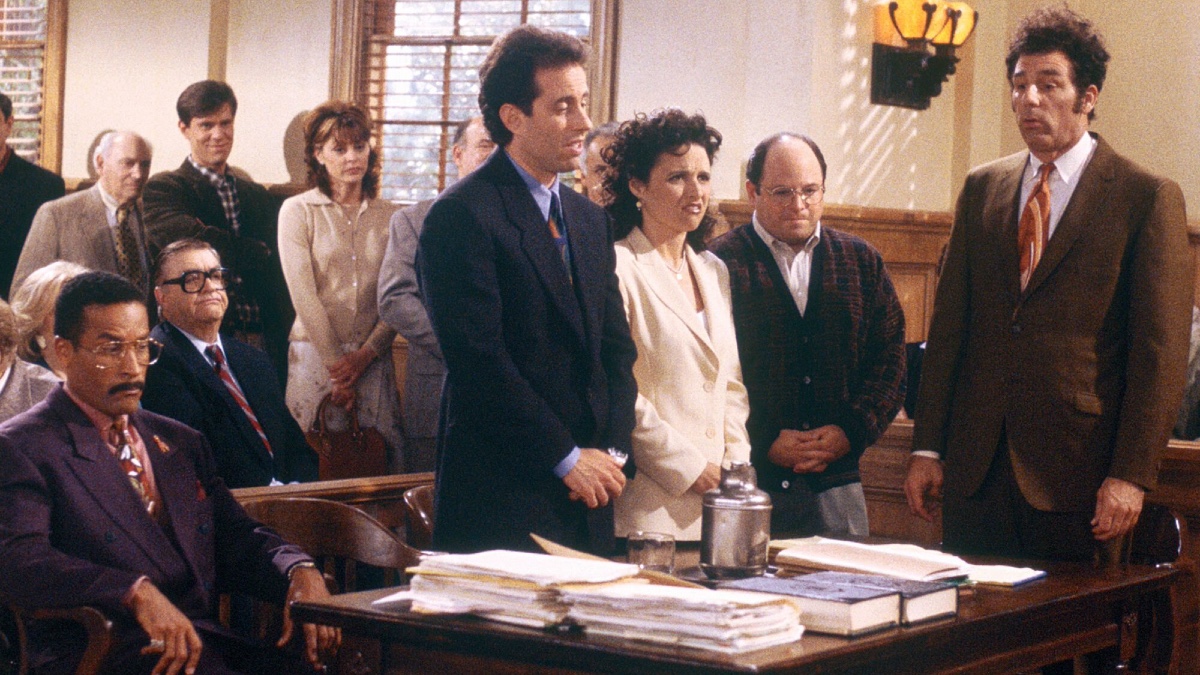 Netflix will stream the entire 180-episode library of a TV classic starting October 1, 2021. Seinfeld is as beloved and influential series as I Love Lucy, The Honeymooners, M*A*S*H, The Mary Tyler Moore Show, and The Simpsons. But why? It doesn’t make us feel better about ourselves and we never come out smarter. Creators Jerry Seinfeld and Larry David never produced a “very special” episode, or tugged at the heart strings. Even its most tear-jerking moment, the loss of George Costanza’s (Jason Alexander) fiancée to cheap postage stamp glue, was merely a setup to a killer punchline. But it did teach a lesson. Don’t skimp on wedding invitations, it could be fatal.

Seinfeld operated on a “no hugging, no learning” edict from its very inception. David commanded no emotional or intellectual growth would be tolerated. Michael Richards’ Cosmo Kramer only really got close to people when wearing the Kavorka jacket. Elaine, played by the now most-awarded actress in TV history, Julia Louis-Dreyfus, would never think of taking dance class.

In spite of itself, Seinfeld did promote coping skills. Kramer could afford to live in an Upper West Side apartment with no visible means of support. George’s father Frank Costanza, played by Jerry Stiller, grew to appreciate Serenity Now on demand. The wise writers of the show knew there was a fine line between Zen and nihilism. After the series finale, Jerry, Elaine, George, and Kramer have years to ponder life’s lessons.

Here is some of the knowledge the Seinfeld characters have going in:

Jerry Seinfeld, the actor, comedian and creator of the show which bears his name, grew up knowing “reading is fundamental.” His show broke rules of television, and his character ran afoul of a library cop investigating an overdue copy of Henry Miller’s Tropic of Cancer. It was last spotted when Jerry took it out in 1971. But for a guy who started a show with a no-learning credo, it’s not a big thing.

“Maybe we can live without libraries, people like you and me,” library investigations officer Lt. Bookman (Philip Baker Hall) warns the successful comedian. “Sure, we’re too old to change the world, but what about that kid, sitting down, opening a book, right now, in a branch at the local library and finding drawings of pee-pees and wee-wees on the Cat in the Hat and the Five Chinese Brothers?” That child would probably end up like Mr. Heyman, the teacher who got fired for giving Costanza a wedgie.

Do women know about shrinkage? Anyone who didn’t, learned about it from George in “The Hamptons,” from season 5. The human body was designed to operate best in its natural temperature of 98.6 degrees Fahrenheit. When a man goes swimming in cold water, the blood rushes to warm the vital parts, like the brain and heart, leaving appendages to shrink “like a frightened turtle.” No one knows why it happens. It just does. George is right to think Jerry’s girlfriend got short-changed when she accidentally walks in on him changing out of his swimsuit. Elaine doesn’t even know how men walk around with those things.

There is a reason United States postal workers “go crazy and come back with a gun and shoot everybody.” Speaking as one of the brethren, Newman (Wayne Knight) says it’s “because the mail never stops. It just keeps coming and coming and coming, there’s never a let-up. It’s relentless. Every day it piles up more and more and more, and you gotta get it out but the more you get it out the more it keeps coming in. And then the bar code reader breaks and it’s Publisher’s Clearing House day.”

Jerry Seinfeld’s nemesis calls in sick when the weatherman predicts showers, even though it is first on the list of the “neither rain, nor sleet, nor snow” mailman oath. Oh, and forget everything you think you know about zip codes, “they’re meaningless.”

“Hi, my name is George. I’m unemployed, and I live with my parents.” With a pickup line like that, what could possibly go wrong? It lowers the bar so much, it is irresistible, and there is nowhere to go but up. When Costanza tries out his bad luck opening he’s a flailing real estate agent with little to no prospects.

“My life is the complete opposite of everything I want it to be,” he says. But realizes “If every instinct you have is wrong, then the opposite would have to be right.” And George Costanza vows, for the rest of his life, to go against any normal instinct he feels. By the end of the episode he is working as the Travelling Secretary of the New York Yankees.

“You better give me the insurance because I’m going to beat the hell out of this thing,” Jerry tells a rental car agent in the season 3 episode “The Alternate Side.” He is absolutely justified, even though auto insurance on a rental is a rip-off, according to The Good Place. The first rule to comedy is timing, and the first rule to making a reservation is keeping it. Look how well it worked out for the gang when trying to get seated in “The Chinese Restaurant.”

That rule also applies to car rentals, so Jerry is fully within his rights to break the credo of the show and explain the laws of perpetual motion. “You know how to take the reservation,” he schools the agent. “You just don’t know how to hold the reservation. And that’s really the most important part of the reservation: the holding. Anybody can just take them.” That’s how he got booked on The Tonight Show.

If we learned anything from all our years watching Seinfeld, it is that we’ve learned nothing. Not a thing. Legend has it, the show was pitched to the networks like that, and this was corroborated in “The Pitch.” “So, we go into NBC, we tell them we’ve got an idea for a show about nothing,” Jerry asks George for clarification. In reality, the whole show-about-nothing pitch was made up by the press. But Seinfeld knew enough to play into that.

He learned it on Seinfeld.

Seinfeld will be available to stream on Netflix starting October 1, 2021.

15 Best Looking Sega Genesis Games Ever
Yellowstone Season 5 Trailer Breakdown: A First Look at Governor John Dutton
The Legend of Zelda: Who Created the Triforce?
Why Google Stadia Failed and Is Finally Shutting Down
The Last of Us HBO Series: How Melanie Lynskey’s Character Expands the Game’s Universe