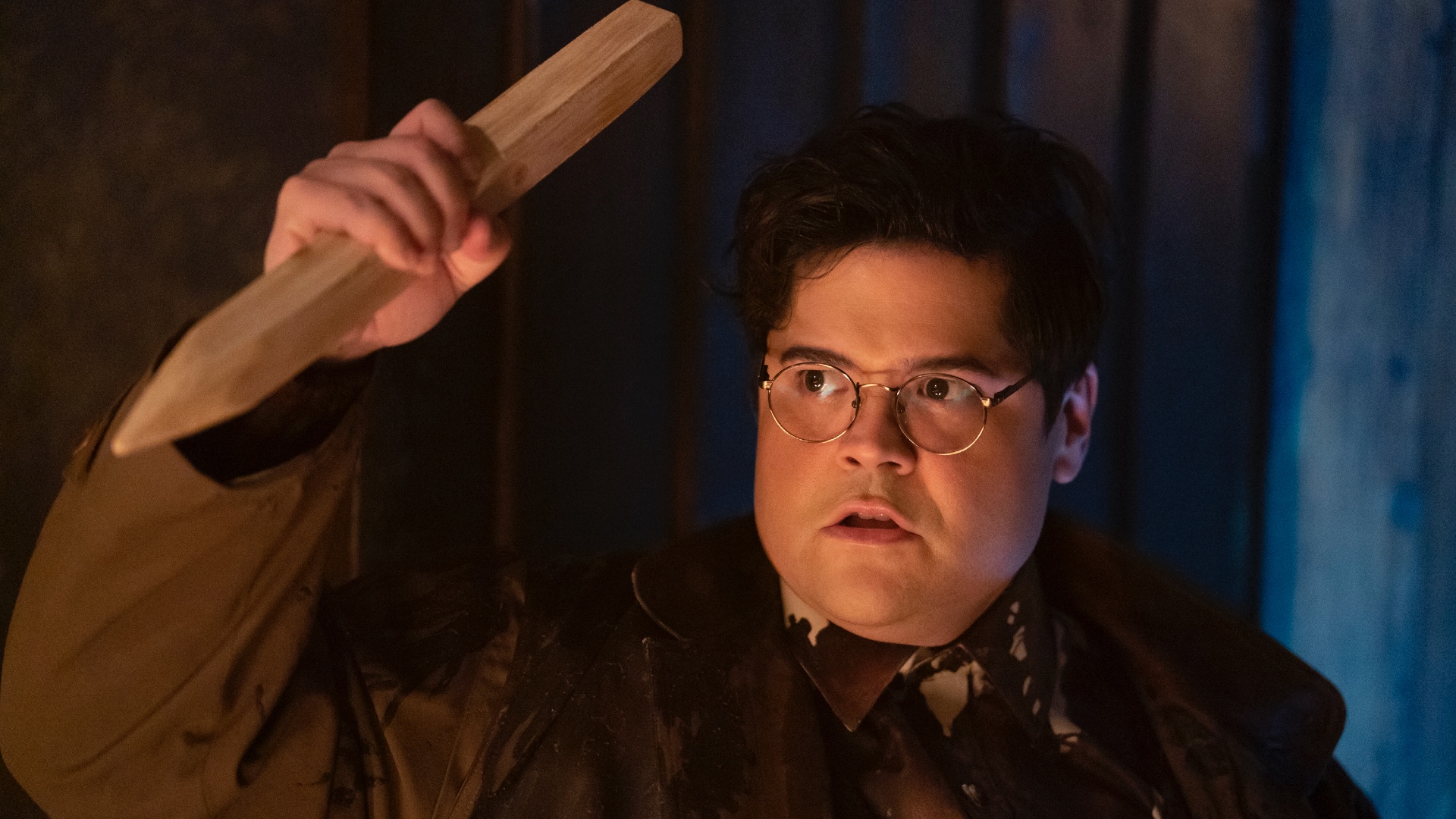 What We Do in the Shadows Season 3 Episode 1

What We Do in the Shadows season 3 episode 1, “The Prisoner,” moves quickly through the blood and raw meat left over from the slaughter of the season 2 finale, “Nouveau Théâtre des Vampires.” The episode is named for the faithful familiar Guillermo (Harvey Guillén), who took out about 70 percent of the most powerful vampires in the Tri-State area. When the episode opens, he is being held in a cage while Nandor the Relentless (Kayvan Novak), Nadja of Antipaxos, (Natasia Demetriou), Laszlo Cravensworth (Matt Berry), and Colin Robinson (Mark Proksch) decide his fate.

It’s not an easy decision, apparently. Much of the opening finds the vampires arguing over whose responsibility the errant servant is. Nandor is happy to share ownership of the young man who slew the upper echelon of blood-thirstiest suckers in the northeast. Nadja and Laszlo vote thumbs down, no way, kill him. Even Nadja’s doll wants to take the stuffing out of the Van Helsing descendant. The discussion which leads to the living doll having a vote in the Staten Island house rules is priceless foolishness. The highlight comes in unison. Colin Robinson really doesn’t care what happens to “Gizmo,” the name he adopted after Laszlo tagged Guillermo with it.

Colin drops the first F-bomb of the season, and it lands a little awkwardly. This is a vampire who takes energy from people with subtle and usually passively aggressive attacks. Here he is frustrated and, let’s face it, drained by the vampires around him. Nadja and Laszlo have especially had enough of their psyche-draining roommate and Colin should be energized by their annoyance. But he is visibly agitated at being shut down, even though he should be eating that up. Also, it’s not quite clear what he gets out of sifting through the prisoner’s toilet bucket, looking for secret messages. He seems to be only draining himself there again. That’s not vampiric, that’s cannibalistic.

While it is highly amusing how Guillermo has to warn Colin about touching an electric cattle prod to a metal bar, it seems the psychic vampire endowed with will-sapping trivia knowledge would know which end was hot. However, when Colin refuses to give credit to the prison for making him zap himself, he might actually be paying the vampire hunter a compliment. We are not entirely sure whether Colin is playing up the dangers the prisoner poses to the vulnerable vampires because he believes it or is just feeding on the fear he can raise. It feels like Colin believes it when he warns the others that they don’t know Guillermo’s full powers. He is also the only roommate to notice how the imprisoned slaughterer got out of his cage in time to toss stakes at an unannounced visitor.

“Yes, we get it, you’re a vampire killer with the stakes and the reflexes and all that,” Dark Shade (Kristen Schaal), the Floating Woman from the Vampiric Council, says. “Great job.” This affirms what Nandor has been saying, and Guillermo has been Machiavellian-ing, since the beginning of the episode. There is a warriors’ code. Guillermo lived up to that code, and continues to do so, while also performing his other tasks unencumbered by the cumbersome vampires.

His is an interesting character arc, which Guillén presents completely unselfconsciously. Guillermo is as naïve as the day we first saw him, but wise enough to impress his acumen onto the audience and camera crew. Guillermo is even beyond the effects of quadruple hypnosis, something which would give the brain-scramblies to even the most willful humans. This may be because he had an intellectual head start. All of the vampires, except for Nadja and Laszlo – who would never think to look a familiar in the eye – acknowledge his growth. Even the high counselor on the council which rules over all the councils takes notice.

What We Do in the Shadows is based on the 2014 feature film by Jemaine Clement and Taika Waititi, so it should come as no surprise one of the true creators is the Supreme Worldwide Vampiric Council member who presents the Staten Island vampires with their new obligations. It should be a surprise he can’t work a VCR, but none of the vampires really got a handle on it. They all bought Betamax machines. The elder vampire reaches a completely valid conclusion. Yes, the Staten Island vampires broke the biggest vampire code: don’t kill vampires. Yes, it’s a big rule, it comes up in every conversation, vampires never shut up about it to remind themselves how big a rule it is.

However, when a vampire takes out 37 vampires in a clip it shows a kind of leadership quality. And putting these vampires at the tops of the local Vampiric Council begins with the very promise of things to come. Before anyone has even sat on the throne, there’s a scrabble for leadership, false humility, and some real ennui from Laszlo. He did not become a vampire to be a paper pusher, and doesn’t give a shit about vampire councils. Colin Robinson, as we know from previous episodes and are reminded again, has been very active on the local vampire political front.

Giving power to the main character is a gamble, both for the Council and for the series. The logic which brings them there is absurdly perfect. The wisdom to stay will probably be too much for them, so it will be fun to also watch them fumble it. While it is a thrill to see a supernatural kick from Nandor send a heavy crate sailing across a cell, it is more fun to hear him complain about the splinter in his boot. These vampires have lived longer than most creatures on earth, and in all that time, they’ve learned nothing. They are still clumsy, whining, children. It is too easy to call them narcissists, they are only amateur hedonists.

“The Prisoner,” which was written by Paul Simms and directed by Kyle Newacheck, is a fast-moving opener to what looks to be a brisk season of transitions. Guillermo remains vertical but gets a lateral promotion. Three of the four vampires get to vie for local power, and one gets to spend more time in the potting shed.

HBO’s The Last of Us: The Changes to Bill’s Story and the “Parallel Universe” of TV
Once Upon A Time Season 7 Episode 5 Review & AfterShow | AfterBuzz TV
Hogwarts Legacy PC Requirements: Can You Run the Game?
Snowpiercer, Infinity Train and Other Erased Streaming Series You Can No Longer Watch
The Sandman | Comic to Screen: Hob Gadling | #Shorts