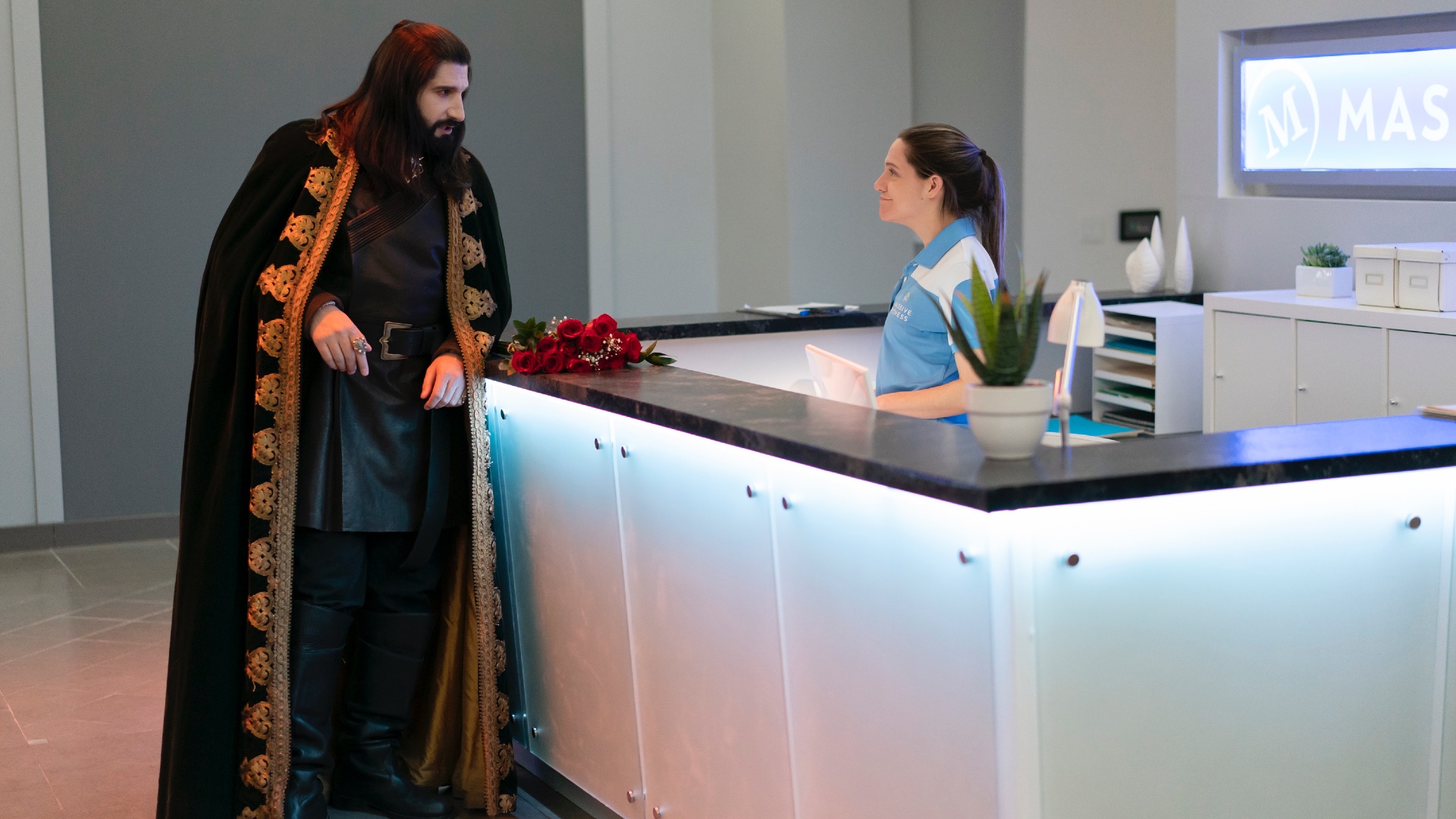 What We Do in the Shadows Season 3 Episode2

What We Do in the Shadows  season 3 episode 2, “The Cloak of Duplication,” finds Nandor the Relentless (Kayvan Novak) and Nadja of Antipaxos, (Natasia Demetriou) in a battle of will, strength, and endurance as they vie for the top seat of the local Vampiric Council. As the episode opens, it appears there is little middle ground for the two bloodsuckers. Nadja vows to fight to the very last ounce of her being to claw the top position from the former warlord’s fingers. Nandor is only looking for a firm number 2.

Guillermo (Harvey Guillén) is a little cocky tonight, openly giggling at vampiric shows of prowess, and making sport of the tiny cages superior beings keep trying to secure him in. He is no longer a familiar, and has no patience for waiting rooms. He’s an open range vampire-pet, and now that he’s been laterally promoted to bodyguard, he’s an absolute rascal. No one has forgotten the slaughter of the season 2 finale, “Nouveau Théâtre des Vampires,” when he took out the most powerful vampires in the Tri-State area. Except maybe Laszlo (Matt Berry), who doesn’t bat an eyelash when Guillermo drops voluminously into the council’s reading nook in a feat of superhuman physical comedy.

“Don’t touch that book, Gizmo” is all Laszlo has to say, saving the young man from a fate of “death by pornography.” The Level B office contains a library which stretches stories, shelves bursting with books and manuscripts, wooden scrolls and papyrus. And in it, buried between first editions of ghastly grimoires and heretical hymnals, is a treasure trove of the rarest pornography in the known world. They go back to the books of enormous Egyptian penises, Laszlo explains, reverently. The absolutely most hysterical is “Roy Cohn, Esquire’s 169 Sex Positions (1954).” It comes out of nowhere and is as relevant today as it was when it first went unpublished.

Timing is the most important element of all the moving arts, but paramount to music and comedy. While the cast of What We Do in the Shadows are expert in this with frightening consistency, there are two moments in “The Cloak of Duplication” which showcase the show’s unique take on timing using two completely different approaches. The first comes in the library. Colin Robinson (Mark Proksch) is explaining the expanse of books, the wealth of knowledge contained in those books, and how rare and valuable each and every volume is. When Laszlo casually tears a page from one of those books, a large section of the audience will gasp, without thinking, and then laugh. It is like the cymbal hit on the comic drum triplet of old-time standup comics.

The other example comes when the newly appointed council makes their first house call, to rein in a rogue vampire clan in Queens. After knocking on the door, Nadja and Nandor make their introductions at the same time, but with entirely different intents. Nadja is aggressive, almost violently so, while Nandor is conciliatory, embarrassingly so. They are each soloing at the same time, but they hit the exact same beats, culminating in their introduction of Colin Robinson. Nandor presents the psychic vampire jovially, a new friend who’s come to visit. Nadja throws him down as a threat she can unleash.

Dark Shade (Kristen Schaal), the Guide to the Vampiric Council headquarters, is perfectly unsuited for the role. Whether dealing with the water company or touchy-feely bulls in a China shop of priceless antiquities, she defines the concept of above a pay grade. Schaal maintains a shriek of eternal consternation under her voice at all times. Her annoyance is palpable and her restraint is so thinly veiled it is a wonder how long she manages to contain herself. Even as she tries on the mystical garment which makes for the title of the show.

The Coat-of-many-Nandors subplot is a tour de force for Kayvan Novak. Nandor the Relentless’ description of mano a mano one-upmanship in Massive Fitness is as excruciating as his aggressively competitive weight pumps. But when confronted by his true nemesis, vulnerability and anachronistic impotence, he goes far past the distance. That is Novak doing all the voices of the people who wear the Cloak of Duplication. He’s quite the mimic, and apparently has been entertaining his castmates with impressions of themselves since he hit the set. He not only nails the voices, but the stance or slumps or shoulder rolls of the actors who would be playing in his skin. When Guillermo-as-Nandor runs away from the Massive Fitness femme fatale who has captured Nandor’s heart, it is character comedy platinum.

Through all of this, Nadja pulls off the greatest coup d’etat. She asserts her individual brand of personal power long before its heart-wrenching conclusion. When the two councils all agree they are reasonable vampires, Nadja says “Not me.” She never deviates from the plan and fully commits to the joke, which has been bubbling throughout her performance. Nandor, Colin, and even Laszlo think about some of the larger issues. That there may be more to life than slaughter and bloodlust. Nadja laughs at that, and then steals the entire cloak gag by making it a punchline in a sex joke we must have always known was coming.

” The Cloak of Duplication” was written by Sam Johnson and Chris Marcil, and directed by Yana Gorskaya. Accept no substitute, What We Do in the Shadows is a unique voice in televised horror comedy because it is an extremely traditional sitcom. Even with the innovations of the mock-documentary style and constant barrage on the third wall, it works through classic comedy and character commitment.