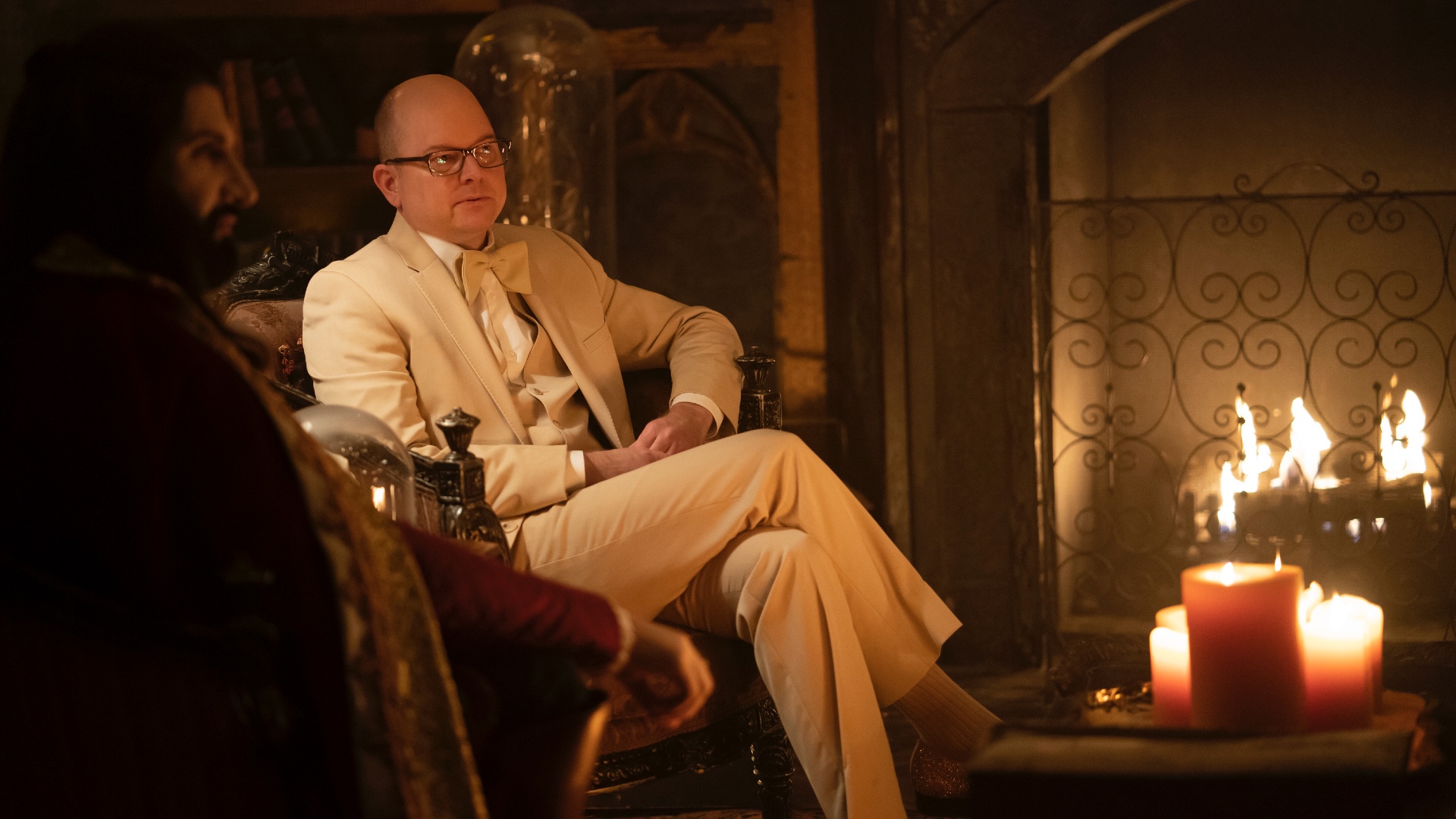 This article contains spoilers for What We Do in the Shadows season 3’s first two episodes.

Boredom, tedious, tiresome, flat. These are not the first words which jump to mind when thinking of vampires or comedy, but What We Do in the Shadows wields them like secret weapons without sacrificing a single laugh or scare. The FX horror farce, which is a series adaptation of the 2014 feature film created by Taika Waititi and Jemaine Clement, follows four vampires. They have been roommates since, well, forever, but one is different from the rest.

Nandor the Relentless (Kayvan Novak), Nadja of Antipaxos, (Natasia Demetriou), and Laszlo Cravensworth (Matt Berry), are traditional vampires. They drink blood, a virgin’s if possible. This is usually supplied by their familiar-turned-bodyguard Guillermo (Harvey Guillén). A probable virgin himself, but off limits. Even vampires know not to feed on their own supplier, especially one who has taken down the entire local vampire hierarchy. The fourth vampire does not drink blood. He subsists on the lifeforce of others. He is an energy vampire, and no one is safe from his appetites. Familiars are fair game, and so are the other vampires.

Colin Robinson (Mark Proksch) looks like an office drone, talks like an automated menu, and has the presence of an interdepartmental meeting memo. A simple watercooler chat can drain a listener of the very will to live. It’s tasty. The Staten Island vampires have been named head of the entire Tri-State vampire community and Colin, who will be celebrating a major milestone this season, is undergoing a search for self.

You don’t have to look far from Colin to find Mark Proksch, the actor who plays him. In Better Call Saul, he played Daniel “Pryce” Wormald, the ineptly arrogant pharmaceutical connection who was very particular about his baseball cards. On The Office, he played Nate, a proven entity, but not without handicaps, like hearing, vision and cognition. With offbeat roles on This Is Us, Modern Family, Portlandia, Drunk History, Bob’s Burgers, and Adventure Time, Proksch has spent his career playing yo-yos, his first appearance was as a self-proclaimed master.

Proksch spoke with Den of Geek about vampire centennials, television perennials, and freezing his genitals playing kickball in the snow.

Den of Geek: Hello and thanks for doing this, and I wanted to wish Colin Robinson a happy birthday.

Mark Proksch: Well, it’s a little premature, but thank you.

I know the season is building to it, but will you be throwing a big celebration?

Yes. There will be some festivities, Colin Robinson style.

I don’t know his sign. Gosh, that’s a good question. I don’t think he knows it, even.

Is there anything he wants for his birthday?

I think what he wants most is to know where he came from, and where he’s going. He’s in a bit of an existential funk right now. And he’s doing a lot of research about energy vampires. The problem is there’s not much out there on energy vampires because no one likes them. So, there aren’t many books about them. When he goes into the big Vampiric Council library, he can’t find a single word about energy vampires. And that’s probably because they’re so reviled within that community, that they don’t respect the energy vampires, or have any of their books.

You’ve been doing a lot of research on the history, and the nature, of energy vampires, as you said. What do you think, or, what do you call what he is feeding from? Is it Prana? Chi? Neurotransmissions?

Does Colin ever contemplate the carbon footprint of the energy vampire?

No, I think Colin’s in for it just for himself.

How come Colin can stand fire, he laughs it off, but he can’t deal with a cattle prod?

Yeah. Tony, you’re poking holes here. I don’t know. That’s, again, a very good question. Why doesn’t fire hurt him, but a cattle prod shocks him? Maybe, because one is energy? I mean, electrical energy, I should say. I guess heat is its own energy.

In the Cloak-of-Many-Nandors episode, how did it feel to hear Kayvan Novak do you? And did you give him pointers? Did he drain you in the process?

Yeah. Well, Kayvan has been doing all of us, since day one of shooting. So, it wasn’t a revelation to hear him do my voice. That said, we all sent recordings to him so he could perfect it. I haven’t seen the episode yet. The night we were filming my scene, it was about 4:00 a.m., it was one of the coldest nights in Toronto. So, I didn’t stick around to hear him do my voice. But I’m sure it’s as good as he was doing it on day one.

There’s a lot more location and exterior shooting this season. Is that more fun? Or is it just another day in a different cubicle?

I love our set. Kate Bunch, who is our set designer, is an absolute genius. And we film in the cold months, in Canada. So anytime we get to be on set, near the fireplace that actually works, is a plus. Filming on location has its limitations. We can’t film during the daytime, because the vampires will be burned up. So, we always film at night, when on location. And it looks like it’s 11:00 p.m. or 10:00 p.m., when in fact, it’s usually 3:00 a.m. or 4:00 a.m. And so, when we go on location, we’re usually shooting pretty unpleasant evenings. So, I’d much rather film on set. Filming on location can be fun though, because you have a lot more interaction with real people. And I think that’s one thing that makes the show really funny, is seeing these idiot vampires dealing in the real world. So, it’s kind of fifty-fifty for me.

Did you have fun in the snowball fights?

Yes. There are a lot of snowball fights, yes.

The last time I spoke with you, Colin had just gotten a promotion and it kind of went to his head. How is it for Colin now, to be in power at the Vampiric Council?

I think, as much as Colin loved having some power, I think his M.O. is really, just fading into the background. That way, he can prey a lot easier. Just trying to mix into the group. Be a spider with his web, in the background. I think that’s how he prefers to prey. And so, even when he becomes part of the Vampiric Council, he still allows others to exceed him in power. And so, this season, when Nandor and Nadja are the heads of the Vampiric Council, he’s more than happy to be the secretary. The most boring job you can have in a council setting, taking the notes.

Who do you think Colin would prefer on the throne, Nadja or Nandor?

That’s a great question. I think he would probably prefer Nandor, because Nandor is so stupid. Nandor is very, very dumb. And so, he, Colin, can get Nandor to do pretty much anything he wants. Whereas Nadja, I think Colin likes Nadja. And I also think that Nadja’s too smart to fall into Colin’s traps.

Does he get a jolt out of things like the heart ripping?

Yeah, I think so. I think he does enjoy that type of stuff. Yeah.

Can you feed off Nadja’s ghost in the Nadja doll?

Will Colin’s research turn up any famous energy vampires? And have you come up with your own?

When you look back on your character’s past, do you find any trace of Les Nessman DNA?

Only in my acting. I loved WKRP, and Les Nessman was definitely a good energy vampire. Just a great character, and acted brilliantly. Yeah, I’m sure I stole from him. You know, it’s interesting, I mostly watch classic television. And I’ll see something, and I’ll be like, “Oh, that’s where I got that. That’s where I took that from.” I haven’t seen him since childhood, but it made an impression on me that, “Oh, okay. That’s why I do that.” And that becomes very eerie to me, when I realize I’m just a culmination of things I’ve been watching my whole life.

I’ve recently been watching it and was amazed by the physical comedy. Arthur Carlson was a genius. So, tell me about the physical comedy in What We Do in the Shadows. Because you’re using not just you, the actors, but you have the effects, and there’s a lot going on, especially, in the backgrounds.

Yeah. I personally love being able to do physical comedy. And Colin Robinson is so great for that, because he’s so at two with his body. He’s not a physical human being. He’s not athletic, to say the least. And I think it adds an extra layer to the character, when you actually see him physically emote, really. Whether it’s dancing, or playing kickball, he’s very unsettling in his movements. Then when you add in the ability to fly, once in a while, or throw people against a wall, it really becomes a playground that not a lot of shows let you get to do. Explore those extremes of physical comedy. And so, I love it for that reason.

You mentioned being free to emote. In the opening episode, you actually are peeved when you can’t feed off of Nadja and Laszlo, and when they shut you down. Does Colin get drained when the feedees don’t give with the Prana?

Yeah, I think he gets really frustrated. It’s almost like a dog that’s always promised a treat, but never is actually given the treat. I think he becomes furious. And he thinks it’s unfair, I would expect, and thinks that they’re not playing by the rules. His bizarre social rules, in which he should be allowed to feed on whenever he wants. Because he gets to do it all day long at work. Anytime he’s out of the house, he gets to do it. But when he’s in the mansion, they know what he’s up to, and they can shut him down pretty quickly. I think he gets frustrated.

Also, still with the first episode, your toilet duties. They only seemed designed to annoy you. So, when you’re actually annoying yourself, isn’t that like cannibalism?

I don’t know if he’s annoying himself. I think he’s really into what’s going on in those toilet buckets. That’s all. I think he’s curious.

You meet a big fan in the rogue vampire house, in Queens. Does Colin’s reputation precede him? And will we see a growth in his vampire community renown?

That’s a great question. I think his reputation does precede him. That said, I don’t know what the writers have in store in that story. I mean, it would be interesting to see him rise to a level of energy vampire stardom, and how he would handle that. But I don’t know.

Is that a little counterproductive?

It would be in his mind, absolutely. Again, it goes back to him being the spider with the spider web, and just, kind of, hanging out in the background.

Junji Ito Maniac: Ranking the Stories From Creepy to Downright Terrifying
Wynonna Earp Season 3 Episode 5 Review & After Show
The Last of Us: Can Ellie Infect Others?
The only way you’ll get me to run is if a Allosaurus is chasing me.🦖 #short #shorts #scifi
Lost Big Bad Beetleborgs Pilot Would Have Ditched The Horrifying Flabber