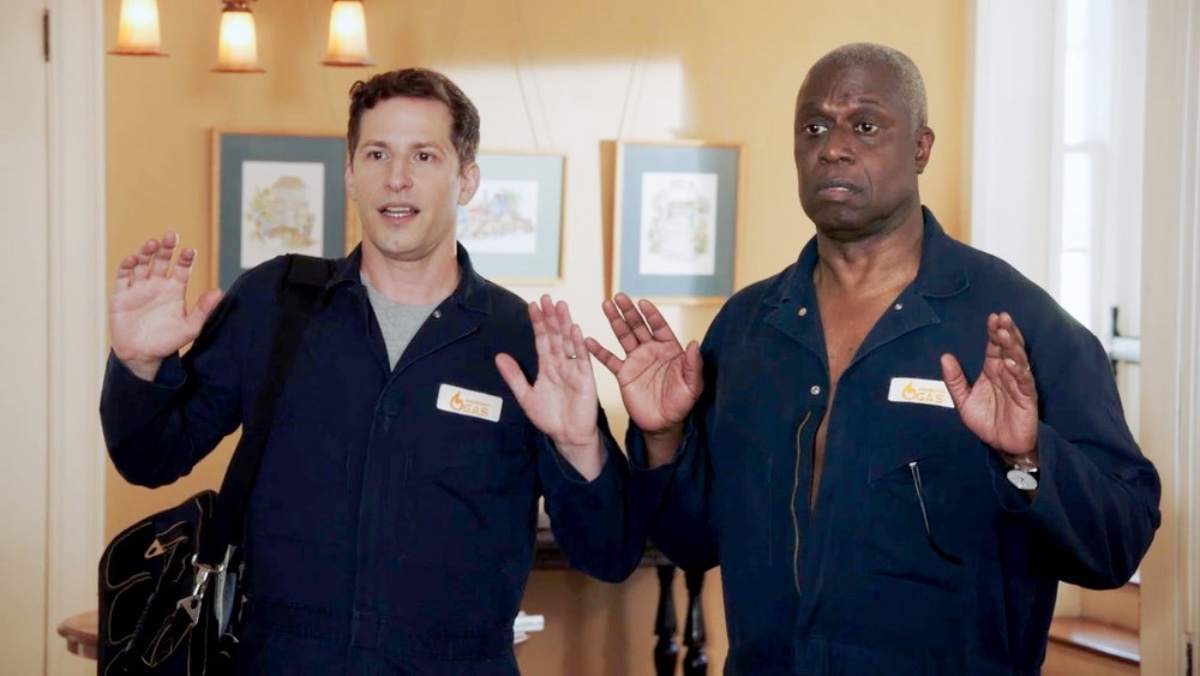 This article contains spoilers for Brooklyn Nine-Nine season 8 episodes 7 and 8.

The uneven final season of Brooklyn Nine-Nine continues this week with two episodes that feel like by-the-numbers installments that do little to dramatically improve the feeling that Season 8 has been a disappointment. By trying to serve two masters — responsibly telling stories about policing in a post-George Floyd world while also telling silly detective stories — Brooklyn Nine-Nine has given viewers tonal whiplash.

The dramatic moments don’t quite land and can feel heavy-handed, while the laughs simply have been few and far between. While “Game of Boyles” and “Renewal” each have their moments, with “Renewal” neatly, if too quickly, tying up the season’s arc, the entire affair feels rushed and half-hearted. And “half-hearted” has never been a word to describe the series before.

“Game of Boyles” is first and serves as a pseudo-parody of Knives Out. The problem here is that by this point, the film is almost two years old, and the parody feels stale. Also feeling stale are the Boyle family jokes. Look, I’ve always been a mark for Boyle jokes, like the weird unintentional sexual innuendos and the beige outfits, and while “Game of Boyles” gets laughs out of one Boyle calling a head massage an “HJ” and their affinity for drinking nutria milk, by the end of the episode, it all starts to feel repetitive.

The plot centers on the death of Charles’ great Uncle Pappy. Trying to escape the demands of fatherhood and support their friend, Jake and Terry accompany Charles to the Boyle family farm, but they discover that something is amiss with Pappy’s death. This leads to a classic whodunit in the mold of Rian Johnson’s film, complete with conflicting flashbacks and witness testimonies from strange Boyles. The Boyle black sheep Lyndon is suspected of killing his father, and once a suspicious hair is found near some rat poison, Jake decides to DNA test each Boyle to determine who it belongs to.

In a classic twist, it turns out that the hair belonged to a nutria who got into the poison, and since Pappy naturally drank the nutria’s milk, he succumbed to its effects. But that’s not the twist; the real twist is that the DNA test reveals that Charles is not actually a Boyle. While Charles resembles the Boyle family because the Boyle family cuddles their children so hard it reshapes their bones (the episode’s best joke), he’s not a true Boyle.

This reveal was engineered by Charles’ jealous cousin, Sam, but it’s beside the point. It all sends Charles into an identity crisis, but it’s quickly overcome when Charles miraculously opens his family’s Grandmother Starter, an extremely old sourdough starter with a very tight lid. The family says whoever opens the jar is said to be the One True Boyle, so Boyle’s crisis is over before it really has a chance to get going. Perhaps if this came earlier in the episode, the writers could have made more of a meal out of a spiraling Charles, but this resolves itself far too simply.

Same with the B-plot, which finds Holt getting on a dating app at the behest of Rosa and Amy. The pair believe that if Holt gets on a dating app, he’ll see how dreadful the waters are and try harder to resolve things with Kevin. Holt suspects the pair are trying to manipulate him, so he pretends to be into the dating scene, but his behavior in trying to “beat” Rosa and Amy allows him to see that he’s been trying to defeat Kevin in their therapy sessions. At the episode end, Kevin and Holt reunite in a pure Nancy Meyers movie moment, but once again, it all feels a bit rushed. There are some solid dating app jokes lobbied, but nothing especially memorable. Overall “Game of Boyles” is a serviceable if unspectacular episode.

If “Game of Boyles” was more parody than classic BK99, “Renewal” is the show hitting all of its familiar beats. There’s Jake and Holt donning disguises, racing against the clock to solve a case while the rest of the team pair off to aid in their main mission. In this case, Holt and Jake are trying to retrieve O’Sullivan’s laptop after he fudged the CompStat numbers on their police reform proposal.

They must distract O’Sullivan’s mom and break into his Man Cave to steal the laptop while Amy and Terry retrieve a fingerprint from O’Sullivan. What makes all of this trickier is that it’s happening on the day that Holt and Kevin have chosen to renew their vows in a lavish ceremony. Since Holt’s dedication to work is already their main point of conflict, Boyle and Rosa must distract Kevin so he doesn’t find out that Holt is working on their special day.

The Kevin-Holt marital problems simply do not feel high-stakes enough, nor in actual jeopardy, to warrant so much attention this season. While their coupling has provided great B-plot material, it simply buckles under the weight of trying to carry the main plot. Compare and contrast Amy and Jakes wedding to the ceremony between Holt and Kevin here, and you’ll quickly realize that the latter doesn’t have the same emotional heft.

That said, it was nice to finally see the couple kiss in two back-to-back episodes after never really giving the couple intimate moments, and Marc Evan Jackson really does his best to sell both moments. Andre Braugher, as always, is a revelation.

Anyway, this episode also falters by introducing the idea of Holt retiring for about 15 minutes before rolling it back entirely. Surely this could have continued to drive some drama in the final two episodes, but the idea of Holt retiring is never given enough time to feel like a real concern. Finally, after the plan to save their police reform proposal works, everyone tries to act like policing in NYC has been solved. Holt manages to say something like “this isn’t guaranteed to solve everything” but the episode acts as if this is a magic cure-all, which feels insanely naïve compared to the premiere episode’s bleak, thorough explanation about why cops are rarely prosecuted.

Comparing the end of this episode to the dark reality of the first feels like you’re watching two completely different shows. It’s understandable that a sitcom might want to have the sunny side ending, but this opens up the issue of whether this show was ever the appropriate place to be having these conversations in the first place. It’s yet another example of how this season of Brooklyn Nine-Nine just cannot please both sides of its audience.

With just one super-sized episode remaining, season 8 of Brooklyn Nine-Nine has been a serious mixed bag that will need to do a lot to pull off a satisfying conclusion. With Amy promoted to chief, it feels like Jake and Amy trying to navigate a work-life balance may provide the drama for the final two installments. I’d also expect a plethora of returning guest stars and recurring gags. While Season 8 hasn’t been a complete disaster, I’m really hoping they can stick the landing, or else this eighth and final season is really going to be a letdown.

The Last of Us: Are the Infected Actually Zombies?
The only way you’ll get me to run is if a Allosaurus is chasing me.🦖 #short #shorts #scifi
How to Find a PS5 and Xbox Series X In 2023
Teen Wolf’s Tyler Posey and Crystal Reed Break Down The Movie’s Painful Twists
Dead Space Remake Release Time: When Will the Game be Playable?