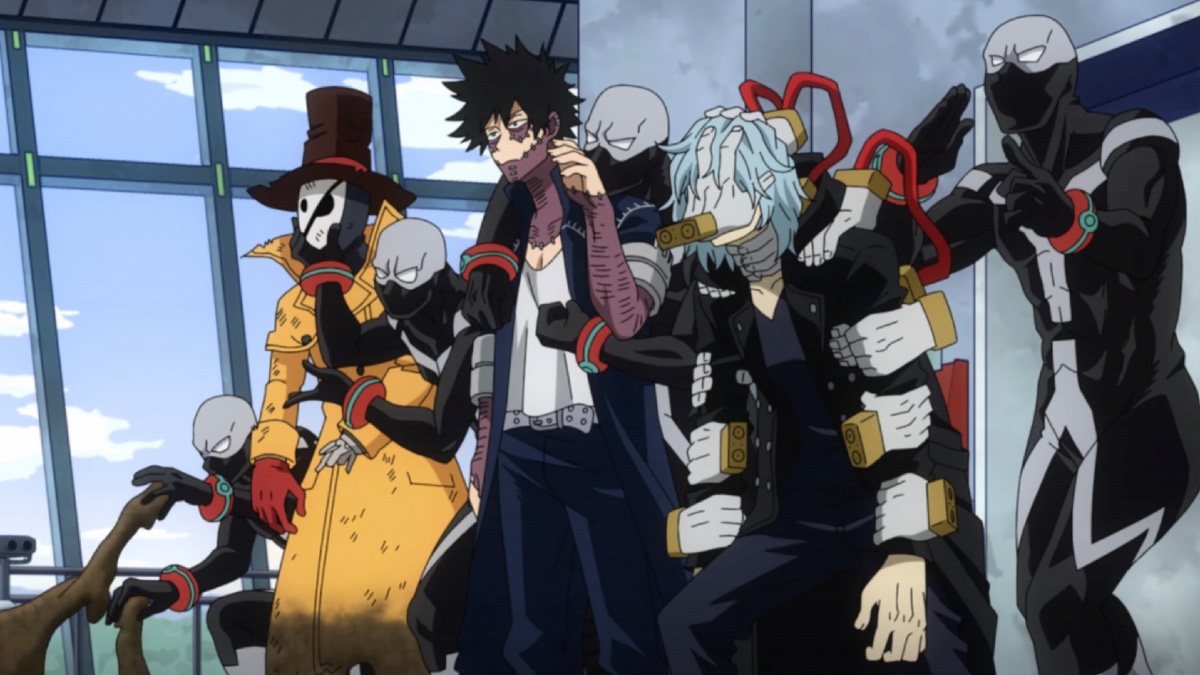 “Even if you stumble in life, you can pick yourself back up again.”

“All it takes is one bad day to reduce the sanest man alive to lunacy.” That’s the central question that the Joker poses in Alan Moore’s Batman: The Killing Joke, but it’s a concept that’s been prevalent throughout the histories of many of My Hero Academia’s villains. The events of “Sad Man’s Parade” explore how Twice’s life in particular has had a dark domino effect that progressively pushed him to his life of crime. This style of oppressive morality play can begin to feel melodramatic when it’s overdone, but what’s important about Twice’s situation in “Sad Man’s Parade” is that it also continually pushes the message that it’s never too late to turn your life around and that redemption can be right around the corner.

This is an optimistic virtue that’s evaded and crushed Twice in the past, yet it’s something that many of the head figures at the League of Villains are currently wrestling with in the tail-end of My Hero Academia’s fifth season. “Sad Man’s Parade” is an episode that lets a lunatic run the asylum, but the operation is such a success that maybe the League of Villains should let unstable trauma victims lead the way more often.

Twice has always been one of My Hero Academia’s most fascinating and frightening characters because of the frayed state of his mind and how the use of his Quirk appears to only make him progressively more unstable. The series has never necessarily made previous comparisons between the character and DC’s Clown Prince of Crime, but in terms of karmic mayhem it’s apt. “Sad Man’s Parade” pulls the trigger of removing Twice’s mask, but then sends the character into a dangerous tailspin when he confuses Skeptic’s puppets with himself and believes that he’s the one that’s hurting Toga. This difficult realization makes Twice even more erratic than normal. He’s a character who’s always stuck in some level of an identity crisis, but “Sad Man’s Parade” depicts him at his very worst. And then he reaches peak performance.

This glimpse of the villain’s rock bottom is only fitting since the episode largely fills in the blanks surrounding Twice’s origins. This information is satisfying and helpful regarding Twice’s future, but it feels even more appropriate following the looks into Shigaraki and Toga’s backstories that have been provided in the previous installments. This “My Villain Academia” arc continues to unpack the layers on My Hero Academia’s deadliest characters and “Sad Man’s Parade” results in another disturbing, emotional home run for the anime.

There’s a compelling juxtaposition in play through “Sad Man’s Parade” between Skeptic’s control over his puppets and Twice’s own duplications and how these comparable abilities contrast in slight, yet vital ways. Ideally, Skeptic wishes to absorb Twice’s Quirk and have a replication and puppet Quirk that’s even more advantageous than what he currently wields. This sinister master plan involves eradicating what’s left of Twice’s fractured mind so that his Quirk can be used to proliferate Re-Destro and make a whole team of copies for this volatile villain. So you know, it’s basically Multiplicity, but with a whole lot more genocide.

Every detail that’s provided on Twice’s past is fitting and succeeds in its mission to humanize this hyperbolized wild card from the series. Twice only started to clone himself in the first place because he suffered from crippling loneliness, not because he possessed any malevolent intentions to improve his Quirk. It’s such a simple, human piece of backstory that does more for the character than what a verbose monologue would provide. Twice is currently stuck in an incredibly dangerous situation, but the initial desires that push him down this path to villainy are highly relatable.

Much like with what’s learned about Himiko Toga in the previous installment, “Sad Man’s Parade” presents Twice not so much as an evil mastermind whose purpose is revenge as it paints him as a scared, hurt victim of circumstance. He finds comfort in the League of Villains because he’s vulnerable and without confidence, just like Himiko Toga, not because he’s fueled by a bottomless pit of rage. What’s just as moving as the circumstances behind the genesis of Twice’s Quirk is him finally regaining his confidence in the department. Twice has been paralyzed in fear over his Quirk after he witnessed some of his clones eliminate each other, planting seeds of doubt in his mind if he’s actually the original version of himself or just another clone.

This is some of My Hero Academia’s deepest material and “Sad Man’s Parade” provides Twice some closure in this area that’s incredibly cathartic and also allows him to passionately embrace his powers again as he gets his groove back. It manages to be just as inspirational as the moment when Shoto Todoroki takes ownership of the fire side of his Quirk and he moves out of the shadow of his father’s trauma, which is saying something for a secondary villain. It’s so satisfying when Twice’s clones are able to overpower Skeptic’s puppets and he can take solace in his powerful Quirk rather than allow it to control him through fear and doubt.

There’s a powerful symmetry to the episode where Twice’s growing confidence mirrors the unshackled nature of his Quirk, leading to the extraordinary culmination of Infinite Doubles. My Hero Academia wisely doesn’t undersell this moment and it’s a visual extravaganza as the streets are literally overrun with hundreds if not thousands of Twice copies. The icing on the cake is that the rest of the League of Villains can’t believe their eyes over Twice’s comeback.

A promotion may be on the way for the masked weirdo who seems to have left some of his emotional baggage buried under countless duplications. “Sad Man’s Parade” functions as a celebration of Twice, but also his strong connection with Toga and why they need each other. It ends with both of them more empowered than ever before and it makes both “Sad Man’s Parade” and last week’s “Revival Party” two complimentary sides of the same story.

This is Twice’s episode to win, but Dabi, Mr. Compress, and Spinner get to show their skills against the Meta Liberation Army’s ice-based Geten. The battle brews in the background and it still offers some fun variety that breaks up the episode’s focus, but it’s largely inconsequential. It just provides more stunning action and an opportunity for Twice’s story to breathe. The final stage of Twice’s plan where Twice produces clones of Shigaraki, Dabi, and Mr. Compress is the perfect climax to all of this even if Re-Destro’s Tetsuo-esque Akira powers make swift work of them.

Re-Destro and Clone-araki’s fight is brief, but well choreographed and benefits from how it’s just as much a battle of values as it is of Quirks. Re-Destro continues to preach over how the very perception of Quirks in society is broken and beyond repair. On that note, it also sounds like Yuki Hayashi’s theme music for Re-Destro kicks in once he reveals his motivations to Shigaraki and it’s a heavy, intimidating tune.

There’s a broad vein of wild comedy that runs through “Sad Man’s Parade,” but it’s also a surprisingly brutal episode that doesn’t shy away from the visceral nature of breaking Twice’s arms and legs, as well as what nearly happens to Toga. My Hero Academia has steadily grown more adult, especially with how far it’s willing to go with its violence, but it means even more that this prolonged focus on the villains doesn’t present a sanitized version of the anime’s action.

Similarly, Shigaraki and Twice are so specific over how they’re the ones to kill Re-Destro and that they want his death to be personal. Their involvement in his execution is as important as the outcome. It’s significant that they’re reached such a place of animosity and aggression for their enemies. Shigaraki currently seems to exhibit more hostility towards Re-Destro’s Meta Liberation Army than he does for All Might and U.A. High’s heroes, which is fascinating.

Every time that My Hero Academia devotes an episode’s worth of backstory to a character it runs the risk of spoiling what makes that individual compelling in the first place, yet “Sad Man’s Parade” is an effective example of how character development and plotting can work together. Twice suddenly evolves from a loose cannon into a top tier villain in a manner that doesn’t just feel believable, but is also genuinely inspirational. The series’ prolonged shift in perspective over to the bad guys continues to be one of My Hero Academia’s best decisions. The stakes that surround the conflict between the League of Villains and the Meta Liberation Army are so engrossing that a return to Deku’s schoolyard shenanigans suddenly seem a lot less important.