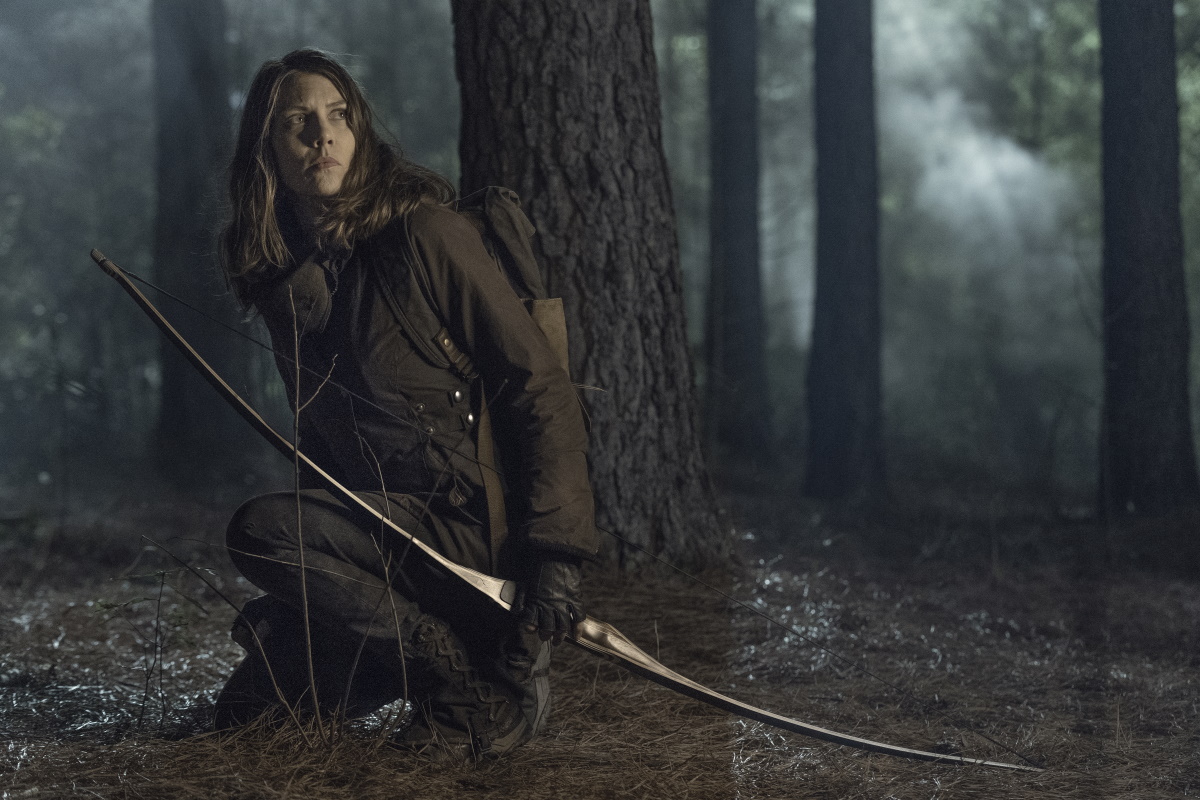 “Hunted” opens in a flurry of action. Blades and arrows come flying in out of the darkness. Most of Maggie’s companions stumble and fall, as do their hunters. Some get back up and scramble away towards safety, or in pursuit of someone. Most don’t. At least, not until they presumably turn into walkers and join the omnipresent background noise of the undead. As far as cold openings go, this one runs hot, and while it burns itself out quickly, it’s a perfect set-up for the following episode, which features The Walking Dead in hunting mode for both the A plot and the B plot.

At the center of both plots is hunger. Everyone in Alexandria is hungry, slowly starving to death as rations peter out and the fields fail to provide enough to sustain the population. Maggie’s mission to rescue a cache of supplies is a desperate one; if she fails, people die. Carol’s mission to rescue Alexandria’s horses is another desperate one; if she fails, people die but slower. Both have been established as crucial to survival, and both come with complications. For Maggie, it’s injured baggage, an old enemy, and people trying to kill her. For Carol, it’s something even more out of her control in the form of giant wild animals that don’t want to get caught and dragged back to civilization.

With every encounter with the Reapers or every fleeing horse, both missions seem increasingly hopeless. You can’t catch a horse that doesn’t want to be caught, especially when you’ve got no real experience in doing that kind of thing, and you can’t liberate a bunch of food supplies and get them back to your people if you’re all dead on the side of the road. But Maggie and Carol both persist, pressing on with their respective missions even when other, cooler heads suggest turning back, taking a break, or giving up entirely.

There’s a certain degree of single-mindedness at play for both characters. Maggie sees one way out, and there’s no way that she can deviate from the path, even when deviating from the path is the best thing to do. She’s a leader, so she’s stubborn and used to getting her way no matter what, and while she’s a good person according to Alden, good people don’t always make good leaders, and there has to be some ability to be flexible to accomplish a goal when complications arise. Maggie, as things continue to go wrong, fails to find that flexibility and it costs her pretty much everyone in her entourage save the last person she wants to have at her back, despite their growing agreement with one another.

Maggie’s desperation makes complete sense, and it’s established in pretty much every visual shot of the character, from her flailing around in the action sequence in the cold opening to her waking up from the attack and trying desperately to get away from the people chasing her by breaking into an abandoned mall. Frederick E.O. Toye does a wonderful job of isolating Maggie from the rest of her group, putting her in danger, and making it so she’s only got her wits and cleverness to survive. It’s impressive, at this point, to put a character this competent into peril and make it feel legitimate, but Lauren Cohan’s paranoia and fright does a wonderful job of selling this and Toye and director of photography Duane Manwiller make great use of Cohan’s expressiveness.

The scene in which Maggie drops her flashlight while disposing of an attacker is really well done, but the capper for it is when she feels like she’s finally safe, only for there to be a presence in a ghost mask behind her. That flick of a lighter to illuminate that scene was beautifully done, and it’s edited crisply enough that the attack doesn’t lose impact. It’s just enough to provide a very effective jump scare, leading into a couple of other decent scares further down the line. It’s a refreshing bit of horror after three episodes of mostly action-adventure with horror elements, and a fun call-back to the Whisperers mode of attack.

Maggie doesn’t know any way other than forward. She has her mission, and she’s sticking to it, even when Alden (Callan McAuliffe), Negan (Jeffrey Dean Morgan), and others try to talk a little sense into her. Lauren Cohan does a solid job of portraying that brittle iron will from Vivian Tse’s script. Maggie is strong and a leader, but she’s getting closer and closer to her breaking point as she tries to do anything to get herself back home with food enough to keep everyone, Hershel included, alive. She might die in the process of trying to do it, but that’s all she has left.

Carol has her mission, and while she has other things she could be doing, she’s fixated on the horses and recovering them, because it’s easier than facing the very real possibility that you did everything you could and everyone still died. Melissa McBride, through the course of the past several seasons, has carried the show, and now when she’s given the opportunity to put together a good performance, she still shines, and she has good chemistry with Angel Theory’s Kelly.

All three women have their hope, the mission they’re clinging to, and there’s not really much alternative for any of them in the greater world. Maggie has to get to the supplies, or everyone will die from lack of food. Carol has to get the horses back, or everyone will die from overwork (or lack of horse meat). Kelly has to hold out hope that her sister will come back, or she’ll give up and probably die, too. Food is important, but hope is equally as important in this hardscrabble world.