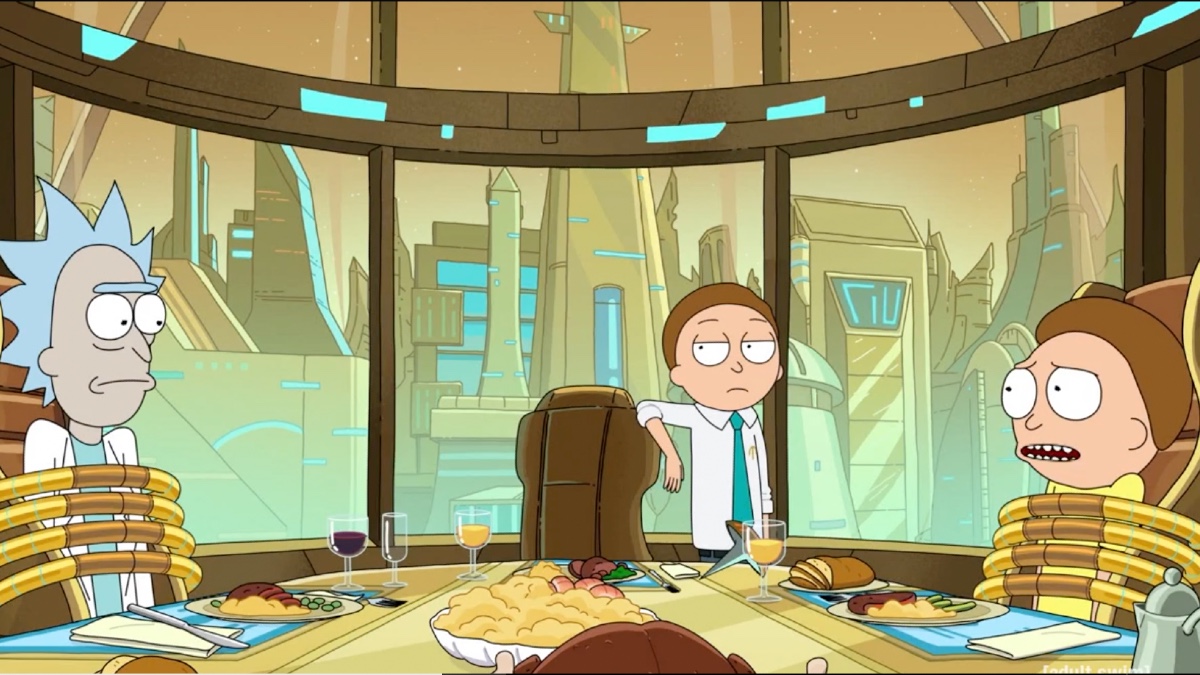 This article contains spoilers for Rick and Morty season 5 episode 10.

Rick and Morty is fighting a losing battle with its own canon.

The show has demonstrated time and time again that it prefers crafting episodic, self-contained stories to fully realize the potential of playing in a massive sci-fi sandbox. Like Rick Sanchez himself, the writers of the show understand that infinite universes (and a hefty 70-episode order from Adult Swim) means that a concept as earthbound as “story” will soon become pointless.

Viewers, however, have never felt that way. Despite being presented with the promise of infinite creation, many Rick and Morty fans just want to follow the story of the world’s smartest, yet most damaged man, and his happy-go-lucky grandson. It’s all quite ironic. Rick and Morty co-creator Dan Harmon has spent much of his career advocating for the elemental power of storytelling, even crafting a “story circle” that is now a feature of many writers’ rooms (and probably the Marvel Cinematic Universe). But now the one time a Harmon writers’ room wants to have some non-serialized fun, fans crave structure more than ever.

And fans finally get that structure in the Rick and Morty season 5 finale “Rickmurai Jack.” Several writers promised before the season that this batch of Rick and Morty episodes would be more canon-focused than years’ past. Sure enough, this finale explains…just about everything in the Rick and Morty canon! You can tell it’s all canon too because Rick loudly proclaims it over and over again with lines like:

Rick and Morty fans finally get just about every bit of canon they’ve been clamoring for from “Rickmurai Jack.” And in case you missed any of it, we will explain it all. Because that’s what we do.

What Is Rick’s Origin Story?

Rick Sanchez is clearly ashamed of his origin story. We finally find out why in this episode because it’s all so…human. Yes, as the series has long intimated (first in season 3’s premiere and then again in season 5 episode 8), the beginning of Rick’s multiverse-jumping saga begins with “sad about dead wife.”

Once upon a time, an evil (or probably just normal) Rick dropped into Rick C-137’s timeline to invite him along on multiversal adventures. When C-137 declined, the asshole Rick dropped a bomb into his garage killing his wife Diane and daughter Beth. Despondent, C-137 built his first rudimentary portal gun and traveled every possible timeline and dimension looking for revenge. In the process, he killed thousands upon thousands of his fellow Ricks but never found the Rick he was looking for.

Eventually, Rick grew tired of all the bloodshed and founded the Citadel of Ricks so that all the Ricks could live in relative peace. He then traveled to a timeline with a new Beth and settled in for a lifetime of adventures with his little buddy Morty.

What is The Central Finite Curve?

The Citadel of Ricks wasn’t the only thing that Rick C-137 and his fellow Ricks created. Have you ever wondered how, in an infinite set of universes, Rick Sanchez just so happens to be the smartest creature in each one? If the universe were really infinite, then wouldn’t there be dimensions where a Morty, a Jerry, a Beth, or even some random beetle was the smartest creature alive?

It turns out that the Ricks wanted to make sure there was no Genius Jerry universe. They’ve walled off their own set of realities from all the other realities. Using a concept known as the “Central Finite Curve” they’ve been able to isolate only the universes in which Ricks are the smartest creatures to use as their own Rick playgrounds. How did Doofus Rick sneak in then? That’s anyone’s guess.

What is Evil Morty’s Whole Deal?

Evil Morty makes his triumphant return in this episode. First introduced as a one-off joke all the way back in season 1, Evil Morty has now become arguably the most mysterious and important figure in the Rick and Morty canon.

Previously we saw Evil Morty elevated to the position of President of the Citadel and now we see why he wanted the job. Evil Morty wants to break free from the Ricks’ Central Finite Curve. He no longer wants to live in a set of curated universes where Rick Sanchez will always win. Ultimately he gets what he wants as the final moments of this episode find him entering into a new set of dimensions, 2001 or Interstellar-style.

Evil Morty scores his biggest win of the series yet but it’s still unclear where the little guy even comes from. Is it possible that he hails from a different dimension of smart Mortys to begin with? Maybe. But we think it’s more likely that Rick and Morty is operating under Jurassic Park rules: life finds a way. The Ricks tried to create a walled-in universe where beings like Doofus Rick or Evil Morty aren’t possible. Unfortunately for them, infinite universes aren’t so easily tamed.

How Cool is Ant-Man and the Wasp: Quantumania Going to Be?

So cool. This may seem like a weird digression but keep in mind that the writer of this finale, Jeff Loveness, is also penning the next Ant-Man and the Wasp movie that will find Jonathan Majors’ Kang the Conqueror making his MCU film debut (after previously popping up in Loki).

In fact, this was Loveness’s last episode on Rick and Morty before heading off to Marvel-land.

What Has Mr. Poopybutthole Been Up To?

After becoming a fan favorite (and sustaining a near-fatal gunshot wound) in season 2, Mr. Poopybutthole has retreated to the background of the Rick and Morty world. Now he operates as an Oatu-like Watcher, dispassionately viewing the events of Rick and Morty from his couch, sometimes wistfully wishing these mortals could see what fools they be.

Mr. Poopybutthole’s monologue at the end of this episode is particularly haunting. Here is the script page in its entirety courtesy of Loveness’s Twitter account.

“We don’t have as much time as we think. We never do. Oooowee.”