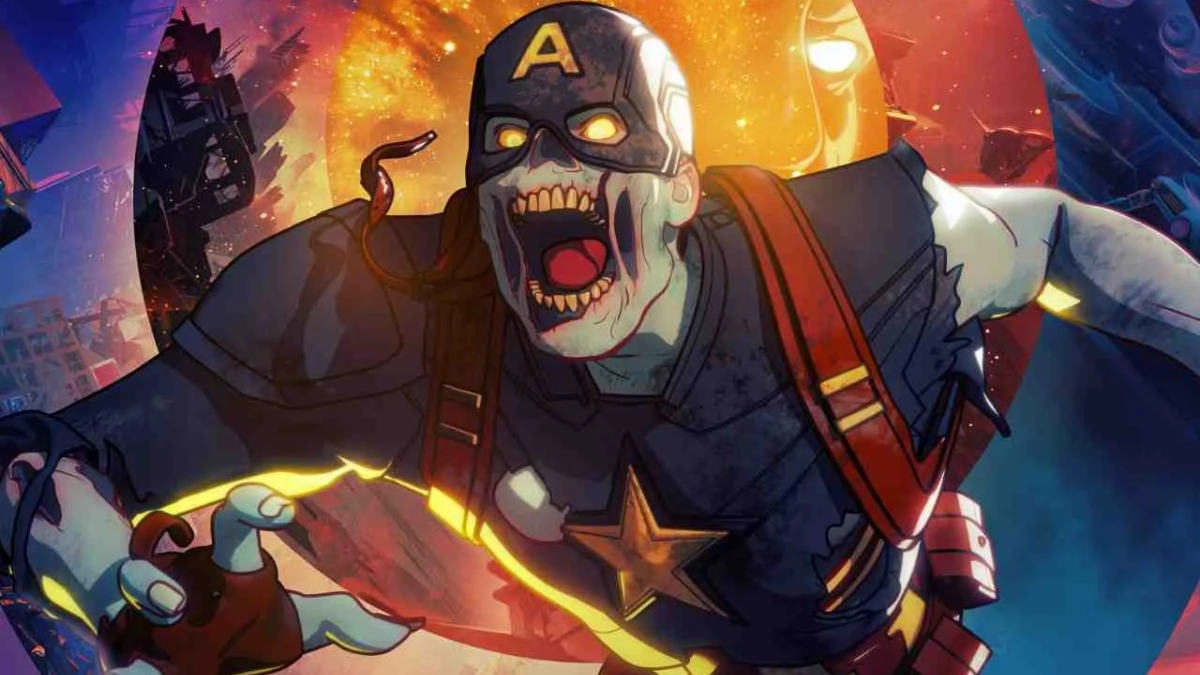 This article contains spoilers for Marvel’s What If…?

Man, Marvel’s What If…? series really does draw you in with a false sense of security, doesn’t it? The first episode is an adorable romance story laced with punching Nazis. The second is a tribute to a late actor in the form of galactic utopia. Then we get the Avengers being murdered, the universe being melted, and now Captain America eating human flesh. Enjoy your nightmares, kids!

The fifth episode of What If…? is a bit of a fanservice choice. For the latter half of the 2000s, Marvel was riding the Marvel Zombies train like nothing else.

While the first use of the concept came in 2005, one could consider What If…? v.2 #24 (What If Wolverine Was Lord of the Vampires?) to be the prototype. The story involved Dracula turning the X-Men into vampires, but Wolverine’s healing factor allowed him to overwhelm Dracula’s control and fight back. He then littered New York City with vampire heroes and humanity’s last hope came in the form of the Punisher wearing Dr. Strange’s cape.

The first real use of Marvel Zombies was more of a prank than anything else. Mark Millar and Greg Land were doing Ultimate Fantastic Four and all signs pointed to the idea that they were setting up a crossover. Not just any crossover, but THE crossover. Marvel had been adamant about the Ultimate Universe being separated from main continuity, but solicitations and covers made it seem like the two Reed Richards counterparts were going to meet up. Much of Ultimate Fantastic Four #21 played into this with Ultimate Reed conversing with an alternate universe Reed who very much resembled the mainstream one. Ultimate Reed created a portal to go visit him.

What he found was zombie incarnations of the Fantastic Four with Reed asking, “Ever had the feeling you’ve been had?”

The rest of the arc was about Ultimate Reed trying to survive and escape that world with the help of that world’s Magneto. This set the stage for the first Marvel Zombies miniseries, written by The Walking Dead’s Robert Kirkman with art by Sean Phillips (Arthur Suydam did zombie parody covers of classic Marvel art, which would continue for several more miniseries). Initially, Kirkman wanted to do a story about Luke Cage being the last hero alive, playing up his unbreakable skin as a deterrent, but since the Ultimate Fantastic Four arc already depicted Zombie Luke Cage, that was off the table.

Instead, his story involved two main arcs. One was the survival of Black Panther, who – much like the animated What If…? episode – was kept alive, albeit with his limbs being gradually removed for the sake of being zombie food without infecting the body. While the cartoon had Scott Lang’s disembodied head, the comic had a decapitated Zombie Wasp as Panther’s ally. She was never cured of the disease, but she did stop being hungry after a while and came to her senses.

The other story was about Earth’s zombified heroes dealing with the coming of the Silver Surfer and Galactus. A handful of them went on to devour the invaders and absorb their cosmic powers, along with their cosmic hunger. Hank Pym, Iron Man, Luke Cage, Wolverine, Spider-Man, and the Hulk went on to wipe out nearly all life in the universe as the Zombie Galacti. The follow-up was the basis for Marvel Zombies 2.

As for what caused the zombie outbreak in the beginning, that’s where things get a little hairy. The Ultimate Fantastic Four story revealed that a Zombie Superman (recolored to be the Sentry so as not to piss off DC) got so hungry that he punched reality until breaking into an alternate universe and infecting its heroes.

Kirkman and Phillips did a one-shot prequel called Marvel Zombies: Dead Days that suggested that Magneto bartered with some force to unleash the virus on Earth, thinking that it would only target humans and not mutants. Then a later miniseries called Marvel Zombies Return created an alternate universe time-loop where the zombies from Marvel Zombies continuity ended up in another universe, where they caused an outbreak, infected that world’s Sentry, and Zombie Sentry ended up popping into the Marvel Zombies universe to cause the initial outbreak.

Did anybody follow that? I hope so. Either way, Zombie Sentry was never mentioned again. He infected the heroes and then…nothing. Just a loose plot thread. Weird. Though fitting that the Sentry stopped being a threat because people forgot about him.

The initial Marvel Zombies universe was revisited here and there in several ways. Black Panther’s comic (during when he was leader of the Fantastic Four) journeyed into that universe and dealt with the Zombie Galacti. Ash from Army of Darkness got his own cool crossover miniseries taking place during the initial outbreak. Zombie Wolverine showed up in an Exiles story about a team made entirely out of Wolverine variants. Zombie Deadpool (Headpool) became a major part of the short-lived Deadpool Corps. Marvel Zombies also did a crossover with Marvel Apes.

There was also a one-shot called Marvel Zombies Halloween that revealed that Kitty Pryde and her son survived, while also showing what Mephisto was up to in this reality.

With Marvel Zombies 3, Fred Van Lente started writing and brought the series in a different direction. He introduced ARMOR, a SHIELD offshoot based on dealing with alternate realities. While it still dealt with the Marvel Zombies universe, focus was more on the mainstream Marvel universe as it tried to prevent an invasion. The protagonists for the story were Machine Man and Jocasta. In the follow-up, Marvel Zombies 4, Morbius brought the Midnight Sons back together to save the world from a possible outbreak.

Van Lente’s swansong was Marvel Zombies 5, which was about Machine Man and Howard the Duck venturing into different zombie universes for reasons. After that came Marvel Zombies Supreme, taking place in regular Marvel continuity and featuring Battlestar and Jack of Hearts fighting zombie versions of the Squadron Supreme. Then came the last gasp for the line with 2012’s Marvel Zombies Destroy, where ARMOR sends Howard the Duck and Dum Dum Dugan to fight an alternate reality filled with zombie Nazis.

They did get a shot in the arm a few years later with Secret Wars. The event featured a world made up pieces of alternate Earths, haphazardly connected together. There’s a No Man’s Land on this Earth that’s filled with zombies and homicidal robots. It’s basically a place to dump criminals for execution.

A couple more stories were released, though neither had any connection to the original Marvel Zombies or the stuff with ARMOR. Marvel Zombie was a one-shot about a band of heroes trying to survive a zombie apocalypse, who end up teaming with Simon Garth, Marvel’s Zombie. The ending is…well, it sure is something.

More recently is Marvel Zombies: Resurrection. This one is about the Brood infesting and killing Galactus. The race evolves into a hivemind of zombies, all very interested in infecting Franklin Richards. The heroes for this one include Spider-Man, a Sentinel reprogrammed to be Franklin and Valeria’s nanny, a blind Wolverine, a techno-organic Frank Castle, and a SUPER EXCITED Blade.

Also of note is Marvel Universe vs. The Punisher and its sequels (Marvel Universe vs. Wolverine and Marvel Universe vs. The Avengers). This reality also dealt with a zombie superhero apocalypse, but in a different and more coherent way. Instead of being a virus, it was a bio weapon let loose into the ecosystem. That meant that presumably everyone was going to succumb to it eventually, turning into a savage cannibal. The Punisher, who was inadvertently behind the mess and was immune, would spend his days hunting down and beheading heroes. Also, he’d have to kill Deadpool on a nearly daily basis.

That’s Marvel Zombies in a nutshell.