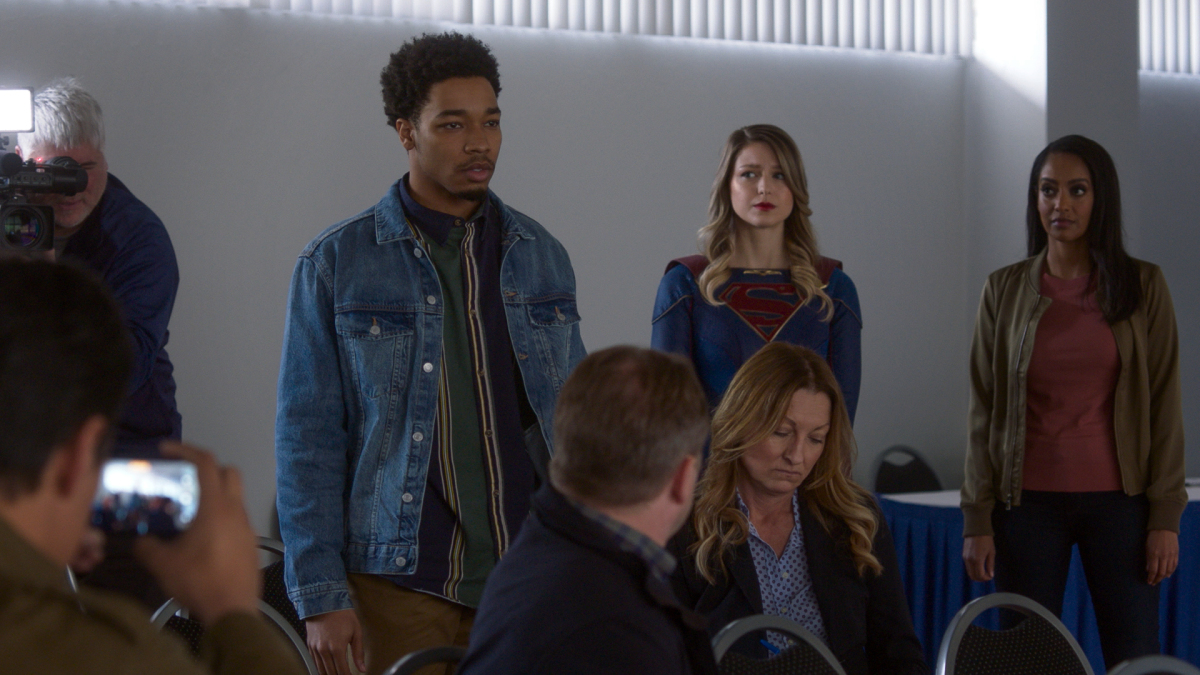 This episode felt simultaneously packed and like it barely moved along. Suddenly Nia, Nyxly and Orlando’s stories were all off to the races at once, and with Supergirl’s journey using her public platform as the main thread, there’s still so much left to cover. It felt like a possible backlash against Supergirl may have been left on the cutting room floor, and it was never really clear if that veggie promo went viral in a good way or a bad way, because every time someone mentioned it their reactions were cut short.

In a welcome move, Orlando and Joey’s story continues. In something of a meta commentary, Supergirl’s writers have figured out that if they’re going to tackle a series of systemic issues, it’s better to filter them through the same pair of siblings over the course of a few episodes, rather than packing in new backstory and trying to get us to care about new people each week. And unfortunately, it’s all too real that folks who have interacted with one of these systems (foster care, prison) have had touchpoints with others (affordable housing, eviction, gentrification, recidivism).

The show’s take on housing rights is fairly sophisticated, in that it involves the concept of low-income housing for returned citizens, a critique of gentrification, and the impact that housing can have on many other aspects of life, from recidivism to family reunification, e.g. Orlando’s quest to get Joey out of the system. Kara’s arc here is a bit of Allyship for Dummies, but it’s a vast improvement over the previous episode, and there are probably still plenty of people who need to hear lines like “my voice isn’t what’s needed right now,” “sit with your discomfort,” and “maybe I step aside and give my platform to someone else.”

It is a bit weird that this activism is coming top-down from Supergirl – realistically, no community development project like this would have unanimous approval – but at least in this episode, the writers clearly know it. People of color who actually live in that neighborhood hopped on that livestream and let Supergirl know exactly how they felt about a blonde alien telling them what’s best for them. Ultimately that community discrepancy (and that all-white city council) weren’t addressed, but it seems like Supergirl will be staying with Orlando and Joey’s story for a while, so perhaps we’ll be hearing more about that.

Supergirl adroitly brings back one of the alien “zookeepers” from the flashback episodes. Back then, Brainy, Nia, Kara, Alex and their high school friends took on Mitch and Naxim, eventually sending them right into a DEA trap in South America. Here, the pair have split, and one half of the delinquent duo teams up with Nyxly, whom he catches in the hopes of impressing his former compatriot so that they can start up the menagerie again. She then charms her way into working with him to set a trap for Supergirl.

It must also be noted that Kelly’s journey toward Guardian continues to be strong, and her training sequences are even stronger. It’s great to see Kelly continued to be tied into the rest of the stories and her buddy cop vibe with Kara is wonderful. As you were, Dansen.

As far as Nia’s deal with the devil – or an imp, as the case may be – it seems a offsides for Nyxly to add multiple conditions after the fact. Omitting her bad blood with Supergirl is expected from a character who always keeps her deals and sticks to the letter of the law, but leaving out the fact that Nia won’t be able to leave the room or communicate with anyone outside of it is pushing it. Mxy would never.

Nia’s time with her mother brought about some long-overdue lessons about interpreting her dreams and, more importantly, being true to herself. The vision Nia had about Maeve was a tough one, and I’m glad her mother referred to it as grief. Nia lost her sister to Maeve’s transphobia and in addition to the pain of Maeve’s mistreatment, there’s also the real loss of her sister to mourn, and the way Nia made herself small in the hopes that it would somehow convince her sister to work through her own issues. I expect we’ll see some sort of reunion between the two sisters, though I’m wary – Nia doesn’t have anything to apologize for, and she isn’t obligated to welcome her sister back into her life, either.

Almost immediately, Isobel told Nia key pieces of information: never exit a dream in fear, and there are no distractions in the dream realm because everything has meaning. Considering Nia ends almost every dream by waking up stressed out, thank goodness she got to see her mother, even if it came at a price. Hopefully what she learned will kick-start her development even further. Nia repelled Nyxly using very strong power – possibly stronger than she knew she had? She certainly surprised the imp. It will be interesting to see where Nia goes from here. We know from Brainy that she is far more powerful than she even realizes, so hopefully we get to see some of that soon.

In a refreshing surprise, Kara applied her life lessons about supporting formerly incarcerated folks and the various factors that lead to recidivism to Mitch, rather than keeping the sociopolitical lesson bound to one plot. Few superhero shows have examined their role in the carceral system, with the Flash creating his own private prison for meta humans and Oliver Queen’s interest in prison reform drying up rather quickly after he returned home himself. With a character like Mitch, it would be easy to keep things light and fluffy. Instead, Supergirl used time travel to show the long view of recidivism and the fallacy of prison-as-rehabilitation, in the space of just a few episodes.

On the bright side, we can all look forward to the return of Mxyzptlk!

Batman: The Doom That Came to Gotham | Trailer | DC
Best Nintendo Switch Settings You Should Be Using
Dead Space Remake Release Time: When Will the Game be Playable?
Dave Bautista Has Talked to James Gunn About Future DC Movie Plans
The only way you’ll get me to run is if a Allosaurus is chasing me.🦖 #short #shorts #scifi