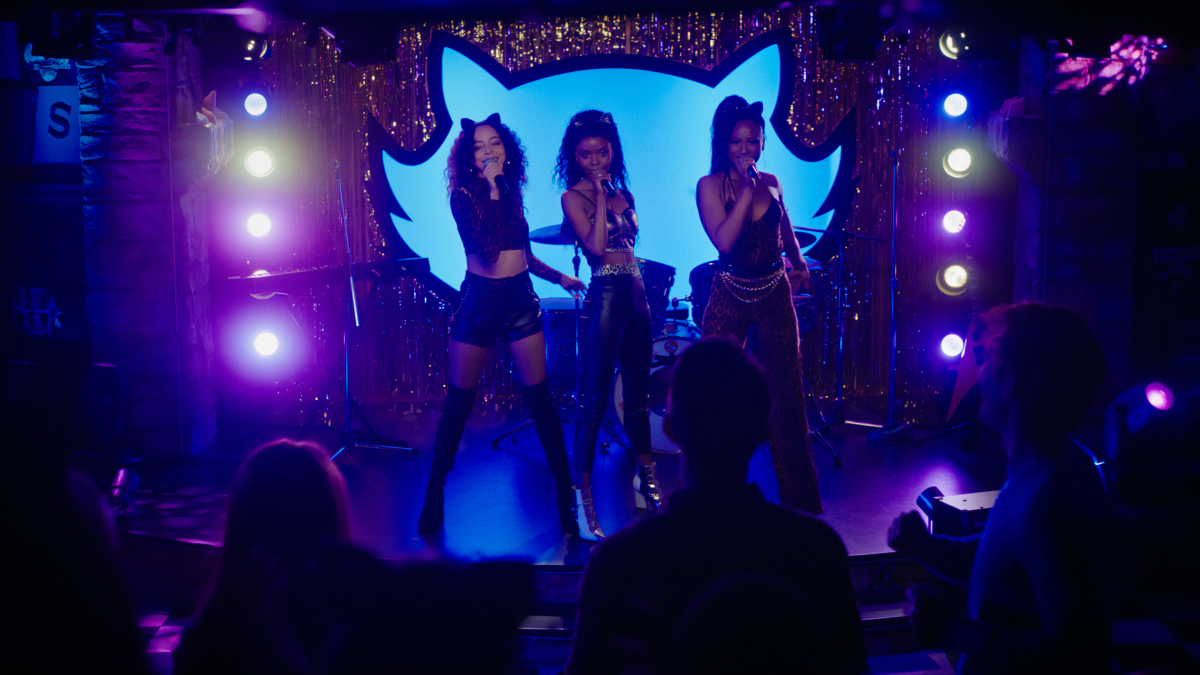 “Our story is about three young women bursting with talent.”

When last we saw Josie McCoy (Ashleigh Murray), she was in New York City trying to make her dreams come true on the ill-fated (and gone-too-soon) Riverdale spin-off Katy Keene. Often when characters are spun-off and their subsequent shows fail, they vanish into the pop culture ether — The Ropers from Three’s Company being the textbook case of this phenomenon. But not so for Josie. This latest episode debuts a new iteration of the character, one who has achieved her dreams but still finds herself wanting more. It is a decidedly more mature take on the previously underwritten character, and one that allows Murray’s considerable acting and musical abilities to shine.

In short, it is the Josie that fans have always wanted to see.

But what good is the character without the backing of her Pussycats? Drummer Melody Valentine (Asha Bromfield) and multi-instrumentalist Valerie Brown (Hayley Law) have been estranged from Josie since she blew off the Pussycats for a solo career when they were in high school. Seven years later and the wounds are still raw, even though Melody has since become a renowned author with movie rights optioned by Tyler Perry, and Valerie is a talented artist and actress.

When Josie returns to Riverdale to take stock following the sudden death of her father, she finds herself coming to terms with her past. More than that though, she has found her voice in every sense of the word. She dismisses Mr. Lodge, the show’s big bad in a hilarious kiss off that sums up many viewers’ opinions on the often irksome character. Better still, the episode allows her to get meta to discuss how Riverdale often sidelined the Josie character in her previous iteration on the series. “I didn’t have much to say in old times,” she plaintively declares, commenting on the problem that Riverdale had with diversity in its early seasons. She then accurately dismisses Archie, Betty, Veronica and Jughead not as old friends but as acquaintances. It’s a bold and surprising scene that takes responsibility for past sins that the series committed, further illustrating that it is aware that it can do better and has been attempting to do so.

After a steamy reunion with old flame Sweet Pea (Jordan Connor), Josie begins the work of reaching out to Valerie and Melody. It is here that the episode goes from great to an all-timer. The chemistry that Murray, Bromfield and Law possess is lightning in a bottle. As old injustices are aired and attempts to repair wounded hearts and egos are undertaken, these actresses embody the old friends they portray fully. But this backdoor pilot, fortunately, has zero interest in having its women of color tear each other down. The characters candidly discuss their shared past, and begin to repair the rift that will — if The Pussycats goes to series — lead them to becoming the global superstars they are destined to be.

Josie, Melody and Valerie are icons. They know it, and the world will soon follow.

Inspired by her renewed friendship with her once and future bandmates, Josie decides to do a concert with the Pussycats that will raise money to help reincorporate the town of Riverdale. It is a performance that highlights each of the women’s musical strengths, even if Josie does steal the spotlight for an emotional rendition of Nina Simone’s “Stars.” Despite being cut short when Toni goes into labor, the concert is enough of a success for The Pussycats to agree to go on the road together — playing in towns where Josie’s late father wanted his ashes scattered. The women consider themselves to be equals now, thus the “Josie and” is jettisoned from the band name. This still being Riverdale, a friend of Josie’s dad appears moments before she leaves town to tell her that her father may have been murdered in New Orleans, and that voodoo might be involved.

With this incredible/ridiculous plot development thrown at us, the full image of what The Pussycats will be as a series comes into view: A mixture of Fame and 13 Ghosts of Scooby-Doo that celebrates these characters and their comic/cartoon legacy in an unexpected way. (As an Archie comics historian even I was taken off guard by the last-minute introduction of the potential show’s mystery angle, and my mind reels at the possibilities).

Hopefully sooner rather than later a series order for The Pussycats will be announced. There is so much potential here to tell exciting, fun, music-packed stories featuring strong women of color that it feels like a surefire hit. “The Return of the Pussycats” is not only the best episode of Riverdale this season, but a perfect pilot episode. There desperately needs to be lots more long tails and ears for hats in our future, for these are the Pussycats we’ve been waiting for.

Dead Space Remake: How to Unlock and Survive Impossible Mode
The Witcher Season 1 Episode 5 “Bottled Appetites” | AfterBuzz TV
How Did the Cordyceps Infection Start In The Last of Us Games?
Dead Space Remake: Where to Find Every Schematic
Marvel Studios’ Ant-Man and The Wasp: Quantumania | Before