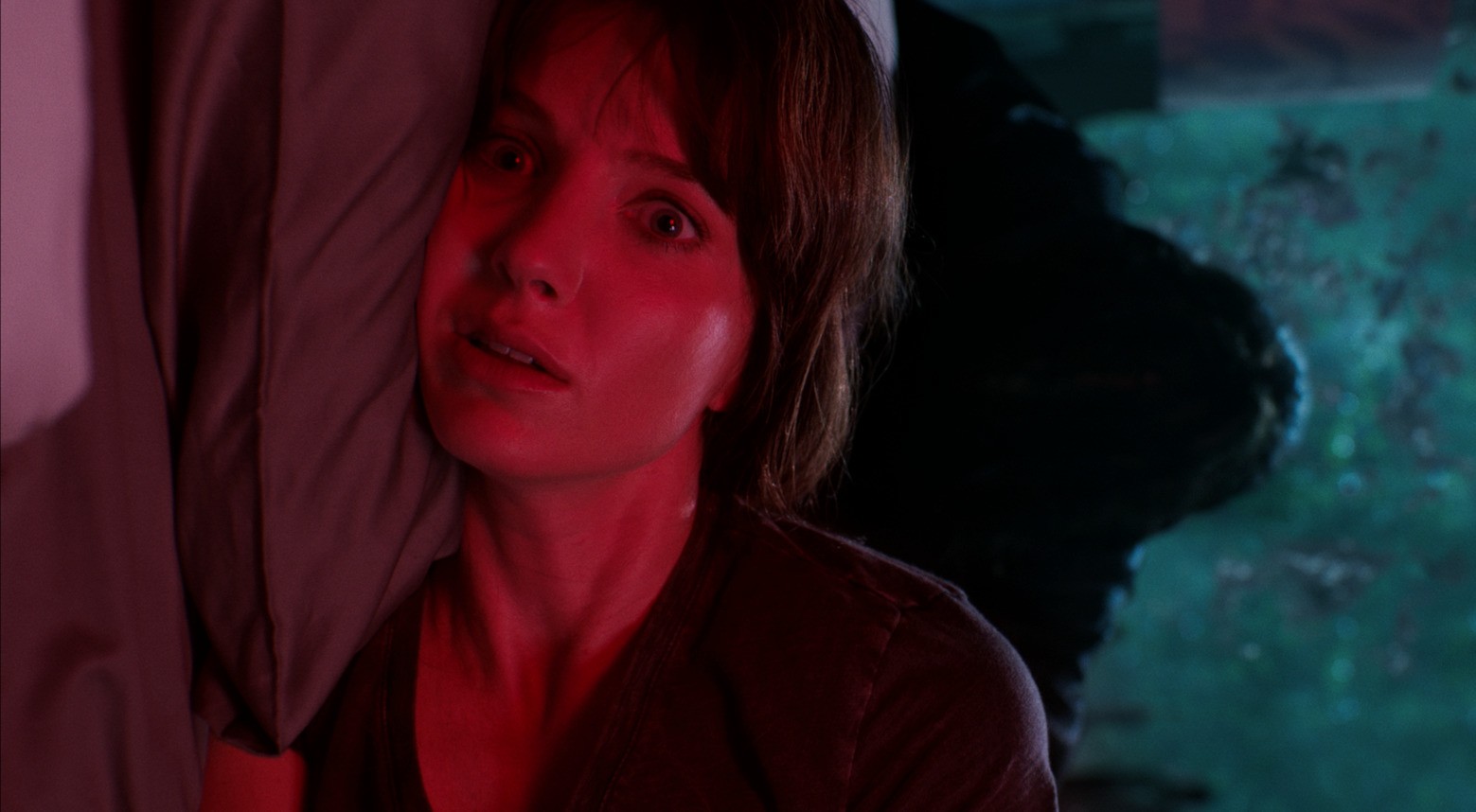 Malignant has a twist so wild you need to see it to believe it. Seriously, stop reading right now if you have even the faintest interest in watching James Wan‘s latest horror offering. You really don’t want to spoil this for yourself. Sure, you’ll either really love or absolutely hate the movie’s batshit third act, but the experience of watching the twist for the first time is worth the price of admission.

If you have watched the movie, maybe you left as astonished as I did. After all, the first two thirds of the movie play like a standard giallo-inspired slasher film before things go completely off the rails. You might say that some of the clues were there all along — indeed they are, maybe you saw this coming from a mile away — but when you thought you’d put it all together, did you really expect Wan to go through with something so ridiculous? I certainly said, “No, that can’t be it” to myself midway through the movie when the clues started adding up. It’s a new direction for Wan to be sure…

But Wan’s first trip into a new sub-genre of horror isn’t necessarily without outside influence. There’s a bit of David Cronenberg mixed with hints of Dr. Jekyll and Mr. Hyde, but for the most obvious inspiration you have to look to the King of Horror himself.

Before we talk about Stephen King, you might be wondering what the hell was going on with Gabriel in the first place.

Safari Riot’s cover of the classic Pixies song “Where Is My Mind” seems so out of place when it first blasts through a scene in the movie, an over-the-top accompaniment to what seems like your standard slasher flick, but it’s actually incredibly appropriate — not just for the massive tone shift but the plot itself. (“Where Is My Mind” is also the iconic tune that accompanies the final scene of Fight Club, another tale of split personalities.) Madison’s (Annabelle Wallis) mind has been playing tricks on her (and the audience) the entire time. She thinks her creepy childhood imaginary friend Gabriel has somehow taken corporeal form and started murdering everyone who had a hand in “separating” him from her. But little does Madison know that the separation was much more literal than her simply forgetting a figment of her imagination when her baby sister Syndey (Maddie Hasson) was born.

It’s Sydney who discovers the truth when she goes back to the institution where Madison spent her early childhood before being adopted by their mother Jeanne (Susanna Thompson). In the basement of the abandoned Simion Research Hospital, Sydney finds the harrowing tapes that reveal Madison’s past with her “imaginary friend.”

Madison was born Emily May to a 15-year-old girl named Serena (Jean Louise Kelly as an adult, Madison Wolfe as a teen) who is forced to give her away to the institution by her mother due to Emily’s…medical condition. In a stunningly gruesome sequence of body horror, we learn that Emily was born with a parasitic twin attached to her head and spinal cord, which allows it to control her movements and thoughts. The doctors at Simion at first diagnose Gabriel as a “massive teratoma,” a malignant tumor that can grow with fully developed organs and tissue, but as we see in the movie’s opening sequence, they soon learn that this is something much worse and decide to cut him out off of Emily for good.

But they can’t get rid of Gabriel completely. Because the siblings attached at the brain, the doctors are forced to remove as much of Gabriel as they can, hiding what’s left inside her skull. Of course that means that Gabriel never truly goes away. He continues to speak to Emily, now Madison, from inside her head, at one point almost convincing her to kill Jeanne while pregnant with Sydney.

While Madison eventually forgets her “imaginary friend” as an adult, Gabriel returns after Madison’s piece of shit husband Derek (Jake Abel) brutally slams her head against a wall during an altercation. (Let’s just say I’m glad he’s dead.) The injury reawakens what’s left of Gabriel, who can reemerge through her head wound to control and contort Madison’s body and go on his killing spree. Madison experiences these murders as visions, as she watches her sibling slash his way through all the doctors that tried to destroy him as well as the mother who gave him away in the first place. Madison’s only able to stop him after he’s already massacred a police station full of cops and prisoners and made his way to the hospital to kill Sydney and Serena. Using the mental link she has with Gabriel, Madison manages to lock her sibling away, promising that next time he reemerges, she’ll “be ready for him,” setting up an inevitable sequel and a new horror franchise for Wan.

Gabriel and the Dark Half

Constant Readers will undoubtedly spend the weekend pointing out that Gabriel’s plot to control his sister in order to go on a murder spree is very reminiscent of one of Stephen King’s most famous books and movies, The Dark Half. The book and the movie directed by the late, great George A. Romero tells the story of Thad Beaumont (played by Timothy Hutton in the film), a writer of literary fiction in a bit of a slump by day. But he has a far more successful career by night as the author of dark crime novels under the pen name “George Stark.” Yet, the success of his Stark books feels like a curse to Thad, who is driven to heavy drinking and other vices when “the spell” of Stark’s prose. Now, a recovering alcoholic, Thad wishes to leave Stark behind and just write the literary fiction his agent and editor deem “boring.”

When the truth about Thad’s pen name comes out, the writer sees the perfect way to bury his career as George Stark once and for all — by throwing his pseudonym an actual funeral at the local cemetery. But Mr. Stark doesn’t like that very much. Thad’s pen name inexplicably “rises from the grave” to kill everyone he blames for his death — Thad’s editor, agent, and more.

You’re probably thinking it was Thad all along, but this is more than just another case of split personalities. Like in Wan’s latest, Stark was once actually very real, the sibling Thad absorbed in utero…except for a couple of teeth and an eye living inside of Thad’s brain. The “tumor” is removed from Thad’s head as a child, but he’s somehow unknowingly kept the spirit of his sibling alive through the books he writers, undoubtedly under Stark’s dark influence. It’s the kind of gory, supernatural twist King is best known for, and Wan sets out to celebrate the book with style. Mind you, this obviously isn’t a direct adaptation of King’s work but more like a spiritual successor to the book that pushes the plot much further into the ridiculous than even the writer did in 1989. Leave it to Wan to dream up an action sequence where a backwards (literally), contorting serial killer stabs his way through a building full of people to the sound of shredding guitars.

Even if you think Malignant‘s third act twist is an absolute mess, I’d argue it’s at least an interesting mess, a daring experiment in a corner of the horror genre we’ve not seen enough of in the past few years. Will this experiment lead to a new movement in body horror movies just as Saw for better or worse inspired years of “torture porn” movies and The Conjuring brought us the horror expanded universe? That remains to be seen. At the very least, Malignant is the kind of movie you’ll want to debate about with your friends as you exit the theater, even if it’s just to say you absolutely hated the twist. Aren’t you at least glad you saw it for yourself? The twist just isn’t as good on paper.

Malignant is out now in theaters and streaming on HBO Max.