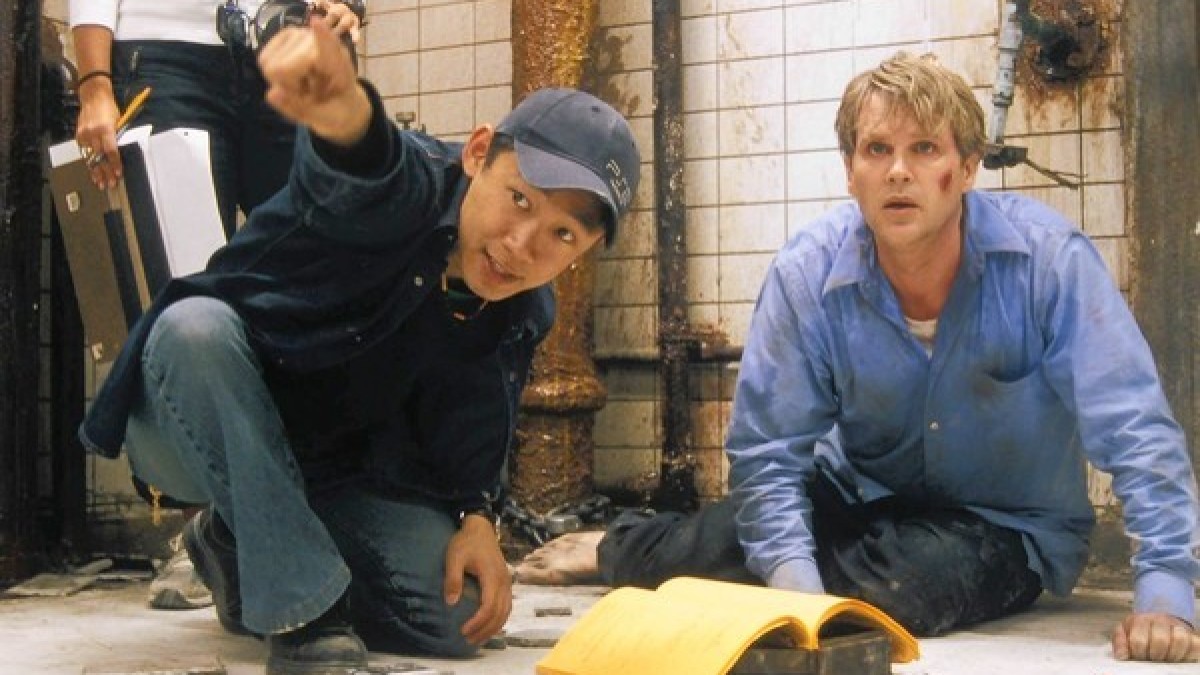 James Wan has a new horror movie out this weekend, and it’s been far too long since we’ve been able to write that. As one of the singular genre filmmakers of his generation, Wan managed to launch three successful and pop culture defining horror franchises in less than a decade between Saw (2004), Insidious (2010), and The Conjuring (2013). And yet, the Australian director hasn’t stepped foot in a spooky house since 2016’s The Conjuring 2. Moving on to bigger and (maybe?) better things in Furious 7 and Aquaman, Wan’s new status as a blockbuster director caused many fans to wonder if his days in dark shadows were done.

Which is why this weekend’s Malignant is such an inviting proposition. Five years after walking away from personally helming Ed and Lorraine Warren’s on-screen adventures, Wan’s returned to his roots with an original horror movie that’s not part of any franchise. What a novel concept. To celebrate this change of fortune, the editors at Den of Geek have put their heads together and voted, coming up with a definitive ranking of Wan’s horror movies. You can trust us.

Sometimes it takes a while to get back into the swing of things. While Wan deserves credit for championing an original idea in the modern world of sequels, prequels, and spinoffs—he even turned down helming The Conjuring: The Devil Made Me Do It for this!—daring gambles don’t always payoff for everyone. Which might be a polite way of saying that for some of us (although not all), Malignant is a disappointment.

Built entirely around a plot twist we’re not going to spoil here, Wan’s Malignant takes the familiar concept of a protagonist (Annabelle Wallis) being wrongfully accused for supernatural crimes, and turns it on its head. The actual twist however has left folks divided. Some applaud how bold it is while others of us found it fairly underwhelming, and lacking a satisfying subtext or cohesiveness to make it worthwhile. We’re all in agreement though, it’s a stylish bit of eye candy… and that Wan’s done better before. – David Crow

As the second installment of Wan and frequent collaborator Leigh Whannell’s Insidious franchise, there was a lot of anticipation over how this horror sequel would follow-up on the cliffhanger ending to the first film. If you don’t recall—and here there be spoilers, by the by—that movie ended on the shocking revelation that Patrick Wilson’s repressed and mild mannered father, Josh, had become possessed by a ghost which has been chasing him since childhood. Worse, this spirit caused him to kill Lin Shaye’s delightfully kooky Elise! (Don’t worry, her soul gets better.) What will happen next to the poor Lambert family?

Something a lot more rote, as it turns out. This is not to say that Insidious: Chapter 2 is a bad movie; it’s simply a much lesser one than what came before. From the film doubling down on a monster not nearly as intriguing as the Lipstick Demon from the first film to the picture failing to expand on the strange astral plane of the Further in a meaningful way, Chapter 2 is just a tad underwhelming—a horror follow-up going through the motions. Still, it allows Wilson to play secretly evil, so that’s fun! – DC

Dead Silence was DOA in theaters and critically panned when it debuted in 2007, yet after the movie became available as a home release it scraped together a small audience that was mostly composed of very specific genre fans: those who are just plain shit scared of ventriloquist dummies! Directed and written by the horror dream team of Wan and Whannell, Dead Silence stars True Blood’s Ryan Kwanten as Jamie Ashen, a young widower who slumps back to his hometown looking for answers following his wife’s ‘death by dummy.’ Dogging him on his quest is New Kid Donnie Wahlberg in a wild, scene-stealing performance as a detective who seemingly can’t stop preening his facial hair.

The mythical boogeywoman of the piece is Mary Shaw, a ventriloquist who was once lynched in the town after a performance went awry and a child later died by mysterious circumstances. Jamie’s family were an essential part of her lynching, and now Mary is on the warpath from beyond the grave.

Dead Silence is incredibly silly, but an important step in Wan’s directing career. Throughout the film he plays with the kind of masterful sound design and jump scares that he eventually refined down to a sublime craft. Just like one of Mary Shaw’s dolls, all the parts are there but the movie is only possessed by a little soul that doesn’t do too much damage to your nerves. – Kirsten Howard

Yet unlike the many subsequent Saw sequels that came later, plus copycats like the Hostel franchise, Saw doesn’t take perverse pleasure in its characters’ suffering or imagine the villain as some kind of antihero. Jigsaw was originally a chilling serial killer in the David Fincher mold, and his original film had a surprisingly minimal amount of gore. Most of the picture is really about the dreadful suspense of anticipation as we wait for something horrible to happen when two men wake up inside a dilapidated industrial bathroom and are told they need to saw off their own feet to survive.

In truth, if this same exact script (minus the grisly flashback sequences) was presented a one-act Off-Broadway play in 2004, it would’ve likely been hailed as edgy and boundary-pushing art. Instead we got a horror classic that spawned a memorable, if ultimately trashy, B-horror franchise after Wan and co-writer Whannell left the series following the first outing. Fair trade. – DC

Back in 2010 when Insidious was released, Blumhouse hadn’t yet become the horror behemoth it is today. So low budget but glossy horrors starring talented household names weren’t the norm. It wasn’t just these attributes that made Insidious a breakout which still holds up a decade later, however. It’s the fact that the movie is undeniably scary. It may use certain jump scare tactics at times but boy, do they work. Patrick Wilson and Rose Byrne star as a couple whose son is capable of astral projection, which has taken him into the nightmarish world of the Further and caused demonic figures to haunt the family.

The first half of the movie will have you leaping out of your seat. The second half though is more of a comedy, marked by the arrival of psychic Elise (Lin Shaye) and her sidekicks, Tucker (Angus Sampson) and Specs (Leigh Whannell, who also wrote the screenplay). Made for just $1.5 million, Insidious is good-looking and distinctive, with scenes in the Further sharing an aesthetic with Dead Silence, and a mythology that clearly had legs. To date three sequels have been made, with a fourth confirmed last year. – Rosie Fletcher

As a horror sequel done right, Wan’s follow-up to the biggest horror movie of his career felt like a palate cleanser for the director. After helming the successful but tragically troubled production of Furious 7, Wan returned to his roots and delivered a fiendishly designed thrill ride. In The Conjuring 2, we again follow Patrick Wilson and Vera Farmiga’s fictionalized takes on Ed and Lorraine Warren, this time to London as they investigate the infamous “Enfield Poltergeist” (spoiler alert: it’s a demon).

Once again Ed and Lorraine play the good samaritans and help a young family in desperate need, and Wan still keeps it wildly entertaining and suspenseful, if not necessarily fresh. But as important as his gliding camera set-ups and ability to create new iconic images of evil out of seeming whole cloth—hello, there demon Nun!—it’s the humanity in both of Wan’s Conjuring films which elevate them above the rest of their franchise. Never mind the ghosts; the scene of Wilson crooning Elvis Presley to some beleaguered children is the stuff of movie magic. – DC

James Wan couldn’t have picked better subjects for his paranormal investigation franchise than Ed and Lorraine Warren, the controversial demonologists who left behind countless diaries and recorded accounts of demonic possession, haunted houses, and other supernatural events they claim to have witnessed over their decades-spanning careers. They even opened a museum full of spooky artifacts in the back of their Connecticut home. This is a couple who enjoyed digging into the occult, and with The Conjuring, Wan showed just how much he loved telling stories about the Warrens.

The first film covers one of the Warrens’ most famous cases, the Perron family haunting, with more than a few embellishments thrown in for an effective ghost story. In the real-life account and the movie, Roger and Carolyn Perron (Ron Livingston and Lili Taylor) are haunted by an antagonistic spirit that wants their newly-purchased 18th-century farmhouse in Rhode Island all to itself. That’s where the Warrens come in to investigate the strange occurrences, like the smell of rotting flesh in the basement.

The chemistry between Patrick Wilson and Vera Farmiga, who bring the Warrens to life, is one of the movie’s greatest strengths, establishing one of the franchise’s most important themes: that love can defeat any evil. It’s their devotion to each other, and their will to help others in need, that allows them to overcome any supernatural obstacles in these movies. (It’s why the sequels spend so much time threatening to tear them apart.) More than the creepy set pieces—like a possessed Carolyn in the crawl space *shudder*—and the “based on a true story” tagline, it’s the Warrens as characters that people keep showing up for, and the first Conjuring cleverly sells their love story to an audience just expecting jump scares and demons. – John Saavedra