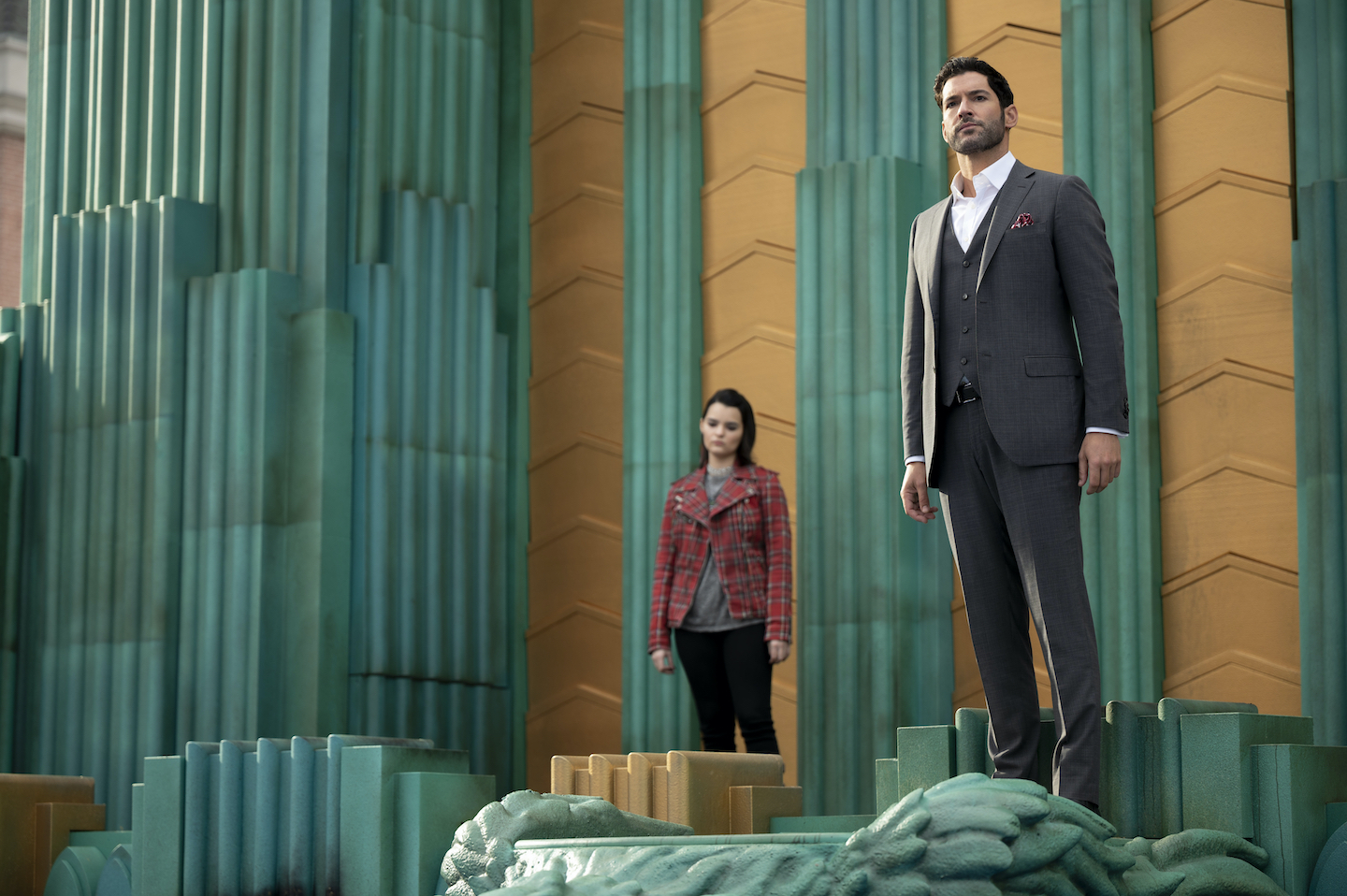 “The God thing is on hold for right now.”

Toxic masculinity, police misconduct, same sex wedding. As Adam says, “wokeness is hard,” but it’s also fair to say that Lucifer risks going a bit overboard as a social justice warrior in its final days. But any perceived heavy handedness floats away when Eve walks down the aisle toward her beautiful, black gowned partner Mazikeen, and “My Best Fiend’s Wedding” reminds us what makes this series so special. It’s the power of love amidst the vagaries of the human condition, and if the celestials become affected as well, then all the better. Oh, and the bombshells just keep on dropping.

Drunks and microphones generally make for dangerous bedfellows, and Ella’s revelation at Eve and Maze’s wedding looks to throw the entire celestial/human family into chaos. While it’s been a long time coming, Ella’s reaction to the news that Lucifer’s been telling the truth all along brings with it a few surprises. It’s not a surprise that Ella feels hurt to have been left out of the loop, however, her reasoning catches everyone off guard. Why would it be difficult for her to process the news that angels, demons, and the Devil himself reside on Earth when she’s been a devout believer all along?

It’s the long term impact Ella’s impromptu speech will have that can’t yet be measured. Of course, her contention that an impending end-of-the-world scenario stands as the most globally significant takeaway, but now Chloe must explain to Trixie that what the young girl has just heard is true. Lying at this point seems ludicrous, and while it’s not out of the question, the mechanics behind this conversation will no doubt become problematic. Which is going to be harder for Trixie to comprehend – the man she plays board games with is the Devil or Rory is her little sister from the future? We see the sisters meet briefly at the wedding and sense Rory wants to confide in Trixie, but she holds off, unaware of what’s to come.

“It’s Maze and big feelings; what could possibly go wrong?” There’s still a lot to break down about the wedding, but the introduction of Adam (Scott MacArthur) into the equation feels unnecessary and somewhat gratuitous. It’s understandable that someone like Maze has doubts before making arguably the biggest decision of her life, but we don’t need first-bro Adam waltzing in with his neanderthal attitudes about women as a means of examining and working through those fears. It’s not clear why he sits on Dr. Linda’s couch and admits that “we were made for each other,” but her reaction saves an otherwise silly scene.

Nevertheless, it’s Eve who must bear the preponderance of Adam’s boorish behavior. “It’s time to come home, babe,” may be one of the most cringeworthy lines in the series, but Eve stands firm, acknowledging that she never chose Adam in the first place. The women play it perfectly as Eve kisses Maze who gives Adam a well deserved middle finger. However, when Eve and Maze break into Linda’s office, the truth about Maze’s jitters comes into the open. She’s afraid of turning into her mother Lilith.

Lucifer’s empathetic evolution continues when he finds a distraught Eve drinking and eating to excess and tries to explain Mazikeen’s issues with self-worth. “What kind of person tries to wreck their own wedding?” He experienced the exact same feelings with Chloe and quickly gets Eve back on track. In the end, Eve tells Maze the only words the demon needs to hear at this stage. “I just want you to be you,” and the wedding is back on.

While Maze and Eve deal with their issues, Rory faces a much more complicated set of interpersonal hurdles. We still don’t know whether she possesses the ability to return to her time or must remain stuck in the present, but either way, her father continues to make any attempts at detente increasingly frustrating. In addition to mending the relationship with her father, Rory confides in him the reason she doesn’t plan to attend the wedding. Most want to learn their fates, but “what if I say something that messes with their future?” she worries. It’s a valid concern that promises to only escalate now that the truth is out in the open.

Still, Rory’s scenes with Chloe instill hope that all will eventually settle itself, even though her mother now faces the biggest challenge of her time as a mother. “You make choices, mom. If I told you what they are, you wouldn’t be making them anymore.” It’s sometimes easy to dismiss Rory as a petulant, angelic millennial, but she understands the importance of keeping her secret. She introduces herself to Trixie and attempts to learn why her older sister holds Lucifer in such high regard. Her answers further complicate Rory’s daddy issues and when she tells Trixie “I’m nobody,” her pain is unmistakable.

It’s not clear which bombshell wreaks the most havoc, but Rory’s admission that Chloe is dying in the future while Lucifer remains AWOL from his family certainly begs to be explained. Lucifer must feel as if he’s playing whack a mole as he navigates a plethora of problems on Earth before taking on “the God thing” in the Silver City. Should he have left the adults, Mazikeen and Eve, to figure things out on their own in order to keep his date with his daughter? Yes, he has Good Intentions, (sorry, couldn’t help it) but he makes the wrong choice. Rory needs his attention infinitely more than Maze and Eve.

With only three episodes remaining, “My Best Fiend’s Wedding” neatly ties up some loose ends, but as so often happens, new problematic threads appear. In the end though, Ella’s revelation drives the narrative. Luci, you got some splainin’ to do.

The Last of Us: Are the Infected Actually Zombies?
MILESTONE GENERATIONS OFFICIAL TRAILER
How to Find a PS5 and Xbox Series X In 2023
Why One of Star Trek: The Next Generation’s Worst Episodes Is Still Worth Watching
The Last of Us: How Long Does It Take to Beat the Games?