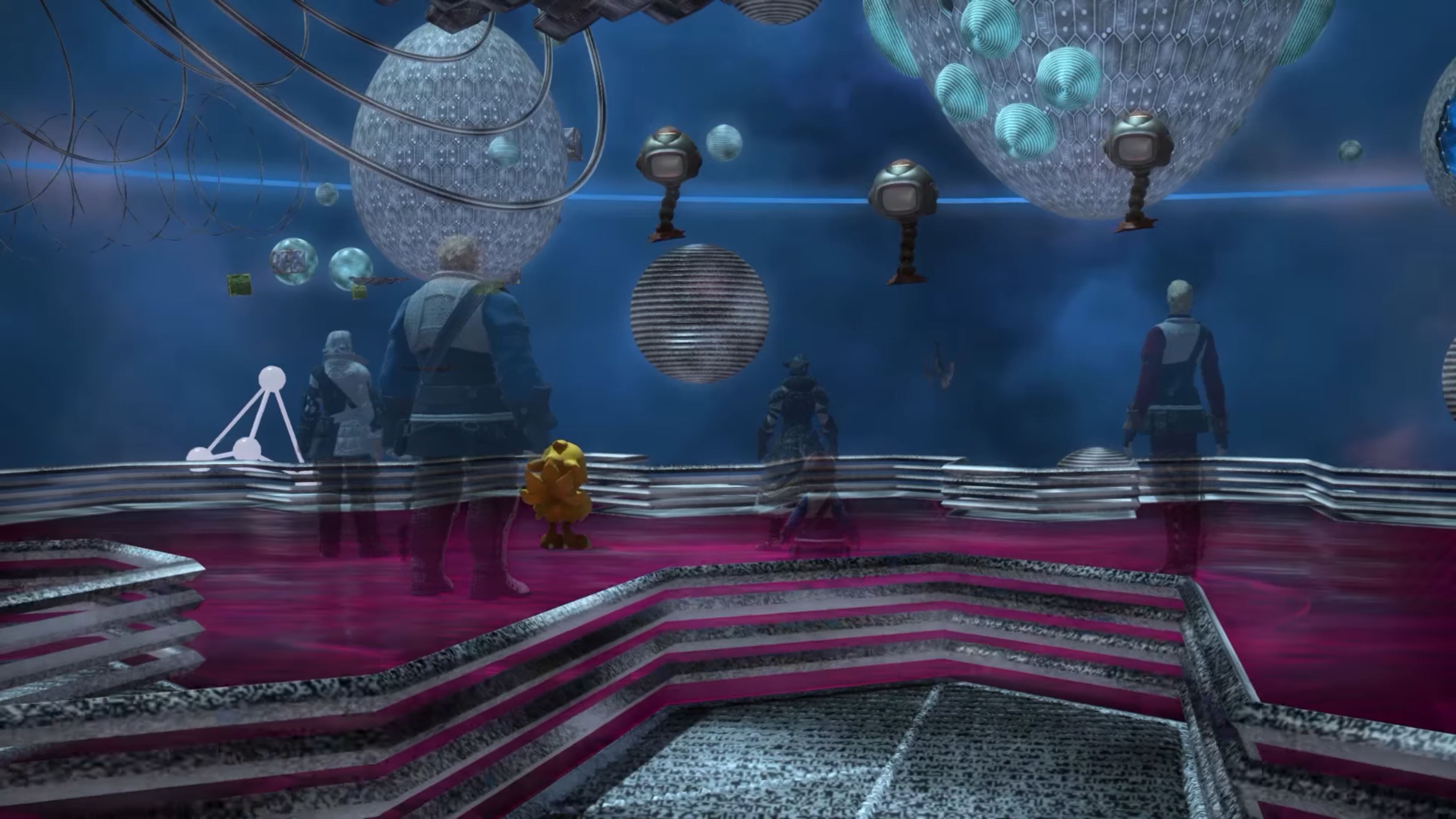 Many beloved video game franchises try to maintain a semblance of continuity and worldbuilding. Usually, those attempts consist of linear a-to-b narratives across sequels, but there are times when the connections between games in a franchise can be a bit perplexing. For instance, each Legend of Zelda game seems insular at first, but they actually take place in a shared world and timelines. The timeline barely makes sense, but it’s there. Final Fantasy, meanwhile, seemingly reinvents its wheel with each entry. Every title takes place in its own world with its own history and lore that is, on paper, completely separate from the rest of the series.

If you scour Reddit and other internet forums, though, you may eventually find theories that claim the Final Fantasy franchise utilizes one big, interconnected multiverse. A popular variation of that belief purports that Final Fantasy XIV sits in the center of that universe or that other titles sprung from that game’s world.

In fact, many players who have extensively explored Hydaelyn and the other worlds of Final Fantasy (not to be confused with World of Final Fantasy) eventually reach the same conclusion: Final Fantasy exists in some kind of multiverse. Do those claims and theories have any merit, though, or are audiences letting their apophenia take them for a joyride? Let’s try to find out together.

We might as well get the most obvious evidence for a shared multiverse out of the way first. If you’ve played more than one Final Fantasy game, you probably know the series has a lot of recurring elements (such as Chocobos, Behemoths, and engineers named Cid). However, some common elements go deeper than shared names. Sure, every now and then unrelated characters will sport the same moniker for the sake of references and callbacks (such as Zeromus from Final Fantasy IV and Zeromus from Final Fantasy XII) but some recurring faces who only seem like they exist for the sake of tradition actually help tie the games together.

The first recurring character we have to talk about is everyone’s favorite pillar of buffoonery, Gilgamesh. In virtually every entry, he is portrayed as a bumbling wanderer who seeks power through collecting weapons. Moreover, most Gilgamesh incarnations sport the same red hood, kabuki face paint (sometimes a mask), and awesome battle theme that transcends music genres, but that isn’t because Square Enix is lazy. The majority of Gilgameshes tend to appear and/or disappear into an Interdimensional Rift (more on that later). That implies they’re the same character in an unending, world-hopping obsession for new weapons.

Indeed, after Gilgamesh is beaten in Final Fantasy IV: The After Years, he cries out the name of Final Fantasy V’s protagonist, Bartz. In Dissidia 012 Final Fantasy, Gilgamesh claims to have dueled “strange opponents” countless times. If that’s not enough for you, consider that in later entries, Gilgamesh wields replicas of weapons from past Final Fantasy games. Gilgamesh doesn’t just talk about the Final Fantasy multiverse; he almost literally beats players over the head with it. However, Gilgamesh isn’t the franchise’s only cross-dimensional tourist.

Whenever you finish a Final Fantasy story and beat the final boss, each game offers additional challenges in the form of “superbosses.” One of the franchise’s most consistent superbosses is the quadrupedal robot known simply as Omega. Throughout its various Final Fantasy appearances, Omega’s physical appearance is portrayed with a startling amount of consistency. However, the robot’s true nature is a bit more up in the air. As some fans have discovered Omega has two possible incarnations: shards left behind to collect data and demi-knockoffs created by local geniuses who drew inspiration from the original Omega. Either way, Omega is a dimension-hopping robot whose sole purpose is to defeat its arch-nemesis, Shinryu. According to lore provided by games such as Final Fantasy XIV and Dissidia Final Fantasy, every Shinryu that players face is also actually a minor fragment deposited to help the original grow stronger.

It’s certainly harder to argue against a multiverse when you have three recurring characters that practically rely on it for their motivations and design.

When Nintendo set the world on fire with the Super Smash Bros. franchise, other companies started making their own mascot fighter game that they hoped would print money. Square Enix’s Dissidia Final Fantasy set itself apart with a vastly different combat system. However, Dissidia’s bigger claim to fame is its story, which breaks from mascot fighter tradition by leaning on and expanding its source material’s canon (especially the parts that concern the multiverse).

Since Dissidia is a spin-off, you’d probably assume it exists outside of the Final Fantasy canon with character facsimiles standing in for the original protagonists. After all, that tends to be the industry standard (Nintendo’s Shigeru Miyamoto once confirmed that Super Smash Bros.‘s characters are actually toys). However, Dissidia’s fighters are surprisingly the real deal. That’s because, according to the narrative, the real Final Fantasy characters have been summoned from their own worlds to fight on behalf of the gods in Dissidia’s World B. Every Dissidia game starts off with this statement, and, in fantasy properties, disparate worlds usually imply a multiverse. Since there are three Dissidia games (four if you count the mobile entry), the entire franchise is arguably one big multiverse confirmation.

Moreover, Dissidia goes several steps further since World B is a near-geographic replica of the first Final Fantasy’s setting, World A (albeit dotted with arenas ripped from the fragmented memories of its characters without rhyme or reason). For instance, one of the battlegrounds in World B is a blasted moonscape. Why is a location like that on a planet with an atmosphere? Well, it’s because it was pulled from the memories of Cecil Harvey: a character who traveled to the moon in Final Fantasy IV. Without a multiverse, there would have been no memories to pull from.

Now, since characters die left, right, and center in Dissidia, you might wonder how the series canonically fits into the Final Fantasy franchise without shattering the space-time continuum. Well, time works differently in World B, and that plot point is used to insert new canon into older titles. Everyone is caught in an endless cycle of battles, death, resurrection, and amnesia. They barely remember where they came from or why they are fighting and just know that they need to fight. But, after what is implied to be countless cycles worth of combat, the first game’s ending explicitly states that the various heroes and villains return to their respective worlds. Everyone except for the Warrior of Light, that is. He was created on World B by Cid of the Lufaine (a character retroactively added to rereleases of the first Final Fantasy) and retconned into one of the World A’s heroes from the original Final Fantasy. From there, Dissidia Final Fantasy NT pulls them all back for one more round.

Without a Final Fantasy multiverse, Dissidia wouldn’t make a lot of sense and would certainly be a very different spin-off series from a narrative standpoint.

It’s no secret Square Enix loves to stuff Final Fantasy XIV full of collaborative content. Players have gone on quests and collected equipment ripped out of properties such as Yo-Kai Watch and Garo. Square Enix also tends to collaborate with…well…itself and place the results in Final Fantasy XIV. For instance, Lightning and Noctis showed up for limited-time events in the game, but those instances hardly prove that the game sits in the middle of some kind of Final Fantasy nexus. After all, Lightning can don the iconic getups of characters such as Cloud, Yuna, and Lara Croft in Lightning Returns: Final Fantasy XIII. Does that mean her tailor lives in the center of a Final Fantasy or Square Enix multiverse? Probably not since those crossover costumes are all optional DLC (and ultimately probably meant to advertise different Square-owned games). All Lightning and Noctis demonstrate in their Hydaelyn vacations is how the different Final Fantasy worlds are connected.

Lightning and Noctis visited Hydaelyn thanks to the Interdimensional Rift (the same one Gilgamesh, Omega, and Shinryu use to get around), and they aren’t the only characters who have taken an interdimensional tour. The Stormblood expansion introduced the Aetherial Rift: a raid dungeon hosted by a surprisingly friendly Omega (friendly in that he tests players before trying to stomp them out of existence). Thanks to Omega’s control over the Rift, gamers can square off against recreations of past Final Fantasy game bosses, including Chaos, Kekfa, Exdeath, and the Phantom Train. Again, you might assume these crossovers imply that Hydaelyn rests at the center of the multiverse. Instead, they most likely suggest that Omega either visited or used networked knowledge of different worlds to create these arenas, which lends credence to the theory that most Omegas seen throughout the franchise are either the same killbot or are linked in some way. Square Enix also apparently just loves to reference/advertise its older titles.

Considering the Interdimensional Rift and characters such as Gilgamesh and Omega, you really can’t argue against the likelihood of some kind of Final Fantasy multiverse. However, is Final Fantasy XIV really at the center of it all? Elements from different entries (as well as unrelated games, such as NieR:Automata and Monster Hunter: World) are certainly more likely to bleed into Hydaelyn, but does that make it the center of the multiverse? Signs point to no. Odds are Final Fantasy XIV’s above-average interdimensional crossover rate is merely a result of its MMORPG nature and good old-fashioned marketing.

At the end of the day, it doesn’t matter which Final Fantasy world, if any, spawned the others. They all are clearly interconnected through countless narratives and world-building elements, so unless Square Enix reveals the identity of this fabled origin world, all we can do is speculate. Then again, if we knew which Final Fantasy universe spawned the others and exactly how the game’s multiverse elements work, that might suck some of the magic out of the series.

Other Space | Comedy Sci-Fi Series | Coming Soon to DUST on TV
The Last of Us: Can Ellie Infect Others?
Actual footage of me on the search to find the Westworld ending we all deserve 🙃 #shorts #dust
DC Movies and TV Shows: Full DCU Schedule
Lost Big Bad Beetleborgs Pilot Would Have Ditched The Horrifying Flabber