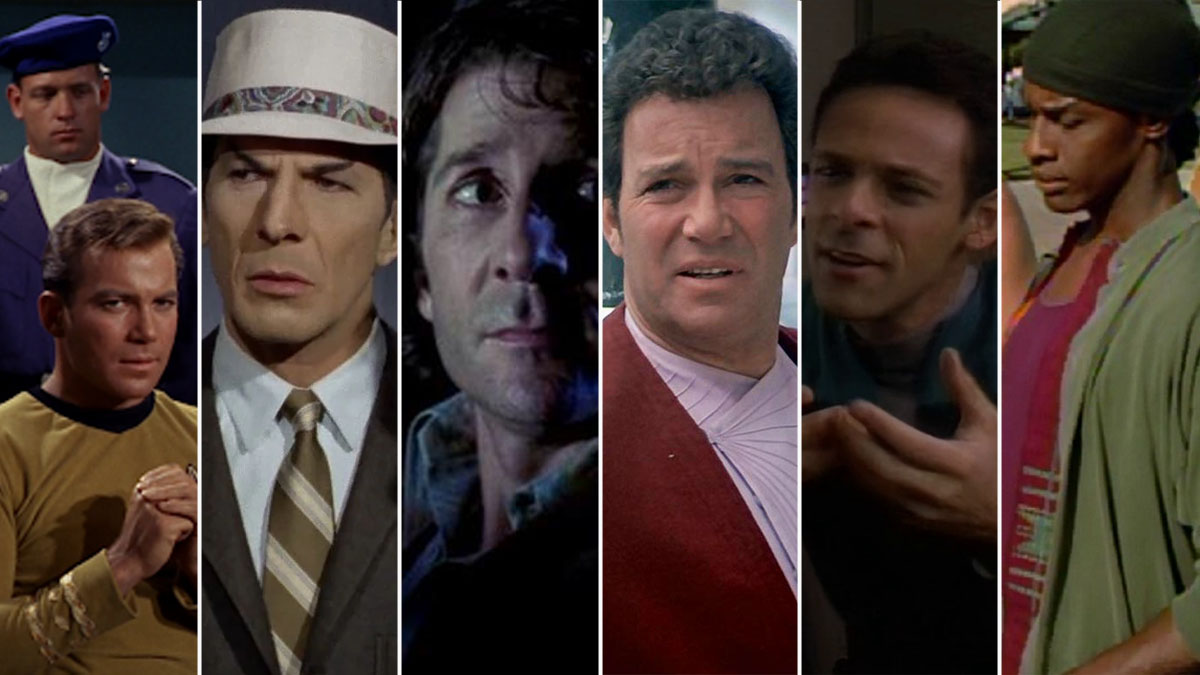 So the new Star Trek: Picard trailer has dropped and among the big plot twists it revealed are the fact that Picard & Co are going to be travelling back to Earth, circa 2022 AD. We’re looking forward to exciting scenes of people from the 24th century being unable to drive cars (despite the pretty lengthy car chase we saw in the last episode of Star Trek: Lower Decks), Q and Picard sparring again, and wondering how Guinan fits into all this. My personal theory is that after her adventures with Picard and Mark Twain in the 19th century, Guinan decided to stick around on Earth, eventually posing as an actor called Whoopi Goldberg.

This is far from the first time Star Trek has travelled back to the present day – even if “present day” is pretty broad for the 55-year-old franchise. We have no way of knowing why the series keeps returning to this setting that doesn’t need the manufacture of any new props, sets or costumes, but it seems like a good time to look at when Star Trek has done this before and ask “Who wore it better?”

This episode would prove to be a particularly tricky one for nearly every single time travel episode that has come since, in that it shows time travel for the Federation is so easy and routine that the Enterprise can just nip back to the Cold War to see why we never Great Filtered ourselves out of existence. Unfortunately, in this episode Kirk and Spock don’t get to see much of 20th century Earth, or indeed do much of anything.

‘Assignment: Earth’ was conceived as a backdoor pilot for a new series about Gary Seven, a human bred and raised by aliens to act as a secret agent on Earth and protect us from our own capacity for self-destruction. This means Kirk and Spock’s role is little more than to sit around and say “Wow, this looks like a great idea for a television show!”

Still, I can’t help but wonder about a Star Trek franchise in the parallel universe where its first spin-off was a spy show set in 1968.

This episode of Star Trek: Enterprise stands out because it is perhaps the only episode on this list where they decided the present day should be filmed any differently from the space future. The lighting, the camera work, the whole episode feels much more like Angel, or a cop show from the period than the Star Trek style that had been uniformly adopted since The Next Generation.

Usually when Star Trek comes back to our time it is to take us on ‘a romp’, where people point out Starfleet uniforms look like pyjamas and the crew go around misunderstanding pop culture references. This, however, feels like Star Trek invading a much grittier show.

Unfortunately, you can tell that this is a network science fiction show trying to show how adult and gritty it is, because within the first ten minutes of the episode we see a sex worker abducted. Maybe one day science fiction shows will find a way to show that they are proper grown-ups without a drive-by or disposable sex worker character appearing in the first ten minutes, but ‘Carpenter Street’ is not that show.

The other thing Star Trek’s forays into our century do is emphasise how far humanity has come, or still has to travel. This is where ‘Carpenter Street’ really falls down. Because this was Enterprise’s dark, post-9/11 Xindi storyline, we see Archer literally beat information out of someone – not for the first time in this season. It’s a scene that highlights everything that’s wrong with this version of Star Trek.

It’s also the bringer of bad news, as at one point T’Pol asks about fossil fuels to be told that “It’s not until 2061 that…”

The sentence is left incomplete, but that sounds like bad news for our 2050 emissions targets.

This is Star Trek’s first trip back to the 20th century, and it sets the rules for so much that comes later. Agonising about changing the future, having modern day characters remark on how silly everything is, Star Trek characters being taken prisoner and taking the piss out of their interrogators. The formula is refined in many ways from here on, but the ingredients are established here.

It also establishes, as ‘Assignment: Earth’ later confirms, that any ordinary warp-capable ship can perform a manoeuvre to travel forward or backward in time at will, a plot device most of the Star Trek canon has heroically stuck its fingers in its ears and shut its eyes to avoid.

The main reason this entry doesn’t rank higher is that the action is almost entirely confined to US military bases, denying us the fun of seeing our favourite Starfleet officers wandering around our day-to-day world as if it’s the Planet of the Week.

This Star Trek: Voyager two-parter, on the other hand, gives us that in spades. It knows what the fans want and it is here to give you a big steaming bowl of it. Neelix and Kes watching daytime soaps? Check. Tuvok having to ensure he wears a beanie at all times? Check. Paris getting his 20th century history and slang hilariously wrong? Check. An oddly jarring turn by a young, pre-comedy stardom Sarah Silverman? Okay, maybe you weren’t asking for that, but check!

This is more than just an Easter egg (unlike, we’re assuming, the Talosian action figure on Sarah Silverman’s desk). Over the course of the episode we learn that the entire microprocess revolution that created the world we know and love was the result of stolen 29th century tech.

Does this mean history was changed? That all Star Trek following this episode takes place in a divergent timeline where the Eugenics Wars never happened? This has some fascinating connotations that we will touch upon later in the article, and which I will explain to you at length after precisely one and a half pints.

The episode does have its weak points however – Voyager being seen on national television never seems to go anywhere, and neither does the whole subplot where Chakotay and Torres end up prisoner in a survivalist compound for a bit.

As we’ve already mentioned, there’s also a lot of agonising about how Voyager will get to the present, when we already know that they just need to whip around the sun at warp speed and boom, the series is over.

Oh, and this is an extremely minor gripe, but Janeway tells us she has no idea what her ancestors were doing in this time period – despite subjecting us to the tedium of her story in ‘Millennium Gate’ which was set only four years after this.

This episode might be considered a cheat, since at time of broadcast it was technically set in the future. However, since it (along with Irish Reunification) is supposed to take place three years on from now, I think we can say it counts.

This Deep Space Nine story is decidedly not ‘a romp’. Yes people make fun of the characters’ clothes, and Kira and O’Brien’s jaunts through history raise a smile, but more than all but a select number of Star Trek stories, this is about just how far our reality is from the hoped-for future of Star Trek.

Bashir lands some lines that hit quite a bit heavier now than they did in the nineties, from “The 21st century is not one of my strong points – too depressing” to the plaintive “How could they have let things get so bad?” at the story’s conclusion.

And while it is set over twenty years in the future from the perspective of the broadcast date, it wasn’t far off. Stories evocative of the sanctuary districts are easy to find, and as writer Robert Hewitt Wolfe says, “We weren’t being predictive. We were just looking out our windows in the ’90s.”

Only two things really mark this episode out as an anachronism. One, the technology looks painfully 90s – our technology looks far closer to the 24th century than the bulky monitors seen everywhere in this. But then again, this episode was broadcast prior to ‘Future’s End’, so maybe Henry Starling hadn’t kickstarted the microprocessor revolution in this timeline yet.

The other, far grimmer element to have dated is the idea that one innocent black person being shot by police could be enough to cause the sea change this episode says it does.

There wasn’t ever really going to be any debate over this, was there? Star Trek IV: The Voyage Home is hands down the one to beat if you’re writing Star Trek characters travelling to the present day. The film itself was something of a departure for the franchise. Rather than Robert Wise’s epic, sombre, proper science fiction in The Motion Picture, or the bombastic action of Nicholas Meyer’s Wrath of Khan, The Voyage Home was helmed by a director who would be best known for the cult comedy, Three Men & a Baby.

This 20th century feels far more inhabited than other portrayals, with screen time being given over to casual conversations between bin men, and workplace arguments independent of the former Enterprise crew.

Of course, by now the crew of 1701-no-bloody-A-B-C-or-D should be old hands at Earth in the 20th century. This is their fourth trip here, not counting planets-that-mysteriously-resemble-Earth-in-the-20th-century.

But these fish are never more out of water than they are in this film, and the results are charming. Kirk explaining swearing to Spock, Kirk observing people “still use money”, Chekov standing in the middle of the street asking for directions to the “Nuclear Wessels”, Scotty’s “Hello Computer!” and Kirk Thatcher getting nerve-pinched for listening to his own music on a ghetto blaster. Plus countless more zingers, sight gags and throwaway lines that I’m still finding new ones of after many, many re-watches.

And the cast are clearly having the time of their lives. Shatner’s comic talent was always on display, but in this movie he is really allowed to cut it fully loose giving reaction shots that make you feel bad about every time you mocked his acting.

But no matter how silly it gets, this film knows, more than any other, the point of sending Star Trek characters into the modern day. It is to show us the difference between our ideal selves and where we are – and it does it no less starkly than ‘Past Tense’. With a light comic touch, Kirk and co. encounter capitalism, the spectre of nuclear war, and most of all, the devastating environmental impact we’re having. Even if we reach the ideal Star Trek future, this film says, we could still lose things we can’t replace along the way.

Star Trek: Picard is going to have to work hard if it wants to walk in its footsteps.

While not taking place in the present day, it’d be remiss of this article not to mention ‘City on the Edge of Forever’, which refined ‘Tomorrow is Yesterday’s formula and is just one of the all-out best Star Trek series ever, and ‘Little Green Men’, which twists the usual Starfleet-in-the-20th-century formula by having the Ferengi arrive in the 20th century and find humans far more brutal, greedy and stupid than even they suspected.

James Gunn’s Plan for DC Video Games Sounds Awfully Convoluted
Junji Ito Maniac: Ranking the Stories From Creepy to Downright Terrifying
The only way you’ll get me to run is if a Allosaurus is chasing me.🦖 #short #shorts #scifi
The Last of Us: Are the Infected Actually Zombies?
Marvel Studios’ Ant-Man and The Wasp: Quantumania | Experience