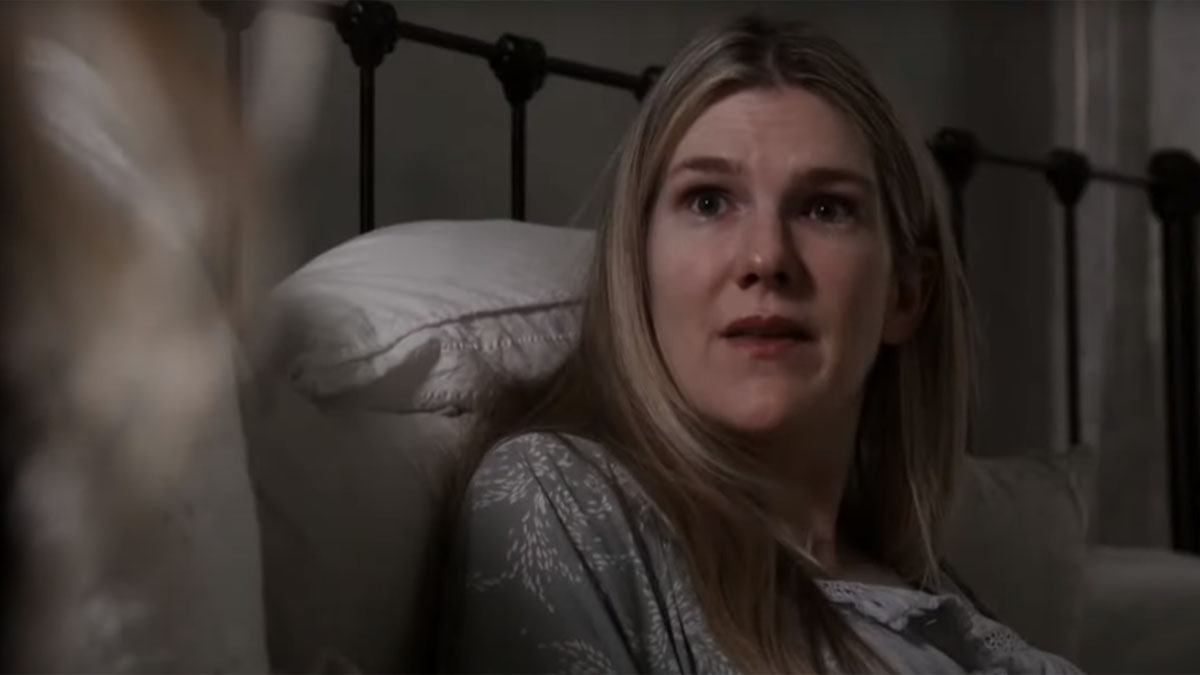 As the story picks up steam, American Horror Story taps into some pretty classic horror tropes yet again to enrich its story. One of the things that initially caught my eye about the series when it first hit the airwaves ten years ago was the way in which the show was clearly written by horror fans and went out of its way to reward horror fans with little Easter eggs. Maybe it’s a shot from a classic movie. Maybe it’s a snippet of a score. Maybe it’s a full-on genre rip. Take a little here, a little there, and make a horror stew.

One of the classic themes of the horror genre is the idea of the ‘hysterical’ woman, either pregnant or a new mother or otherwise less able to defend herself, getting used and abused by the people around her. “Gaslight” does exactly what it says on the tin; you can’t name your episode after one of the most used (and misused) ideas in plays, films, and television without telling everyone what to expect. In this case, as in most cases, American Horror Story delivers it straight ahead and with maximum power, nipping a shot from Nosferatu here and a scene from Rosemary’s Baby there. To paraphrase my favorite fictional horror writer and Darkplace star, Garth Marenghi, writers who use subtext are cowards. Red Tide leans in, pushing for more, and asks the important question.

What if the woman you were gaslighting was also turning into a blood-sucking quasi-vampire who also kind of wanted to eat her baby?

Doris’s story was never going to end well. The show isn’t called American Success Story, after all. Even the people who survive and thrive as a result of their experiences are immeasurably troubled by them for the rest of their lives. No one gets a happy ending, and it seems that no one in Red Tide is headed in the direction of a happy ending, either. Doris, the last, best hope for saving her family, finds herself beset on all sides by forces trying to lie to her, betray her, pressure her into doing things she doesn’t want to do. She’s forced to put herself at risk to protect her child from not only Mickey and TB Karen, but from people who are supposed to be on her side like Alma and Henry. It’s an unwinnable situation for poor Doris, who is trying to recover from giving birth while surrounded by people who are essentially enemies to her safety and sanity.

It’s a staggering betrayal that audiences have been waiting on, but poor Doris is taken aback by it from the very opening moments of “Gaslight.” Lily Rabe hasn’t had a ton to do this season aside from pretend to be pregnant and be a wet blanket for Henry and Alma’s drug-fueled artistic vampirism, so when she gets the ball in this episode, she runs with it in a beautifully committed physical and emotional performances, most of which is done while confined to a bed or trapped in a bathroom. The sad relationship between TB Karen and Mickey also continues to be sweet, yet a little salty, with Macaulay Culkin impressing and Sarah Paulson being her typically stellar self, leaning into all of Karen’s physical and emotional quirks and being able to act through her special effects makeup beautifully.

Things go the way things are expected to go in Brad Falchuk and Manny Coto’s script, but that doesn’t make it any less sad. Mickey and Karen, in particular, were heart-touching given that both characters only had one way out of the situation they were in, and that was to compromise themselves to save themselves, either through prostitution or kidnapping or taking The Muse. Karen isn’t necessarily a likable character, but Paulson makes her sympathetic, and Culkin is able to bring some of his strange likability to bear on the character of Mickey. Even when he’s doing things that are unlikable, it’s hard to directly dislike him for them, because he’s trying, in his own manipulative way, to help out a loved one rather than for simple selfishness.

Alma, Henry, and Ursula deserve no such kindness. Alma is a child, and while she doesn’t know better per se, she knows better, and Ryan Keira Armstrong does a great job of walking that balance of manipulation and ignorance. Finn Wittrock also does well at playing Harry’s moral ambiguity through the bulk of the episode, only for him to turn full-on despicable once Doris takes The Muse and becomes one of the pill people. Ursula is just a terrible person, and Leslie Grossman revels in scumbag behavior throughout the episode, particularly in the scenes in which Ursula is attempting to hide her slimy nature.

Director John J. Gray does a skilled job with the actors, orchestrating a lot of dueling moods and behavioral shifts across the episode well. Given that everyone is different from where they started by the end of the episode, that’s no mean feat, and he doubles down on Doris’s weakness as she recovers by playing up the fact that she’s being drugged and lied into compliance by her greedy so-called loved ones. Gray also does a good job with the peculiar terrors of the birthing and newborn care process, with Rabe standing in for every sleep-deprived, anesthesia-doped new mother ably. Though, most people do have loved ones they can trust to care for their baby; Doris doesn’t get that privilege. Instead, she wakes up to horrors like her daughter gnawing on her little brother’s leg and her husband scheming behind her back to finish the house redesign job because he doesn’t believe in her talent.

That Harry’s ultimately right about Doris’s mediocrity is merely insult after injury. The last person who could protect baby Eli is now out of his life, and he’s left to the mercies of a workaholic vampire, a vampire child with poor impulse control, and the most stereotypical Hollywood scumbag since Tom Cruise in Tropic Thunder. Given that the Gardner baby is on the radar (and menu) of Bell Noir, that poor little baby is in serious trouble.

Best Nintendo Switch Settings You Should Be Using
HBO’s The Last of Us: The Changes to Bill’s Story and the “Parallel Universe” of TV
DC Nation – Wonder Woman – Part 2 (full)
Lost Big Bad Beetleborgs Pilot Would Have Ditched The Horrifying Flabber
Xbox’s Lack of Exclusives Has Been a Real Problem For the Series X/S Generation