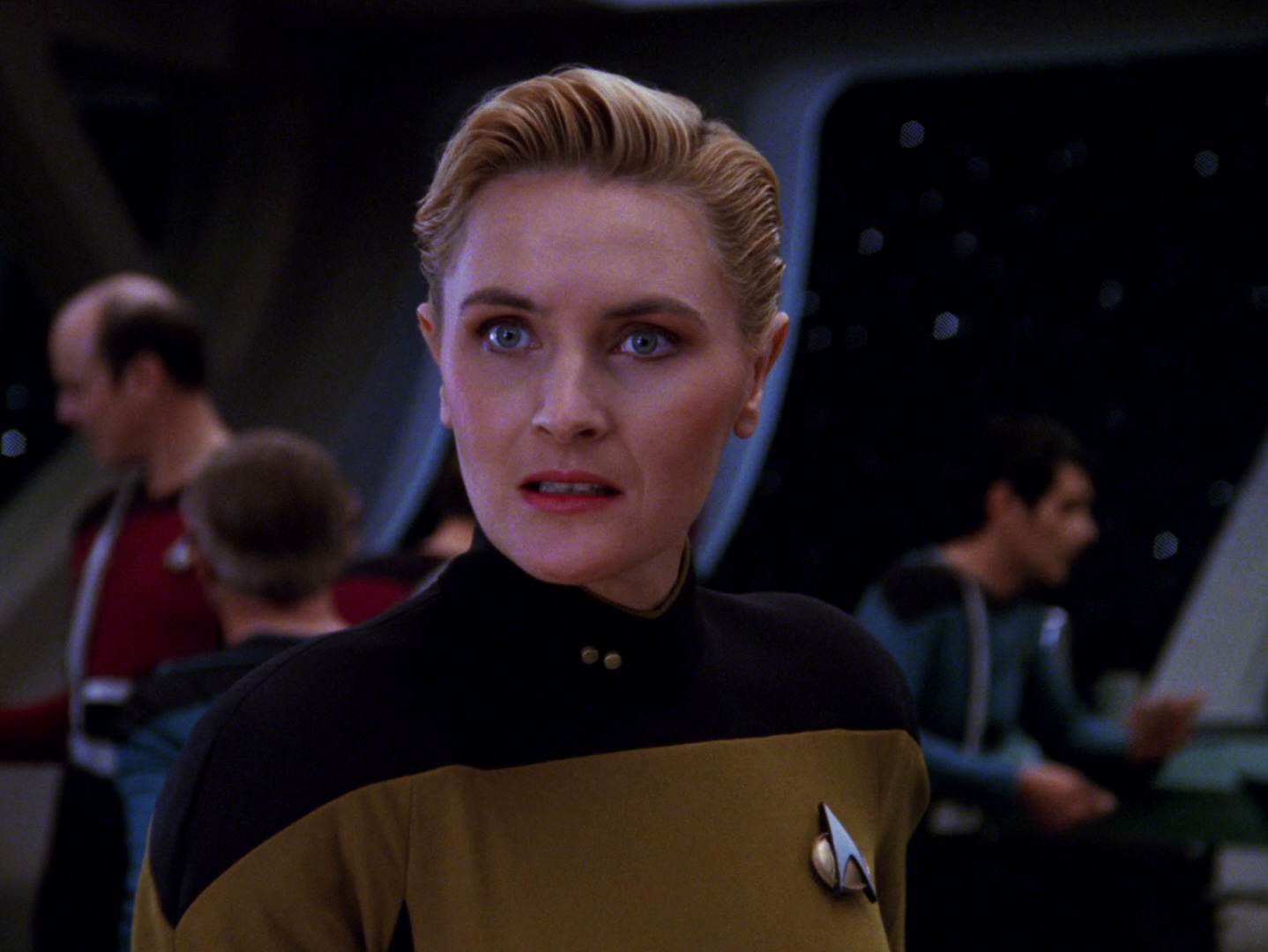 Tasha Yar deserved better. When the oil slick creature known as Armus killed off Tasha in The Next Generation episode “Skin of Evil,” the fandom let out a collective groan. As its first season wrapped up, TNG was already down one fantastic character and the franchise wouldn’t get another female head-of-security on a regular basis until Nhan appeared in Star Trek: Discovery, 31 years later. But, like some kind of self-aware rogue A.I., the canon of Star Trek itself seems to want justice for Tasha Yar. The latest example comes from the coda of the Lower Decks episode, “The Spy Humongous,” further proving that, decades later, Trek canon is still looking to avenge Tasha Yar. Here’s how the hilarious Lower Decks Easter egg went down…

At the very end of “The Spy Humongous,” after wrapping their duties cleaning up random alien artifacts on the Cerritos, Mariner reveals to the other Lower Deckers that she snagged a “submanifold casting stone,” which they can use to “broadcast our voices to other planets.” Rutherford asks “What’s that good for?” and Tendi jokes, “Yeah, like what are we going to do — prank call Armus?” Cut to Varga II, the planet from The Next Generation episode, “Skin of Evil,” and Armus is just hanging out. The gang taunts Armus and when he refers to himself as a “skin of evil,” Tendi says, “More like a puddle of sh*t!” If you forgot who Armus was, that’s okay. Let’s talk some Armus…

Who Is Armus In Star Trek canon?

Armus is a puddle of sh*t alien lifeform that existed as the personification of all the terrible aspects of an unknown alien species only referred to as “a race of Titans.” Armus only appeared in one episode of The Next Generation, the aforementioned Season 1 episode “Skin of Evil,” in which Troi’s shuttlecraft crashed on the planet Varga II, and was enveloped by Armus. In a rescue attempt, Armus killed Tasha Yar simply to demonstrate his power. For the audience, Tasha’s death was abrupt and more similar to the way “redshirt” characters had died on The Original Series. This episode of Lower Decks references this (without mentioning Tasha) when Boimler briefly joins a group of cocky ensigns who call themselves “the Redshirts.”

Believe it or not, this is actually the third time Lower Decks has referenced Armus. In Season 1, while delirious in the episode “Veritas,” Billips screamed “Tasha no! The garbage bag’s behind you!” And in the Season 1 finale, “No Small Parts,” Mariner says she is going to feed Boimler “to an Armus,” as revenge for ditching her. In real life, Armus was named after one of TNG’s early producers, Burton Armus.

The Legacy of Tasha Yar

Denise Crosby’s reasons for leaving TNG have been well-documented elsewhere, but suffice to say, at the time, she felt like the writing wasn’t supporting the promise of who Tasha was supposed to be. In most accounts,  Crosby claims it was an amicable parting, and pretty much right after she left TNG, she starred in the 1989 version of Pet Sematary. Crosby later returned to TNG in the Season 3 episode “Yesterday’s Enterprise,” in which Tasha is alive in an alternate timeline and serving on the Enterprise. Because of some timey-wimey shenanigans, this version of Tasha went back in time with the Enterprise-C and eventually had a baby with a Romulan. This resulted in the Romulan character of Sela (also played by Denise Crosby) who appeared in the episodes “Redemption,” and “Unification.” Crosby later returned as Tasha in the TNG finale “All Good Things…” in which Picard literally finds himself back before the very first episode, “Encounter at Farpoint.”

Crosby has also produced two documentaries about Star Trek fans: Trekkies and Trekkies 2. She is the granddaughter of Bing Crosby, which is only odd when you consider that the Bing Crosby version of “Blue Skies” was used in the very first scenes of the very first episode of Star Trek: Picard, a series that deals both with the Romulans (Sela!) and Data (Tasha’s one-time lover!) Presumably, Sela is alive  during the time frame of both Lower Decks and Picard, since she was last seen passed out after Data used the Vulcan nerve pinch on her in “Unification II.”

Could Tasha Yar Return Again? What About Sela?

Okay, so let’s not get too excited. Lower Decks was just making a fun joke about Amurs. And yet. The Lower Deckers pranking Armus is roundabout revenge for the sake of Tasha. So could Denise Crosby ever appear again as Tasha in new Star Trek shows? The short answer is yes. Presuming that the Romulan Supernova didn’t get her, Sela is alive in the Picard Season 2 timeframe. Then again, we know that Picard Season 2 is dealing with some alternate realities seemingly caused by Q. (Someone else who knew Tasha!) The point is, Tasha could easily return in an alternate timeline in Picard, or Sela could return in the regular one!

And if none of these things happen, it’s safe to say that some kind of reference to Tasha Yar (or Armus) will crop up in a new Star Trek episode within the year. The flame for Tasha Yar still burns bright, and so, the Star Trek canon will never forget her — even if her memory lives on in weird interstellar prank calls.

The Ark’s Sci-Fi Tropes Are ‘There For a Reason’
James Gunn’s Plan for DC Video Games Sounds Awfully Convoluted
Loki Season 2: The Timekeepers Are Back in New Trailer
Marvel Studios’ Ant-Man and The Wasp: Quantumania | Before
Pizza Tower Is the Best New Wario Land Game We’ll Probably Ever Get