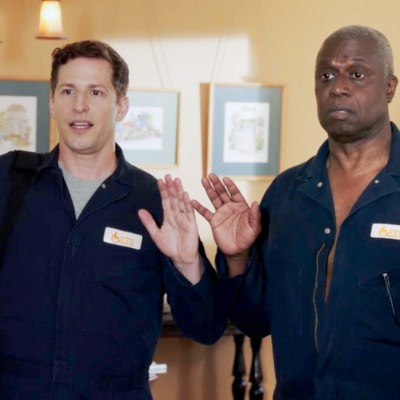 This article contains spoilers for BROOKLYN NINE-NINE season 8 episodes 9 and 10.

There reaches a point where every sitcom needs to say goodbye. While many fans would be content to watch Brooklyn Nine-Nine play the hits forever — watch Jake uncover a triple cross yet again, cringe when Boyle drops another unintentional innuendo, laugh when Holt robotically delivers the newest slang term — at some point, cast and crew run out of creative steam and must move on. Brooklyn Nine-Nine attempted to stretch itself in Season 8, admirable for a series this far into its run itself, and especially given the context and intentions, but not every comedy is meant for a serious reinvention. Brooklyn Nine-Nine was gloriously silly with just the right amount of pulp and heart, a rare comedy almost fully formed from episode one. It was here for a good time, and despite Fox’s best efforts, stayed for a long time. But now it’s time to wrap it up (title of your sex tape).

Let’s not relitigate Season 8’s unevenness or NBC’s baffling “one serious, one silly” airing strategy that unintentionally led to tonal whiplash. Instead, let’s focus on “The Last Day” for its own merits. The final episode of Brooklyn Nine-Nine is sweet, funny, and full of surprises. It’s also littered with character moments that don’t feel too heavy-handed and ring true for all involved. It never strays too far from the show we’ve always known and loved — it is a heist episode, after all — but it provides meta moments that acknowledge the show’s history, faults, and memorable characters, like Caleb the Cannibal and Bill, Boyle’s look alike and frequent heist participant.

Saving this season’s heist episode for the series finale was a clever decision, as well as the concept that each member of the Nine-Nine would try to hijack the game to deliver their own goodbye. Holt and Amy are both leaving for their respective promotions, but Jake drops the bombshell that he’s leaving the Nine-Nine to be a stay-at-home Dad. It’s a character decision that has been foreshadowed by Jake and Amy’s struggles with finding time to parent, but the finale goes a step further in making this moment feel earned. Jake reminds viewers of his own absentee father and the fact that his whole arrested-development persona is mostly a product of his daddy issues. Over the course of the series, Jake has greatly matured, and as Holt says in the episode’s final moments, this is the proof that he’s finally grown up.

The other main character takeaway surprisingly comes from Rosa. A large part of Rosa’s master plan is pretending that she’s exiting the game to go after a quickly returning, then fleeing Pimento. Everyone buys it, because as Rosa says, they (and most sitcoms) believe that finding true love or marital bliss is the one route to happiness. Rosa challenges this convention and speaks for many, I’m sure, when she tells Amy that she’s content being single and not tied down. It’s a fitting send-off for one of the series most interesting characters.

“The Last Day” isn’t all heavy, tear-jerker moments. Jake emotionally refers to Charles as a “sweet little dumb ass,” there’s a joke about Terry having the exact traits of the Kool-Aid man that pays off wonderfully, and some great self-referential jokes about doing the heist for the eighth time and the series’ use of a poor baby doll to portray Mac. My favorite moments are Holt revealing that he routinely has a balloon arch placed around Madeline Wuntch’s grave and the reveal that Holt’s tattoo his Kevin’s head on Cheddar’s body. It’s certainly worth the wait.

There’s also heist material that’s better than ever. Amy’s attempt to convince Jake that he’s been in a coma for 7 years with an elaborate set that evokes Mission: Impossible is a great gag, even if we see it coming. Same for Terry thinking that he’s in a fake interview, getting tricked into believing that it’s real, only to ultimately find out it was fake all along. Even chaotic Gina reappears to get in on the action. In the end, a combination of Bill and a returning Hitchcock win the grand heist, and Jake must crown Hitchcock’s sweaty butt-head. Jake complains that it feels wrong, but trust me, it’s just right.

With shows as long-running and beloved as Brooklyn Nine-Nine, it can be difficult to stick the landing. However, Brooklyn Nine-Nine feels like they get as close as possible with the final conversation between Jake and Holt. Even with all the will-they-won’t-they between Jake and Amy, ending satisfyingly with their marriage, the relationship between Jake and Holt was always the emotional core of the show. Their final conversation hits home because Andre Braugher and Andy Samberg sell the moment masterfully. It reads not just like two characters realizing how much of an impact they’ve had on the other, but also like two actors realizing they brought the best out of each other for eight seasons. It’s good stuff. So Season 8 of Brooklyn Nine-Nine wasn’t the triumphant victory lap that it should have been, but “The Last Day” absolutely sends off our favorite precinct with grace, humor, and heart. “Silly cops” is how Bill Hader once dismissively ripped on Andy Samberg at a Comedy Central Roast, and in today’s climate, it’s probably never felt more biting, but Brooklyn Nine-Nine was always something more. The series was rarely ever less than a feel-good ensemble that made you think, made you laugh, and made you start dropping “Cool cool cool” into daily conversation. It will be missed, but it went out beautifully. NINE-NINE!