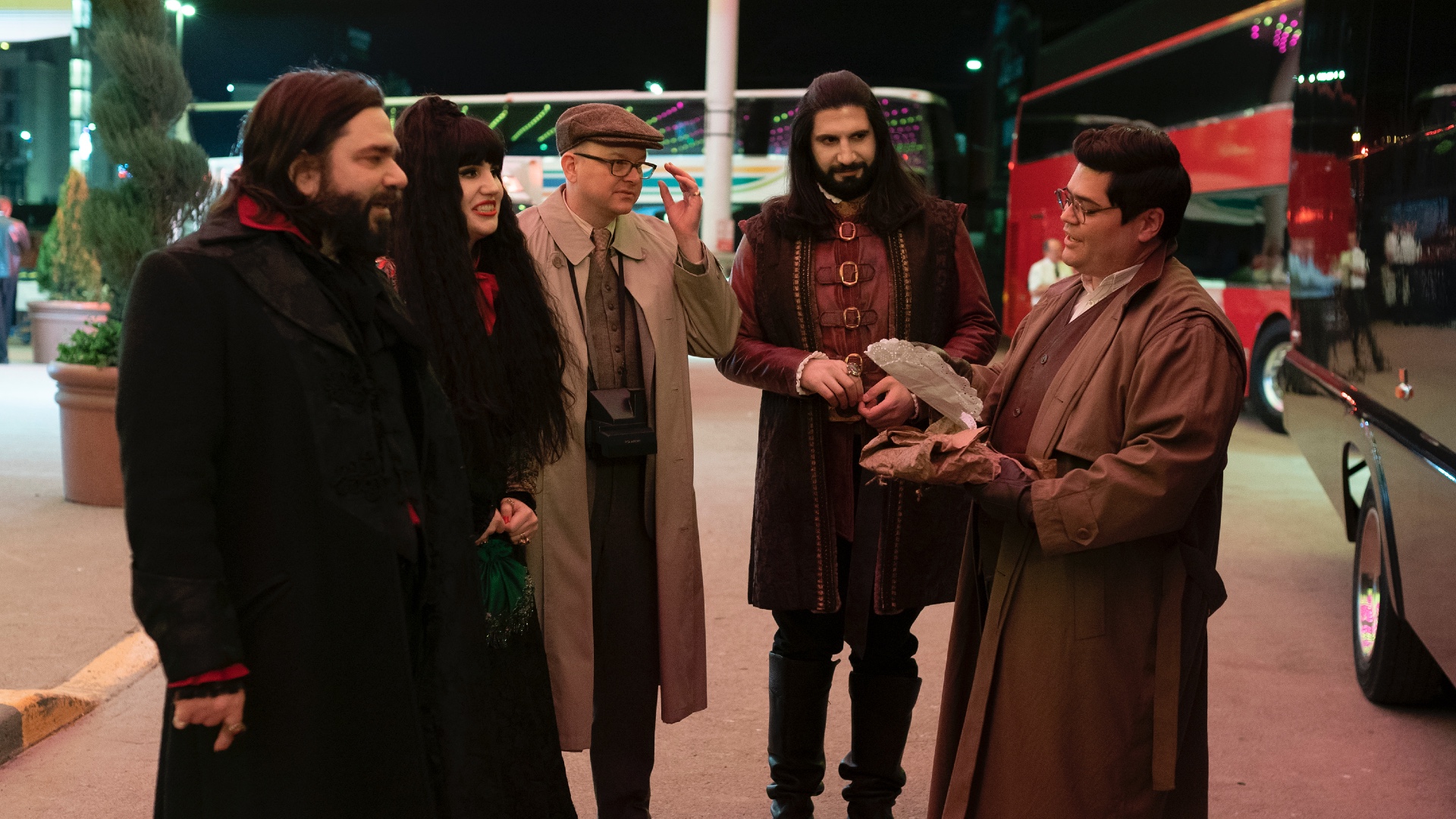 What We Do in the Shadows Season 3 Episode 4

A coastal resort destination like Atlantic City might not seem the wisest place for a vampire to vacation, but it pays off in “The Casino.” The Staten Island vampires may be shirking their duties on the Vampiric Council, but What We Do in the Shadows  season 3 episode 4 benefits from the change in scenery. This is especially shattering for Nandor (Kayvan Novak), who learns during this episode that the world is not only round, but also not held up on the shoulders of four mighty elephants.

The fang gang, plus energy vampire Colin Robinson (Mark Proksch) and familiar-turned-bodyguard Guillermo (Harvey Guillén), are invited out by their favorite neighbor, and Laszlo’s (Matt Berry) best human friend, Shaun (Anthony Atamanuik). He and his, also human, wife Charmaine (Marissa Jaret Winokur) are celebrating their wedding anniversary and put together an 11-person junket. Shaun was inspired by Ocean’s Eleven, which gets laughs all around from Laszlo.

Just when you think that’s about as far as that joke goes: ding-a-ding-ding, Nadja’s (Natasia Demetriou) got the voice of the Rat Pack, and wants their cash. She apparently knew Ol’ Blue Eyes and the gang around the time they were making the original Ocean’s Eleven, but the Rat Pack tribute act are barely recognizable to her since they are merely a tribute act. What’s more surprising is Nadja doesn’t ring any bells for them when she thrusts her best side forward. This is one of the funniest of the visual gags, so watch for it. She and Laszlo begin the journey excited by the possibilities of the “Mecca of the Depraved” and America’s “premiere playground of hedonistic debauchery.” Each sees a particularly seedy byproduct of Sin City by the Atlantic.

Laszlo sees the shadier side of his friend Shawn, who turns out to be a degenerate gambler who loses his entire savings at the casino. Rather than making the money back in some kind of Ocean’s Twelve heist, which we are vaguely led to believe, the vampires do something unexpected. They steal the scam from a different movie: Let’s Do It Again (1975). To paraphrase The Simpsons’ Abe Simpson talking about a sting he stole from The Sting II: the film stars Bill Cosby, so no one will ever admit seeing it. Without giving too much away, it involves boxing, betting and hypnosis. Also unexpectedly, the idea comes from Guillermo.

The vampires make an almost feeble effort to reach out to Guillermo. As Colin says, companies he works at do it all the time. They treat their employees like family so they are more motivated to ignore their real families. The restaurant scene where the vampires try to feign interest in Guillermo’s interests is short of agonizing. He squirms deliciously under questioning which gets more and more intrusive, inappropriate and embarrassing. His best retort comes after Nadja asks if he has a “chubby” girlfriend he’s hiding somewhere. Guillermo wants to know why she’d have to be chubby.

Vampires need to travel with the dirt of their ancestral lands. Much is made of this as Nadja, Laszlo and Nandor are packing it up, and spreading it out on the beds in their hotels. This tradition, or curse, goes back to Bram Stoker’s Dracula, who had boxes of earth dragged in from Transylvania to Whitby Abbey. It cost a fortune then, as procured by the vampire genre’s original familiar Jonathan Harker, and it runs into a small fortune in “The Casino,” as Guillermo is sent on a journey to the four corners of a round world on a quest to claim the dirt of each of master’s birth lands. Adding to the joke is the idea Guillermo could just have taken a ride to the house on Staten Island in a fraction of the time. This is never mentioned, as it would never occur to any of the vampires, which only enhances the inherent absentmindedness of the immortal characters.

The three bloodsucking vampires experience a harrowing close call when they are deprived of their dirt. They lose the powers of transformation and hypnotic influence, leaving poor Nadja to her natural charms, which boil down to baseless threats uttered from various prone positions. It’s almost sad and pathetic, but it seems to work for her. Hopefully this is a one-off problem and she doesn’t come to find being pitiful is one of her superpowers.

Colin only watches the 24-hour advertorial channel which explains the features of the luxury hotel on a constant loop. This is mildly annoying to the vampires around him, and must provide sustenance, but Colin really seems to be enjoying the show. This works when he’s so involved in the in-house mini-program he doesn’t notice his roommates’ native soil being vacuumed away by the cleaning crew. But it makes you wonder if, as Colin approaches his hundredth birthday, he needs to get out more.

The problem with energy vampires, as a comedic concept, is finding new ways to make boring things interesting. And here we see it played out from the innermost being of the character. Colin is interested in boring things. He doesn’t even achieve a level of ennui, the suggestion every improv comic dreads when asking the audience for an emotion to play. On one hand, you might think Colin has achieved a level of Zen which is rare and possibly enviable. On the other hand, Buddha appreciated a good joke. He’s always grinning. Colin is barely able to register a smirk.

What We do in the Shadow works best when it is at its most ridiculous, combined with the most mundane. Nandor’s obsession with the Big Bang Theory slot machine is a good example of this. He appreciates how the show captures the energy and feel of the game, and identifies with Sheldon, who he pegs for the leader of the TV show’s group, because he is the tall one. The education he gets from Colin, on the big bang reality of the creation of the universe, is actually quite emotional. The former warrior is on a path to some kind of self-discovery this season, he continually slides into periods of morose reflection.

The vampires are growing in season 3, and the exercise and location shots work wonders for them. It is interesting to watch them interact with humans they call friends, and even go out of their way to do a good deed. The best thing about that is something we only hear in the fade, as Shaun drops the whole bundle on 12. “The Casino” is a sure bet for What We Do in the Shadows, and kibitzers on the line.