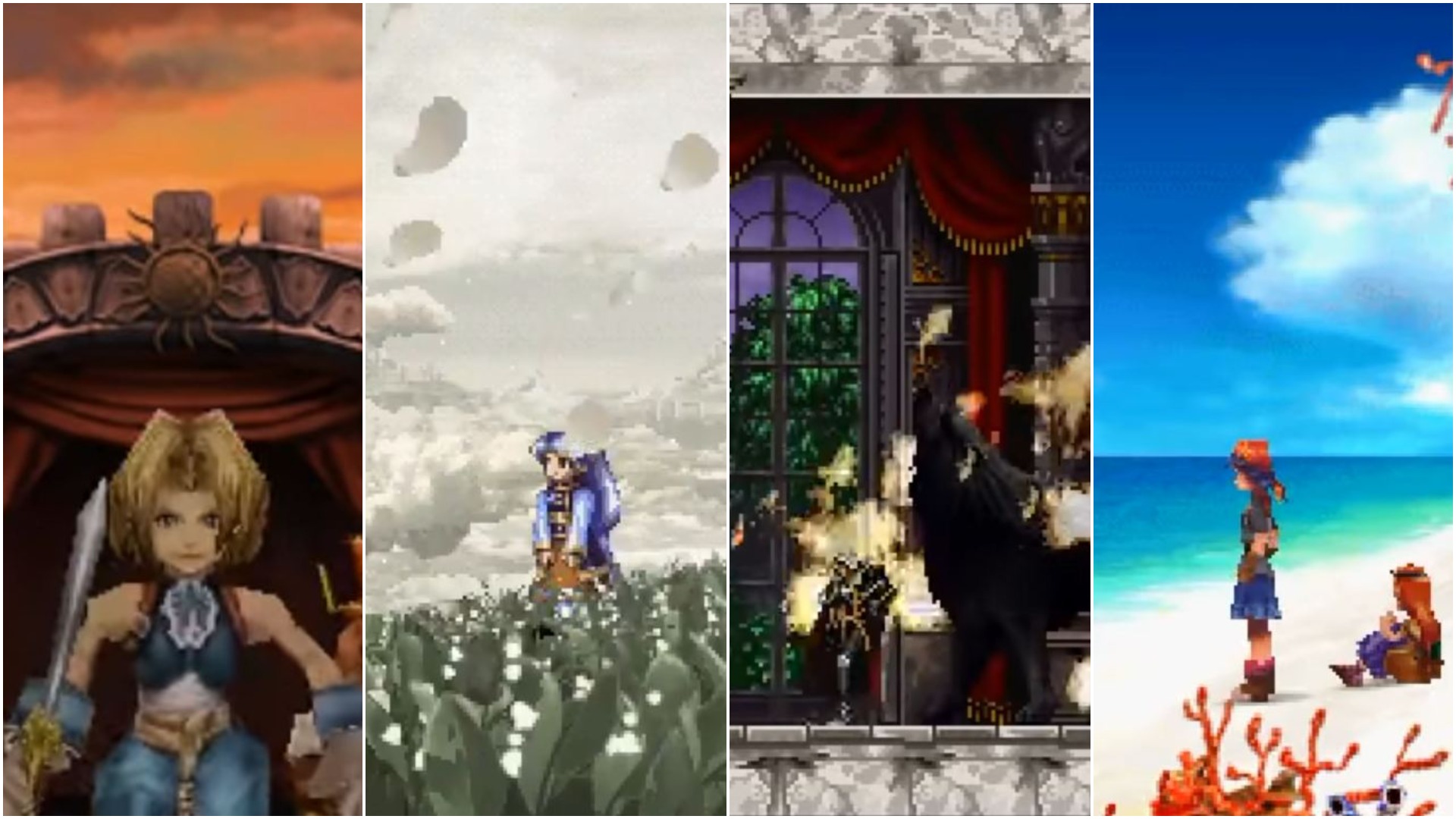 In our look at the best Super Nintendo RPGs ever, we mentioned that the SNES is arguably the greatest RPG console in video game history. Well, if there is a console that makes that discussion an argument, it would have to be the PlayStation One.

With a lot of help from Square, Sony quickly established the PlayStation as not just the home of incredible RPG experiences but as a console that was capable of effectively convincing people who previously had no real interest in RPGs that they absolutely needed to devote 50+ hours of their life to the next gaming epic. That sudden rise in genre popularity inspired some of the industry’s greatest RPG developers to try to outdo each other creatively and commercially.

The result was a classic collection of role-playing experiences that still rank comfortably among the absolute best ever made. With due respect to the 20+ other games that deserve to be on this list, these are the 15 best PS1 RPGs ever made.

15. The Legend of Dragoon

The Legend of Dragoon’s legacy has only grown since the game’s late 1999 release, and it’s not hard to see why. While this game was initially criticized for not living up to the standards of some of the other PS1 RPGs we’ll soon be talking about, time has been kind to the various things this game does so very well.

The Legend of Dragoon makes up for its slow story with an incredible combat system that emphasizes an almost QTE-like mechanic that helps ensure you’re rarely simply watching a battle play out. This RPG’s character transformation mechanic is also one of those brilliant gameplay concepts that should have been copied many times since this game’s release. There’s also always been something special about the fact that Legend of Dragoon‘s ambitious CGI cutscenes ensured this epic spanned four PS1 discs.

Wild Arms is another one of those PS1 RPGs that were initially overshadowed by some of the all-time classic games it had to compete against, but the thing that stood out about this title at the time is the thing that still makes Wild Arms special to this day: its style.

Wild Arms‘ blend of sci-fi, fantasy, and western design concepts shouldn’t work nearly as well as it does here. Developer Media.Vision deserves a lot of credit for ensuring this game’s ambitious world always felt cohesive and for finding some truly clever ways to subvert genre expectations through this title’s approach to exploration, combat, and puzzles.

The Breath Of Fire III vs. Breath of Fire IV debate will likely not be settled here, but the third entry in this series ultimately gets my nod due to the ways it so clearly raised the bar for this franchise and its genre competition.

Breath of the Fire III’s 3D visuals and voice acting helped sell this game’s engaging story, while the game’s combat and wonderful cast of characters ensured you were constantly engaged and ready to see where this absolute gem was going to take you next.

Front Mission 3 rewards players willing to put the time into its fairly complex mechanics and deep storyline with one of the best tactical RPGs of the era and one of the best mech games ever made.

This game is rightfully remembered for its customization options and often punishing tactical gameplay but I don’t know if it gets enough love for its faction-driven narrative and the ways its visuals convey epic mech battles without relying on more traditional action gameplay.

11. Castlevania: Symphony of the Night

The only reason this all-time great game isn’t higher on the particular list is that there are just other PS1 RPGs that better represent the genre and the kind of epic experiences we think of when we think of one of the best RPG platforms ever.

Having said that, the way that Symphony of the Night incorporated RPG elements not only changed the franchise forever but eventually helped inspire developers everywhere to enhance their own action titles by utilizing role-playing mechanics. This is still one of the best blends of role-playing and action/adventure ever made.

Long before God of War took us on a journey through Norse mythology, Valkyrie Profile caught many PS1 gamers by surprise with its unique blend of Japanese design and a Norse narrative that tasks you with assembling the perfect party of heroes to assist you through Ragnarok.

Valkyrie Profile‘s true calling card, though, is its turn-based combat system that essentially assigns a button to each character in your party. Getting the most out of your party of heroes requires you to successfully assign each character the right actions at the right time in order to unleash powerful combo attacks. It’s complex, original, and a whole lot of fun.

Lunar: Silver Star Story Complete may have started off as a Sega Saturn title, but it’s hard not to ultimately remember this as a PS1 game due to the many ways that Sony’s first console allowed Lunar’s developers to share their full vision for this classic.

It’s true that Lunar is an “old-school” JRPG in a lot of ways that might turn some people off, but when level grinding, party management, and methodical turn-based gameplay are done this well, it’s hard not to see this as one of the ultimate genre comfort zones.

Really, though, this game’s incredible number of possible conclusions just highlights the various ways this sci-fi/fantasy title makes you feel like every action you do truly matters and that anything can happen. I also have to pay respect to this game’s brilliant “private action” system: a unique mechanic that allows your party members to have their own adventures that ultimately contributes to some of the best sidequests in RPG history.

Xenogears features a fascinating blend of styles and mechanics that is quite appropriate considering the details of this game’s complicated development history (it started off as a pitch for Final Fantasy VII before briefly being designed as a Chrono Trigger sequel). Admittedly, there are times when you can tell this game is trying to find its creative voice and gameplay footing.

Yet, all the concepts this RPG touches upon ultimately come together to form something wonderful and memorable. It features one of the best ATB combat systems ever, a complex and creative story, a lot of heart, great visuals, and a truly incredible soundtrack. Sure, the game struggles a bit in the second half, but it’s easy enough to overlook those shortcomings as the byproduct of ambition.

Final Fantasy VII should be a victim of its own success. After all these years, all the praise, and all of the discussions, you would think we’d be at the point where the dreaded term “overrated” might linger just above this game’s legacy.

That’s not the case, though. Maybe Final Fantasy VII was eventually surpassed, but it’s truly tragic to imagine what RPG gaming in the ‘90s and early 2000s would have been like if it wasn’t for this game. It alerted millions to the fact they loved video game RPGs, and it did it without sacrificing depth, quality, heart, or ambition.

Considered by many at the time to be the best tactical RPG ever made, it has to be said that the most impressive thing about Final Fantasy Tactics is the fact that it’s still difficult to argue against this game’s claim to that title nearly 24 years after its release.

Final Fantasy Tactics‘ surprisingly accessible (yet still deep and rewarding) gameplay perfectly complements its colorful visuals, engaging character, and surprising story. I don’t know if it’s the best tactical RPG ever made, but it may always be seen as the standard in the eyes of many.

It feels like people have been waiting for Vagrant Story to get the love it deserves ever since the game was released in 2000. While Vagrant Story absolutely has a cult following, it seems pretty clear at this point that it’s just never going to reach that level. It’s too difficult, too different, and it will probably never get the remaster it deserves.

However, those who have played Vagrant Story know it was Square’s most mechanically ambitious and unique PlayStation RPG. From its stunning visuals to its deep combat and mature narrative, Vagrant Story has honestly aged better than all but a few of the games of this era. A game this different and innovative shouldn’t feel as complete and confident as it does.

From the moment Chrono Cross was released, it feels like the first line about this game has been that it disappointed those who were expecting a direct follow-up to Chrono Trigger. Even when we learned that the Chrono Cross team never really saw this as a Chrono Trigger sequel, Chrono Cross still lived in the shadow of its all-time great predecessor.

Maybe there are ways that Chrono Cross would have been better off sticking closer to that SNES classic, but even at the time of its somewhat controversial release, many praised Chrono Cross for its innovative combat, weird and wonderful story, large cast of characters, music, visuals, and commitment to defying expectations at every turn. This shouldn’t be your first PS1 RPG, but it might be the one you end up remembering most fondly.

Final Fantasy IX was essentially Square’s PS1 swan song. While the title’s return to the medieval fantasy style of classic FF games highlights the studio’s jovial mood at the time, the fact is that many people wondered if Square could recover from the controversial Final Fantasy VIII and produce an RPG that effectively ended their unbelievable run of hits in style.

The fact they managed to do just that is an accomplishment that should never be overlooked. To this day, I struggle to think of even a handful of RPGs that challenge Final Fantasy IX’s charm, humor, and cast of characters while still providing a role-playing adventure that will feel rewarding to veterans and newcomers alike. This is an across-the-board triumph that delights and impresses in equal measure.

Suikoden II was pretty much “doomed to fail” from the start. It was released in the wake of Final Fantasy VIII’s massive debut, wasn’t widely distributed, and featured “retro” graphics that initially turned quite a few people off at the time of cinematic PS1 visuals. It didn’t help that its predecessor was a very good, but not great, RPG that also failed to find a wide audience.

Yet, Suikoden II is quite simply one of the best games ever made regardless of genre. I would love to tell you about its nuanced and deep politically-driven narrative, varied combat system, minigames, world-building elements, and score, but how long can you really talk about Suikoden II without getting around to its cast of over 100 recruitable characters and the ways Konami managed to make each and every one of them (as well as their interactions with each other) among the best of their era?

I wouldn’t call this a perfect game, but at the same time, I’m struggling to think of a single thing I’d change about it.

Is This Succession Character Harboring a Painful Secret?
Gunther’s Millions: The True Story Behind Netflix’s Rich Dog Docuseries
The Last of Us: How Long Does It Take to Beat the Games?
Comic To Screen | The Sandman | DC | #Shorts
The Yellowstone Universe Doesn’t Need Yellowstone Anymore