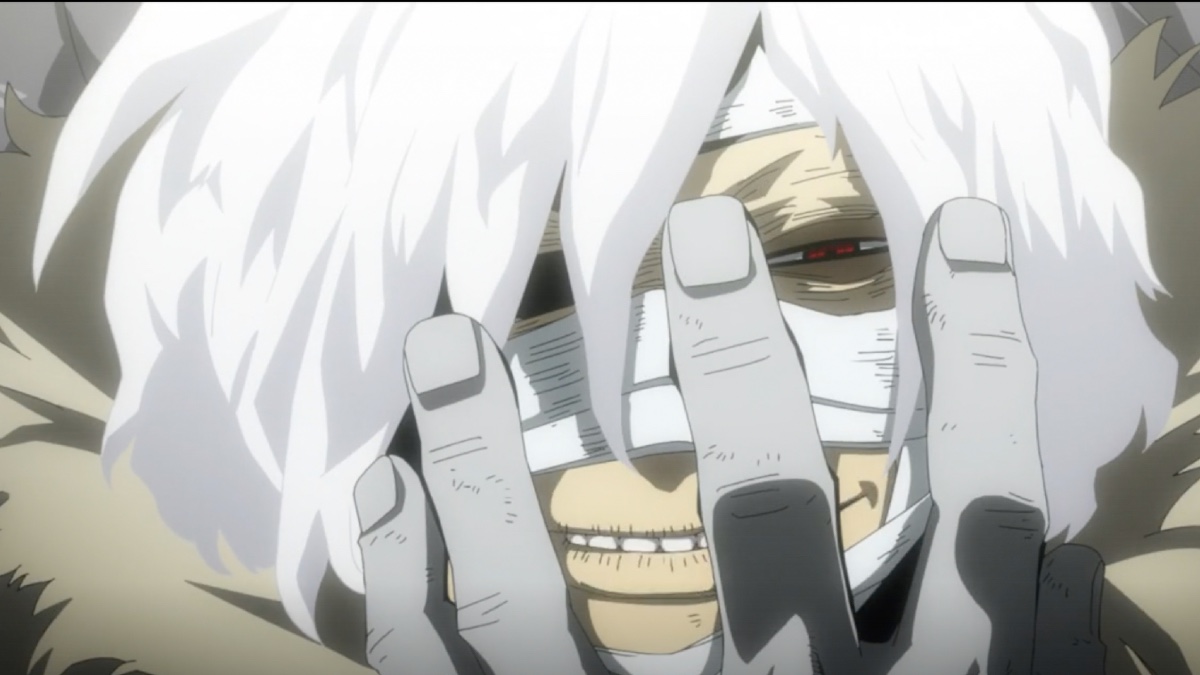 “I wonder if this itch would have stopped…”

Hey, remember when this was a show about plucky heroes?

Picking up on the powerful revelations and themes that the previous episode “Tenko Shimura: Origin” establishes, “Tomura Shigaraki: Origin” continues that chilling story in order to tell the grander narrative of the Symbol of Fear’s birth. This episode is a heartbreaking look into Shigaraki’s first steps as a villain that’s contrasted with his current destructive war against the Meta Liberation Army. In the previous episode, Re-Destro teases that Shigaraki was experiencing an awakening and “Tomura Shigaraki: Origin” brings it to fruition.

My Hero Academia’s previous “Tenko Shimura: Origin” told one of the series’ darkest stories that already casts the series’ major villain in a new light. However, “Tomura Shigaraki: Origin” hits equal levels of nihilism as it looks at the character’s official start as a villain now that he’s been removed from his roots as an innocent child. Both of these episodes hinge on Tenko Decaying individuals, but this time around it’s an active choice that he takes ownership over as he embraces his purpose in life.

Shigaraki’s unflinching origins create further parallels to Deku’s journey, only at opposite extremes. All Might’s protégé is trained to become an inspirational figure through the Number One Pro Hero’s teachings, yet each of All For One’s lessons to Tenko infect his mind and make him more susceptible to chaos. This backstory is so moving and provides crucial context to Shigaraki that it would have been interesting to see how My Hero Academia would have functioned if it actually featured these events throughout the series alongside Deku’s accomplishments.

A negative influence can be an incredibly dangerous thing, especially to a child who’s lost his entire family. All For One takes advantage of Tenko’s vulnerable nature, repurposes his pain, and gives him meaning. That’s not to say that Tenko’s glee over his gruesome destructive powers isn’t genuine, but he also acknowledges that if someone else had taken him under  his wing instead of All For One then these impulses very well might have been quelled in favor of a more productive direction in life.

My Hero Academia achieves a very chilling atmosphere that’s reflective of the unnerving relationship between Hannibal Lecter and Will Graham. Tenko is presented with a clear obstacle, but because this is a look into his development as a villain it’s immediately clear that the bullies are going to be murdered at some point. They’re grisly deaths are inevitable, but what’s even more uncomfortable than their deaths is how All For One fosters trust in Tenko and teaches him that this retaliatory behavior is his duty. He has no chance at escaping this fate and it’s devastating to see just how early Shigaraki has been All For One’s pawn. The moment where All For One gives Tenko his new name as “Tomura Shigaraki” is like when a cult leader dehumanizes their subjects.

All For One recognizes the pure ruin that Tenko is capable of and he carefully finds subtle ways to activate the child’s pain and push him further towards villainy. All For One curates which hands adorn Shigaraki, specifically because they trigger different emotions in him. Every element of Shigaraki’s creepy villain persona has actually been meticulously cultivated by All For One to not just be intimidating to the public, but to repress Shigaraki’s ability to resist his fate as the Symbol of Fear.

Shigaraki has spent his life lost somewhere in subconscious ambivalence where he hasn’t allowed his Decay Quirk to hit his apex and for his mind to abandon the past. In “Tomura Shigaraki: Origin” when Shigaraki consciously decides to destroy his father’s hand it’s because he proves to himself that not only is his future unnecessary, but so is his past, and all that matters is his white-hot hatred in this exact moment.

The remainder of “Tomura Shigaraki: Origin” is devoted to the riveting, cataclysmic battle between the League of Villains and the Meta Liberation Army. My Hero Academia has presented the aftermath of Deika City’s destruction from different perspectives before. In this sense, the audience may be prepared on some level for what’s to come, but that doesn’t make it any less horrific when Shigaraki completely frees his Quirk. He allows waves of destruction to wash over not only his Liberation Army opponent, but the entire city.

There are some very grand visuals as these two juggernauts take swipes at each other. Re-Destro’s Quirk continues to expand on itself in dangerous ways until he amasses a natural set of armor and accesses 150% of his power. This would cause most villains or heroes to retreat, but this strength only entices Shigaraki. He even equates Re-Destro’s Quirk to the heights of One For All, yet still isn’t phased in the slightest by Re-Destro’s demonstration.

While these two fight, Re-Destro reiterates that he wants to use his strength to liberate others through their Quirks, whereas Shigaraki purely wants to revel in destruction. These two villains push very different philosophies, but their similarities aren’t lost on either of them. Shigaraki, on some level, is fueled by All For One’s influence, just like how Re-Destro feels indebted to carry out his father’s goal for how to improve society.

The end of all of this desolation is actually somewhat anticlimactic. Even though Re-Destro is completely overpowered, his submission to Shigaraki feels slightly sudden. Shigaraki’s accomplishment still resonates due to the crucial context regarding his past that’s provided, but the balance here is skewed and “Tomura Shigaraki: Origin” would benefit from slightly more time spent in the present before Re-Destro admits defeat. It’s still a satisfying conclusion to this lengthy arc, but it’s just a little surprising how brief the actual battle between Shigaraki and Re-Destro is in a series that’s so preoccupied with combat.

This clash of Quirks and values doesn’t result in more lost lives, but it instead culminates in the birth of the Paranormal Liberation Front, a supergroup of villains that’s formed from the ashes of these two antagonistic organizations. Past alliances between enemies have occurred, but the Paranormal Liberation Front feels unique because they very consciously choose a name for their group which disposes of the restrictive label of “villain.”

The “My Villain Academia” arc has explored this perspective in great detail. These angry individuals are more empowered and united than ever before, but the fact that they no longer view themselves as villains, but rather liberators of society, is what’s the most frightening aspect of this new organization.

My Hero Academia could have easily coasted through this season without providing such a heavy look into its antagonists’ motivations and roots, but the approach has yielded some of the series’ most rewarding material. The anime is still lost in a showdown between two different dark forces where neither winner is advantageous for the state of society. However, episodes like “Tomura Shigaraki: Origin” generate just as much empathy and emotion for the series’ murderers than what was felt with Shoto Todoroki’s painful family drama during the Endeavor Agency arc.

It just goes to show how everyone has problems and internalized pain. In exploring this, My Hero Academia doesn’t redeem its villains, but it presents them in an enlightening new context that will only make the final showdown between Midoriya and Shigaraki, and One For All and All For One, carry even greater stakes.

Oh, and Himiko Toga is back in working shape, hungry for sushi, blood, and just as deranged as ever.

The Last of Us: What Happens to Bill and Frank In the Game?
The only way you’ll get me to run is if a Allosaurus is chasing me.🦖 #short #shorts #scifi
Best Nintendo Switch Settings You Should Be Using
Actual footage of me on the search to find the Westworld ending we all deserve 🙃 #shorts #dust
New Batman and Robin Movie, Green Lantern TV Show, and More Announced for Revamped DCU