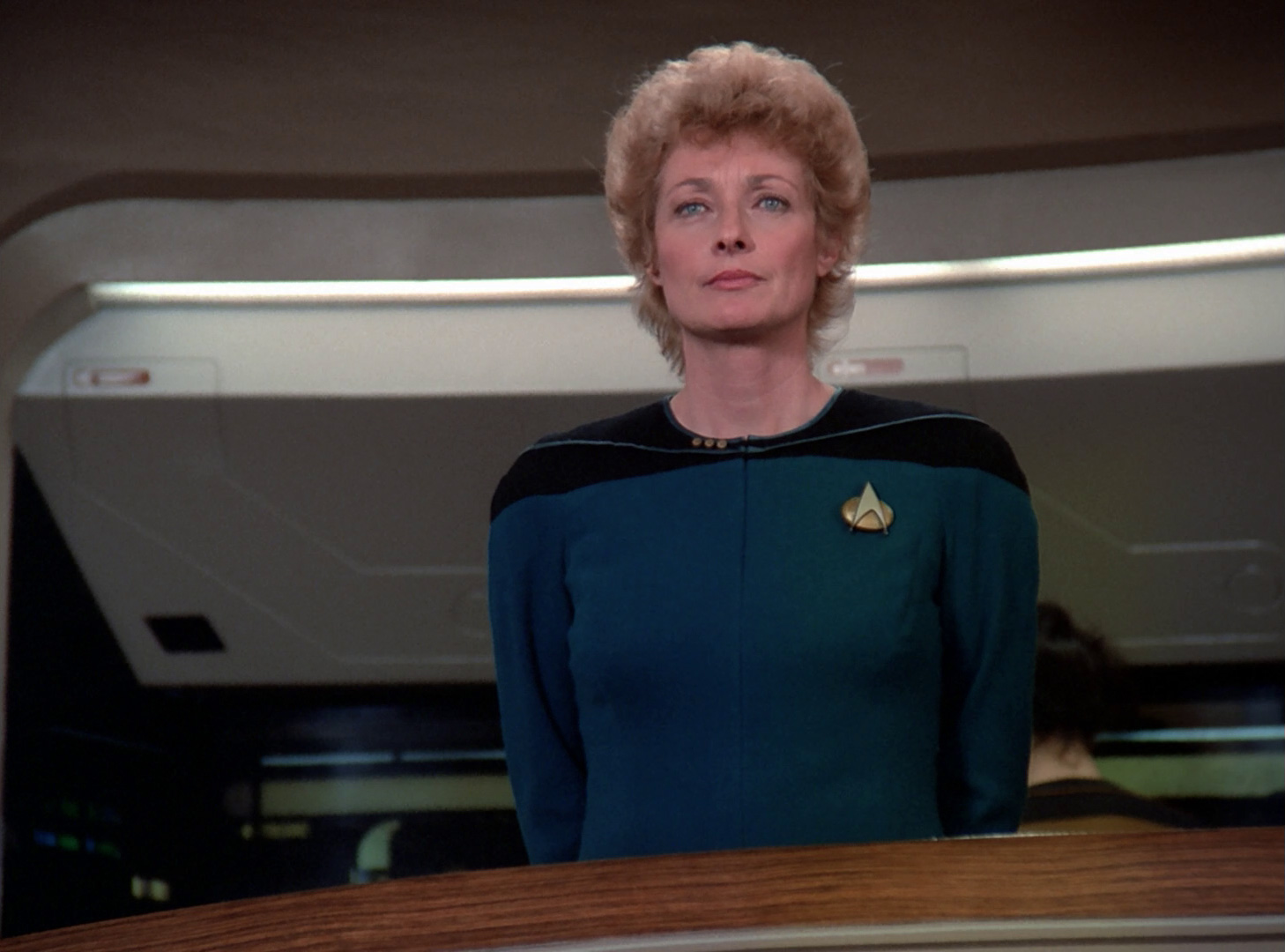 This Star Trek article contains minor spoilers for The Next Generation Season 2 and Lower Decks.

If you’ve been watching Star Trek: Lower Decks, then you’ve probably noticed that Dr. T’Ana is clearly based on the notorious Dr. Pulaski from Star Trek: The Next Generation. It’s not that Gillian Vigman is trying to channel the performance of Diana Muldaur—because she’s clearly doing her own thing—so much as the entire vibe of Dr. T’Ana is as though our collective opinions about Dr. Pulaski were channeled into a cranky, sentient cat-alien. Pulaski was human, but if you were going to reboot the character as an alien species in Star Trek, everyone would choose to make her a Caitian, or perhaps, the other cat aliens, the Kzinti. (There are a lot of cat aliens in Trek!)

The larger point is simple: Dr. T’Ana is, in some ways, a hilariously exaggerated version of Pulaski. But I’m here to argue that the actual character and impact of Dr. Pulaski are both much more nuanced than anyone remembers. Here’s why Dr. Pulaski was surprisingly pivotal for The Next Generation, and why you should never talk bad about her ever again!

The story of Gates McFadden being forced to leave TNG for its second season is not a pretty chapter in Trek history. Ideally, it just shouldn’t have happened. But, if we’re only focused on the fiction, the onscreen side-effects oddly created some realism. As Picard tells Wesley in the TNG second season opener, “The Child,” the unpredictability of getting new assignments is just part of what life in Starfleet is all about. The fact that Pulaski is simply assigned to replace Crusher and Crusher takes a job at Starfleet Medical is odd, but in life, these things do happen. People’s jobs change, and other people are brought in to replace them. Khan joked that “we are one big happy fleet,” but the stories of Starfleet are very close to fiction about workplaces. And in this way, the Pulaski transfer was relatable and down-to-Earth.

Arguably, Data was TNG’s purest representation of everything that everyone loves about Star Trek. Exploring the human condition through science-fictional means is what Trek is all about. Still, as outrageous as the concept of real humanoid robots are in real life, we tend to take them for granted when it comes to science fiction.

If Data were a real person, and you’d never met a sentient android, it would be mind-blowing to know him. The leap that TNG made with Data wasn’t just to convince us that he was artificial; somehow, that was a given. The idea that Data didn’t want to be thought of as artificial is what made him compelling. But, because the TNG crew all just accepted this right away, you could argue that some of Data’s story potential wasn’t really mined in Season 1.

Pulaski changed all that because unlike the rest of the crew, she didn’t accept the basic idea of Data right away. In her very first episode, “The Child,” Pulaski objects to Data comforting Troi during the birth of her baby, telling Data that Troi doesn’t want the “cold touch of technology.” Naturally, Troi objects and is fine with Data holding her hand while giving birth. In the same episode, Pulaski mispronounces Data’s name as “DA-TAH” instead of “DAY-TAH.” This leads to Data’s classic retort, “one is my name, the other is not.” By making Data stick-up for his basic Data-ness, Pulaski created a foil for the character, which only made the writing for Data stronger as the series went on.

Some might say the best Data episode ever is “The Measure of a Man,” which occurs during the second season. Although Pulaski is pretty nice to Data in this episode, it’s almost impossible to imagine this episode during a Crusher season. Even as Data accepts the possibility that Maddox may take him away and dismantle me, he quotes Dr. Pulaski when talking to Geordi, saying, “life is rarely fair.” Through her initial opposition to Data, Pulaski helped Data become more human in specific ways the other characters never could. She made Data stick up for himself. She also is the one who went to the holodeck with Data and Geordi to meet Moriarity in “Elementary, Dear Data,” and for that alone, she’s awesome.

Pulaski Was Better For Wesley

The season 2 premiere of The Next Generation, “The Child,” is a wild episode. Based on an unused script for the ill-fated 1970s Trek series Star Trek: Phase II, the story also has to convince the audience of three major changes in the status quo: First, this episode introduces Guinan (Whoopi Goldberg) and the basic concept of Ten Forward. Second, this episode introduces Pulaski as the replacement for Dr. Crusher. And third — which everyone seems to forget — this episode also had to figure out what Wesley’s whole deal was now that his mom wasn’t on the Enterprise.

Because Wil Wheaton’s Wesley was such a big part of the ethos of early TNG, it’s also easy to forget how much he became himself in season 2. After “The Child,” Wesley decides to stay on the Enterprise, which formalizes his role as an acting ensign in a way that the first season didn’t. Again, it’s hard to imagine this hitting the same way had his mom still been on the ship that year. Just by not being his actual mother, Pulaski’s presence allowed the character of Wesley to grow and change. No one would say that Wesley in season 1 is better than Wesley in season 2. And that fact is connected to Pulaski.

Pulaski Helped Shake Up The Next Generation

To be clear, it feels wrong to say that Pulaski should have remained a regular character on The Next Generation. Bringing back Dr. Crusher in season 3 works. The tapestry of TNG is so complicated, that, as Q taught us, pulling at one of these strings could unravel the whole picture. In other words, it’s hard to imagine early TNG shaking out differently than it did. The third season of The Next Generation is clearly the moment where the series becomes the confident and prestigious show we think of today. Season 3 wouldn’t have worked with Pulaski, but it’s possible it needed her to get there.

Just like Tasha dying in season 1 of TNG, Crusher’s departure in season 2 was useful in one: These events let the audience know that no character was safe. People could die. People could leave. And, in season 3, that meant people could get assimilated by the Borg. Pulaski’s presence in season 2 subtly helped push the show into darker and more serious territory. She wasn’t a good replacement for Crusher. The return of Dr. Crusher in season 3 is essential to making TNG what it became. But before that could happen, Pulaski had to arrive and make everyone uncomfortable.

In the Lower Decks Season 2 debut, Mariner joked about how Starfleet officers aren’t supposed to have interpersonal conflict. But, that’s exactly what Pulaski provided to The Next Generation. She was the lighting rod for conflict in the early days of this great series, and imagining its journey without her is impossible.

Star Trek: The Next Generation streams on Paramount, Amazon Prime, and Netflix.

Comic To Screen | The Sandman | DC | #Shorts
Arrow Season 6 Episode 16 Review & Reaction | AfterBuzz TV
Snowpiercer, Infinity Train and Other Erased Streaming Series You Can No Longer Watch
Why Dragon Quest Has Always Been So Much More Popular In Japan
Marvel Studios’ Ant-Man and The Wasp: Quantumania | Before