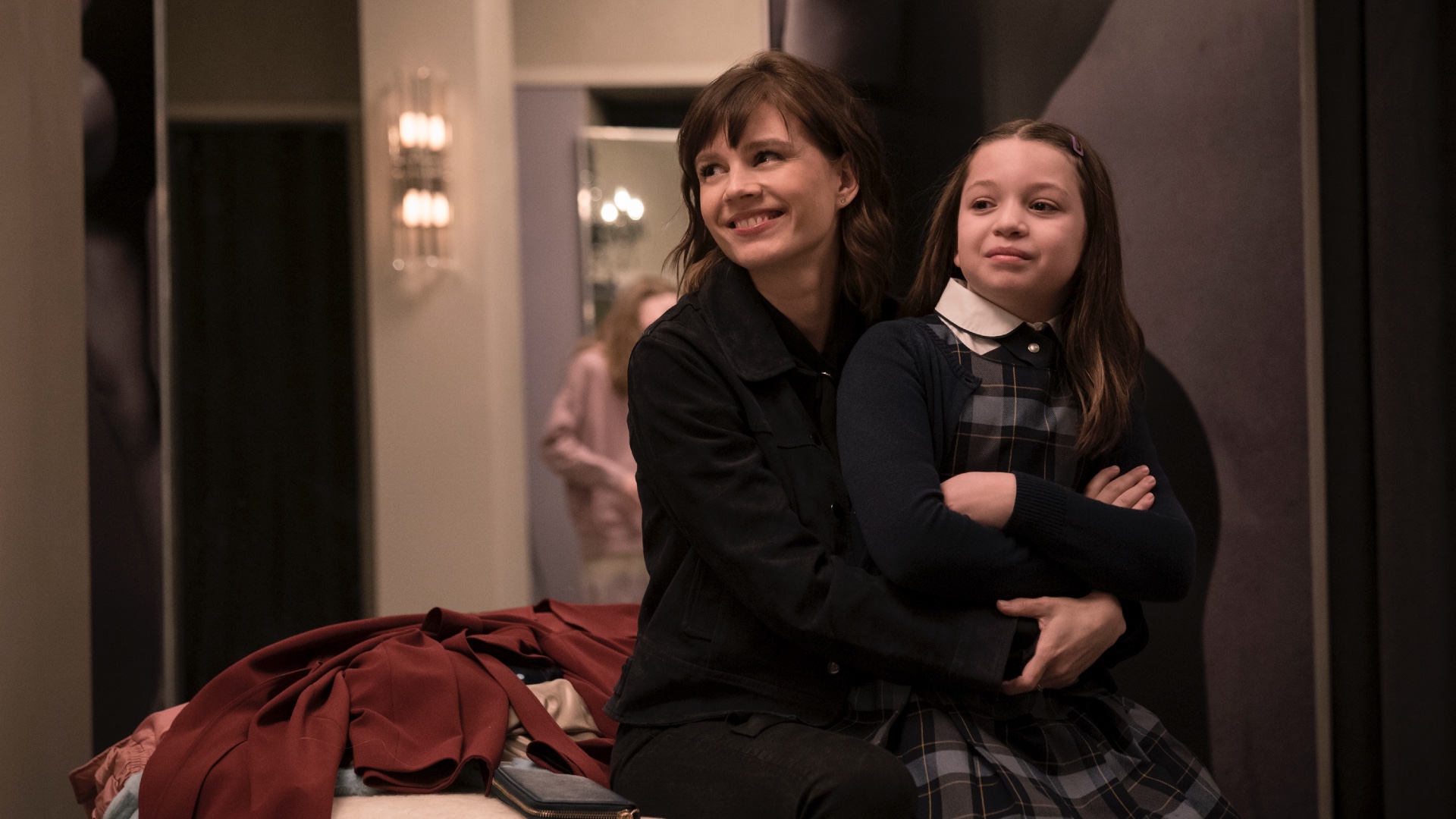 The supernatural investigative team at the center of Evil finally focuses its attention on the one almost-constant element in their probes: the clinic they believe is corrupting fertilized eggs. They believe RSM Fertility is a front for diabolical masters, working behind the scenes to bring about a dark future ruled by a malevolent generation of engineered children. The clinic has been helping women get pregnant for several years, and one of their first clients was Dr. Kristen Brouchard (Katja Herbers). She was so early in the fertility facility’s operations, the founding physician who was in charge “no longer works” there, according to the reception staff.

Kristen has been the center of many of the proceedings on Evil. Leland Townshend (Michael Emerson) was her nemesis before he became the team’s biggest headache. Many of the demons the team comes across tend to find a certain affinity with Kristen, and her mother, Sheryl (Christine Lahti), was dating the demonic minion, and has a few spooky dolls of her own. Maybe the Brouchard clan was the first family of RSM, and it is their blood which promises to infect future generations with insidious genetic material.

Evil season 2 episode 10 “O Is for Ovaphobia,” is a very dense installment, with several prongs to the action, and plenty of subtext. The producers give us a kidnapping, more than one conspiracy, and several supernatural events, and still have enough time for an education on body image issues. The episode is so thick with information, one of the characters needs two names, another grows a tail.

Body issues are covered on several fronts, and from entirely different vantage points. Kristen’s daughter Lexis (Maddy Crocco) is putting herself under a microscope and doesn’t like anything she sees. She had to have reconstructive oral surgery because she spouted the same protruding canines found in other children who were conceived with help from RMS Fertility. It’s not necessarily the teeth she’s having problems with so much as the distribution of her weight. Baggy sweatshirts can’t cover it, and plastic wrap doesn’t mask its telltale signs.

Ben’s (Aasif Mandvi) girlfriend Vanessa (Nicole Shalhoub) is dealing with a different issue. While still in the womb, her body absorbed the fetus of her twin sister, who didn’t remain dead. Vanessa feels her sister like a phantom limb, but lately the phantom has been taking center stage. While Ben suggests therapy, for what seems like a case of dissociative personality disorder, Vanessa opts for a more spiritual approach. Either the auras are horribly misaligned or the spiritualist’s invisible strings are set up perfectly, but Ben and Vanessa get their $350 worth. The bumping of the tables, and all the other seeming phenomena are old tricks in the spiritual trade going back to Helena Blavatsky of the Theosophical Society. There’s a reason most ads for psychics say “for entertainment purposes only.” Spiritualists have been rigging conjuring rooms long before clap-on lights.

Ben is appreciatively amused during the scene, and is visibly looking for the devices. It is interesting that the psychic appears to separate Vanessa from the ghost Maggie in time with our seeing Lexis grow the phantom tail.  But we should have guessed it wasn’t all peer pressure. Lexis is probably well below whatever the prime body mass index gauge for her size and height, but she’s taking lessons from an online influencer who augments her looks with whatever tools are available. There is an underlying sadness to all of this, but at least Kristen’s mother brightens things up.

After a scrumptious dinner of Baphomet-on-rice, Sheryl is ready to shoplift the perfect dress for her big “influencer party.” She claims to be drawn to Leland through their shared hatreds, but must be leaving something out. She does with everyone else. Attending the soiree, where Sheryl stands out in red against the all-white dress of all the other guests, are important people like formerly young rock star and perennially aging Pete Townshend. They don’t show him, though many will look up those stairs for a glance. I wonder if The Who’s guitarist and songwriter is related to Leland, and hope he will put in an appearance if he is. A quick one, at least.

Edward the influencer is exasperatingly ingratiating. He is a master of lofty small talk which says nothing at all. But the things he leaves out are more illuminating. The scenario which follows his and Sheryl’s business-over-drinks meeting is quite horrifying, especially as each point is spelled out as it goes along. But Sheryl doesn’t put the pieces together until she can’t move her legs.

There must be something far more sinister about Sheryl than we know. She burns what appears to be ever-increasing denominations of cash to her voodoo doll friend, Eddie, and she’s not above blood play. Tonight’s exchange seems to be exactly that, but we don’t know what went in and what came out. All we know is in the morning light, she’s not doing the walk of shame. The odd thing is, even after all Sheryl goes through, she doesn’t elicit much sympathy. We wince, we groan, but we don’t really care. She has objectified herself beyond empathy, and she doesn’t earn any points “boody-bop-bopping” out after a night of enforced fluid exchange.

The mystery of who is paying for Kristen’s eggs is infuriatingly bureaucratic and vaguely conspiratorial. “The world is coming to an end,” after all. Dr. Cara Autry (Francesca Faridany) turns out to be quite the elusive suspect even after she’s named. The fertility specialist goes on the offensive almost immediately after being found, threatening and bullying her way into a PR end run, only to disappear off the face of the earth.

David Acosta (Mike Colter) doesn’t have much screen time during the episode. He sets the investigation in motion, plays an overall oversight role, and leaves the events to play out as he observes them. The episode opens with Kristen becoming very defensive when asked about her daughter’s possibly psychotic behavior. While it’s probably unintentional, the scene where David and Kristen have to speak in almost inaudible whispers for fear of waking up an infant is very funny. We’ve heard some of the children who come out of RMS Fertility are at the very least borderline psychotic, and we are waiting for this not-even-a-toddler to go over the line.

One of the problems with Evil is how much each character is hiding from the other ones. David only hides his mysteries because much of what he is seeing defies words to express. He is openly grateful for the few opportunities he has with Sister Andrea, the only other person who has an inkling of what he’s wrapping his head around. The situation with Ben’s girlfriend has only just elevated to the point where he has to bring in his teammates, but he was also hiding his nocturnal demon visitor while she was still making booty calls.

Kristen, on the other hand, is actively and eagerly obtuse. She could give Johnny Tightlips on The Simpsons a run for his money. She doesn’t even bother to hide that she’s hiding it. When one of the other RSM Fertility mothers starts talking about fanged children, David can’t help but notice how much Kristen recognizes the situation. It must run in the family, because not only does she do it on a regular basis to her family, but they do it to each other. They all seem to have learned it from Sheryl, so maybe the pathological obfuscation has always been in the DNA. For all we know, Dr. Autry is saving Kristen’s last egg because it’s the only one the clinic has left with the evil gene.

“O Is for Ovaphobia” contains many fun details and odd twists, from Ben’s realization of how he’s been two-timing his girlfriend to the ritualistic fluid exchange being timed to begin at 11:11. Evil gleefully throws in subliminal ambiance in the most mundane ways. While the series, as a whole, leaves many loose ends scattered around, the atmosphere makes good use of them. It really adds weight to the question of why RSM Fertility won’t give up that last egg.