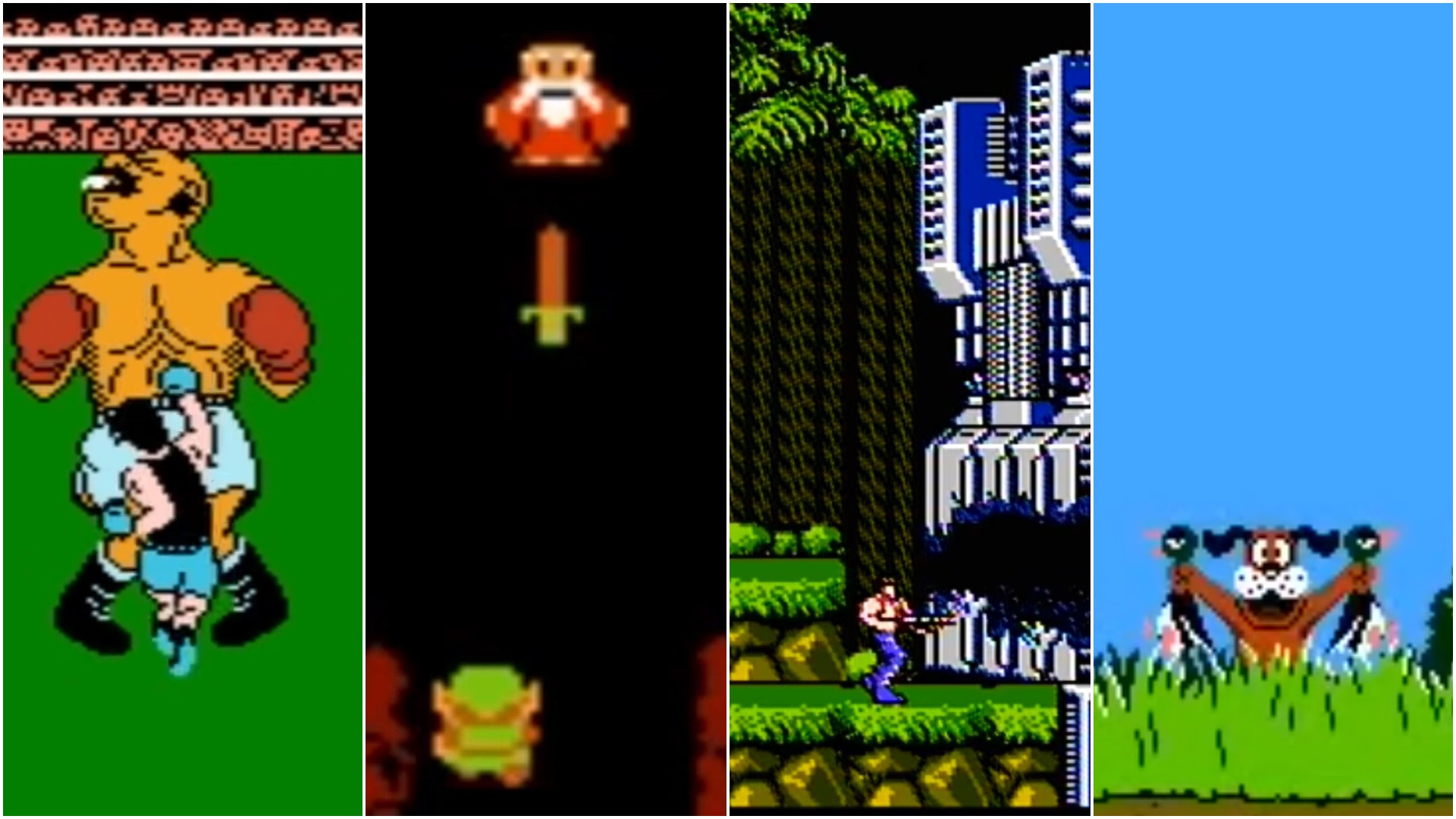 The Nintendo Entertainment System is the most important console in the history of home gaming. After the video game industry crash of 1983 and several years of arcade success, many still wondered whether video games still had a place in homes everywhere. Then, almost out of nowhere, Nintendo and the NES rescued our favorite hobby from the abyss and put it on the fast track to becoming the cultural cornerstone we know it as today.

The main reason for the NES’ massive success story was its enormous library of great titles. Many of Nintendo’s long-standing franchises got their starts on the NES, and while some of the console’s games have aged better than others, all of them deserve our love and respect for helping reignite the industry and kicking off the fun that would ensue for decades to come.

As tough as it is to choose between so many true classics, here is our list of the 15 best games released for the NES.

Originally released as an arcade game before getting an NES port in 1985, Duck Hunt is best known for its revolutionary use of the NES Zapper accessory. The famous add-on was essentially a plastic handgun with sensor technology, but it was a great example of the ingenuity Nintendo would later become famous for.

The subject matter may be a little uncomfortable for some given that attitudes towards hunting for sport have soured in many parts of the world in the decades since this title came out. If you choose to look past that, though, Duck Hunt proves to be a simple good time as well as a noteworthy predecessor to some of the company’s later interactive innovations such as motion controls and pointer tech on the Wii.

14. A Boy and His Blob: Trouble on Blobolonia

This underrated gem was released to mixed reviews in 1989. To be fair, there’s not much to this game’s core concept that isn’t spelled out in the title. It sees you take control of a boy and his companion: a metaphysical blob who will aid you throughout your journey.

However, this title’s mix of puzzle and platforming elements is quite dense for its era and holds up rather well. If you prefer, though, then you could always play the reimagining of this classic that was released on the Wii in 2009 with stunning hand-drawn graphics and a stirring score that perfectly accompanies this poignant tale of friendship and overcoming adversity.

The adventure of Pit and his quest to save Palutena gained more interest after those two characters were added to Super Smash Bros. series, but this game deserved far more recognition well before then. With its fascinating setting (mythology always piques our interest) and solid platforming mechanics, Kid Icarus is one of the more unique flavors to try out on the original Nintendo.

The franchise got an acclaimed Nintendo 3DS follow-up in 2012 in the form of Kid Icarus: Uprising: a title that expanded on the potential of the original and proved to be a much-needed modern take on the series. The controls also made that game were also quite difficult, which is at least a proper throwback to the surprisingly brutal challenges offered by this NES gem.

The developers of the most acclaimed football video game of the NES era actually managed to get copyright permissions from the NFL so that actual players and teams could be depicted on-screen. That feature, along with the ability for multiple players to get in on the fun, made Tecmo Bowl of the great precursors to modern professional sports franchises like Madden and NBA 2K.

A limited playbook that allowed for only a handful of run and pass options also contributed to the absurd abilities of legends like Joe Montana, Dan Marino, and, most famously, Bo Jackson. Trying to stop the Raiders’ legend in the open 8-bit field almost never ended well.

It wasn’t easy to pick the best racing game on the NES, but Excitebike comes out on top by just a smidgen. Not many racing games use motorcycles as their vehicle of choice, and most games of this era regardless of genre certainly weren’t bold enough to offer something as expansive and incredible as this title’s course creator.

Excitebike was even designed by an emerging Shigeru Miyamoto: the legendary creator of Super Mario, The Legend of Zelda, and most of our best childhood gaming memories. The game’s sharp controls reportedly even helped inspire the movement mechanics in the original Super Mario Bros.

If you take Tetris’s block puzzle-solving and add some Mario images and medical flair, you get the cult favorite that is Dr. Mario. The game substitutes Tetris‘ blocks for viruses and squeezes Mario into a lab coat to add a little personality to a fundamentally solid gameplay experience.

The Dr. Mario character was added to Super Smash Bros. Melee as a nod to the versatility of Mario’s occupational choices, and the game itself has been replayable on several of Nintendo’s later consoles. Regardless of when or where you play it, this puzzle game’s tight mechanics ensure its longevity.

While there were three Adventure Island games released for the NES, the middle entry in the trilogy is the most complete package in terms of refinement and entertainment value. The platforming is crisp and the new inventory system adds a welcome amount of depth to the overall experience. There are even four dinosaur buddies that can accompany the player in each level, which is a nice forebearer to what we’d later see in games like Donkey Kong Country.

What really gives this series an identity that separates it from other NES platformers, though, are its environment and storytelling elements. Putting a kid on an island and letting him explore the natural obstacles of the world is a nice deviation from the sci-fi and fantasy adventures that made up so much of the NES library. It is a niche series, but it’s also one that everyone should take a look at.

The original Contra was an ideal scenario for crossover fans of action movies and video games in the 1980s. The environments and weaponry, along with the studly protagonists that you could control, all made it feel like you were the star of the very own excessive ’80s action film.

The gameplay itself is always arcadey and fun thanks to its side-scrolling shooting that relies on upgrading guns and avoiding absurd amounts of incoming enemy fire. The game does feature a couple of other modes with different camera perspectives to spice things up, but the traditional Contra gameplay obviously holds up all these years later.

There is no sports title with better characters and more personality than Punch-Out!! Casting you in the role of Little Mac, the downtrodden tiny boxer with big dreams, this NES classic sees you fight your way through the ranks against an oddball lineup of antagonists. Pugilists Glass Joe, Bald Bull, and Mr. Sandman all made their debuts in this game and helped kick off this series’ proud tradition of over-the-top (sometimes stereotypical) antagonists.

Punch-Out!! is a great example of the original Nintendo’s ability to create vibrant characters out of 8-bit sprites that would go on to innovate and carve long-lasting legacies despite their simplicity. Even Mike Tyson has played this series!

Castlevania is one of the most beloved action-adventure platform series of the NES era, and the third game in the franchise is simply the series’ finest NES hour. With better controls and more power-ups, everything here is just bigger and more refined than in the previous two titles.

This one also gave rise to some non-linear exploring and multiple-ending storytelling; two concepts that would become significantly more popular in the SNES era and beyond. The game also introduced the character Trevor C. Belmont, who would later appear in several other Castlevania games and in Netflix’s hit animated series based on the franchise (and this game in particular).

5. The Legend of Zelda

The game that started Nintendo’s most critically acclaimed franchise was revolutionary for a myriad of reasons. It combined action, adventure, and storytelling elements in an early open-world environment that was both unforgiving and exciting.

The title hasn’t aged quite as well as other games we’ll soon be talking about, and Nintendo obviously improved upon this core concept in later entries, but the original still deserves acclaim for what it started. It’s truly amazing to play this game today and count the ways that it was so clearly ahead of its time.

Even after all these years and all the sequels, Mega Man‘s second adventure has never been topped. It added extra weapons and features to the first game’s already incredible action while retaining all the key platforming traits that made it famous.

The two biggest reasons for the enduring status of this game are its memorable collection of bosses and incredible music. Flash Man, Heat Man, and Wood Man are rank high among the series most iconic foes, and Wily Stage 1 is arguably the best song in the canon.

Samus’s first adventure has aged better than almost every other NES game by introducing the core components of the beloved and versatile Metroidvania genre. It also brought some much-needed science fiction adventures to the console at a time when the NES still needed some help in that genre department.

From the opening moments that challenged you to think about games in a new way to the famous ending that revealed Samus is a woman, it’s impossible to forget your first time playing this game. Even this game’s remake, 2004’s Metroid: Zero Mission, retained much of what made the original special while incorporating future franchise innovations and refinements.

Nintendo’s game-changing (literally) hit comes in second on our list of NES games thanks to its timeless soundtrack, innovative platforming legacy, and ability to be enjoyed by everyone regardless of age or experience. From grandparents to children, it’s hard to find someone who hasn’t played (or at least heard of) Super Mario Bros.

The iconic title has been re-released on so many of Nintendo’s other platforms that it almost feels limiting to call it an NES game. Its core controls and platforming gameplay are so enduringly fantastic that fans still make their own NES-style courses in Super Mario Maker and its sequel. This is the quintessential video game and always will be.

Although it isn’t quite as revolutionary as the original, Super Mario Bros. 3 is the best-made game on the NES by a good margin. It takes everything that made the original game amazing and combines those qualities with innovative ideas and intelligent refinements. It’s actually mind-boggling that both of these games were released for the same console considering how much more advanced this game is technologically and artistically.

Super Mario Bros. 3 also introduced many staples of the Super Mario series that are still enjoyed today. From the overworld map to the Koopalings to the Tanooki Suit, this sequel raised the stakes and honed everything into perfection. There is an argument to be made that this is the best game Mario has ever starred in, but for now, it’s enough to say that this is the best NES game ever made.