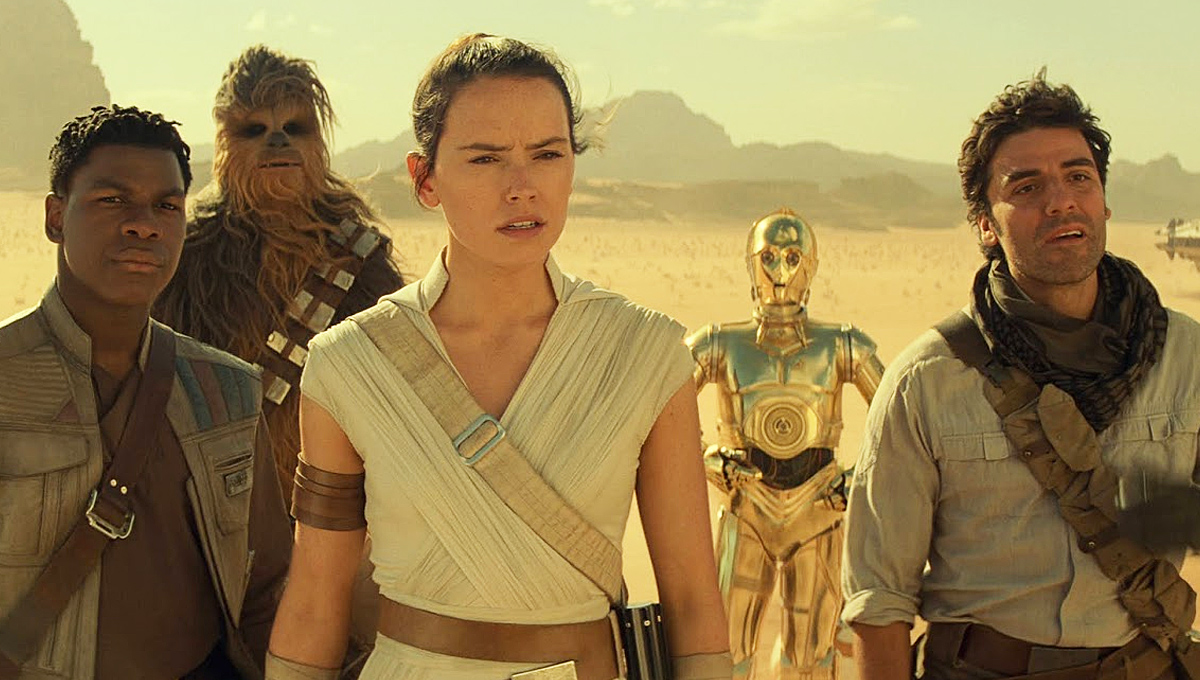 The divisiveness of the Star Wars Sequel Trilogy remains powerful nearly two years after its conclusion. Yet, as topically wide-ranging—and, in some cases, strangely political—as debates over the Disney-dealt follow-ups to the sacred Original Trilogy became, the cold-hard metric of box office grosses confirms their status as Star Wars’ least-lucrative mainline movies (excluding the anemic Solo). Now, the camp of sequel detractors has apparently gained a surprisingly authoritative ally in film editor Marcia Lucas, who, besides being the ex-wife of George Lucas, was a crucially grounding visionary in the franchise’s formation.

One of Star Wars’ early guiding forces, Marcia Lucas (born Marcia Lou Griffin), has offered some scathing criticism of Sequel Trilogy films The Force Awakens (2015), The Last Jedi (2017) and The Rise of Skywalker (2019), rife with the kind of adjectives that don’t beat around the bush. The stinging words stem from Howard Kazanjian: A Producer’s Life by J.W. Rinzler, a recently-released biography on the legendary, Lucas-collaborating film producer. In the book’s foreword, Marcia delivers a devastating rebuke (via Inverse,) of the franchise’s most recent films and their stewardship under veteran producer Kathleen Kennedy—albeit with the rhetorical analgesic of a complimentary preamble.

“I like Kathleen. I always liked her. She was full of beans. She was really smart and really bright. Really wonderful woman. And I liked her husband, Frank. I liked them a lot,” says Lucas. “Now that she’s running Lucasfilm and making movies, it seems to me that Kathy Kennedy and J.J. Abrams don’t have a clue about Star Wars. They don’t get it. And J.J. Abrams is writing these stories—when I saw that movie where they kill Han Solo, I was furious. I was furious when they killed Han Solo. Absolutely, positively there was no rhyme or reason to it. I thought, ‘You don’t get the Jedi story. You don’t get the magic of Star Wars.’”

Interestingly, Marcia Lucas’s role behind the scenes of the original Star Wars Trilogy—and the George-developed, Steven Spielberg-directed Raiders of the Lost Ark—as an editor and informal story consultant has only recently started to become widely known from a handful of tell-all books and behind-the-scenes television specials. However, it does seem clear in hindsight that the world-altering pop culture groundswell that was 1977’s original Star Wars was a gestalt effort that saw George’s early, allegedly-vague Flash Gordon-esque serial sci-fi designs refined by personnel such as producer Gary Kurtz and, most notably, Marcia. Indeed, as alleged, Marcia—as his wife—primarily possessed the clout to criticize George’s wilder, unfeasible ideas and constructively refine them in a way that bore pathos on the screen; the Apollo to his Dionysus, if you will.

However, the acrimony in their marriage metastasized beneath a public façade in 1982 during production of the trilogy closer eventually titled Return of the Jedi. In hindsight, this arguably affected the flow of the film, which is widely believed (an admittedly anecdotal qualification,) to be the weakest and most out-there entry of those first three films. Unfortunately, the chemistry that conjured some of the most beloved and influential movies of all time unceremoniously dissipated upon their divorce and professional split, which was announced shortly after Jedi’s 1983 release. In fact, a frequently-cited reason for the also-divisive direction of George’s eventual tenure on the 1999-2005 Prequel Trilogy was that their production occurred against an untenable dynamic, in which George bore unchecked power as director, writer and studio bigwig. Indeed, notwithstanding today’s newfound nostalgic love conveyed to the prequels, conventional critiques frequently point to convoluted plots, generally dry performances and artificial green screen aesthetics—aspects that conceivably could have been neutralized and/or salvaged by the splicing and advice of Marcia.

Contextually, Marcia’s Star Wars excoriation is being made nearly a decade in the aftermath of Disney’s 2012’s acquisition of Lucasfilm (and the Star Wars franchise as a whole) in a $4 billion deal that notably saw George capitulate any control he had over the franchise, business-wise and creatively. So, this is hardly a case of decades-preserved sour grapes being spewed onto an ex-spouse. Rather, it can be perceived as the case of the franchise’s de facto mother watching from afar as her child makes what she believes are terrible choices. In fact, she doesn’t mince words when addressing the elephant in the Sequel Trilogy room, Daisy Ridley’s Rey. While her status as the trilogy’s clear protagonist meant that she was destined to become a powerful figure, even proponents of the films have to admit that Rey’s rise was, in the very least, unnaturally quick, going in one film from solitude as a scrap salvager on desert remote planet Jakku to besting the powerful scourge of the galaxy at his own game—something that took Luke Skywalker three films to achieve.

Regarding Rey, she sounds off, “And they think it’s important to appeal to a woman’s audience, so now their main character is this female, who’s supposed to have Jedi powers, but we don’t know how she got Jedi powers, or who she is.” Marcia’s criticism is obviously destined to be met with opposition from the segment of the fandom that connected with Rey in a meaningful way. Yet, it is worth noting that Rey, by the end of 2015 sequel opener The Force Awakens, showcases an inexplicable preternatural ability in the ways of the Jedi, notably in the film’s climax, in which she—without any lessons whatsoever—picks up a lightsaber for the very first time to duel and defeat Adam Driver’s Kylo Ren, who—having been depicted as skilled and powerful throughout the film—had been trained in the Jedi arts throughout his entire life before his Dark Side turn. In conjunction with that, the scenes on the Millennium Falcon in which she is giving Han Solo advice on how to repair the ship has also facilitated claims of her being a “Mary Sue,” which refers to a know-it-all character without any substantive flaws, who is often a vicarious manifestation of the author.

However, the Sequel Trilogy initially seemed destined to laugh its way to the bank with the J.J. Abrams written/directed The Force Awakens going on to gross $2 billion worldwide, having tapped the well of nostalgia hard—so hard, in fact, that film’s structure arguably renders it a remake of the original Star Wars, a.k.a. A New Hope. Yet, as one could expect from a sequel that’s 32 years in the making, the movie manifested as a passing of the protagonist baton from returning heroes like Harrison Ford’s Han Solo, Carrie Fisher’s Princess Leia, Chewbacca, C-3PO and R2-D2 to a trio of new heroes in Daisy Ridley’s would-be Jedi Rey, John Boyega’s side-jumping former Stormtrooper Finn and Oscar Isaac’s heroic-but-cocky pilot Poe Dameron, along with rolling droid BB-8.

Unfortunately, the trilogy’s follow-up films would suffer from storytelling that went in disparate directions, first with 2017’s The Last Jedi, which saw writer/director Rian Johnson make bold, but controversial changes in tone and plot developments, specifically regarding Rey, who, in that film, seemingly had her Chosen One status revoked when she learned her parents where just ordinary people. Tellingly, that film yielded a box office decline, which saw it gross $1.3 million worldwide. Consequently, upon the abrupt removal of the third film’s appointed visionary, Colin Trevorrow, Disney brought Abrams back for 2019’s The Rise of Skywalker, which retroactively rescinded those developments in lieu of a hastily-concocted climax that revealed Rey to be the granddaughter of a clone-resurrected Emperor Palpatine, who, as it turns out, had been hiding behind the scenes manipulating the trilogy’s events the whole time. Additionally, she was given a pedantic, quasi-romantic connection to Kylo Ren as part of a “Dyad” of the Force. The result was a final box office whimper of $1 billion, cementing a steady decline that led to much soul-searching over at Disney.

“It sucks. The storylines are terrible. Just terrible. Awful. You can quote me—J.J. Abrams, Kathy Kennedy—talk to me,” says Marcia with an emphatic stamp. Yet, whatever one might think of the Sequel Trilogy, Rey or even Daisy Ridley’s performance, the bizarre malleability of her arc certainly boosts the point Marcia conveys about the weakness of her backstory. Indeed, the accelerated skills of a protagonist across multiple films (akin to Luke’s unexplained upgrade between The Empire Strikes Back and Return of the Jedi,) can be a forgivable offense if said skills drive the story forward. However, in Rey’s case, it seems to be an example of a character being driven by what’s expedient to the story.

For now, though, the Star Wars franchise is taking a break from the big screen as the recent success of live-action Disney+ television series The Mandalorian will soon yield subsequent offerings like The Book of Boba Fett (which will arrive in time for Christmas), Obi-Wan Kenobi and Andor. However, a monumental comeback is set for the far horizon when the Patty Jenkins-directed Star Wars: Rogue Squadron eventually hits theaters, the first of more films on the docket.

Sci-Fi Short Film: “Kinetic” | DUST
Hogwarts Legacy Review Roundup: Is This the Dream Harry Potter Game?
Why One of Star Trek: The Next Generation’s Worst Episodes Is Still Worth Watching
Why Dragon Quest Has Always Been So Much More Popular In Japan
The Snow Girl Ending Explained: Amaya, Murders, Season 2