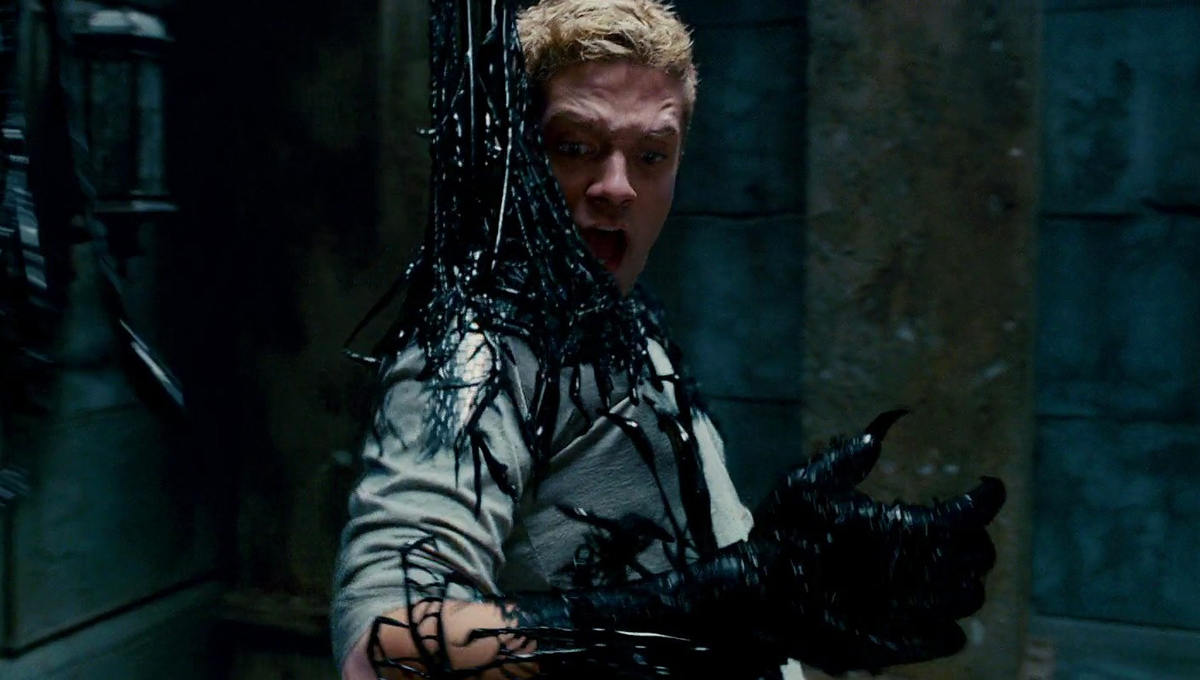 By now, Marvel’s Venom is principally associated with Tom Hardy’s hulking symbiotic solo-starring anti-hero movie protagonist. While lacking comic rival Spider-Man, the 2018 film delivered an exponential bang for studio Sony’s buck with an $856 million global gross, yielding imminently-arriving sequel Venom: Let There Be Carnage. However, with Spider-Man: No Way Home set to conjure a cavalcade of villains from past iterations, the notorious first live-action version of Venom, as played by Topher Grace, has entered the speculative conversation—albeit humorously. Ironically, the character’s punchline status could have been avoided.

Of course, said conversation on prospective returnees for Spider-Man: No Way Home is, naturally, dominated by speculation that current star Tom Holland will be joined onscreen by former Wall-Crawlers Tobey Maguire and Andrew Garfield. The notion is abundantly boosted by the film’s now-confirmed multiverse plot, which will bring about the return of some of their onscreen rivals, notably Alfred Molina’s Doctor Octopus (Spider-Man 2), Jamie Foxx’s Electro (The Amazing Spider-Man 2), Willem Dafoe’s Green Goblin (Spider-Man), and Thomas Haden Church’s Sandman (Spider-Man 3) is strongly believed to be in the film as well. However, while very few fans were expecting—or, let’s face it, asking for—Topher Grace’s Venom (Spider-Man 3) to be among the group, the actor fielded such a question in a recent Reddit AMA, yielding an elaborate, sidesplitting answer.

“Please keep it between us but yes, I am in it,” says Grace, digitally dripping with sarcasm. “The plot starts with Peter Parker (Tom Holland) bummed that everyone knows his identity and then some crazy shit happens with Dr. Strange and Dr. Octopus (Alfred Molina) comes into his dimension. Then Electro and the Green Goblin hop out of one of those ‘energy circles’ and they’re like “It’s spider stompin time”. Then Tom Hardy and I pop out and battle each other and I win (obvi), it’s like not even a fight I just kick his ass immediately. Not to give too much away but there are also some actors from the original 70s Spiderman show, Aquaman and Batman (Affleck, not Keaton) crossover, and thanks to Disney Han Solo’s ghost from Rise of Skywalker, and that Eve robot from Wall-E. Again, please keep between us.”

As hilarious as that franchise-crossing scenario would have been, Grace’s Venom is unlikely set for further appearances, lest Sony revel in one of its most monumental mistakes. Among the numerous critiques for the film, the overwhelmingly negative public perception regarding Grace’s role as Eddie Brock/Venom in Spider-Man 3 remains one of the most prominent. It’s something that he’s dealt with pretty much since the time of its 2007 release, and has since come to the kind of humorous acceptance of a laid egg that Ryan Reynolds wields regarding 2011’s Green Lantern. After all, the role took the fearsomely iconic breakthrough villain of artist Todd McFarlane’s legendary run on The Amazing Spider-Man and made him into a bitter nerd with frosted blonde tips who—upon inheriting the film’s hastily-introduced version of the alien symbiote—ramped up a petty professional grievance with Maguire’s Peter Parker in his costumed capacity as Spider-Man. Moreover, the film relegated the already-underwhelming depiction of the popular character to being an afterthought transparently jammed into a detrimentally-mounding array of storylines to a catastrophically brief, forgettable effect.

Contextually, the character’s labored inclusion remains one of the most famous examples of what can go wrong when a studio strong-arms a director—in this case Sam Raimi—over creative choices. While Raimi’s Spider-Man films were firing on all cylinders, creating unprecedented brand momentum—alongside contemporaries in Fox’s X-Men movies—for the burgeoning comic book movie genre. Nevertheless, he was facing pressure upon heading into the third film. While 2002’s original film was a monumental success that yielded $825 million worldwide, 2004’s Spider-Man 2, widely beloved as it may have been for its memorable onscreen scraps with Molina’s emotionally-potent Doc Ock, curiously came up short of its predecessor with $788.9 million. Thusly, producers were intent on reshaping Raimi’s original vision for the film, which originally would have seen his main villain, the Sandman (Church) complemented tangentially by the Vulture, a role for which Ben Kingsley was eyed.

As the story goes, producer and Marvel executive Avi Arad successfully pressured an initially reluctant, Venom-averse Raimi to instead use the character for an appearance, which ideally could have boost comic sales. Yet, it positioned the fan-favorite character as a subordinate on the narrative hierarchy to the main Sandman story, which bore a movie-dramatic narrative that stood in contrast from the comics, with the grain-shifting supervillain was revealed as the burglar who, years ago, killed Uncle Ben—albeit accidentally, and motivated by the humanistic desire to afford caring for his terminally ill daughter. Yet, the film already seemed to be full, especially with the trilogy-spanning storyline focused on the fated dissolution of Peter’s friendship with Harry Osborn (James Franco), and the inevitable climactic showdown between Spider-Man and a new Green Goblin, who seeks vengeance against the friend who he believes to be his father’s killer.

After some creative shuffling, the end result was a devastatingly disjointed Spider-Man 3 that, at its heart, centers on Peter Parker’s internal battle with his own growing hubris—in contrast to his self-torturous guilt in the previous film—as the public popularity of his web-swinging alter-ego reaches a fever pitch. Said battle becomes upgraded to an extraterrestrial scale upon his accidental joining with the meteorite-landed symbiote, which takes shape as a black version of his costume, yielding even more extraordinary abilities than he already possessed. However, while riding on the highest of highs, Peter’s life at the Daily Bugle makes him an enemy in fellow journalist Eddie Brock, who Peter exposed after he attempted to frame Spidey for crimes using fake photos; an act that landed Peter the staff position that Eddie coveted. Yet, what started as an unrelated side story at Peter’s workplace somehow becomes amalgamated with the film’s larger stakes—the Sandman and New Goblin—that necessarily dominate the film.

Notwithstanding its rushed nature and lack of visual comic book fidelity, the choice to cast Grace as Brock—at least in that initial capacity—was arguably apt, since this version of the disgraced journo, like Peter, is a nerdy white kid of similar background who’s simply looking for acceptance against overwhelming odds. The difference between the two, as exemplified by his fraudulent practices, is that Eddie is not above taking shortcuts where he can get them—an aspect of his character that foretells his fate. Fortuitously, upon his lowest of lows, he stumbles upon the ultimate shortcut when the symbiote—at this point rejected by Peter—finds a similarly-bitter host in Brock, thusly making him into the villainous Venom. Yet, on paper, this is an intriguing dynamic, with Brock/Venom set up as a villain who poetically parallels Peter during a crucial intersection of his crimefighting career, in which he finds himself resisting the use of his powers for self-gain and personal glory; temptation that manifested in the form of the symbiote before he came to a realization of its darkness.

Unfortunately, this Venom was made to fail for numerous reasons, notably the inherent issue that Spider-Man 3 became a clown car of tonally incompatible antagonists weighed down by disparate plot points. Indeed, in the brief amount of time devoted to his story, Venom hardly came across as the monstrous existential threat presented in the introductory comic story. The role also failed to reflect the more nuanced comic elements of the character’s personality that eventually led to a successful conversion into being an anti-hero. Moreover, even the aesthetic presentation of Grace joined with the symbiote as Venom was unimpressive and small. Yet, within the poetic parallels between Peter Parker and Eddie Brock was the nucleus of a potentially compelling storyline—one that could have come to fruition properly in the never-realized Spider-Man 4, instead of being sloppily rushed to a pumpkin-bomb-incinerated conclusion in this film.

Regardless, fans have plenty of Venom (as played by Tom Hardy,) set for the near future, with solo sequel Venom: Let There Be Carnage scheduled to hit theaters on Friday, Sept. 24. Less than three months later, Spider-Man: No Way Home will bring multiverse mischief when it hits theaters on Dec. 17, trailed by Marvel Studios’ presumed follow-up, Doctor Strange in the Multiverse of Madness on Mar. 15.