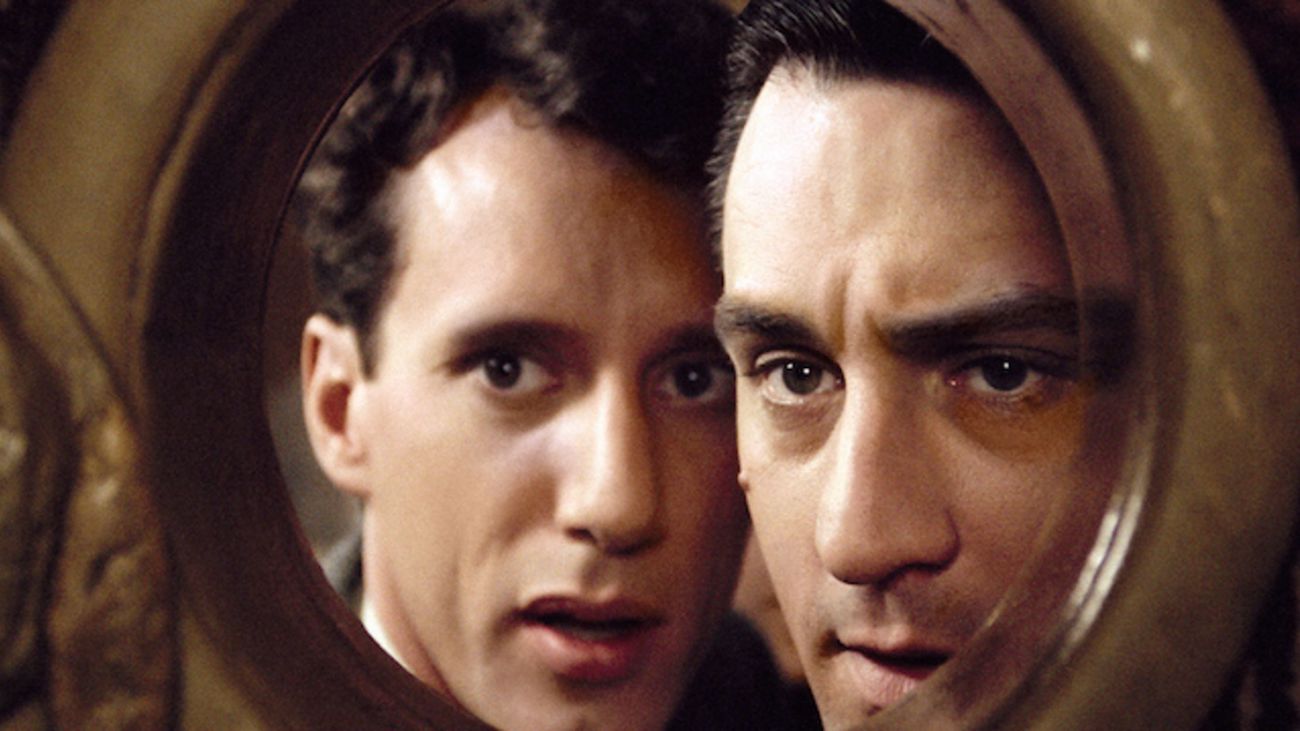 Sergio Leone’s Once Upon a Time in America is as epic as The Godfather, gorier than Goodfellas, and as streetwise as Mean Streets. It tells a full history, from childhood to old age, street hustles to political suicides, community toilets to opium dens. The version which is right now available on Netflix has been amazingly restored by Italy’s Bologna Cinematheque L’Immagine Ritrovata lab. I don’t think I have ever seen the film so clear, and it is a perennial to me, as is The Godfather.

It’s true, even the most devoted gangster fan and cinephile doesn’t watch Once Upon a Time in America as often as The Godfather, and it’s got Robert De Niro at his most gangta. For one thing, Leone’s film has never been as accessible. It is not shown regularly on any kind of broadcast channel, and even the film’s own producers thought it was too long for people to sit through. Pop culture history makes it sound like Once Upon a Time in America had a short version that ran 10 hours and a long version that ran a week.

How Long is Too Long for Once Upon a Time in America?

The truth is, Leone did have up to 10 hours of finished cinematic material, which he cut down to six hours. He wanted to put it out in two parts, much like the initial saga of The Godfather was extended into a sequel. Leone’s original vision for the film was two 180-minute motion pictures which would be shown on consecutive days. After the initial run, he planned to edit the two parts down for a general release which would run as one four-hour and 29-minute film.

Film distributors convinced Leone to release a “Director’s Cut” feature at a running time of 3 hours and 49-minutes, with no intermission, which was the version shown at the 1984 Cannes Film Festival (Martin Scorsese led the push to restore the original version, which was shown at Cannes in 2012, though it’s still missing 18 minutes). This version caught on in Europe. But American audiences saw an even more butchered cut in 1984. The U.S. financial backers, The Ladd Company, founded by actor Alan Ladd’s son, cut 90 minutes from the already-edited film, bringing it to two hours and 19 minutes. But they also restructured the film, cutting the flashbacks-within-flashbacks to present the story chronologically.

This most affects the opening, which is an extended action sequence told with the expressionism of a silent film and the nihilism of post-war Italian neorealism. It is a bit of a jumble coming out of an opium dream. Noodles is on the run, behind in the game, and stoned out of mind. The flashbacks create a cognitive dissonance, and the audience experiences the freefall in a visceral way. By the time they land, it’s in the beginning of a story, which may all be an opium dream. The longer version did play at art cinemas in the U.S. Having seen both on their initial release, this writer preferred the long version of the crime classic, but will admit, they could have answered a phone in the opening sequence before it rang 30 times.

I’d Watch an 8-Hour “Making of” Documentary on This

The production of the film is worthy of a star-studded documentary itself. Leone devoted most of his adult life to getting it done. He turned down The Godfather to make it. Once Upon a Time in America is the final entry in Leone’s “Once Upon a Time” trilogy. It followed Once Upon a Time in the West (C’era Una Volta Il West) (1968), and Once Upon a Time in the Revolution, which came out in 1971 as Duck, You Sucker!. One of the first America drafts was written by Norman Mailer, the author of the novel The Naked and the Dead, and Marilyn: A Biography, the 1973 Marilyn Monroe biography which first speculated the Hollywood icon had been killed by the FBI and CIA. Leone told American Film magazine the novelist was not “not a writer for movies,” but wasn’t satisfied with a screenplay until the end of 1974.

Leone first became interested in making Once Upon a Time in America while making Once Upon a Time in the West. He came across the book The Hoods, which is described on its cover flap as “a notorious mob boss of the syndicate tells the full inside story of hired killing and crime operations.” Published in August 1952, it was very open about Jewish gangster life during the 1920s and ‘30s. It was written by Hershel “Noodles” Goldberg under the alias Harry Grey.

Goldberg also wrote the 1958 book, Portrait of a Mobster, about Jewish mob legend Arthur “Dutch Schultz” Flegenheimer. He wrote The Hoods while serving time in Sing Sing prison. Leone met with Grey in a New York City bar, according to Christopher Frayling’s 2012 book, Sergio Leone: Something to Do with Death. The author was still in hiding from his former mob associates. The renowned Spaghetti Western director didn’t find a heroic figure like “Paul Muni in Scarface or James Cagney in The Public Enemy,” in the bar. Instead there was a poor man “with a machine gun in his hand and a Borsalino on his head.”

Leone began casting in 1975. When The Hoods begins, the leading characters are teenage criminals. Richard Dreyfuss was first cast as young Noodles. The older version of the character was to be played by James Cagney, who hadn’t made a film since Billy Wilder’s One, Two, Three in 1961. He wouldn’t make another until 1984, the year Leone’s film was finally released, when he appeared in Miloš Forman’s Ragtime. That film also stars Elizabeth McGovern, who plays adult Deborah in Once Upon a Time in America. French actor Gerard Depardieu was cast as young Max, and the part would pass to veteran actor Jean Gabin, an icon of French gangster films.

This is true dream casting. Dreyfuss made his mob movie bones playing Baby Face Nelson in Dillinger (1973) and would go on to become an acting institution. Cagney was an acting legend, who began his career creating young gangster icons. Judging from the outstanding acting performances Leone got from Hollywood Golden Age actors like Henry Fonda, it would have been a masterwork.

Leone brought out unsuspected feats of greatness from veteran actors who had been subject to the rules of mainstream cinema. It would also be wonderful just to watch Cagney and Gabin create onscreen dynamite together. Meanwhile Gabin is probably best known as the lead in Jean Renoir’s 1937 antiwar masterpiece, La Grande Illusion. But that was also the year he played “The Prince of Plunder” in director Julien Duvivier’s Pépé le Moko (1937). That gangster-in-hiding title role established him firmly in French crime cinema, and it should be seen by any fan of Casablanca or Algiers. He also starred in Jacques Becker’s mob film Touchez pas au grisbi (Don’t Touch the Loot) (1954), and plays the capo of the Manalese crime family in director Henri Verneuil’s The Sicilian Clan (1969).

I would gleefully binge 10 hours of Gabin and Cagney rehearsing.

And I Could Watch the Final Cast All Weekend

I’d also binge rehearsals for the cast that ultimately wound up filming Once Upon a Time in America. Robert De Niro, as grown-up David “Noodles” Aaronson, was in his prime. He was already gangster film royalty, having played in The Gang that Couldn’t Shoot Straight (1971), Martin Scorsese’s Mean Streets (1973), and as young Vito Corleone in The Godfather, Part II. His Jake La Motta took a career-killing dive for the mob in Raging Bull (1980). But while De Niro also proved he could play psychopaths like Travis Bickle in Taxi Driver (1976), that part was better filled by his co-star.

James Woods, who plays the adult Maximilian “Max” Bercovicz, created one of the most convincing sociopaths of crime cinema in The Onion Field (1979). He also brought one of the sleaziest characters in science fiction to David Cronenberg’s 1983 cult masterpiece, Videodrome. For gangster and crime film fans, De Niro and Woods together are like seeing Cagney work with Edward G. Robinson in Smart Money (1931), Humphrey Bogart in Angels with Dirty Faces (1938) and The Roaring Twenties (1939), or George Raft in Each Dawn I Die (1939).

While Joe Pesci’s crime boss Frankie Monaldi is so authentic in Once Upon a Time in America that it looks like he was picked out of a lineup, Burt Young’s performance as his brother Joe Monaldi is pure cinema verité. He almost makes you want to take a shower. The only relief comes from watching Treat Williams as a union leader who takes a bath.

Once Upon a Time in America also began production in 1980 but was scuttled by an Actor’s Strike. It would have seen Tom Berenger and Paul Newman playing the Noodles characters. For Max, Leone considered Dustin Hoffman, Jon Voight, Harvey Keitel, John Malkovich, and John Belushi. Brooke Shields was set to play young Deborah, which went on to be Jennifer Connelly’s film debut. She would go on to play in Labyrinth (1986) with David Bowie, as well as to an acclaimed career as an adult in movies like Requiem for a Dream (2000) and win an Academy Award for A Beautiful Mind (2001).

What’s in a Bad Reputation?

The Godfather is briskly paced, relatable, and every sequence is perfectly framed. Had Once Upon a Time in America been split into two parts, as the director intended, it may have become just as iconic. Coppola saves the Corleone family backstory for the second film, where it sits comfortably as it mirrors one rise with another.

In today’s environment, where binge-watching is the norm, Once Upon a Time in America should be reevaluated on that basis. People are more accustomed to long-long form entertainment, because they have readily available short-form at their fingertips on apps like TikTok.  Alejandro Jodorowsky wanted to make a 10-hour adaptation of the science fiction novel Dune. He got the same blowback as Leone.

“Myself, I make an enormous project of a film that will not be a normal film, 14, 16, maybe 19 hours,” Jodorowsky told Den of Geek while promoting his film Psychomagic. “Hollywood thought I was crazy. A picture [should be] one hour and half or two hours, no more. But now, with series television, you see eight chapters. The short pictures are dying, it’s not anymore necessary. We need to make a serious chapter, you know? Ten hours.”

Today, Jodorowsky’s Dune would be a Netflix miniseries–or at the very least two films, as enjoyed by director Denis Villeneuve. Once Upon a Time in America is far more watchable than its legend declares, and Leone was a filmmaker who should have been afforded his cut. “He was a real artist of industrial movies,” Jodorowsky told Den of Geek. “You need to be very intelligent to do that, and he did it. The picture, all of his pictures, I love these pictures.”