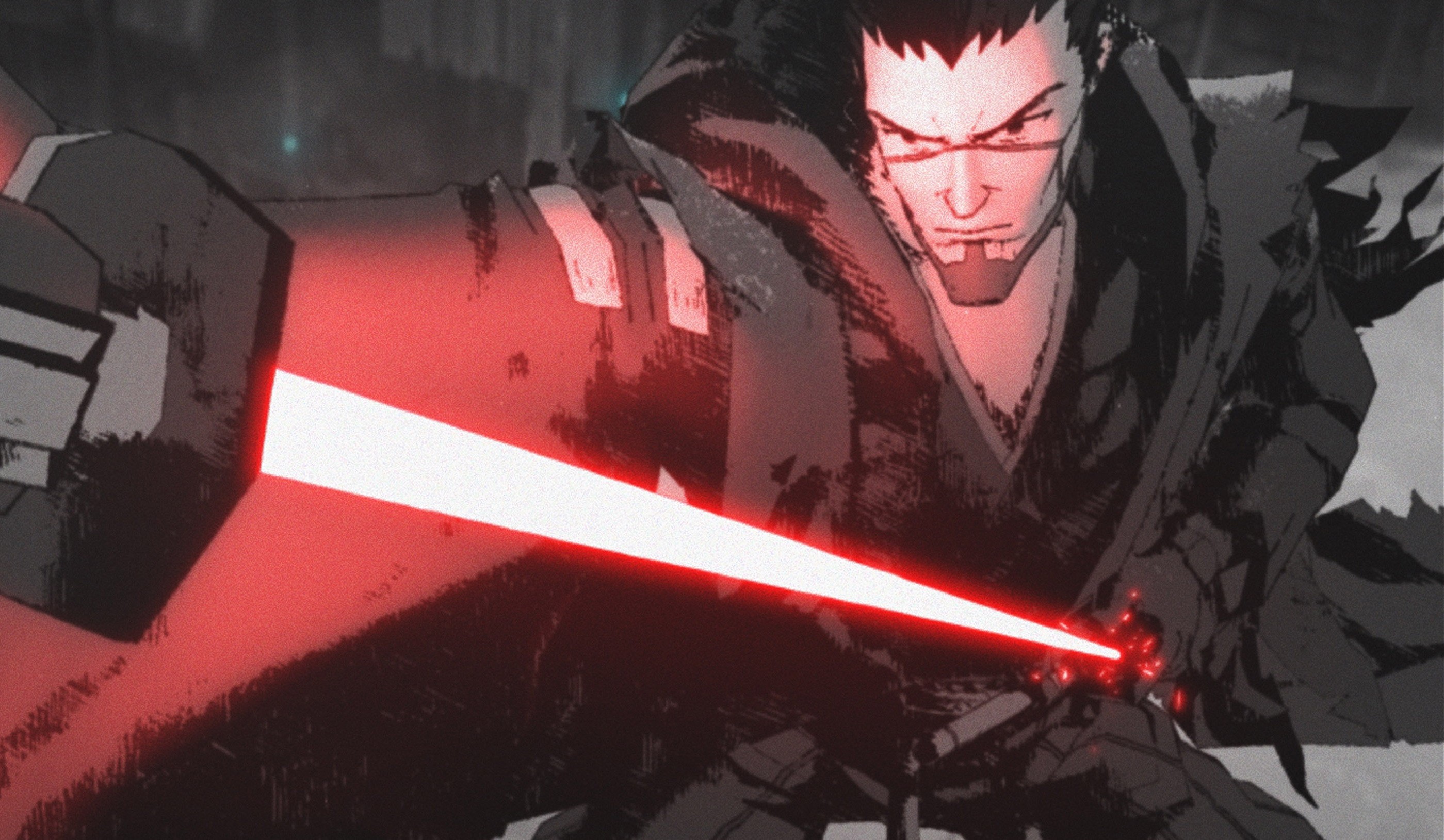 The first short film in Star Wars: Visions, “The Duel,” sets the anime collection’s unique, creative tone. Its main character, a wandering swordsman named Ronin, also challenges the idea of what it means to be a Sith. But just who is Ronin and what is the significance of his name?

Visions sits just to the side of Disney’s Star Wars canon. Given free range to create stories inspired by the beloved saga, the seven studios invited to make the nine anime shorts in the collection were able to reinterpret the story of Star Wars in their own ways. (This is also the case in the upcoming tie-in novel Star Wars: Ronin: A Visions Novel by Emma Mieko Candon, which comes out on Oct. 12.) In “The Duel,” the protagonist simply known as Ronin wields multiple red lightsabers like a Sith. So does his opponent. That’s weird — in canon, morality is usually color-coded with red for evil and other lightsaber colors denoting noble Jedi. But “The Duel” isn’t interested in assigning morality by color.

While the exact state of this alternate universe galaxy isn’t explained in the short, the main character’s moniker gives us a clue. In Japan, a ronin was a samurai without a master. Usually employed by daimyō, or feudal lords, samurai were upper class extensions of the will of the shōgunate, the military leaders appointed by the empire. When George Lucas took inspiration from them for the Jedi, he made the moral and political elements quite different. With a Western idea of good versus evil applied to the concepts of Jedi and Sith, it became more important to distinguish “good” samurai from “bad.” Thus the lightsaber colors, which become irrelevant in this story inspired more directly by historical Japan.

Another major influence on both Star Wars as a whole and “The Duel” in particular is Yojimbo, the classic Akira Kurosawa samurai film. In very early notes for what would become A New Hope, Lucas noted his main character was “Starkiller (Mifune) — a cross between Yojmbo and Seven Samurai,” as quoted in The Making of Star Wars by J.W. Rinzler.

Yojimbo also draws on plenty of tropes from Westerns and detective fiction: its nameless hero (or one with a clearly invented name) is often compared to the pulp detective hero from the 1929 novel Red Harvest. It was also directly inspired by the American crime drama The Glass Key, making “The Duel” just the latest in a series of cross-ocean inspirations between American and Japanese genre conventions. But the setting of “The Duel” is pure Japan, with the feudal-era village of a type most notably captured by Kurosawa.

While the hero of “The Duel” wields a wicked red lightsaber, he’s also kind, ready to fight on behalf of innocent villagers against the greedy bandits. From the novel, we know he’s a “former Sith,” but the episode leaves open exactly how “former” that might be.

Emma Mieko Candon discussed this with StarWars.com, saying, “’The Duel’ is very much in conversation with period dramas a la [Akira] Kurosawa … Jidaigeki [period dramas] love samurai as protagonists because they’re suspicious of samurai as a class, and our Ronin falls right into that trope. I had to ask how this man rejected (or was rejected by) his social role, and why he continues to cleave to it. Why does he still carry that tell-tale red blade? And why does he hunt his own?”

More about who Ronin is and how his version of the Star Wars universe works will be revealed in our coverage of the novel next month.

James Gunn’s Plan for DC Video Games Sounds Awfully Convoluted
Marvel Studios’ Ant-Man and The Wasp: Quantumania | Emerald City
DC Movies and TV Shows: Full DCU Schedule
Is This Succession Character Harboring a Painful Secret?
The Last of Us: Who Is Kathleen In the Games?