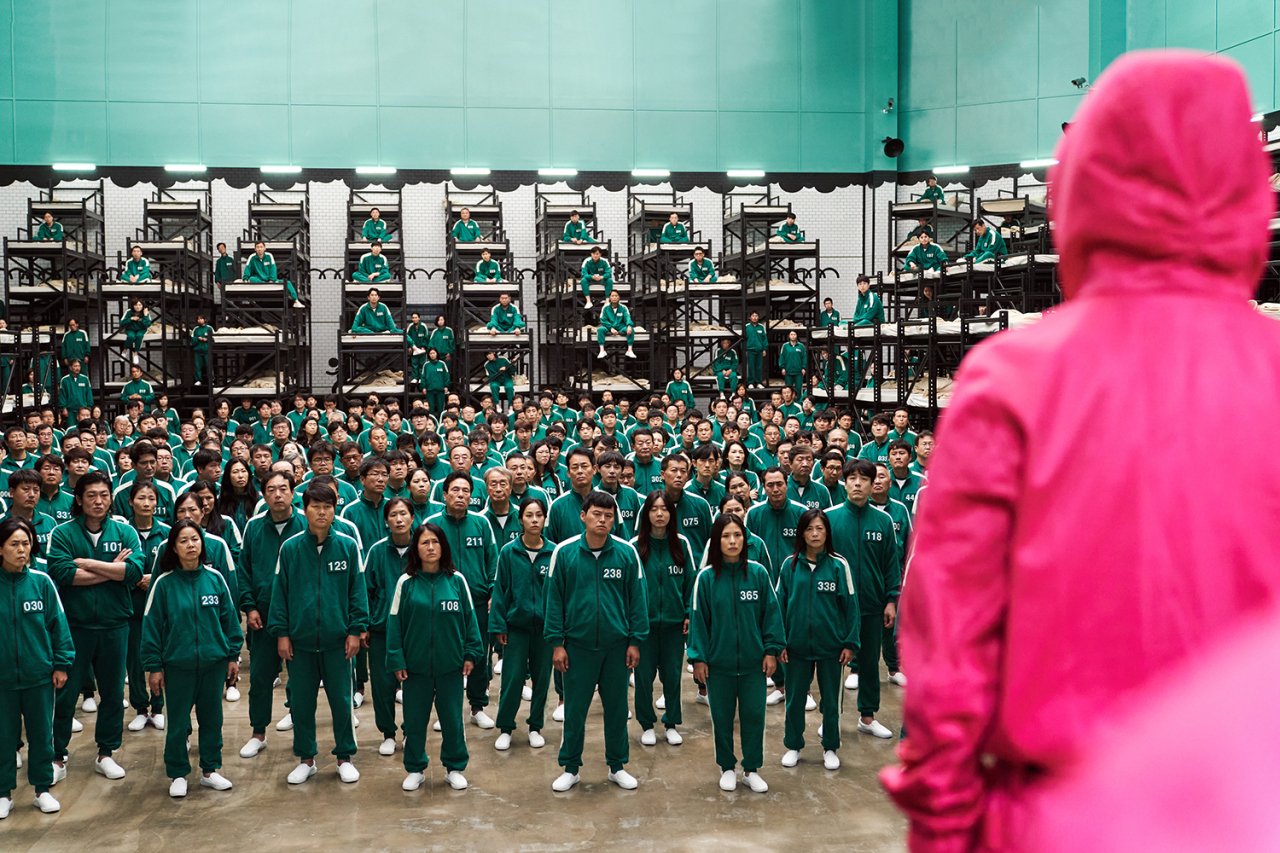 Chances are, if you’ve started watching Squid Game, then you’ve finished watching Squid Game. Netflix’s Korean social thriller is highly suspenseful, driving viewers through its nine episodes to its chilling conclusion with an anxiety-inducing urgency. The story of 456 desperate people who play a deadly game for the chance to win a ₩45.6billion ($39 million) prize, Squid Game is a familiar premise executed masterfully, which means that if you’re looking for more stories like Squid Game, then you’re in luck; the “deadly competition” trope is a very popular one. Like other standouts in the subgenre, there is nothing quite like Squid Game, but there’s still many, many TV shows and movies worth watching if you’re looking for something that delves into some of the same themes and scenarios as the addictive Netflix drama. Here are our recommendations…

Not technically a live-action adaptation of Hanna Barbera cartoon Wacky Races with a deadly twist – though that’s very much the vibe – this Roger Corman camp-fest is a cult favourite. The film stars Kung Fu’s David Carradine as the mysterious champion driver of the Transcontinental Road Race, an ultra-violent race across America designed as an outlet for the population’s simmering violence under a totalitarian regime – much like sports day at school, but with muscle cars instead of eggs and spoons. Health and safety guidelines are very much unobserved on the road, and the bodies soon pile up, as does a conspiracy that goes – you guessed it – all the way to the top! Brrm brrm. – LM

Two films, in two languages, from two different countries in two different decades, but both based on the same 1958 American short story. Robert Sheckley’s ‘The Prize of Peril’ is a prescient vision based on a television show where citizens volunteer to be hunted by trained assassins for the chance to win a life-changing sum of money. (Yes, there’s a chance that Stephen King, or at least his alter-ego Richard Bachman, read it before coming up with The Running Man). German film Das Millionenspiel was a TV movie that reportedly had viewers call in post-broadcast to volunteer to take part in the deadly televised contest, but perhaps that’s best taken with a pinch of salz. – LM

What’s more fun than a dystopian action movie based on a novel by Stephen King and starring Arnold Schwarzenegger in his 1980s prime? Nothing, that’s what. Arnie stars as a former police helicopter pilot named Ben Richards who is framed for a massacre he didn’t commit and forced to compete in a televised game show where prisoners are mercilessly hunted down by mercenaries. On top of that, the obstacle course is basically an even more fucked up version of Sasuke/Ninja Warrior. Fortunately, Arnie isn’t alone in his hatred of the totalitarian government that has doomed him to death just to entertain The People, and that’s how the revolution starts. Yes, it’s a campy movie with some very cheesy lines, but good for a few Friday night laughs. – JS

Battle Royale is one of the most beloved examples of the “deadly competition” genre, especially for nerds like Den of Geek staff and readers. Based on a 1999 novel by Kōshun Takami, Battle Royale made an impression for its brutality and stark social analysis when it burst onto the international nerd cinephile scene back in 2000. The story follows a busload of school children who are knocked out and wake up on an island. Each is given a random weapon—from guns to household items, like a paper fan or pot lid—and they must fight to the death until only one remains. – KB

The early 2000s were… what’s the term for a golden age of something terrible? A high-low point? The eye of the shitstorm? Either way, for the reality television genre, the early 2000s were it. The world dug its mucky snout into the honey pot of dehumanised abs, boobs and therapy bills waiting to happen, and decided it liked the taste. Some good though, did come out of it – satires like Danial Minahan’s 2001 feature debut Series 7: The Contenders. The film shows six American strangers picked by national lottery, armed with guns and forced to hunt each other down while the world watches in nightly instalments. It’s pacey, well-acted, darkly funny and carries your basic screaming ‘what have we become?’ message of many others on this list. – LM

OK, I’m cheating a bit with this one, which isn’t a series or movie, but rather a single TV show episode, but it’s Doctor Who, so I’ll allow it. It’s hard to remember more than 15 years later, but, when Who relaunched in 2005, head writer Russell T. Davies was reinventing the wheel, resulting in some conceptually ambitious installments. This definitely includes “Bad Wolf,” which has a pretty strange premise for the first half of the season-ending two-parter.

In the Davies-penned “Bad Wolf,” Rose, the Doctor, and Jack wake up to find themselves not only separated from one another, but in incarnations of various British TV competition shows like The Weakest Link, Big Brother, and What Not to Wear. Though these shows may seem similar to their 21st century counterparts, the stakes are not: the losers are killed. Honestly, this premise was a bit ahead of its time. Sure, this was five years after cult classic Battle Royale hit the scene, but three years before the first Hunger Games novel would hit shelves. The scenario is not only compelling and fresh, but Davies doesn’t linger too long before explaining how it is relevant to the season-ending mystery. – KB

A list of this kind would not be complete without The Hunger Games, one of the most popular and successful modern incarnations of the “deadly competition” trope. Like Battle Royale before it and Squid Game after it, The Hunger Games succeeds because it uses its violent premise to explore contemporary social anxieties. Suzanne Collins famously came up with the initial idea for The Hunger Games while flipping through the channels between competition reality shows and footage of the Iraq War. Given the massive success of both the novels and movie adaptations, it’s obvious that this story is tapping into some serious and unaddressed collective social trauma. The Hunger Games gave young people especially a chance for temporary catharsis through the guilt, fear, and pain that came with growing up post-9/11. – KB

The thing about deadly competition stories is that most, if not all, of them are particularly class conscious. When one thinks of the type of person who would choose to participate in, or be forced into, a life and death game, it’s not usually rich people. Deadly competition stories are often about the exploitation of the poor. Perhaps no other entry into the genre understands that as deeply as Brazilian series 3%. This tale takes place in a dystopian near future in which the impoverished residents of the “Inland” can compete in a mysterious event known as “The Process” and potentially be granted access to the upper ranks of society. The Process is rigorous, with many of its participants eliminated and some even killed. How many actually make it? Well, check the title of the show again. – AB

There’s a reason why Alice in Borderland started trending as soon as Squid Game binges began: the 2020 Japanese science fiction show based on a manga of the same name, has a lot in common with its Netflix cousin—at least on the surface. Directed by Shinsuke Sato (who also helmed Gantz, another great “deadly competition” story example), Alice in the Borderland begins when three friends are abruptly and unexpectedly pulled into a parallel Tokyo where they must compete in a series of deadly games. The difficulty of each game corresponds to a playing card and, if they lose or refuse to play one of the competitions, they will be killed by lasers from the sky, naturally.

While Alice in the Borderland’s initial premise has some things in common with Squid Game—notably, the shock of its characters upon realizing the deadly stakes of the artificial competition—the respective shows are not only grounded in different cultures (Japanese va. Korean), they also hail from different genres. While Squid Game is very much set in our own world, Alice in the Borderland is much more science fiction in tone and execution. (I mentioned the sky lasers, right?) Both are good shows, but their comparisons quickly fade once you look past the surface. – KB

The concept for High-Rise Invasion is as enigmatic and compelling as any anime can be. The anime (or original net animation as this is sometimes dubbed) picks up with our hero Yuri Honjō suddenly on top of a skyscraper with no memory of how she got there. Yuri soon discovers that she’s stuck in a world made up of entirely high-rise buildings and the bridges that connect them. What’s worse is that these high-rises are patrolled armed individuals wearing masks who seem hellbent on killing everyone who isn’t masked. High-Rise Invasion is slightly atypical from your usual “death competition” genre in that it’s not clear if this is even a competition. At the end of the day, however, the goals remain the same: survive at all costs. Until things get a little more complicated of course… – AB

What are your favorite examples of the deadly competition trope? Let us know in the comments below…