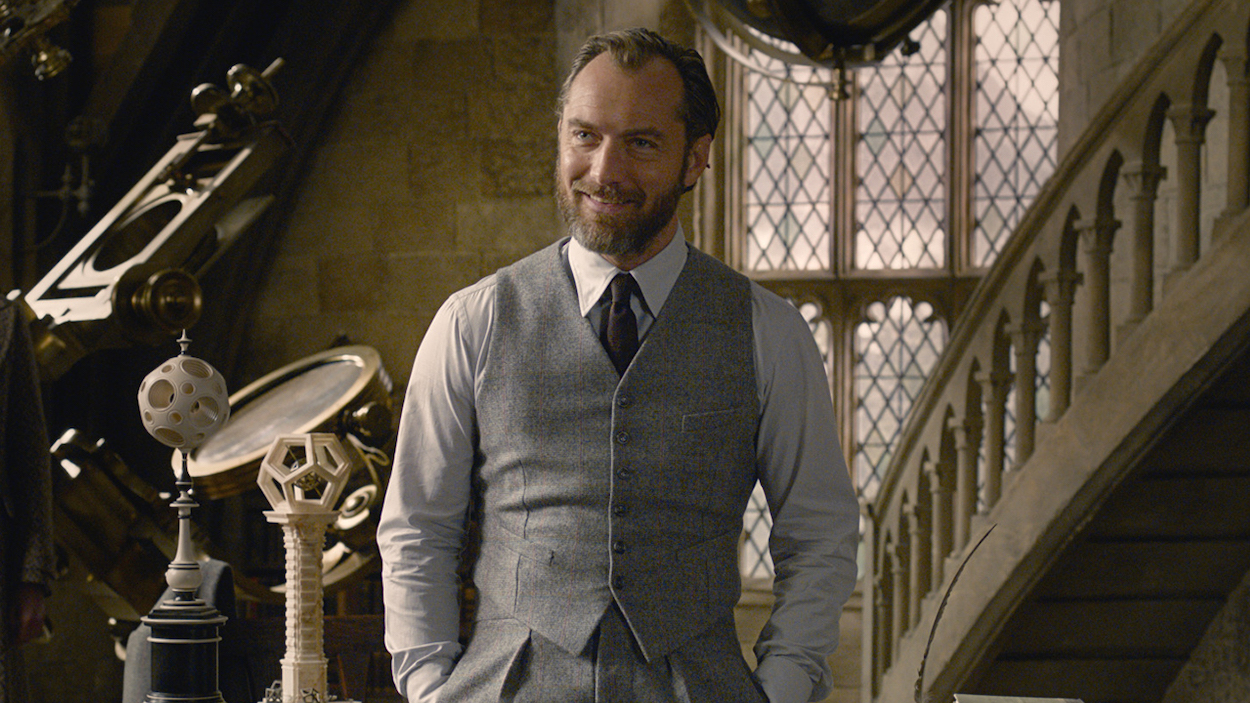 The sunk cost fallacy is a powerful thing. Despite the fact that the current pandemic has audiences more desperate than ever for tentpole films, no one has exactly been clamoring for the continuation of the Fantastic Beasts series, slated to have five movies in total. So it was with muted fanfare that Warner Bros. announced the upcoming release of the third Fantastic Beasts film, set to premiere in April 2022 under the title Fantastic Beasts: The Secrets of Dumbledore. Those who watched The Crimes of Grindelwald will remember the prominent role of a young Dumbledore played by Jude Law—clearly the series isn’t quite finished exploring the famously eccentric wizard’s backstory. But given J.K. Rowling’s history of not knowing when to stop opening up the vault, unloading new factoids that simultaneously demystify the wizarding universe and cast its characters in a poor light, you have to wonder: Might everyone be better off if the secrets of Dumbledore were left untold?

The Fantastic Beasts series has never exactly set the world aflame with its brilliance. The initial film, Fantastic Beasts and Where to Find Them, approached the success of the original Harry Potter film series, earning $814 million on a $200 million budget. (Notably, it was the eighth highest grossing film in 2016, when each of the other Harry Potter films were in the top three highest grossing for their respective years.)

The final bait-and-switch reveal of Johnny Depp as the notorious Hitler-esque villain of the series did little to whet the appetites of moviegoers, and the second film fared considerably worse at the box office. The Crimes of Grindelwald made $150 million less than its predecessor, the worst showing of any Harry Potter film by far.

It was roundly criticized for its less than inspired plot and borderline offensive imagery surrounding some of the non-white characters. More than anything, audiences were turned off by the perceived pointlessness of the series: this was not an expansion of the Harry Potter universe that anyone was really asking for. And yet, the franchise soldiers on, kept alive more out of sheer bloody-mindedness than anything else. At this point, surely the kindest thing to do would be to put the poor dear out of its misery, releasing Eddie Redmayne from the shackles of a multi-million dollar contract and letting him go back to making inspirational period dramas. But as long as Rowling has life left in her body, she’s committed to tearing down her own legacy. So here we are: The Secrets of Dumbledore.

It’s no, well, secret that name-dropping Dumbledore in the title is a Hail Mary borne out of the desperate hope that evoking one of the most popular characters in the series will drive audiences back to the theaters. But realistically, it seems like Dumbledore’s backstory (and any hidden revelations contained within) has already been fairly well-mined. We’ve seen him as an old man, the wizened mentor of Harry Potter as headmaster of Hogwarts. We’ve seen him in flashbacks at various points in what we have to assume is an unusually extended middle age, thanks to Harry’s exploration of the Pensieve in an effort to learn more about Voldemort’s shadowy past. We’ve gotten first hand accounts of his early life from his brother Aberforth, and we’ve even read excerpts from an (admittedly potentially libelous) biography published posthumously by Bathilda Bagshot.

And now with The Crimes of Grindelwald, we’ve seen him as a roguishly handsome young Transfiguration professor at Hogwarts in the 1920s, thanks to Law in an impeccably tailored three-piece suit. Does Dumbledore even have any secrets left?

Setting aside all of the substantial on-screen exploration of Dumbledore’s past, we haven’t even begun to take into account one of the most powerful vessels of canonical Harry Potter intel: the famous Rowling info dump. Ever since Harry Potter put J.K. Rowling on the map, it’s been clear that she has veritable notebooks full of background information that didn’t make it into the books and films, and nothing delights her more than sharing some of these details. Some of them are puzzling but harmless, like the time she posted on Pottermore (apropos of nothing) that Hogwarts didn’t used to have indoor plumbing, and that witches and wizards simply relieved themselves wherever they stood and magically vanished the evidence.

Others add nuance to beloved characters: the revelation she shared shortly after the release of the final Harry Potter book, for example, which told us Dumbledore was gay. Learning all of this shapes our understanding of the series, but it also feels a little bit like a cheat. If it was important to Rowling that we know Dumbledore’s sexuality, why did she wait until after the ink was dry to tell us, and not simply include it in the text? In many ways, it’s a half measure; an opportunity to pay lip service to progressive values but without any inherent risk. (And the more that we learn about Rowling’s views on gender politics, the more it comes across as disingenuous.)

To be frank, audiences have reason to distrust Rowling’s attempts to elaborate on characters from the original series. Historically, this has not always improved said characters. Nagini, for instance, began as an intriguingly intelligent snake, one able to maintain a powerful bond to Voldemort when he was unable to connect with any of his own species in the same way. Everyone just sort of accepted that character as read, and no one asked for more of an explanation. The universe did not need a Nagini prequel.

But in The Crimes of Grindelwald, Rowling couldn’t resist the opportunity to tinker, and then we end up with a Nagini that is an incredibly problematic depiction of an Asian woman. She is enslaved by a circus owner and burdened with a blood curse that initially gave her the power to transform into a snake but, by the events of the original Harry Potter series, she is permanently fixed in snake form. Who in the world thought adding that to Nagini would make her a more compelling character? Proof that there is creative danger in becoming so rich and powerful as an artist that no one is willing to tell you, “No. That’s a bad idea.”

So while there are diehard fans out there, presumably thrilled by the news that the Fantastic Beasts franchise lives another day, there is a notable sense of dwindling enthusiasm amongst audiences at large. The Secrets of Dumbledore does little to inspire hope that this installment will prove itself worthy of existence, feeling more akin to a cynical attempt to capitalize on his popularity. Instead of making fans excited to learn more about the enigmatic Albus Dumbledore, it can’t help but evoke a feeling of dread. People still like Dumbledore, even with his questionable beliefs and actions in his early life, but what will happen when Rowling takes another swing at him?

No matter how much she intends to add to the character, there’s the very real risk she’ll take something away. Indeed, it seems obvious to everyone but the production team that she’s long since reached the point where the best thing for her own legacy would be for Rowling to put down the pen and walk away. Stop it before she does irreparable damage to the characters that a generation of children grew up with.

Arrow Season 6 Episode 16 Review & Reaction | AfterBuzz TV
Why One of Star Trek: The Next Generation’s Worst Episodes Is Still Worth Watching
Other Space | Comedy Sci-Fi Series | Coming Soon to DUST on TV
Comic To Screen | The Sandman | DC | #Shorts
The Last of Us: Can Ellie Infect Others?