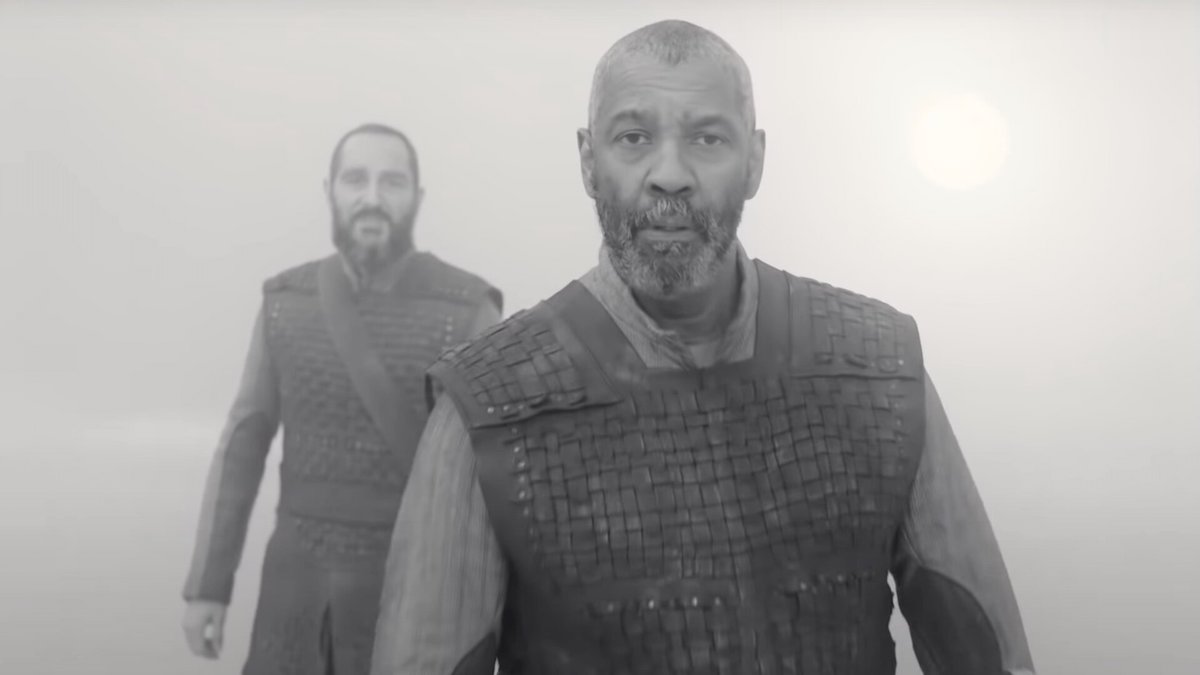 William Shakespeare’s Macbeth has proven to be one of the Bard’s most elusive tragedies for filmmakers. Despite being among his best known plays and full of visceral imagery like witches and war, murders and revenge, this allegedly cursed title has appeared genuinely damned on-screen. It thwarted masters like Roman Polanski and defeated would-be revisionists, such as Justin Kurzel only six years ago. But with Joel Coen’s The Tragedy of Macbeth, a haunting and meditative work from one-half of the Coen Brothers, the Scottish play finally gets its due. How much more marvelous then that it does so with two astonishing performances from Americans: Denzel Washington and Frances McDormand.

Shrouded in stark blacks and whites, shadows and deceiving halos of light, there is a chilling unnaturalness to The Tragedy of Macbeth, which runs counter to most Shakespearean cinematic adaptations. Rather than reach for the naturalistic sweep of epic filmmakers like David Lean or Franco Zeffierelli—as has been the popular method of translating Shakespeare to screen since Kenneth Branagh’s run in the ‘80s and ‘90s, not to mention Zefferelli’s own contributions—Coen favors a claustrophobic and oppressive color palette. His and cinematographer Bruno Delbonnel’s compositions echo F.W. Murnau, Carl Dreyer, and other German Expressionists, matching the artifice of the stage with cinema at its most beautifully artificial. The director even shoots in the classic Academy aspect ratio of 4:3 and in literal black and white.

The result is a movie that prefers to quietly brood instead of scream—and to execute its heavy deeds in the dead of night rather than on battlefields. They’re unorthodox choices, but like the lead performances, they prove to be convincing ones.

When The Tragedy of Macbeth begins, those main characters appear strikingly different from how we’re accustomed. Aged and at a point in life where their future prospects should seem dimmed, Washington and McDormand’s Macbeths embody a wiser and more calculating personification of ambition. We meet Washington’s Macbeth on the outskirts of a medieval field where he’s already stewing. Elsewhere and closer to the seat of power, old King Duncan (Brendan Gleeson) has signaled that he will bestow his greatest glories on the presumed heir to his throne, Malcolm (Harry Melling). Bitter and left behind, Lord Macbeth (Washington) looks adrift in the wilderness when he comes across three Weird Sisters, played all by Kathryn Hunter. Emerging from the mist like three Grim Reapers who’re intent on playing a game of chess, the witches promise Macbeth the crown if he’ll do just one thing… kill his king.

Washington’s Macbeth doesn’t take much pushing from either the witches or his equally Machiavellian wife, Lady Macbeth (McDormand). And on the following night, Macbeth steals into the king’s bedchamber as he slumbers. There’s no hesitation to Washington’s iteration. He even pauses to take a quiet moment of satisfaction when Duncan awakens, realizing what is about to occur. The treason is coolly executed.  Even so, loose ends soon multiply as Malcolm flees and the barely crowned Macbeth must fend off suspicions of tyranny, including by the ever watchful Macduff (Corey Hawkins).

At the New York Film Festival press screening for The Tragedy of Macbeth, McDormand revealed she and Coen, who she produced the film with, only ever considered Washington for the title character because “you don’t make lists for a generation’s Macbeth. One’s born and then he plays it.” Having seen the finished film, her argument is persuasive. Older and grayer than your typical Scottish usurper, the formidable stage and film actor eschews a Macbeth who rants in favor of one with the cynical patience of old age. There is a ruthless efficiency to his every gesture and pause, at least in the character’s early scenes before the crown wears heavy.

As an actor who’s done Shakespeare before on stage and screen, the latter of which in what I’d argue is still the most enjoyable Bard film, Much Ado About Nothing (1993), Washington commands complete authority over the film’s brisk 105 minutes. Thus when things inevitably go to seed, it gives the actor that much more to chew as he lets a tyrant’s hair down.

McDormand is similarly excellent as the Lady of the House who discovers her eyes are bigger than her stomach. Like her on-screen husband, McDormand makes no effort to hide her American accent, nor does she feel the need to commit either entirely to the rhythm of iambic pentameter dialogue or the more naturalistic readings that modern screen versions of Shakespeare employ. She comfortably alternates between the two, switching to whichever the very scene, or specific inflection, demands.

In Coen’s hands, both characters are unmistakably tragic, if rarely sympathetic. There has been much speculation in the press about Joel Coen helming this picture on his own and without his brother Ethan for the first time in both men’s careers. While I cannot speak as to why Joel flew solo on this production, The Tragedy of Macbeth only sparingly features any of the hallmarks associated with traditional “Coen Brothers” fare. Select scraps of verse, and passing character beats, reveal an occasional sense of gallows humor. But by and large, the film is as ruminative and apocalyptic as its title would suggest. There is no humor or irony to the flashes of brutal violence here. Similarly, the fates of side characters are mournfully lingered upon.

Given the film’s A24 pedigree, it’s likely some younger viewers will be drawn toward comparing the movie to the indie distributor’s recent efforts. However, with Coen balancing between long deep focus compositions and extreme closeups of his actors at their most pained, The Tragedy of Macbeth is clearly drawing from older traditions. I was particularly taken with how the three witches’ presence is hinted at even when they’re off-screen, with vultures drifting across fields and Dunsinane Castle like vampire bats.

In direct contrast to even the most recent Macbeth movie starring Michael Fassbender and Marion Cotillard, Coen and his troupe look inward. They preserve much of the original text, and ultimately reveal that in a visual medium, Macbeth has been a horror movie all along. And like certain damned spots, once you see that, it’s impossible to forget.

The Last of Us: Who Is Kathleen In the Games?
How to Find a PS5 and Xbox Series X In 2023
Happy Valley Series 4 Won’t Happen, and That’s Perfect
Why Dragon Quest Has Always Been So Much More Popular In Japan
Hogwarts Legacy Controversy Explained: Why Are People Boycotting the Game?