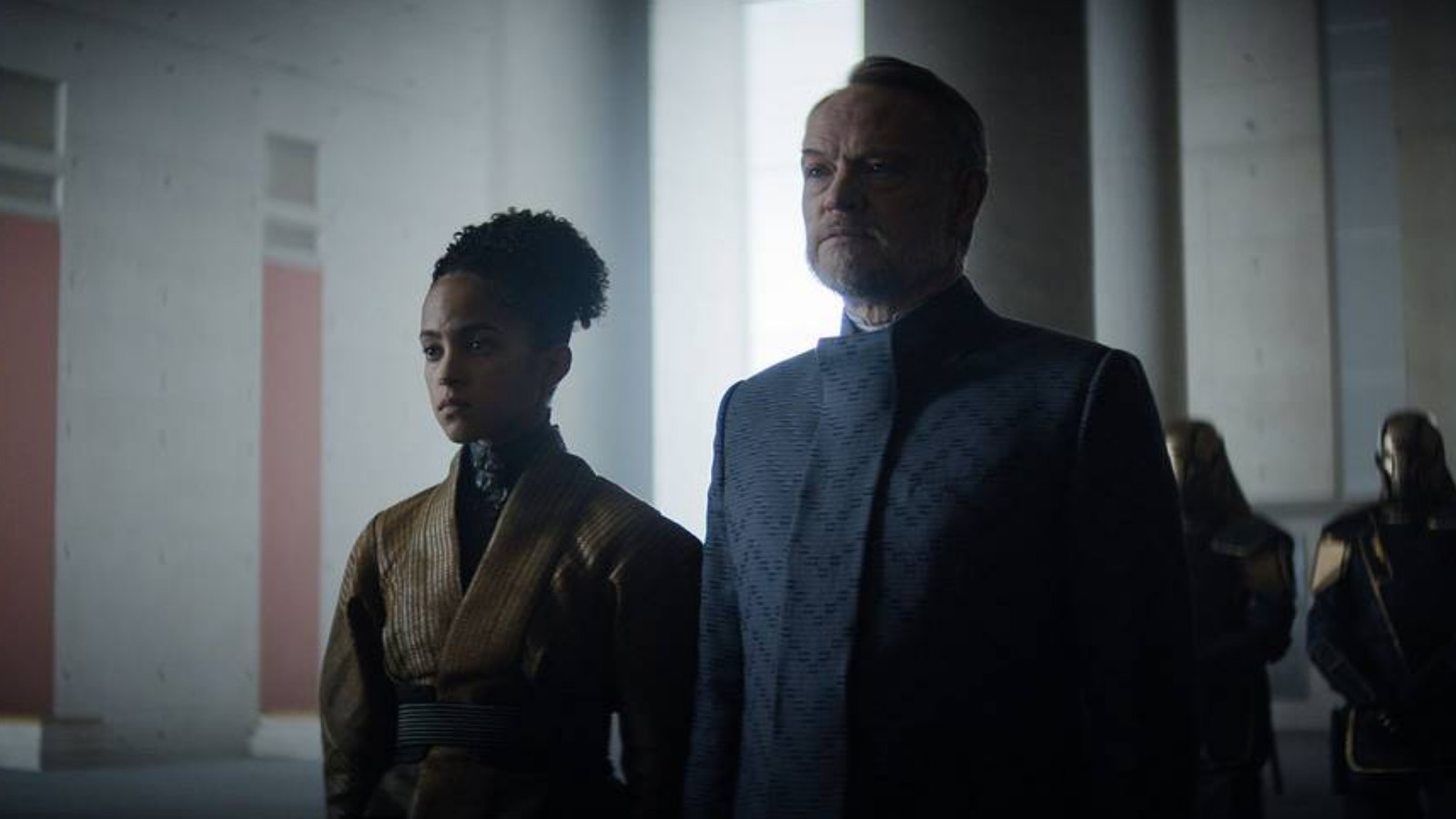 This article contains no spoilers for Foundation.

We live in an era when classic works of literature that were once thought to be “unfilmable” — particularly in the realms of sci-fi and fantasy — are now actually coming to the screen. Chief among those, and certainly a crown jewel in the annals of science fiction, is Foundation, an epic series of stories and novels by legendary writer Isaac Asimov that spans thousands of years of future galactic history.

Premiering on Apple TV+ with a 10-episode first season, Foundation begins with the story of Hari Seldon (played by Jared Harris), a mathematician who develops a science called psychohistory, with which he can predict large-scale patterns in history and human behavior. Not surprisingly, Seldon’s prediction that the vast Galactic Empire will collapse into a 30,000-year period of barbarism doesn’t sit well with the Cleons, clones of the original emperor, Cleon 1, who have ruled the galaxy for more than 400 years.

Seldon’s plan is to establish the Foundation, a repository of knowledge that can help cut the coming dark ages down to 1,000 years. The Cleons allow him to proceed, but banish him and his followers to a distant planet called Terminus where they will set up the Foundation. Key to Seldon’s plan are a brilliant young woman named Gaal Dornick (Lou Llobel), his adopted son Raych (Alfred Enoch) and, years later, Salvor Hardin (Leah Harvey), the warden and protector of the colony on Terminus.

Series creator/showrunner David S. Goyer — known to fans for writing the original Blade trilogy, co-writing the screenplays or stories for the Dark Knight trilogy and Man of Steel, creating Da Vinci’s Demons for TV and much more — tells Den of Geek that he had been approached in the past about adapting Foundation as a feature film, but finally jumped at the opportunity to develop it in the present era of long-form streaming. But that doesn’t mean Foundation wasn’t difficult to adapt anyway.

“The original novel or series of short stories was written in the late ‘40s, early ‘50s,” he says. “So the key was identifying the core themes and figuring out, okay, that was what Asimov was writing about in a post-World War II environment. What’s the world like today and how can we apply what’s happening today to the metaphors of Foundation now?”

Other roadblocks to adapting Foundation in the past (which has defeated filmmakers such as Roland Emmerich and Jonathan Nolan, who were developing it for Columbia Pictures and HBO respectively at different points) were the vast leaps in time that the books make as well as their generally cerebral, complex nature. But Goyer had other concerns.

“I thought the harder aspect was making it emotional,” he explains. “The books aren’t known, per se, for being emotional, but with television, people tune in for emotion and characters. So I had to figure out ways of taking Asimov’s themes and embodying them into characters that could express those themes, through love, through their relationships with their parents and children, and so forth.”

One solution to that — and to updating Foundation for audiences in the 21st century — was to make alterations to a number of the major characters, like Salvor, Gaal and the Cleons’ android right hand person Eto Demerzel (Laura Birn), almost all of whom are male in Asimov’s books. But Goyer says he first wanted to make sure his proposed changes met with the approval of the late Asimov’s daughter Robyn and the Asimov literary estate.

“The first question that I posed to the Asimov estate was, given that this was written in a post-World War II environment, where there were virtually no speaking female characters in the first book, where very few members of the science fiction community or readers were women, was, ‘We’re going to be doing this for an audience of today and I want the characters in the show to reflect our audience. How do you feel about gender swapping some of the characters?’” he recalls. “Robyn Asimov and the estate completely embraced it. They said that Asimov himself would have embraced that and they were absolutely comfortable with that.”

Goyer also made other, extensive changes to the narrative, such as creating the Cleons (who are played at various ages by Lee Pace, Terrence Mann and Cassian Bilton) and developing storylines that would add the kind of action, intrigue and space opera necessary to keep audiences involved for 10 hours. Goyer says that every step of the way the Asimov estate was on board.

“Look, I grew up on these books, I revered the books,” says Goyer, whose introduction to Foundation and sci-fi came at a young age through his estranged father. “Like a lot of people, Asimov meant a lot to me. A lot of people have a very personal relationship to the original Foundation trilogy — it’s kind of this hallowed piece of work. It was important to me that Robyn and the estate felt like we were doing Asimov’s work justice and that we understood what the themes were about.”

He adds that the estate and Robyn Asimov were “very happy” after reading the first two scripts and seeing the first two episodes: “We felt that we had embraced everything that was important about Foundation and changed the things that, they felt as well, had to be updated for the time.”

The irony of this, even some 60 years after the first Foundation novel was published, is that Goyer sees the overall story, subject matter and themes as more relevant and prescient than ever.

“I started on this project three years ago,” he says. “Certainly climate change was something that people were talking about, but it hadn’t reached this critical juncture where we’re at now. We weren’t involved in a global pandemic and we weren’t involved in this crazy factionalism and this rise of nationalism that we’re seeing.”

Goyer says that it took him several readings over the years for the books to finally grab hold of him, and that he also passed on adapting it for the big screen twice before. So what made this the right time? “Now that I’m a father, I find myself thinking a lot more about what the world of tomorrow will be like, what the legacy that we leave our children and grandchildren will be,” he responds.

“That’s a lot more important to me now than it was before I was a father,” Goyer continues. “A lot of those themes carry through in the books, but also in our show. It’s kind of about, what are you willing to sacrifice now, so that future generations, our children and grandchildren, will be able to live in a world that’s as amazing as the world we live today? What is today willing to give up for tomorrow?”