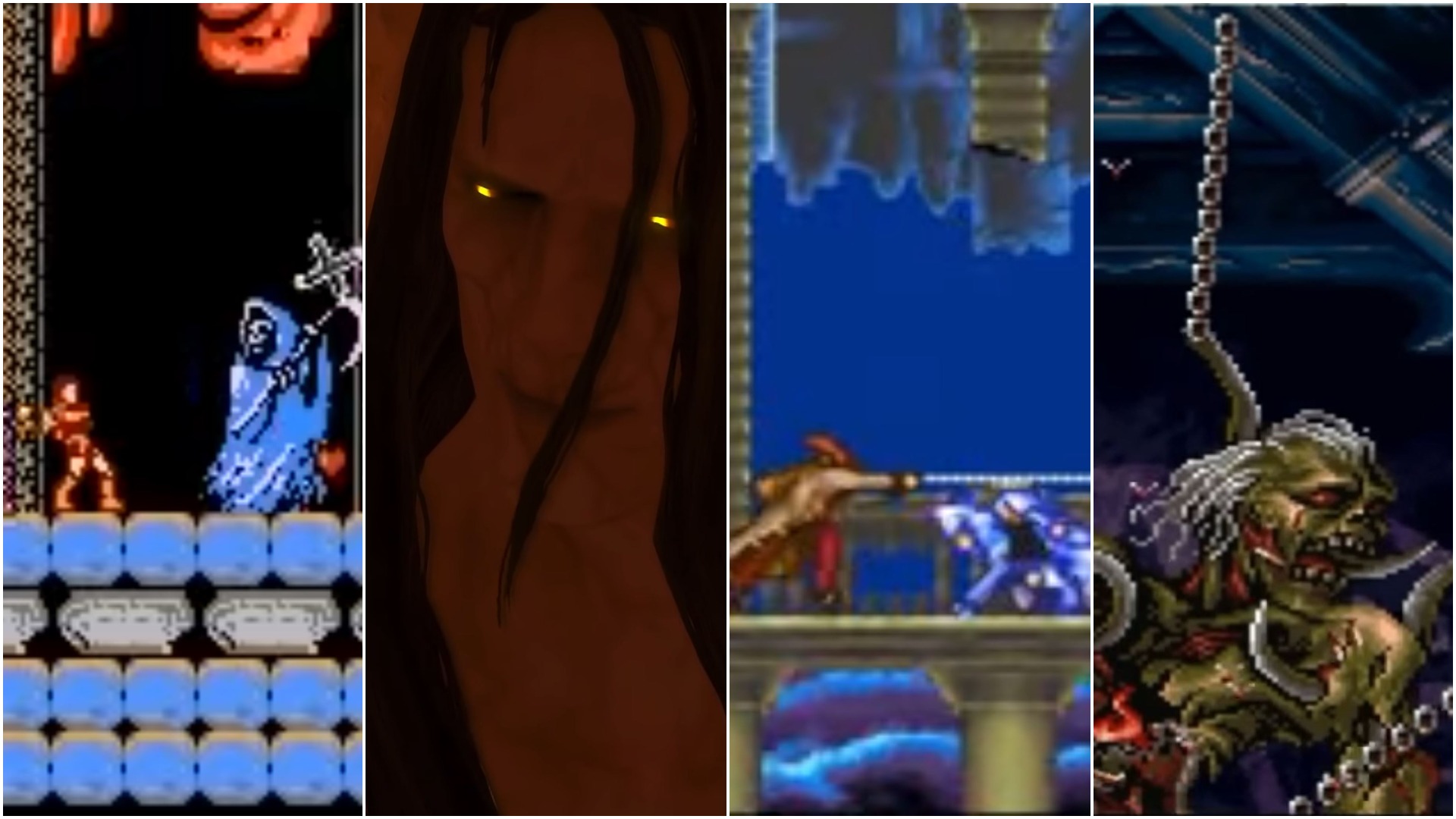 Few series have been more resilient than Castlevania. The first few games in the franchise were fairly standard 8-bit platformers (albeit with a unique horror vibe), but over time, entries in this series became less linear and more about exploration, eventually helping to inspire a whole new subgenre: “Metroidvania.” While the 3D Castlevania games never quite reached the same heights as those earlier titles, they’re still excellent (maybe even underrated) experiences in their own right.

Regardless of your favorite Castlevania, I think we can all agree that the series has given us some of the coolest enemies around. From new takes on horror icons like Dracula and Frankenstein’s monster, to more original creations like skull towers and flea men, the Castlevania series is filled with monsters and bosses that brilliantly pay homage to this series’ genre roots while establishing a legacy of their own even if they already enjoy one elsewhere.

In honor of the 35th anniversary of the first Castlevania game, here is our look are the absolute best monsters and bosses to come out of this classic series.

Essentially Castlevania’s equivalent of Super Mario’s goombas, zombies are the very first enemy you meet in the original game. While they don’t pose much threat on their own, but can get incredibly annoying if they manage to gang up on you from all sides.

Zombies have become a series mainstay (they appearing in some form in almost every Castlevania), but their first appearance is arguably still the best. These zombies are just rotting corpses in tattered cloaks with the singular purpose of doing as much damage as possible, and it’s easy to love them for their memorable simplicity.

The N64 version of Castlevania remains divisive due to a questionable camera and controls, but there’s no denying that the opening moments are among the most memorable in the series. As either Carrie or Reinhardt approach Dracula’s castle, they approach a large gate and are immediately confronted by a towering skeleton wielding a bone as a club.

Taking place just a few minutes into the game, this is ultimately an easy boss fight that sets the tone for a much more cinematic Castlevania experience than the 2D games that came before. Though giant skeletons have popped up in other Castlevania games, none of those encounters have been nearly as memorable.

Medusa heads have been a constant annoyance for the Belmonts since the very first Castlevania game, but the series’ spin on the mythical monster doesn’t really take center stage until she appears as a full-on boss in the criminally underrated Lament of Innocence.

Admittedly, this Medusa doesn’t put up much of a fight, but the giant, floating head makes for an especially cool looking battle, especially once the snakes on her head continually lash out and she starts flinging stones at Leon.

Bone pillars are another example of how Castlevania games can make simple ideas really cool. Basically just two dinosaur skulls on top of each other that shoot fireballs in opposite directions, bone pillars have evolved with the series over the years, expanding their repertoire of attacks to include giant spike balls and even laser beams.

The pillars rarely prove to be much of a challenge for any Castlevania protagonist, but they’ve become so iconic that it’s hard to imagine a game without them.

The first few Castlevania games were heavily inspired by classic horror movies, but as the series evolved, Konami dived deeper into folklore from all over the world to find some obscure, yet awesome, legendary creatures. The legend of the cockatrice (a chicken egg hatched by a toad) sounds ridiculous at first, but a couple of encounters make it clear that this giant chicken creature is no joke. The cockatrice’s ability to turn Soma Cruz into a stone statue gets annoying fast.

While the cockatrice makes for a fearsome enemy in Aria of Sorrow, it’s an even better ally in Circle of the Moon where you can summon the beast to pummel enemies with boulders.

Aria of Sorrow took a lot of risks with the Castlevania formula by moving the setting to the future (which also meant incorporating modern weapons like handguns) and forgoing the traditional Belmont protagonist for a leading man who may turn out to be the new incarnation of Dracula. It all results in one of the best and most innovative games in the series.

Among one of Aria of Sorrow’s cooler surprises is a boss fight with 21st-century vampire hunter Julius Belmont. Julius’ attacks are exactly what you would expect from a Belmont. He largely focuses on using whip attacks from his trusty Vampire Killer weapon but mixes things up with sub-weapons like axes and holy water. It’s a fun treat for fans to finally see how they’d fare against a legendary vampire hunter after playing as the Belmonts for so long.

When Dracula is usually the main antagonist of the Castlevania series, how do you dream up an even bigger threat for him to face in a game where it turns out that you’ve been playing as Dracula all along? As Dana Carvey’s Church Lady character used to as on SNL, “Could it be Satan?”

The final battle of Lords of Shadow is an epic and challenging one-on-one against the Lord of Lies in a fittingly hellish arena that leads into one of the better recent twists in gaming history. That alone makes it the best 3D Castlevania game to date.

Dracula’s number two has been a constant source of frustration for Castlevania players. Seriously, the boss fight against him in the first title might be the most difficult in the entire game, and he’s only slightly easier in many subsequent titles. But hey, it’s death incarnate, so what do you expect?

Death’s appearance has changed little over the years. He’s mostly been portrayed as a scythe-wielding skeleton in a cloak, but he’s also always been a fearsome foe who has even displayed an odd bit of respect toward the Belmonts. That quality alone makes him one of the more unique recurring foes in the mythos.

7. Merman- Castlevania: Symphony of the Night

Mermen don’t make a ton of sense, even in the fantastical world of Castlevania. Why does Dracula always have such a massive sewer in his castle? Could mermen even really live anywhere else? They seem pretty content to only hang out down there, which seems kind of weird, even by Castlevania’s standards.

Anyway, the mermen haven’t changed all that much since their first appearance in the original Castlevania. Since they’re heavily inspired by the iconic design of The Creature From the Black Lagoon, there also hasn’t been much reason to fix what isn’t broken. They remain an iconic enemy in the franchise, mostly known for posing a little more threat than the typical zombie while adding a little bit of variety to the castle setting and probably not smelling that great.

For the record, Gaibon is the gargoyle and Slogra is the thing that looks like a pterodactyl’s skin stretched over a human skeleton. They first appeared in Super Castlevania IV as endgame bosses Simon Belmont fought separately, but they teamed up in Symphony of the Night as Alucard’s first real challenge inside Dracula’s castle.

The designs alone are really creative (especially Slogra), and they looked particularly impressive at the dawn of the 32-bit console generation. Of course, graphics have improved quite a bit since then, but it’s still just plain cool to watch Gaibon pick up Slogra and repeatedly try to drop him on Alucard.

Castlevania enjoyed something of a resurgence in the 2000s, with a string of excellent portable entries that are still among the best Metroidvanias ever made. Harmony of Dissonance might be one of the weakest of those games due to its unusually low difficulty and NES-quality music, but it did make up for it with some especially impressive visuals.

Appearing in two different forms, Legion looks especially intimidating in Harmony’s brighter graphics engine. The first form is the classic ball of bodies, this time held aloft by six angelic wings, while Legion’s second form is a giant ball covered in a shell of bones. Like most Harmony of Dissonance enemies, Legion doesn’t pose much of a challenge, but it’s especially fun seeing Juste Belmont slowly chip away at the giant creature.

4. Beelzebub- Castlevania: Symphony of the Night

Beelzebub is another Castlevania boss that isn’t necessarily the most challenging, but his unique design earns him a high spot on this list. Like something out of a nightmare, or at least a Hellraiser movie, Beelzebub is a giant rotting corpse hanging by hooks. Incapable of attacking Alucard himself, he instead dispatches waves of buzzing flies that you have to fend off while dismantling him piece by piece.

While most Castlevania monsters are firmly rooted in folklore or classic horror movies, Beelzebub remains an especially impressive example of how the series can sometimes put its own stamp on more modern horror designs.

Castlevania did the whole undead dragon thing years before Game of Thrones, and this franchise’s take on that concept was significantly more awesome. Dragon zombies have actually shown up in a few games, but Circle of the Moon ups the ante by throwing a pair of them at you simultaneously. The left dragon spews fireballs at you, while the right spits out balls of electricity.

It’s a real pain of a fight, and when you finally take out one of the dragons, the other one regains a bunch of health by feeding on the corpse of its fallen companion. Years later, this remains one of the best, and most difficult, boss fights in any Castlevania game.

The true source of Dracula’s power makes for one of the most graphically interesting boss fights in the franchise. The idea of “Chaos” as an enemy isn’t new in video games, but in Aria of Sorrow, Chaos has two forms. First, Soma fights it as three demonic statues circle around the screen. When they go down, Chaos reveals itself as a simple black orb defended by four projectile shooting eyes and a massive skeletal dragon. It’s a nonstop kaleidoscopic feast for the eyes that resembles, well…chaos.

Aria of Sorrow is arguably the one other Metroidvania that comes closest to matching (or even exceeding) the greatness of Symphony of the Night, and a lot of that is due to its fantastic creature design. This incredible design contributes to Chaos’ status as one of the best boss battles in the series. Still, Chaos isn’t the greatest threat the Belmonts and company have faced…

Of course, Dracula had to be number one on the list. The eternal quest to slay him is the entire reason the Castlevania series exists. Which Dracula to pick, though? After all, there have been a lot of great final confrontations with the head bloodsucker over the years. For a lot of gamers, the final battle in Super Castlevania IV is especially iconic, but it also doesn’t hold many surprises.

In Portrait of Ruin, Dracula first mixes things up by attacking with Death at his side. That’s pretty neat on its own, but after you’ve seemingly dealt with both of them, they merge into True Dracula: a giant demonic bat creature that fights with heavy stomps and screen-filling attacks. Just the design alone is way more impressive than the typical tall, pale guy in a cape. You have to pull out all the stops to beat True Dracula, making for what’s easily the best and most epic encounter in the entire franchise.