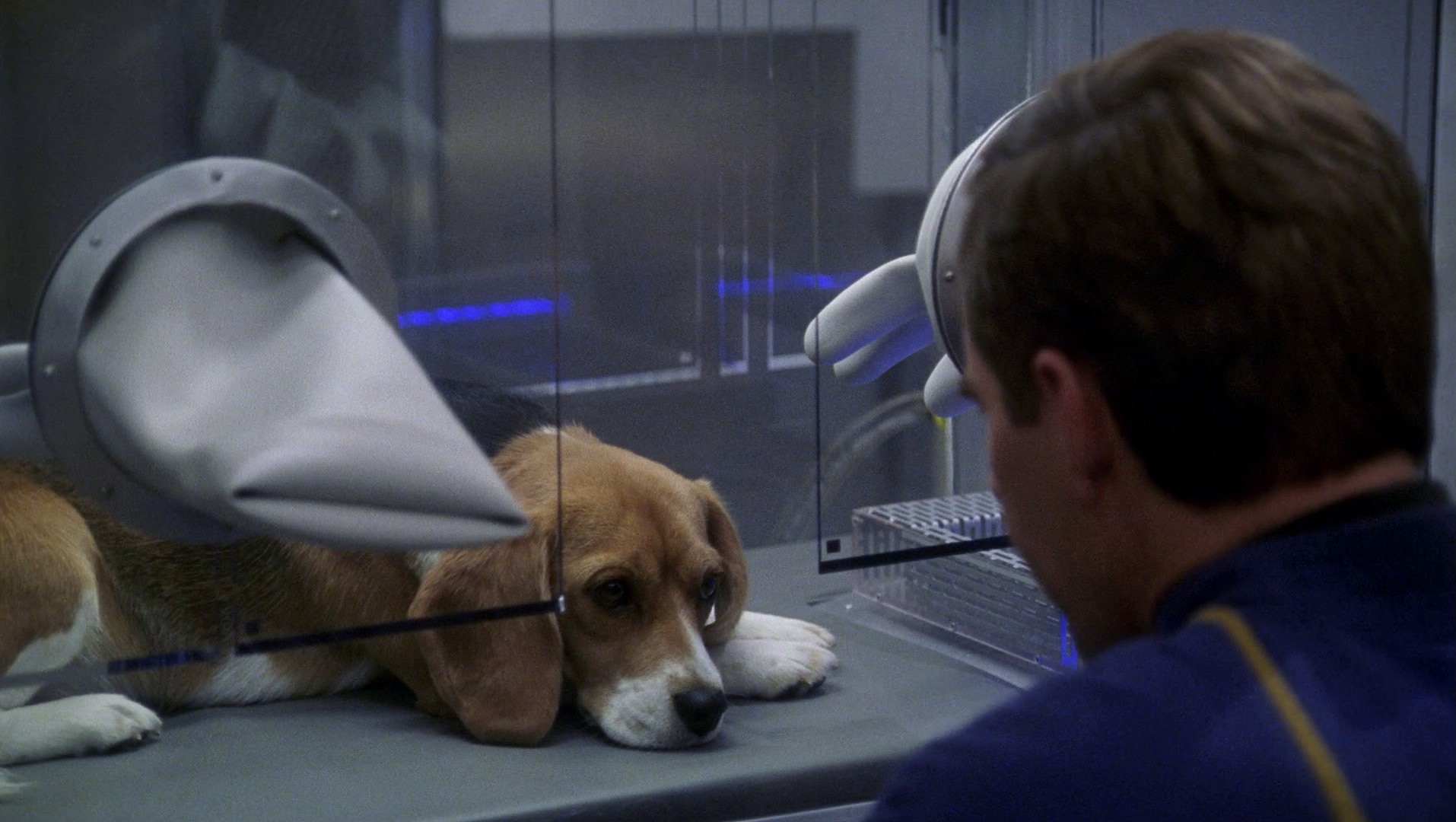 Don’t worry, this isn’t a defense of “These Are The Voyages.”* We’re here today to talk about the other “worst episode of Enterprise,” season two’s “A Night In Sickbay.”

“The episode that killed Star Trek.” “One of the worst episodes of the whole Star Trek franchise.” “Almost as bad as ‘These Are The Voyages.’” These and similar opinions of “A Night In Sickbay” are all over the Internet. The episode frequently appears on “worst episodes of all time” lists alongside “Spock’s Brain” from The Original Series and Star Trek: Voyager’s “Threshold.”

I have no intention of arguing that this is a great or outstanding episode of Star Trek – it’s not. But nor is it anything like as bad as those other two notorious examples. Does anyone turn into a lizard? No. Do any crew members abduct other crew members to have lizard sex with them? No. Does anyone’s brain get taken out and yet their body still, inexplicably, functions? No. It’s about time we went over a few of the more common complaints about this episode, to see if it really deserves its terrible reputation.

Complaint 1: Archer behaves like an idiot, and no trained diplomat should behave the way he does.

The episode’s events are kicked off when Archer takes his dog Porthos down to an alien planet on a sensitive diplomatic mission, and then gets upset when the aliens are insulted because the dog peed on one of their sacred trees, while poor Porthos nearly dies after coming into contact with an alien pathogen.

Viewers have complained that Archer’s behaviour in this episode is childish, that no “trained diplomat” should ever think it was appropriate to bring a dog on a sensitive visit, and that the episode makes the Captain look like an idiot. He spends most of the time railing at the aliens, the Kreetassans, avoiding taking any responsibility for what happened, and suggesting that he might refuse to apologise.

Bringing Porthos may not have been the brightest idea in the world, but it isn’t the act of total idiocy critics have made it out to be either. Archer himself points out repeatedly that they told the Kreetassans he was planning on bringing Porthos, and the Kreetassans said nothing about their sacred trees, plus they endangered Porthos’ life by not running proper checks on his genome. Should Archer have known better than to try to bring the dog with him at all, considering an alien species may not understand the nature of the dog-human relationship? Yes, and T’Pol tells him as much in the episode. Is he completely irredeemably stupid for thinking that he’d taken appropriate precautions and wanting to give his dog some exercise? No.

Archer’s reactions are also aggravated by the fact that the Kreetassans are, to put it mildly, gigantic pains in the backside. In their previous encounter, in the first season episode Vox Sola, the Kreetassans took offense because the Enterprise crew ate in front of them, which they consider vulgar. Except the crew didn’t just turn up to their planet touting takeaway – they were eating in their mess hall on their own ship. You know, the room set aside specifically for eating, an important social activity in Earth culture. The Kreetassans’ reaction is ridiculous and made worse by their reluctance to explain the problem, a reluctance they show again in this episode. Sure, Archer should grow up and get over it, but his frustration, while unprofessional, is very human.

It’s also worth bearing in mind the title of the episode – this takes place over the course of a sleepless night during which Archer is afraid Porthos is dying. He is stressed, emotional, and on edge, and he’s lashing out. By morning (and with Porthos thankfully having survived) he has cooled down and started behaving more appropriately again. And none of Archer’s complaints are actually communicated to the Kreetassans – he’s sounding off to his crew and his colleagues about a frustrating situation. He may not be the world’s best diplomat, but there are real life diplomats guilty of worse offences.

Complaint 2: Archer shouldn’t be whining so much about his dog.

How you feel about this one is going to depend partly on how you feel about dogs, or about pets in general. As a person who has slept in the lounge to watch over and comfort a sick dog, I have every sympathy with how Archer feels. If my dog is sick, you can bet I’m not at my best at work, especially if I’ve also had very little sleep. Archer’s way of explaining this, calling Porthos “my beagle, my pal”, may be a cringe-worthy way to put it, but those of us with “subservient quadrupeds” at home really are very attached to them.

Incidentally, given that Phlox’s bizarre treatment for Porthos involves drowning and reviving him, this episode initiates the dog into the grand tradition of Star Trek episodes that “kill” main characters only to bring them back to life again.

Complaint 3: Archer’s romantic feelings for T’Pol come out of nowhere and aren’t convincing.

While many viewers consider Archer’s romantic feelings for T’Pol in this episode to be a one-off story thread that was never picked up again, this is actually the end of a slight romantic thread between the two of them that started in season one, but largely fizzled out afterwards. Archer’s defence of T’Pol in “Fusion” could be assumed to be no more than a Captain protecting a member of his crew, but as well as several aside glances over the first season, they snuggle up together under a blanket in “The Andorian Incident”; in “Fallen Hero,” Vulcan ambassador V’Lar tells them she sees a “great bond” of “friendship” between them, and in “Shockwave Part 1,” T’Pol tells Archer she has his back. That may not sound like much, but in 90s Trek terms, that was practically a relationship.

The suggestion of an Archer/T’Pol romance would come up once more, in season three’s “Twilight.” Nothing to do with sparkly vampires, this episode had originally been suggested as a romantic storyline between Captain Janeway and First Officer Chakotay on Star Trek: Voyager, a couple who flirted mercilessly for seven years before Chakotay was inexplicably paired with Seven of Nine at the last minute. Re-written for Captain Archer and his First Officer, this episode is often considered one of Enterprise’s best – so it’s not the sexual tension between Archer and T’Pol itself that is the issue with “A Night In Sickbay,” merely the sloppy execution.

The main reason the idea of a romance between the two has such a poor reputation is that the way it’s brought up here feels rather strange, with Phlox insisting Archer’s concern for his dog is actually stress caused by underlying sexual tension, and some very dubious “Polarian slips” (“the breast I can,” really? With poor Jolene Blalock in that catsuit?). It’s true that the dream sequence in which Porthos’ funeral becomes a romantic moment between Archer and T’Pol, followed by yet more sexy “decontamination”, is rather silly, but it is just a dream. No one mated with each other and had lizard babies, and dreams are often weird – it’s not that bad a scene.

But the idea in itself isn’t inherently terrible – T’Pol and Archer do work well together and she is an obviously attractive woman. However, when she calmly tells Archer any kind of relationship would be inappropriate he does the right thing and moves on, and that’s the end of that. It’s a simple story of an attraction at work that isn’t pursued.

Similarly, the daft sequence at the end of the episode, where Archer has to go through a bizarre ritual in order to apologise to the Kreetassans, is a simple case of humour gone wrong. It’s too silly, his hairdo is bizarre, and it makes no sense. But again, no one turns into a lizard, or randomly picks a fight with some cavemen. It’s not great, but it’s hardly the worst Star Trek has to offer.

The main sources of humour in the episode are, of course, Phlox’s various shenanigans overnight in sickbay. He trims his toenails, he brushes his tongue, he and Archer chase a bat around. If you don’t find any of that funny, then sure, you may find the episode grating. Perhaps I just have a terrible sense of humour, but what can I say – I thought it was funny. Judging by this episode’s Hugo nomination, I’m not the only one.

This episode is sometimes accused of having “killed Star Trek” and blamed for Enterprise’s dwindling viewing figures and eventual cancellation. It’s true that it has flaws and it won’t be bothering any “Best Of” lists. But it doesn’t deserve its place on all the ‘Worst Of’ lists either. It’s a good chance to get to know Phlox a bit better, a fascinating and genuinely alien character who didn’t get the spotlight often enough. The interaction between Phlox and Archer here is genuinely fun to watch. It’s light and fluffy and silly, and maybe that’s not your bag, but that doesn’t make it bad. It shows Archer at his worst, at his most childish and petulant, but how can we really get to know any character without seeing them at their lowest? By the end of the episode, he has regained his sense of duty and is fulfilling his role as normal once again. He had a bad night – so do we all, sometimes. It’s about time we cut him, and this episode, some slack.

*Though if that was a season finale, rather than a series finale, and if it hadn’t killed off a major character, it really wouldn’t be that bad either.

How Did the Cordyceps Infection Start In The Last of Us Games?
Should Marvel Change MCU Strategy on Disney+?
The Witcher Season 1 Episode 5 “Bottled Appetites” | AfterBuzz TV
Wynonna Earp Season 3 Episode 5 Review & After Show
Batman: The Doom That Came to Gotham | Trailer | DC