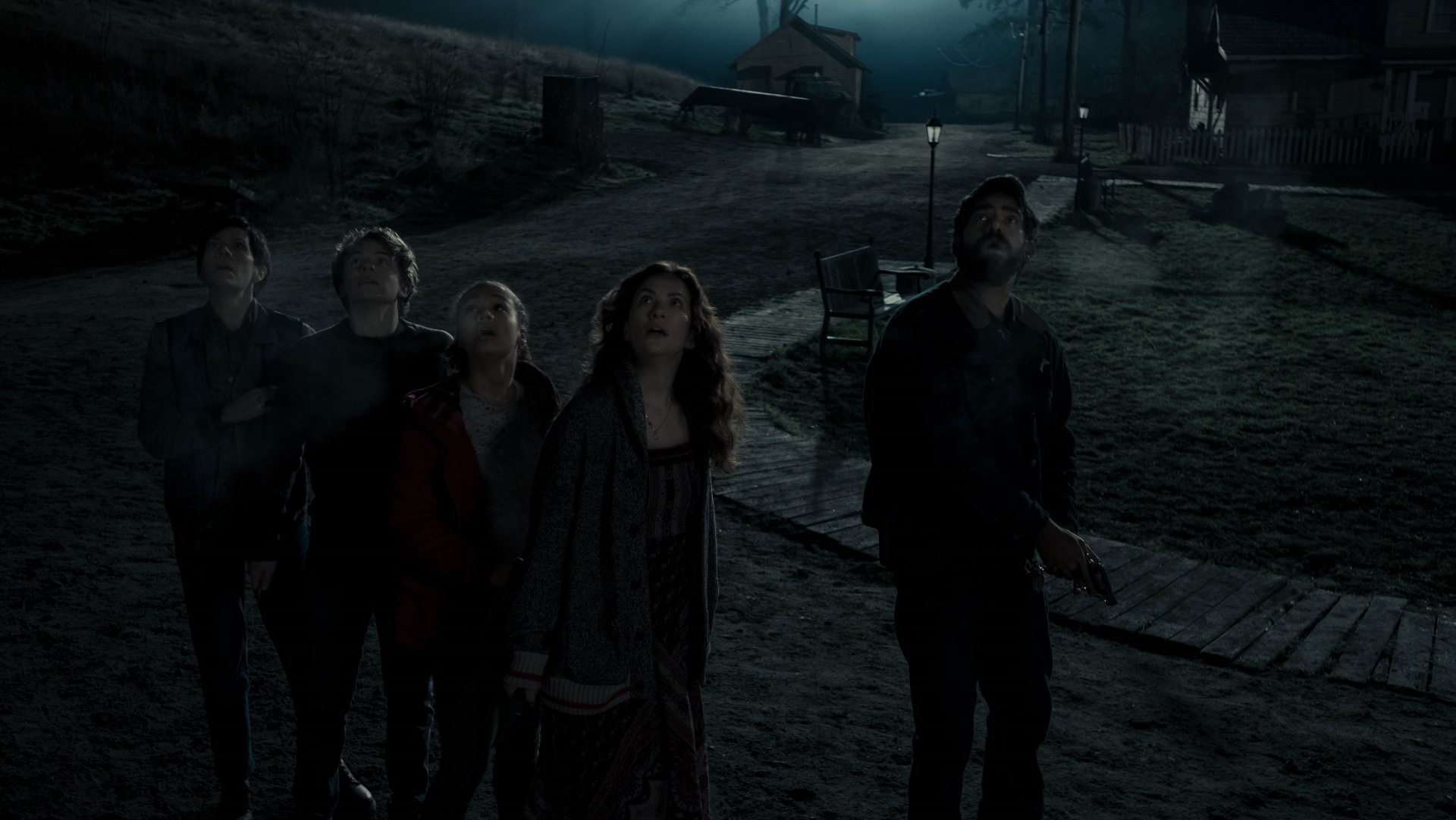 Ending a horror story is hard.

Perhaps no one knows that better than Mike Flanagan, the writer-director behind horror hits like Doctor Sleep, The Haunting of Hill House, and The Haunting of Bly Manor. After observing the occasional less-than-enthusiastic reaction to the endings of some of his other projects, Flanagan decided to end his latest, Netflix series Midnight Mass, on his own terms.

What’s Up with Mildred Gunning and John Pruitt?

Monsignor John Pruitt a.k.a. Father Paul (Hamish Linklater) was, by all indications, a good Christian man.

“The thing we kept coming back to is that authentically, through-and-through evil people are very rare. We’re all way more complicated. The humanity of Father Paul was something that was baked in relatively early,” Flanagan says.

Though Pruitt is not a bad man, per se, he is a deeply flawed one. A long time ago, before the “war” (probably World War II or The Korean War), Pruitt hooked up with the married Mildred Gunning and fathered their daughter Sarah Gunning out of wedlock. That is obviously a big no-no for a priest and Pruitt lived with the guilt of denying his daughter for decades.

Pruitt finally got a chance to alleviate that guilt when he came across a curious creature in Damascus. In this fictional universe where the concept of a vampire is clearly not well known, John Pruitt made the understandable mistake of confusing a monstrous vampire for an equally monstrous angel. After all, the angels of the bible are so visually terrifying that they make a habit of telling those they visit “be not afraid.”

Pruitt thought this angel had granted him the gift of eternal life, just like the Bible promises. He then decides to share that gift with his congregation. The priest’s major sin here though is pride. He didn’t share the angel’s gift with his congregation out of pure benevolence. He did it because he wanted many more years of life in his prime with Mildred and Sarah at his side. Catholicism means everything to Pruitt. And yet, he would cast it all aside for another chance to have the family he wanted.

“If you showed up and asked me, I would have taken this collar off and gone with you. Gone with you anywhere in the world,” Pruitt tells Mildred after she’s been vampirified.

That’s a touching sentiment from the artist formerly known as Father Paul but it’s unfortunately a destructive one.

“When it became clear that Paul could do bad things with pure motives, the show came into clearer focus. There’s only one character in the whole show who I think is evil and it’s not Father Paul,” Flanagan says.

Only one character who is evil? Who could Flanagan be referr….ohhh.

What Were the Vampires’ Plans?

Flanagan actually never confirms which character he sees as evil, but Bev Keane (Samantha Sloyan) seems to be the best fit…unless we count the angel, and he just seems to be a hungry, growing boy.

Bev is, let’s say, a real piece of work. As beautifully depicted by Sloyan, Bev Keane is the officious church lady who can’t keep her nose out of other people’s business. After Mildred talks some sense into John Pruitt, he understands that he and his congregation “are the wolves” and refuses to participate further. That leaves a power vacuum at the top, which Bev is more than happy to step into.

Now that Bev has a veritable army of superpowered vampires what does she intend to do with them? The same thing that all Bevs want to do: make more Bevs. Bev represents the worst of colonial Christianity and its historical penchant for converting all to its kingdom of heaven…through any means necessary.

When Erin Greene (Kate Siegel) finds out that Bev and friends have merely disabled the boats and not destroyed them, she realizes that their ultimate plan is to eventually take their vampire party to the mainland and create a whole planet of enlightened Christians who just happy to have an insatiable taste for blood and a severe UV-ray allergy.

What Happens to Crockett Island?

Ironically, it’s part of Bev’s plan that eventually dooms her and her kind. When one of Bev’s lackeys proposes putting out a fire that the human crew started because the whole island could burn to nothing like in ‘84, Bev’s eyes light up.

Surely this is Revelation. And Revelation means a hale mixed with fire and blood. There will be a flood of fire that ends the world and St. Patrick’s church will be the arc. That’s a great plan and all…as long as something doesn’t happen to the arc.

Welp. Sarah Gunning burns down St. Patrick’s and Sheriff Hassan and Erin Greene (with an assist from Hassan’s son) burn down the rec center. As if burning a church designated as an arc wasn’t symbolically compelling enough, recall that the rec center next to it is equally as symbolic of Bev’s greed. It was Bev who convinced Crockett Island to take the oil company’s money for ruining their island rather than pursuing litigation. And all they got out of that settlement money was that stupid rec center.

With the church and the rec center gone, there are no man-made structures for the vampires to hide from the sun in the coming morning. And that’s how an entire island of 120-ish vampires perishes simultaneously when the sun rises.

Why Do Leeza and Warren Survive?

All of Crockett Island perishes save for two actually. Warren Flynn (Igby Rigney) and Leeza Scarborough (Annarah Cymone) are spared thanks to some quick thinking. Putting the only two remaining non-vampirized children in harm’s way is not an option for Erin, Sarah, Hassan, and Annie. Thankfully, Warren knows of one secret canoe to reach the “Uppards” that Bev’s crew wouldn’t know about.

The canoe doesn’t take Warren and Leeza to the mainland but it does get them away from the carnage to come. The last shot of the series is Warren and Leeza floating peacefully and Leeza announcing that she can no longer feel her legs. This means that the last bit of “angel” blood has likely left her system and with it Pruitt’s vampire legacy is over.

Saving Warren and Leeza has practical, emotional implications for Midnight Mass’s characters but it also has some symbolic ones as well. The concept of witnessing and witnesses themselves are very important in the Bible. As a second-hand text (though purportedly with every word inspired by God) there would be no gospel without witnesses. Good news is only half the battle. Someone to witness and report on the good news is the other half. Now Warren and Leeza can report on the ultimate good news that the world is saved.

“That last moment of the next generation looking out at the ashes of what the grown ups made – that’s what my kids are gonna get no matter what,” Flanagan says. “That’s what all of our kids are gonna get. I wish it wasn’t as on fire as it it. But it really is. We’re never going to be able to explain adequately to our children what happened to the planet they inherited.”

What Happens to the Angel?

With all of Crockett Island burned to the ground, the world’s vampire nightmare is over, right? Well that depends on how well you think an angel can fly with torn wings. No, that’s not an aphorism or a poem, it’s the real question facing the end of Midnight Mass.

As if saving Warren and Leeza and upending Bev Keane’s plans weren’t enough, Erin leaves one last little gift for humanity before she dies. While the angel attacks her and drinks her sweet, sweet blood, Erin begins systematically, yet carefully cutting holes in its leathery wings. At first the angel is kind of annoyed but his hunger supersedes any level of discomfort or pain he’s feeling.

Later on, while Warren and Leeza watch their home burn they see the angel flying away but in a halted, loopy pattern. The kids aren’t sure if the beast will have time to find shelter before the sun rises. According to Flanagan, if Midnight Mass is a parable (and he assures us it is) then the ultimate lesson of all this isn’t too hard to glean.

“The angel doesn’t represent vampirism or horror but corruption in any belief system,” he says. “It represents fundamentalism and fanaticism. That’s never gonna go away. You might chase it away from your community for a minute. You might send it off to the sunrise and hope that that corrupting ideology will disappear. But it won’t. And the show could never show the angel die for that reason.”

With that in mind, the angel’s flawed flight pattern isn’t so much Inception’s spinning top but rather a promise that evil will find a way. And then we puny human beings will just have to find a way to stop it all over again. If that’s not Biblical then we don’t know what is.

All seven episodes of Midnight Mass are available to stream on Netflix now.