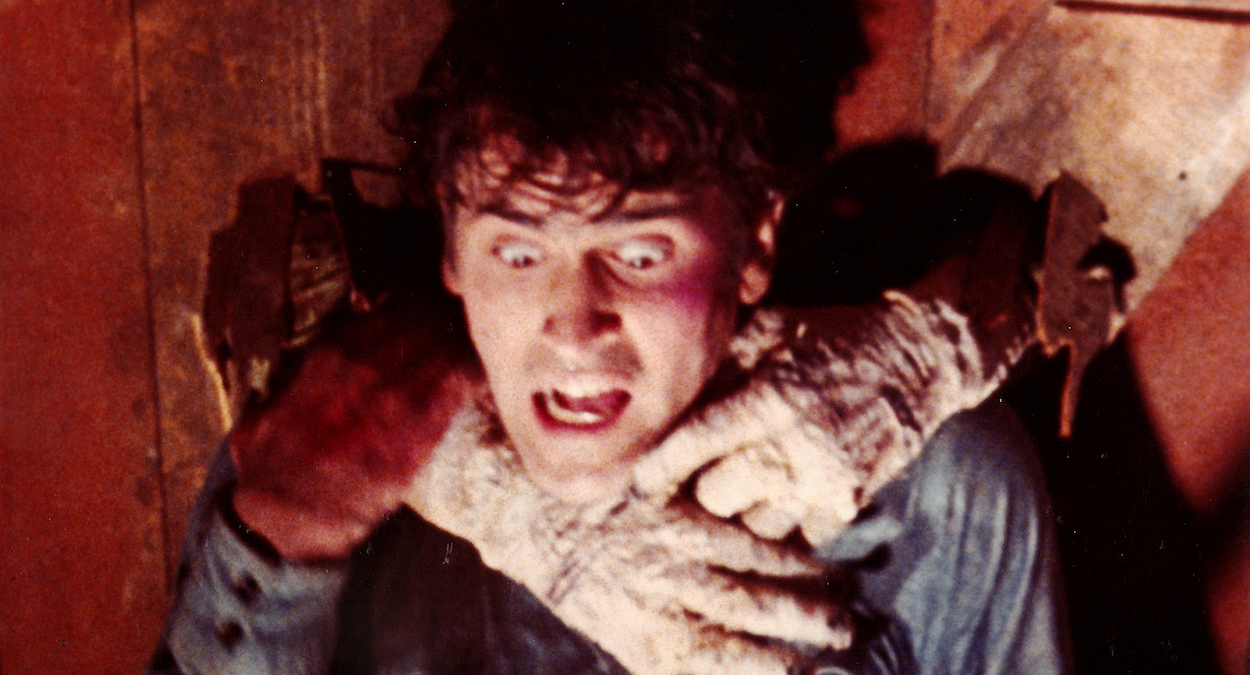 This article is presented by: 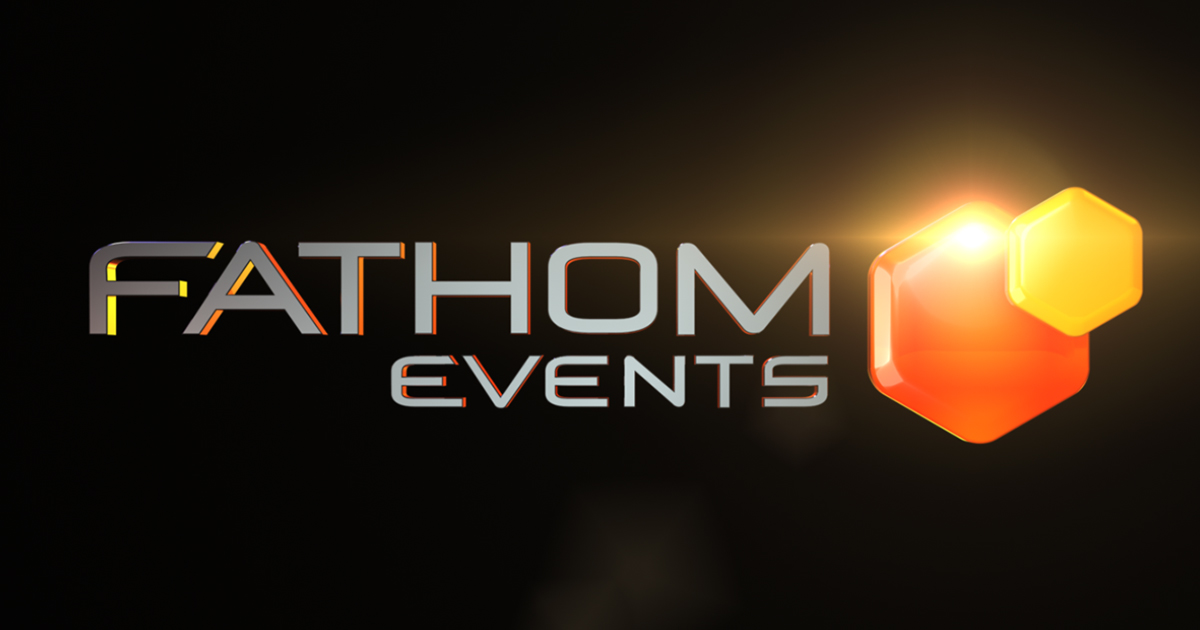 When The Evil Dead returns to theaters nationwide on Oct. 7 as an exclusive one-night only Fathom event, complete with a Bruce Campbell introduction, it will be almost 40 years to the day since the film premiered at Detroit’s Redford Theatre, an ancient movie palace that even now maintains a classic theater organ in the back. During that 1981 debut, the movie was still titled “The Book of the Dead,” and Sam Raimi was renting ambulances to place outside the cinema in order to set a mood. There was a line out the door. Few might’ve guessed from such inauspicious beginnings that they’d be launching a horror classic. But four decades later, it’s still here.

The Evil Dead’s persistence at creating new fans year after year, and generation after generation, is a testament to its eagerness to be the “ultimate experience in grueling terror.” Because for a moment there, even years, this quintessential cabin in the woods movie appeared to be an outlier—a truly independent affair in which a handful of school chums stumbled around in the Tennessee wilderness and then struggled to get the movie seen by audiences. One of its financiers was allegedly horrified by its tone during that Michigan premiere; several British courts found it obscene, leading to a prolonged legal battle over censorship in the UK; and the film even only received major distribution at all because Stephen King wrote a glowing review in 1982 after seeing it at Cannes.

There’s enough mythology around how The Evil Dead was made and released to fill the pages of the Necronomicon. Twice. But year by year, story by story, that self-perpetuating legend has grown until it developed one of the greatest legacies in horror—until it became a genuine classic. Perhaps that’s why when we sit down to chat with Campbell ahead of the film’s Fathom re-release, he can’t help but laugh at some of the more embellished stories about its genesis. After all, Raimi, producer Rob Tapert, and Campbell, by his own admission, have had an intentional hand in nurturing many of the tall tales surrounding the movie.

“Sam and I encouraged a lie for years about the last shot in the movie,” Campbell says with a chuckle over the phone. He’s referring to the famous shot near the end of the picture where the unseen evil entity in the woods—or “the Force” as Raimi used to call it back then—smashes through the doors of the cabin and comes riding headlong into Campbell’s ample chin.

Says Campbell, “We had a whole story about Sam riding a motorcycle in order to smash through the doors. We said we did it last because I was probably going to get hurt, because in order to get the camera close enough, the motorcycle pretty much had to make contact [with me]. So we sort of perpetuated that lie, very successfully, for decades.”

It’s an impressive overstatement, even if the actual truth of the shot is pretty nifty on its own: Raimi came running through the doors, which were pulled away by ropes off-screen, while the director held above his head an Arriflex camera with a wide-angle lens bolted to a board. The low-fi elements of it are refreshingly cool, even more so now. Still, a motorcycle, it ain’t.

“The great comedian W.C. Fields wrote all his own press releases, and he lied in all of ‘em,” Campbell muses. “So we enjoyed doing that sort of stuff and adding to the myth.”

It’s this type of showmanship that comes naturally to Campbell, as well as Raimi and Tapert—all of whom were executive producers on The Evil Dead. They demonstrated it early when they were able to actually get the financing to make the film back in the late ‘70s after dropping out of college, and they did it again when they succeeded at making a horror spectacle so extreme, and so genuinely innovative, that we’re still talking about it. Campbell even fondly recalls how they all bought suits from thrift stores and then went around Detroit trying to pitch the movie for investors to local businessmen and dentists.

“We bought briefcases,” says Campbell. “Rob and Sam had a slimmer briefcase, and I had a thicker one because I carried a lot of the paperwork and checkbooks, and stuff like that. But we did carry briefcases because we thought that’s what investors would want to see. And we wore suits and ties, because Detroit businessmen in the ‘70s wore suits and ties.”

Still, looking back at this early bid for youthful professionalism, Campbell can point to plenty of hardships that never needed any hyperbole.

During our conversation, the actor recites with a matter of fact exhaustion all the basic amenities that should be on any film set, yet were totally absent during the making of The Evil Dead. It’s as if even their memory is wearying. For one thing, there were no bathrooms at the real-life cabin; not to mention the actual nightmare that came from having no heat during the middle of an Appalachian winter; they instead relied on a portable kerosene heater for the whole production. There was also no running water and thus no way  to bathe; safety precautions were non-existent, and then there was that one time a bull came running across a field at Raimi and all the production could do was watch. Even the “craft services’” would deliver doughy cake and tell Campbell it was pizza. He didn’t buy that either.

“Almost every crew member or actor got hurt in some way,” Campbell estimates. His own injury came after a tough shoot one night in the cemetery. After running down the hill and jumping, Campbell broke his ankle. As he recalls now, “We had to keep shooting the rest of the night, with Sam and Rob Tapert cornering me in a room, poking my ankle with sticks because they thought it was funny.” He later adds, “I’ll always favor that ankle lovingly, because I know it came from Sam.”

Be that as it may, Campbell looks back on the whole experience with as much nostalgia as shudders.

“It’s both, because I don’t really remember how horrible it was,” Campbell says. “My memory doesn’t really work that way. My memory tends to gloss over stuff. So yeah, no question it was uncomfortable, but we had nothing to compare it to. So it wasn’t until later that we figured out how bad it was, and by that point, it’s over. So what’s the difference?”

How ever he considers that time in the woods now, it certainly paid off. With its extreme use of gore, grandiose camera movements, and filmmaking flair, The Evil Dead remains a singular experience—one might even say grueling. It paved the way for sequels like Evil Dead II and Army of Darkness, plus the much later television series Ash vs Evil Dead. And for Campbell there’s something particularly provocative and enduring about that first effort.

“Sam’s a good filmmaker, and he’s got sequences in there that are very visually impressive,” Campbell says. “So he sort of drew them in, stylistically. But it’s also sort of docu-horror, the way we actually shot it in a real cabin in the middle of nowhere. You can kind of tell, so it seeps into the movie.”

When looking at how The Evil Dead was made versus Campbell’s Starz TV series, the actor points out what a difference professional expertise makes, as well as how it can change the visceral grime and dirt under the fingernails that audiences can intuitively feel while watching such a movie.

“In the first Evil Dead, Ash hears a noise by a window, he sees a shadow, he turns with the shotgun, and he blows the window out,” says Campbell. “Well, in 1979 in rural Tennessee, you just take a shotgun and you blow the window out. There’s no stunt guy. There’s no nothing…. And then by the time you get to Ash vs Evil Dead, I’d raise the shotgun and a guy on set would go, ‘Ready and bang!’ When he says, ‘Bang,’ I’d jerk the gun, and a guy on set hits me with an interactive light for the flash. And they put a digital flash in that’s any length you want, any color we want, and a big smoke plume and a Howitzer cannon sound effect.”

Campbell admits it’s safer, but it loses that handcrafted quality which makes The Evil Dead still both so creepy and, depending on the audience, amusing. When asked if he misses those old ways, Campbell concedes, “I only miss it a little bit, because there was a lot of dumb stuff done on movie sets back in the day that should not have been done. We skirted around safety stuff, and film sets are much safer now. So I’ll take now for the sake of safety, but the funny thing is we just didn’t know any other way.”

It’s safe to say that they wouldn’t make The Evil Dead today like they did back then, but then that’s the original’s charm, and the root of the stories we tell about it. Even when compared to the sequels and spinoffs where Raimi’s camera rigs got more elaborate, and Campbell’s acting got better with each sharpened wisecrack, there is nothing as chilling as seeing actors genuinely freezing on a winter night.

By the time of Army of Darkness and Ash vs Evil Dead, Campbell was able to really develop the character of Ashley Williams, and his own acting talents, turning the protagonist into what Campbell estimates is the archetypal “ugly American.” One might wonder then if the performer has more satisfaction from the later projects—he does tell us the Starz TV show was his chance to be like George Lucas and go back and “fix all those shitty effects.” If so, Campbell keeps such thoughts to himself while speaking with pride on what the first Evil Dead did for his career and the horror genre.

“You don’t always want to be known for the [character you played] when you had the least experience,” Campbell considers. “So you’re always going to have the echo of Ash wherever I go, which is fine. But I’m glad that people are still finding it relevant all these years later. You can’t ever look down on it, because it got me into the film business. So mostly, I’m just grateful.”

Fathom Events will present The Evil Dead 40th Anniversary with Bruce Campbell at theaters across the U.S. on Thursday, Oct. 7. Get your tickets now at www.FathomEvents.com

Dave Bautista Has Talked to James Gunn About Future DC Movie Plans
The Last of Us: What Happens to Bill and Frank In the Game?
Marvel Studios’ Ant-Man and The Wasp: Quantumania | Enter the Quantum Realm
Dead Space Remake Release Time: When Will the Game be Playable?
Other Space | Comedy Sci-Fi Series | Coming Soon to DUST on TV