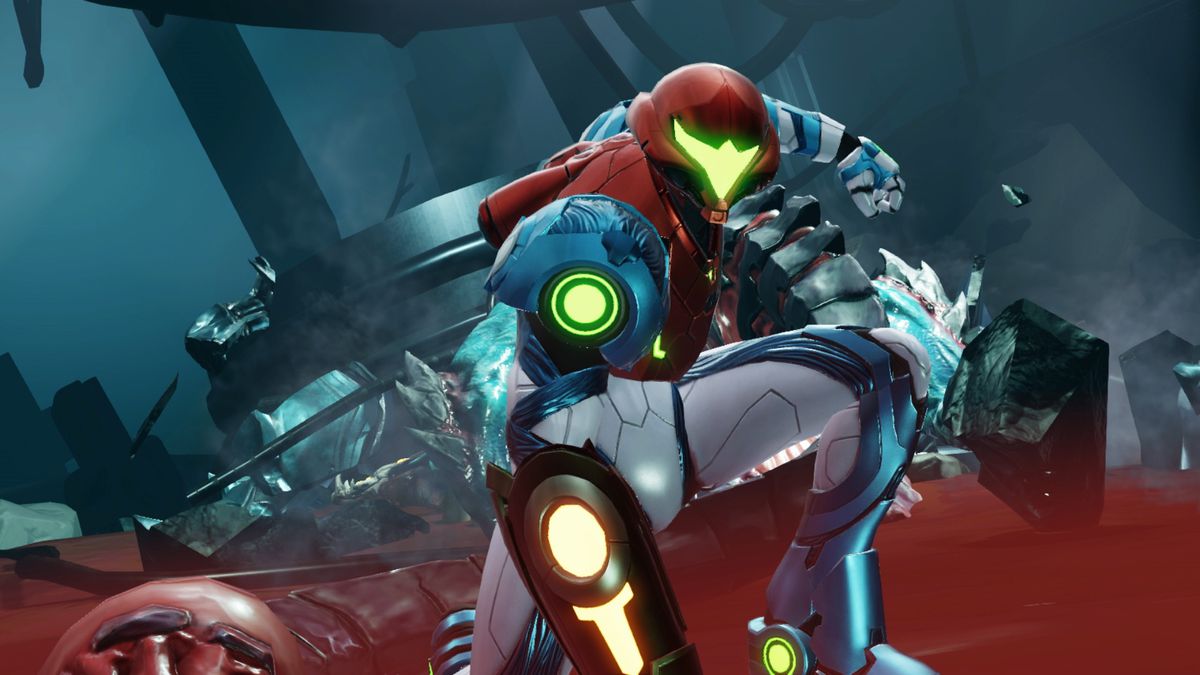 The latest Metroid Dread previews include quite a few (mostly positive) words about the highly-anticipated upcoming Switch game, but the one word that’s jumping out at everyone at the moment is “scary.”

Granted, the Metroid franchise has always utilized horror elements (its revolutionary atmosphere can partially be attributed to the various ways it was influenced by the Alien films), but with a few possible exceptions (most notably the SA-X sequences from Metroid Fusion), it’s tough to say that the Metroid franchise has ever been especially frightening. Creepy, perhaps, but not really that more traditional kind of scary that makes you jump out of your seat or keeps you up at night. Yet, early previews of Dread suggest that the game’s opening hours feature moments of outright horror highlighted by your battles against the new E.M.M.I. robots: Terminator-like hunters that will stop at nothing to kill Samus.

So is Metroid Dread scary? Well, I sadly have not had the chance to play the game yet, and even those who have played the game have been quick to say that it’s hard to tell how consistently creepy the game will be beyond those opening moments. We’re all going to have to wait until the game’s October 8 release date to see if it lives up to its full potential in that respect.

What’s really interesting at the moment, though, isn’t so much the debate over whether or not this particular game will be scary but the early concerns from some gamers who seemingly doubt that a 2D game can be scary in the first place.

In a way, it’s easy to understand why some people feel that 3D is simply superior to 2D when it comes to horror games. Our own list of the scariest horror games ever featured 18 3D titles compared to just two 2D/2.5D titles (Clock Tower and Darkwood), so I can’t easily argue against the suggestion that there are more memorable 3D horror games than 2D horror games. Besides, the rise of the horror genre coincided with the rise of 3D gaming, and, since then, most major developers have elected to make 3D horror games over 2D horror games when they’ve been lucky enough to secure the funding for a horror game at all. As such, there have certainly been more 3D horror games to talk about in the last 25 years or so.

Of course, it’s also difficult to simply point at some of the best 2D horror games ever and close the door on this topic. Yes, titles like The Last Door, Home, The Cat Lady, and the aforementioned Darkwood and Clock Tower are genuinely scary 2D games (in my mind), but this debate seems to be more about the viability of genuinely scary 2D games rather than a hand-picked selection of titles that exemplify that concept. Besides, convincing someone to play one of the scariest 2D horror games ever made is different than convincing them that genuinely scary 2D games (especially a 2D game published by Nintendo) are more than exceptions to what many see as a rule.

No the best argument for the viability of 2D horror is the fact that there have actually been countless intimidating/scary 2D games released over the years that have relied on the same concept that Metroid Dread looks to emphasize: the lingering feeling of inevitable defeat.

Long before Resident Evil revolutionized horror gaming and gave a generation of gamers nightmares, some of the most intimidating games in our collections were also the most difficult. Contra, Ninja Gaiden, Castlevania 3…our list of the hardest NES games ever essentially doubles as a collection of the games you almost dreaded to play because you weren’t confident you could beat them.

Indeed, the “Dread” part of Metroid Dread‘s title feels like a more revealing word choice than we previously suspected. While the decision to limit Dread‘s E.M.I.I. encounters to specific rooms that are marked on your map might feel like a poor substitute for the more chaotic encounters against video game stalkers in 3D titles (such as the Mr. X moments in the Resident Evil 2 remake), this doesn’t seem like a case of Dread‘s developers simply trying to compensate for the technological “downgrade” by making these encounters more structured.

Instead, the decision to “telegraph” your encounters against Dread‘s E.M.I.I. foes feels very much deliberate and part of Dread developer Mercury Steam’s desire to leave you genuinely dreading having to enter those rooms. Yes, you know that a battle against one of these enemies is coming, but are you properly prepared for it? Can you survive rather than just play through the scare? It’s the old Alfred Hitchcock “bomb theory” approach to suspense/horror in which you show the audience that there’s a bomb that’s about to explode rather than have it be a surprise. The latter may result in more of a “jump,” but the former makes the jump feel like more of a relief compared to the tension that came before.

The only thing that horror fans love more than watching horror is debating what is truly scary and what actually qualifies as horror. Through years worth of those debates, the truth we keep coming back to is that there is no universal horror experience and that the variety of the genre is part of what makes it so great. Some works of horror ultimately scare more people than others, but horror is sometimes more of a mood and a feeling than it is a tally of nightmares caused or time you jumped out of your seat.

So maybe Metroid Dread won’t lead to as many reaction videos as the latest VR horror game or give you as many nightmares as Silent Hill 2 once did. However, if one of the pillars of the horror genre is indeed that sense of dread you feel from the thought of simply having to experience the horror game/movie/show/book itself, then the fact of the matter is that some of the most outright intimidating games ever made have been 2D titles. The mechanical demands of many 2D titles and that feeling of being deprived of that extra dimension of movement have historically combined to grant 2D games a baseline level of intimidation that can certainly be turned into pure terror in the right hands.

If Metroid Dread can capitalize on that intimidation factor and combine it with some of the more “traditionally” creepy qualities we’ve seen from this series in the past, then it may very well not only show how uniquely scary 2D games can be but perhaps inspire more developers to pursue this style of horror that honestly deserves more love than it has historically received.

Sci-Fi Short Film “The Kid” | DUST | Throwback Thursday
Dave Bautista Has Talked to James Gunn About Future DC Movie Plans
HBO’s The Last of Us: The Changes to Bill’s Story and the “Parallel Universe” of TV
Ready | Marvel Studios’ Black Widow
Dead Space Remake: Where to Find Every Schematic