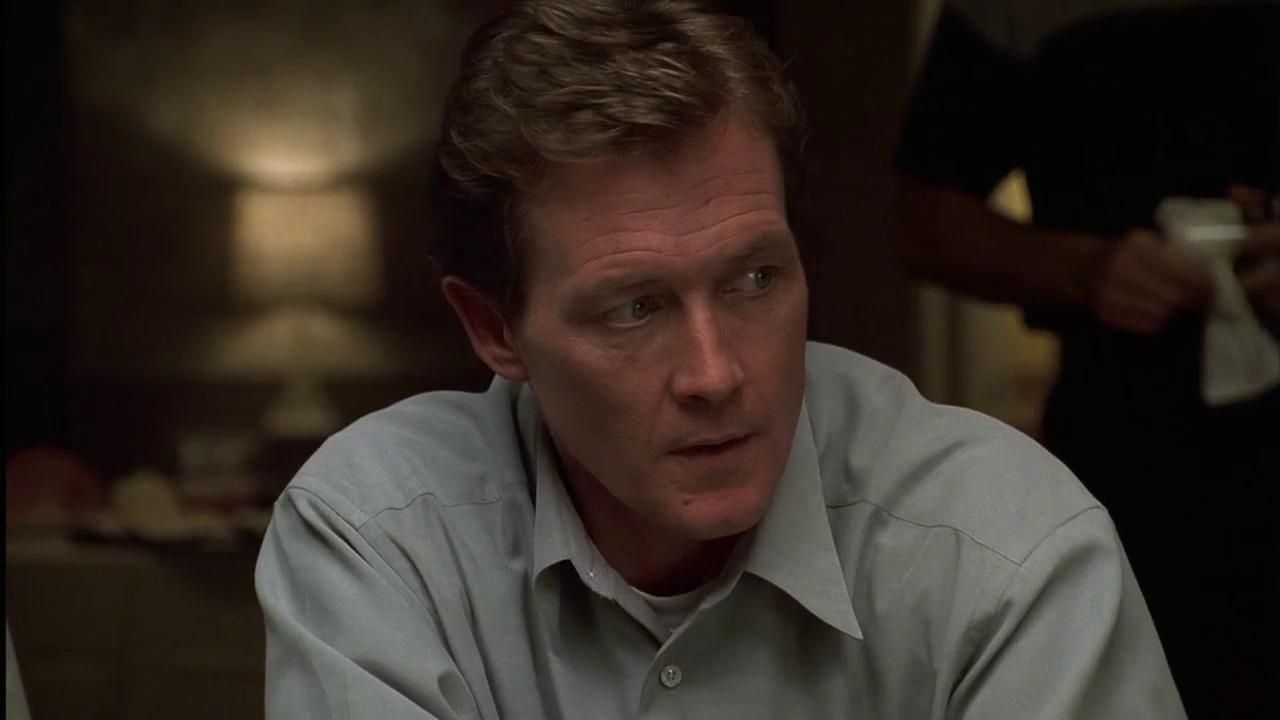 The Many Saints of Newark will tell stories about things our friends, and friends of friends, did before the events on The Sopranos. We’ll see a young Paulie Gualtieri, Silvio Manfred Dante, and Artie Bucco, all who knew Tony Soprano as a kid. One childhood friend you might not see is a prequel version of Davey Scatino. Last we heard, in the appropriately named episode “The Telltale Moozadell,” he’s now “in a mental health facility in Nevada.”

Robert Patrick is probably best known for playing the cyborg T-1000 in Terminator 2. It is an iconic role in science fiction cinema, as memorable as Arnold Schwarzenegger’s character. Patrick had to fill the shoes, suits, and unimaginative ties worn by David Duchovny’s Fox Mulder when he stepped into the last two seasons of The X-Files, as Agent John Doggett. He stumbled into playing against himself on The Walking Dead. Patrick is a skilled antagonist. Whether torturing misfits on the football field in The Faculty or making Joaquin Phoenix’s Johnny Cash Walk the Line, villainy comes quite naturally to the veteran actor. Patrick went in a seemingly different direction on The Sopranos, playing a pathetic, losing gambler who gets in too deep. But is he really a victim, or is this his most antagonizing role?

“When a guy hands you a light envelope, it’s just the beginning,” Richie Aprile (David Proval) warns Davey. Scatino is a nickel and dime player when he first sits in at Aprile’s card games, but when the numbers get large, Aprile does the honorable thing: He bars Davey from any game in town. Richie is not the bad guy here. “I know, it’s just a stutter step,” he offers, understandingly.

Davey doesn’t double down, though. That’s for suckers. He gets into the “Executive Game” with high rollers like Frank Sinatra Jr. and the New York family boss. It costs five boxes of ziti just to buy in. Davey lies to crash the high stakes game, lies to Christopher Moltisanti about how much money he can lay out, and has the balls to act surprised when Richie generously offers to stab him in his eye. Again, not the bad guy, or he would have done it, and with justification. Scatino is down $45,000 at the end of the night. This is on top of what he owes Aprile.

“What you think? I’m still the kid on the school bus,” Tony asks Davey before everything comes tumbling down. We don’t have to be told. This is not a new problem. Tony had Davey pegged from the time he landed at his school. The army brat who’d lived all over never learns his lesson. He makes bets he can’t cover and plays until he’s empty. Even Artie Bucco knows not to lend Stacino $20k for some “breathing room.” Artie says he has to pay for a new roof for his restaurant, but it’s because he already knows everything is going to fall on his friend’s head, and he’d never get his money back.

First Davey tells Tony’s collection guy he has a dentist’s appointment, forcing the boss himself to make a house call. Then Davey tries to leverage how their kids are so close, go to the same school, and how he pegged a guy in the head on some trip. As a show of goodwill, he offers up his son Eric’s SUV as a down-payment. Tony accepts and gives it to Meadow, who has driven in it enough to know where it came from. Carmela gives Tony agita over it because Davey’s brother-in-law is close to the provost at Georgetown, and she might have to make more ricotta pies for Meadow’s college.

“This kid’s father, he’s a fuckin degenerate gambler, but he’s also a respected businessman in the community and everything that goes along with that,” Tony tells his therapist, Dr. Melfi (Lorraine Bracco). “So, it becomes my fault that he lost his kid’s car? I gotta look after him because he’s a sick bastard?”

Davey’s arc starts in Season 2, Episode 6, “The Happy Wanderer,” when we meet him and his son, Eric, while they are checking out colleges. He also appears in “Bust Out” and “Funhouse.” Patrick “met David Chase for a film a couple of years prior to him coming up with the idea, or at least selling the idea, of The Sopranos,” he told Movieweb. “Then he sent me the script for “The Happy Wanderer” and said, ‘I see you in this role. It’s against type, you’ll never be cast this way, but I think it’s a brilliant idea.’”

While the character Davey is only vaguely familiar with the concept of luck, the actor was on a roll. The unfortunate gambler role came while Patrick was preparing to work on All the Pretty Horses, and director Billy Bob Thornton “asked me to go on a starvation diet, really lose some weight and try to look deathly for this character,” he told Movieweb. “David didn’t know that I was that light and that vulnerable. But anyway, it just worked.”

This is where the acting genius of Robert Patrick is most evident. He knows playing the victim on a show about villains makes him the antagonist, and he started early. While speaking on the podcast “Talking Sopranos,” Patrick told Michael Imperioli and Steve Schirripa that he started needling the star of the show from the moment they met.

“I had never met Mr. Gandolfini,” Patrick said in the interview. “I am out front on a bench smoking a cigarette with Jimmy after we’d just done this read through. And we’re trying to get to know each other a little bit because we’re supposed to be high school buddies. As the conversation was winding up, I said to him, ‘You know the scene where you come to get your money, you better bring your fucking A-game.’ And he looked at me said, ‘Oh, I’ll bring my fucking A-game,’” and flicked his cigarette at the former T-1000.

The first scene the two actors shot was when Tony shows up at Ramsey Sports and Outdoors to collect the high-stakes game money. In the “Talking Sopranos” interview, Patrick said Gandolfini told him was hungover, they did it in “one take, and he scared the living shit out of me. I was so intimidated. What a fantastic experience.” He also said he attended a Gamblers Anonymous meeting to prepare for the role, and learned that a lot of people got hooked on gambling because “it made them feel powerful, like John Wayne or Sean Connery.”

That power fades as fast as any promise a scorpion makes a frog when Tony yells “get the fuck back in your fuckin hole now” to the kid he knew on the school bus, before offering a consolatory “Davey, you’re doing a good job.” In “Bust Out,” Tony and Richie become partners in Ramsey Sports and Outdoors. When David married his wife Christine, her father owned the sporting goods store, and after he died it went to her. Because Christine’s name is on the title, Davey can’t mortgage it, so Tony’s crew takes inventory.

The Soprano/Aprile venture runs up credit for bulk orders, buying barber scissors, airline tickets, and red picnic coolers. “Everybody wants one, nobody has a fucking idea how much they cost,” Richie says. “You put a Nigerian selling these on the streets for a couple/three bucks apiece, who’s not gonna say gimme one?” In a friendly late-night chat, Tony says it’s just bankruptcy fraud, and Davey will be “free and clear” when it’s over. It could have gone the other way, Tony says, explaining how he would then be crying. It’s business. His business.

Davey doesn’t even notice his kid gets into Georgetown. He’s got the muzzle of a gun in his mouth at one point, and is almost begging for his brother-in-law, Victor Musto, to beat him senseless. It is a brilliant demise on a series filled with shallow graves and burials in deep seas.

Liquidation trucks take away whatever’s left of Ramsey Sport & Outdoor except the property for sale sign. During Meadow’s high school graduation celebration in “Funhouse,” Davey tells Tony that Eric is going to Montclair State University, paid for by his brother-in-law. He also says he’s divorcing Christine and got a job as a ranch hand out west. Not too far from Vegas.

The Many Saints of Newark hits theaters Oct. 1 and will stream on HBO Max for the month of October.

Batman: The Doom That Came to Gotham | Trailer | DC
The only way you’ll get me to run is if a Allosaurus is chasing me.🦖 #short #shorts #scifi
The Sandman | Comic to Screen: Hob Gadling | #Shorts
How Did the Cordyceps Infection Start In The Last of Us Games?
Should Marvel Change MCU Strategy on Disney+?