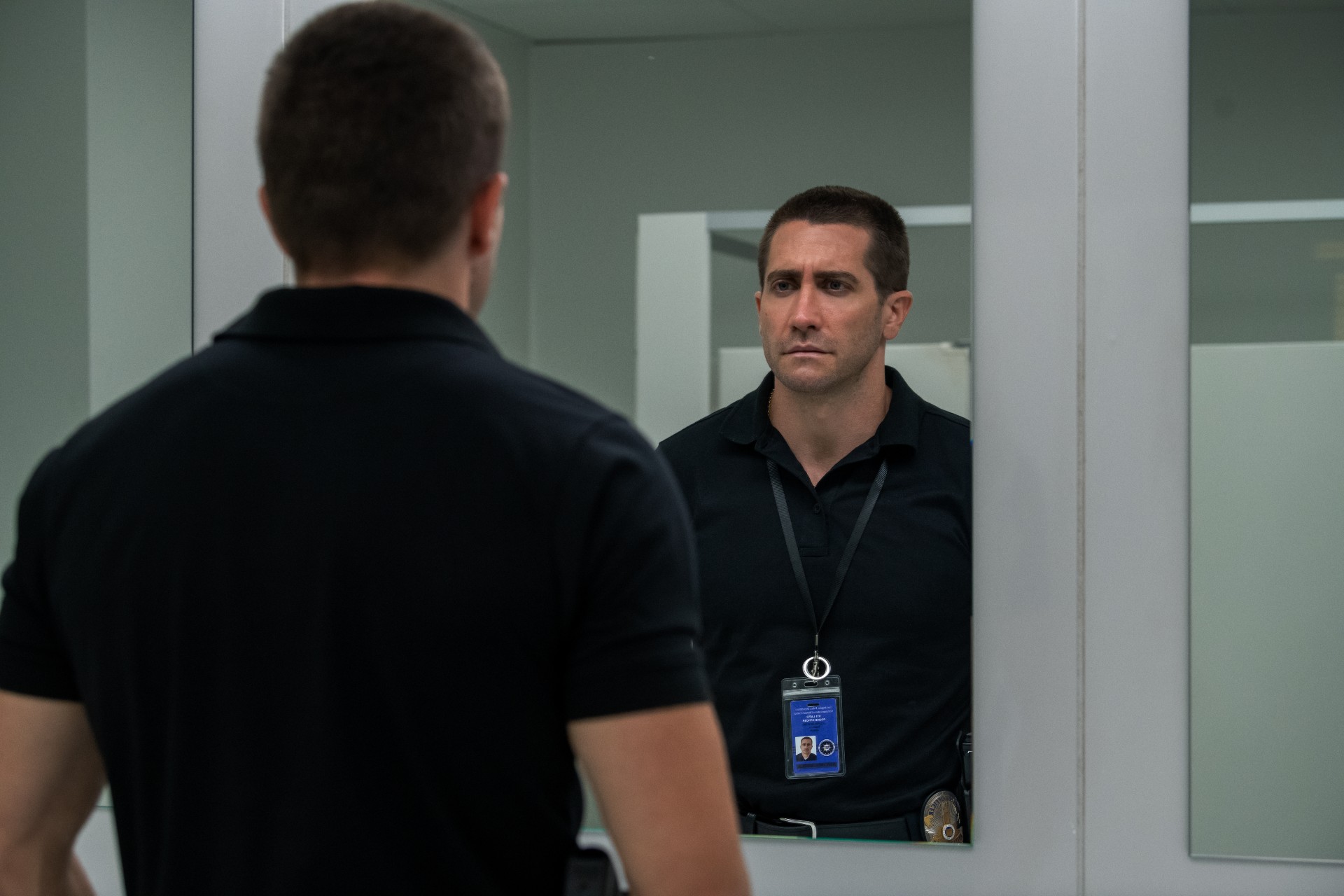 The quarantine movie — a film shot during the pandemic following the appropriate guidelines set forth by the CDC — will be a curious sub-genre to look back on. While these movies vary in quality and sometimes choose to explicitly place themselves in a world where COVID-19 is raging (something I can’t quite bother with now, but may appreciate at a later date), they all share similar characteristics: small casts, limited locations, chatty scripts.

Antonie Fuqua’s The Guilty, a remake of 2018 Danish hit Den Skyldige written by True Detective scribe Nic Pizzolatto, is certainly a quarantine film. While the cast includes Ethan Hawke, Riley Keough, Paul Dano, Peter Sarsgaard, Bill Burr, Eli Goree, and Da’Vine Joy Randolph, you mostly only see leading man Jake Gyllenhaal. Gyllenhaal plays Joe Baylor, a police officer working a shift at a 911 emergency response center in Los Angeles. The previously mentioned actors only feature as voices that Baylor hears through his headset. Baylor has been stuck on the phones for the last six months due to an incident that occurred on the job. In the time since, Baylor has been separated from his wife and daughter, living in an AirBnB, and preparing for a looming court date that could see him back in uniform and on the street.

Joe is near the end of a high-pressure shift, with California wildfires complicating even the simplest of emergency response calls. Things escalate when he receives a call from Emily (Keough). At first it appears that Emily may have dialed 911 by mistake, as she seems to be talking to a child, but Joe quickly realizes that the call may not be what it seems. Springing into hero mode, Joe takes the limited details he has and starts ordering around the California Highway Patrol Dispatcher (Randolph), CHP officers, his former partner Rick (Goree), and even his old sergeant (Hawke) to help Emily.

First things first, if you’re going to rest your film on a single performance, then casting Gyllenhaal is a safe bet. The Guilty plays to his strengths; Gyllenhaal bulges his eyes, yells, acts confused, and always seems on the verge of combustion. Another thing that Gyllenhaal is great at is selectively turning his charm on and off. He can play the hero, sure, but he’s also well equipped to play psychos and unlikable jerks, and he gets to bounce back and forth between the extremes as Joe Baylor. Simply put, Joe is an asshole. He judges every person calling 911, lashes out at coworkers, and does not have an ounce of patience. It’s plain to see why an officer like Joe may be in some trouble.

That trouble, however, fuels Joe’s pursuit in helping Emily. It’s clear that Joe believes that he can make up for whatever he’s done by saving the day, even if he does so without an ounce of tact and clear rule bending. Joe’s past is obviously eating him up inside, and Gyllenhaal makes it appear as if the man is literally fighting internal demons while those around him walk on eggshells. It’s a showy performance, but it’s justified by the high-pressure job and Joe’s gnawing conscious.

That said, the script is paper thin and not very subtle. It’s clear that there’s going to be a twist in Emily’s story, and the tension is undercut by waiting for the other shoe to drop. When it does, it lays the misery on thick and doesn’t justify the lead up. Also, Joe’s predicament is never detailed in a meaningful way. We know he messed up, but it’s kept very vague, and it’s unclear what the film is trying to say about officers like Joe. Toward the end of the film, one of the very few actors other than Gyllenhaal randomly sums up the theme of the movie in a single sentence just in case the audience wasn’t clear on what the throughline was supposed to be.

Fuqua keeps things tight and never boring throughout the 90-minute runtime, juxtaposing Joe’s headspace with a huge panel of screens showing the fire-licked chaos raging around LA, but The Guilty feels like all show with little substance. While Gyllenhaal delivers a powerful performance, The Guilty’s script doesn’t have anything interesting to say beyond its melodrama. It’s all character study but lacking proper context. There are worse ways to spend 90-minutes, but The Guilty needs more than a livewire lead performance to burn bright.

FLASH FACTS | Official Trailer
Is This Succession Character Harboring a Painful Secret?
Happy Valley Series 3 Episode 5 Review: James Norton Kills It As Tommy Lee Royce
How Did the Cordyceps Infection Start In The Last of Us Games?
Should Marvel Change MCU Strategy on Disney+?