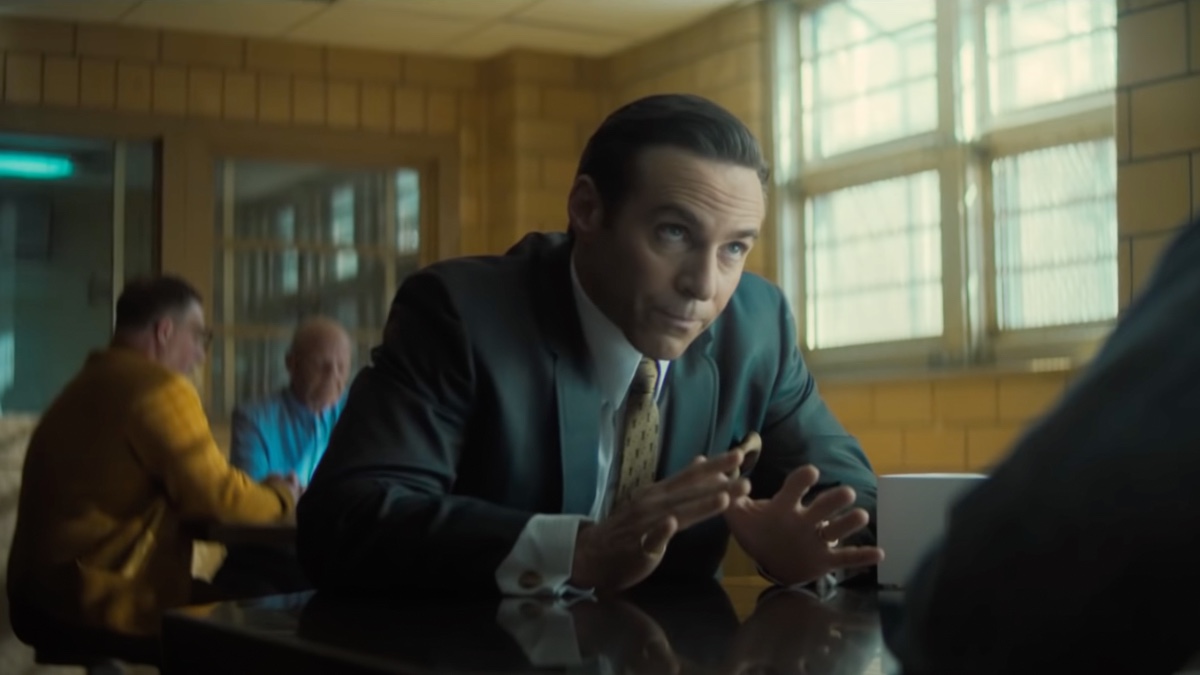 When I first walked out of The Many Saints of Newark, my initial reaction was to call it a B-movie. What I didn’t say at the time, however, was how much I love B-movies. While I saw the flaws in the film and couldn’t wholly endorse it to cinemagoers spoiled by the perfection of The Godfather, Goodfellas, and New Jack City, I can wholeheartedly recommend it to people like me. Those who appreciate the low-budget gangster movies sometimes because of their warts. A majority of fans of The Sopranos will have the same reaction: Meh, The Many Saints of Newark could have been better. So when’s it playing next? I plan to see it again, more than once, on the big screen.

In one of the film’s quieter moments, the Soprano family is gathered around a TV set, watching the classic Key Largo (1948). The specific scene on the screen begins when Humphrey Bogart’s cynical combat veteran Frank McCloud defuses a tense situation with the gangster Johnny Rocco. Played by Edward G. Robinson, Rocco is very loosely based on Charles “Lucky” Luciano, the godfather of organized crime, who had been deported and barred from American soil. He is suffering the same doubts Tony Soprano (James Gandolfini) worries about in the pilot episode of The Sopranos: Are the best days of this “thing” over?

All gangsters want, as the black and white film explains, is more. Will they ever get enough? They never have. I don’t suppose they will. It is the same for gangster genre fans. We want more. And it doesn’t have to be great. “I don’t want it good. I want it Tuesday,” Jack Warner famously said about the gangster films his studio excelled in. Warner Bros. invented the gangster genre, and I felt a thrill when their name came first on the screen during The Many Saints of Newark. WB’s Key Largo is a prestige film. It’s got John Huston directing, he’d go on to make amazing mob movies, culminating with his magnificent Prizzi’s Honor. Key Largo boasts an A-list offering with top stars like Lauren Bacall, Claire Trevor, and Lionel Barrymore. And it’s a pairing of two legends who take their performances seriously, and believe in the art of acting: Bogart and Robinson.

But Bogart and Robinson made four B-movie gangster classics before they made the prestigious Key Largo: Bullets or Ballots, Kid Galahad, Brother Orchid, and The Amazing Dr. Clitterhouse, which was so badly scripted that the two leads took to calling it “The Amazing Dr. Clitoris.” I’ve seen it eight times. Are there holes in the story? Of course. And they don’t get any better after the third viewing. What does get better is watching the performances of two professional actors in films they are on record as saying they did not like. Twice, as it turns out, because it was revived as a radio play a few years later, according to the book Bogart, by A.M. Sperber and Eric Lax.

Robinson played a psychiatrist, studying Bogart’s gangster, and the two characters bond while keeping a wary distance. This is very similar to the dynamic between Tony Soprano and Dr. Melfi (Lorraine Bracco) on The Sopranos. She even worried the mob boss was using their therapeutic sessions in the furtherance of crime, something Bogart’s character did in the B-movie gangster film, King of the Underworld, which is awful and I never miss. I love that movie, not in spite of Bogie’s misunderstanding of the meaning of “the moronic type,” but because of it. He doesn’t do that in other movies, even in the masterful B-movie gangster comedies, It All Came True and All Through the Night.

But Bogart also made Dead End (1937), a quality piece, which happens to be my favorite film, ever. Based on the play by Sidney Kingsley, it spends a lot of its time in the same way The Many Saints of Newark does: teaching the young generation how to be gangsters. This is seen even more blatantly in the film Angels With Dirty Faces (1938), which paired James Cagney with the Dead End Kids. But threads of this even reach the juvenile delinquent movie Blackboard Jungle, also not a big-budget film, but realistic enough to show the teenagers were actually moving swag for bigger names.

When Tony and his young gang hijack the Mr. Softee truck and give out ice cream to kids for free, it feels like The Sopranos creator and The Many Saints of Newark co-screenwriter,  David Chase, was chasing the feel of the East Side Kids. Old Bowery Boys movies were aired weekly in the New York/New Jersey area when Tony was growing up, and all those movies were made by the icon of B-Movie studios, Monogram Pictures.

Monogram Pictures sat on Hollywood’s “poverty row,” and churned out pictures as fast as Detroit made cars. The Bowery Boys comedy troupe made almost a picture a month alone. But just like the Warner Brothers assembly line occasionally manufactured transcendent art, some of the cheapies are magnificently crafted. Sopranos fans should watch Angels in Disguise, one of the lesser-known gangster comedies, directed by Jean Yarbrough in 1949. It is, if not the first, one of the first mock-documentaries, and it is a good bet David Chase saw it, more than once. Leo Gorcey is even more of a master of the malaprop than Carmine Lupertazzi Jr. (Ray Abruzzo) on The Sopranos.

Monogram Pictures also caught the attention of French directors François Truffaut and Jean-Luc Godard, who structured films based on their model, according to the book The Films of Jean-Luc Godard by Wheeler W. Dixon. It is no wonder, the studio’s almost-no-budget 1947 quickie Dillinger turned RKO contract player Lawrence Tierney into an icon of film noir. The Fall Guy, from the same year, dared to coke up the star Leonard Penn, and we’re not talking soda pop.

Also in 1947, 20th Century Fox’s low budget Kiss of Death introduced the screen audiences to the sadistic Tommy Udo. The role earned Richard Widmark an Oscar nomination for Best Supporting Actor, and the admiration of “Crazy” Joe Gallo, whose insurrection against the Five Families of New York crime was the basis for Francis Ford Coppola’s The Godfather.

Low budget studio production paved the way for the independent film movement in America, which The Many Saints of Newark proudly emulates. Director Alan Taylor recently admitted to Den of Geek that he’s “drunk deep at the well of Scorsese,” and we can see Mean Streets all over the Sopranos prequel. Also in evidence is Barry Shear’s Across 110th Street (1972), which pitted the Italian mob against Black gangsters; John Cassavetes’s 1976 indie classic, The Killing of a Chinese Bookie; The Pope of Greenwich Village (1984), directed by Stuart Rosenberg; and Abel Ferraro’s King of New York (1990).

The Many Saints of Newark is also too closely related to Wim Wenders’ 1977 gangster film, The American Friend, which cut corners on plot points as much as it did on budget. Logic is replaced by street smarts, and continuity is a game of three card monte in B-movie gangster films. The Many Saints of Newark is not exempt. There is a scene where one mobster’s mistress is sleeping with the rival for his turf. Except for one rude stare, the audience doesn’t see it coming. But how it turns out, with the convenient surf and turf to cover the evidence, is telegraphed from a mile away.

Arthur Penn’s genre-redefining Bonnie and Clyde came out in 1967, the same year as The St. Valentine’s Day Massacre. Roger Corman spared every expense for his B-movie mobsterpiece. There are scenes where it is visibly apparent that a fleet of vintage background cars are just the same few automobiles driven in circles around the set. I’ve seen both movies multiple times, and enjoy them equally each time.

Just because The Many Saints of Newark isn’t a perfect film does not make it less of a classic. It certainly doesn’t make it less appealing for repeated viewings. The film follows a grand tradition of gangster filmmaking: street legal over mainstream currency, it could have fallen off the back of a truck. I would love to see whatever scenes were cut to make it fit into a two-hour viewing, because the film felt rushed. But I will watch it again.

The Many Saints of Newark premieres in theaters and on HBO Max on Friday, Oct. 1.

Arrow Season 6 Episode 16 Review & Reaction | AfterBuzz TV
The Witcher Season 1 Episode 5 “Bottled Appetites” | AfterBuzz TV
The Last of Us: How Long Does It Take to Beat the Games?
Marvel Studios’ Ant-Man and The Wasp: Quantumania | Before
FLASH FACTS | Official Trailer