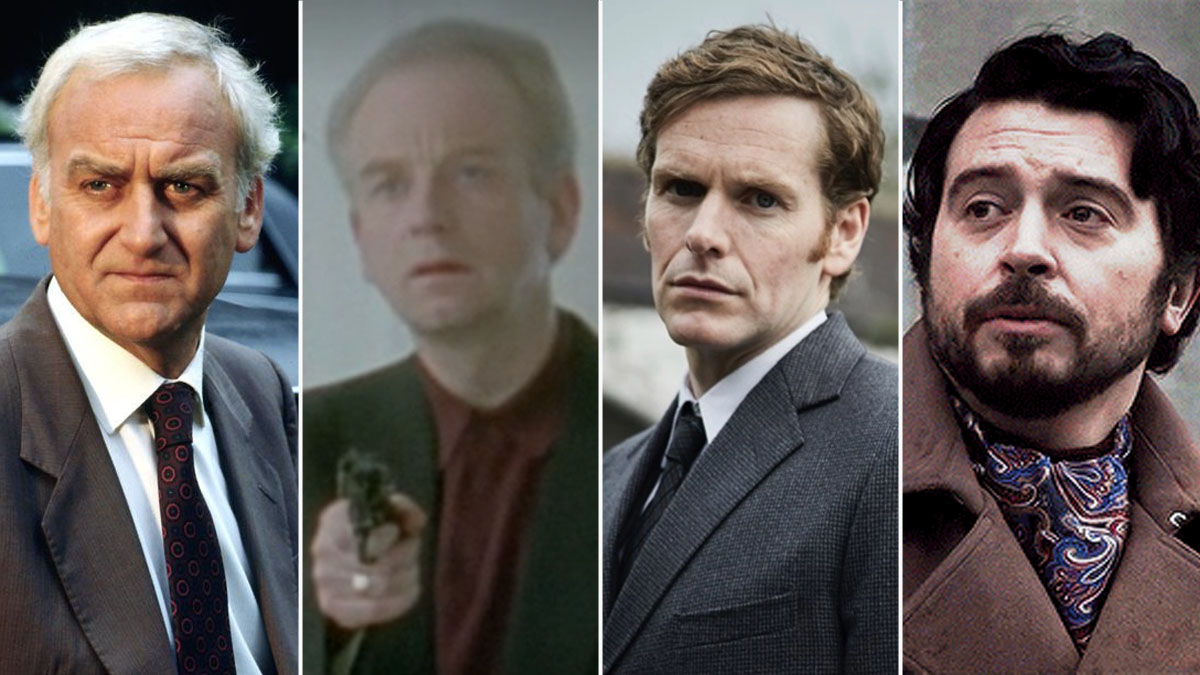 There’s a beauty to mystery that could hardly be lost on fans of Endeavour, a series with playfulness in its bones, as evidenced by its regular tips of the hat to pop culture and Morse creator Colin Dexter. The show’s viewers understand that ambiguities deliberately positioned as such should be allowed to stand, unaccosted by any fun-sucking need for certainty. We’re not here to unweave rainbows or clip angel wings.

That said, Endeavour does love a game, and its fans love to play along. So while appreciating that some things are destined to rightly remain in the hazy hinterland of maybe, let’s play. The name of this game? Find Hugo de Vries!

Played by Ian McDiarmid in Inspector Morse Series 4 episode ‘Masonic Mysteries’ (1990), Hugo de Vries is a fan-favourite villain in the world of Morse. Erudite and cultured with a love of classical music, he has much in common with the detective, as is fitting for any two nemeses. A great difference of course, is that de Vries is a diabolical killer utterly without conscience.

In de Vries’ one and only Inspector Morse appearance, Morse finds himself framed for the murder of a woman from his choir, which is staging a production of Mozart’s The Magic Flute. After the murder, Morse finds almost £100,000 transferred to his bank account from the charity administrated by the victim. Morse’s personal file on the police computer is hacked to insert a fictional past event in which he supposedly attacked a woman, and his guvnor – McNutt at the time – covered it up. His home is set on fire, he’s pulled over and breathalysed after an anonymous complaint is made about his erratic driving, his Jag is vandalised with masonic symbols and McNutt’s dead body is discovered in his bathroom. All of it, realises an increasingly unhinged Morse, is the work of de Vries, who’s borne a grudge against Morse since his sergeant days.

Endeavour being the story of those very days, Inspector Morse fans have been watching the prequel closely for a cameo by the younger Hugo de Vries. After another ‘Masonic Mysteries’ character, Marion Brooke, turned up in Series 3’s ‘Arcadia’, Endeavour writer Russell Lewis was asked in this 2017 interview whether Endeavour would one day bump into de Vries. Lewis replied, “Each thing in its season. I shouldn’t be surprised to see him sooner or later.”

Jump forward four years to a post-Series Eight finale exchange on Twitter when Lewis is asked the same question. The writer’s answer this time is more playful. “Ah, Hugo. Who can say if he hasn’t already crossed our path? He might well have done, of course. On the other hand… ‘Now you see him, now you don’t. That’s de Vries all right’.”

In the spirit of investigation, let’s assess the evidence. Is Lewis just teasing or has Hugo de Vries already crossed our path in Endeavour, namely in the form of Ryan Gage’s Series Seven villain Ludo Talenti?

That name alone may contain all the clue we need. Not only do Hugo and Ludo bear more than a glancing resemblance, but the latter in Latin is the first person of the verb ‘to play’. ‘I play… many talents’ would be an inelegant translation. A better one might include the possible allusion to Patricia Highsmith’s famous conman Tom Ripley, given the epithet ‘Talented’ in his first appearance. Like Ripley, both Hugo and Ludo are master manipulators who charm and inveigle their way to wealth, leaving a trail of bodies in their wake.

To jog the memory, Ludo recurred throughout Series Seven, initially presenting himself as a university contemporary of Morse’s who ran into him after Morse’s wallet was lifted at a garden concert (almost certainly a ruse designed to engineer the ‘accidental’ meeting). Ludo befriended Morse and the pair bonded over a shared love of opera. Ludo’s family is in shipping, he tells Morse, and he travels around raising money for their charitable fund, driven by a pursuit of music and beautiful women.

When Morse asks him which country he’s from, Ludo is coy, preferring to say he is a “man of the world.” He later tells a childhood story about life during Nazi occupation, which throws up various suggestions but like so much Ludo says, that could well be fiction. For what it’s worth, the saying he cites as from his country, “Do not praise a day before sunset,” is Polish. And what of Hugo de Vries’ nationality? Ian McDiarmid’s accent in ‘Masonic Mysteries’ is difficult to place, though the name is Dutch (borrowed from a famous botanist), and he faked his death in prison in Sweden. (Ludo incidentally tells Morse that he posed as a Swedish policeman on the phone once to track the detective down.) Ludo’s name, it’s revealed in the Series 7 finale, was taken from the gravestone of a 16th century priest on Venice’s San Michele cemetery island.

To tot up the similarities so far, that’s two criminals, of indiscriminate European origin, around Morse’s age, fluent in the language of classical music and opera, living under assumed names. Both also share a snobbish disdain for the police. Ludo expressed surprise that a man as cultured as Morse would be “a lumpen, plodding petty official” while Hugo sneered at Morse’s colleagues going about in pairs “like low comedians.” They also share a similarly rarefied, Bond Villain-ish way of speaking (Every man has his price, every man, I shall make it my life’s business to find yours,”), and express the same nihilistic attitude. “Life, death, rich, poor, it’s all a roll of the dice, Morse, there’s no reason to any of it,” says Ludo, foreshadowing Hugo’s words when he forces Morse to his knees at gunpoint in ‘Masonic Mysteries’. “He was clever, you see,” Inspector Morse tells Lewis in that episode, “he took one look and knew your weakness right away.” In Series 7, Ludo jokes to Morse that he will find his weakness and exploit it without mercy to his own ends.

What else? The nature of their crimes. In ‘Masonic Mysteries’ Morse tells Lewis that his past encounter with de Vries saw him con Oxford University out of millions of pounds. His scam had a kind of poetry to it – posing as the heir to a Swedish armaments manufacturer, de Vries proposed the building of an institute for peace studies. His later scheme involved stealing money from Marion Brooke’s charitable foundation to frame Morse.

Ludo’s Series 7 scheme was less poetic, but of a similar flavour. He bought up life insurance policies of people looking for a quick pay out, killed them, cashed in, and disguised the deaths as freak accidents. One such victim was poor Carrie Bright, the cancer-suffering wife of ACC Bright. (In a rather baroque twist, the initials of the locations for each murder spelled out the name L.U.D.O.). Both men wore disguises to do their evil work – de Vries posed as a homeless man to murder Morse’s former guvnor McNutt, and Talenti posed as a healer to gain access to the Bright home and sabotage their Christmas lights, causing Mrs Bright’s death by electrocution. Note in the image above the name of the Executive Director of Ludo’s fake company ‘California Amenity Redemption and Disbursement’ (or C.A.R.D, perhaps another game-play reference…) in the signature on one of his victim’s letters: E. De Vere?

Hugo and Ludo didn’t work alone on their devilish schemes, they each had a female accomplice. Hugo’s was the aforementioned Marion Brooke, a devotee who shared his revenge obsession (Hugo’s the kind of man who makes women kick off their shoes and men open their chequebooks when he enters a room, Morse once told Lewis). Ludo’s was Violetta (played by Stephanie Leonidas), who started a passionate affair with Morse during his holiday in Venice. In the Series 7 denouement, Ludo says that he picked Violetta from the streets when she was 15 years old and “gave her the world,” forcing her to become his co-conspirator in the life insurance murders and the plan to make Morse his “pet policeman”.

On the subject of having police officers in your pocket, Hugo de Vries’ association with Morse’s longstanding adversaries the Masons mustn’t be forgotten. De Vries taunted Morse with his masonic connections, through Mozart’s freemason-themed opera The Magic Flute. There’s no evidence that Ludo Talenti was involved with the freemasons yet, but Endeavour viewers know that they’re in full operation in Oxford at the time.

Endeavour and Violetta met at a performance of ‘La Sposa del Demonio’ in Venice, an operatic work by Endeavour composer Matthew Slater, which translates fittingly as ‘The Demon’s Wife’. Demons come up a great deal around Talenti and de Vries. “There speaks a devil sick of sin,” Ludo says to Endeavour. “There may not be a devil, but there’s devilry alright, and de Vries…” says Inspector Morse, walking away from Hugo’s burial and doubting whether or not he’s really in the coffin. (De Vries’ name, cryptic crossword fans can’t ignore, shares its first three letters with ‘devil’). And perhaps it just suited his complexion, but Ludo wears deep red numerous times in Series 7, perhaps in echo to de Vries’ burgundy shirt in his sole appearance.

Speaking of that Venetian denouement, did Ludo not die after being shot by Fred Thursday and falling into a canal, putting the kibosh on the ‘Ludo is Hugo’ theory? Well, he was certainly shot, and he certainly did fall into the canal, but did he die, or did that devil live to return and torment Morse under a new name in future adventures? You’ve heard the evidence. What’s your verdict?

Endeavour Series 8 is available to stream on ITV Hub and Britbox.

The Last of Us: What Happens to Bill and Frank In the Game?
SHAZAM! FURY OF THE GODS – Official Trailer 2
Dave Bautista Has Talked to James Gunn About Future DC Movie Plans
Gunther’s Millions: The True Story Behind Netflix’s Rich Dog Docuseries
James Gunn’s Plan for DC Video Games Sounds Awfully Convoluted