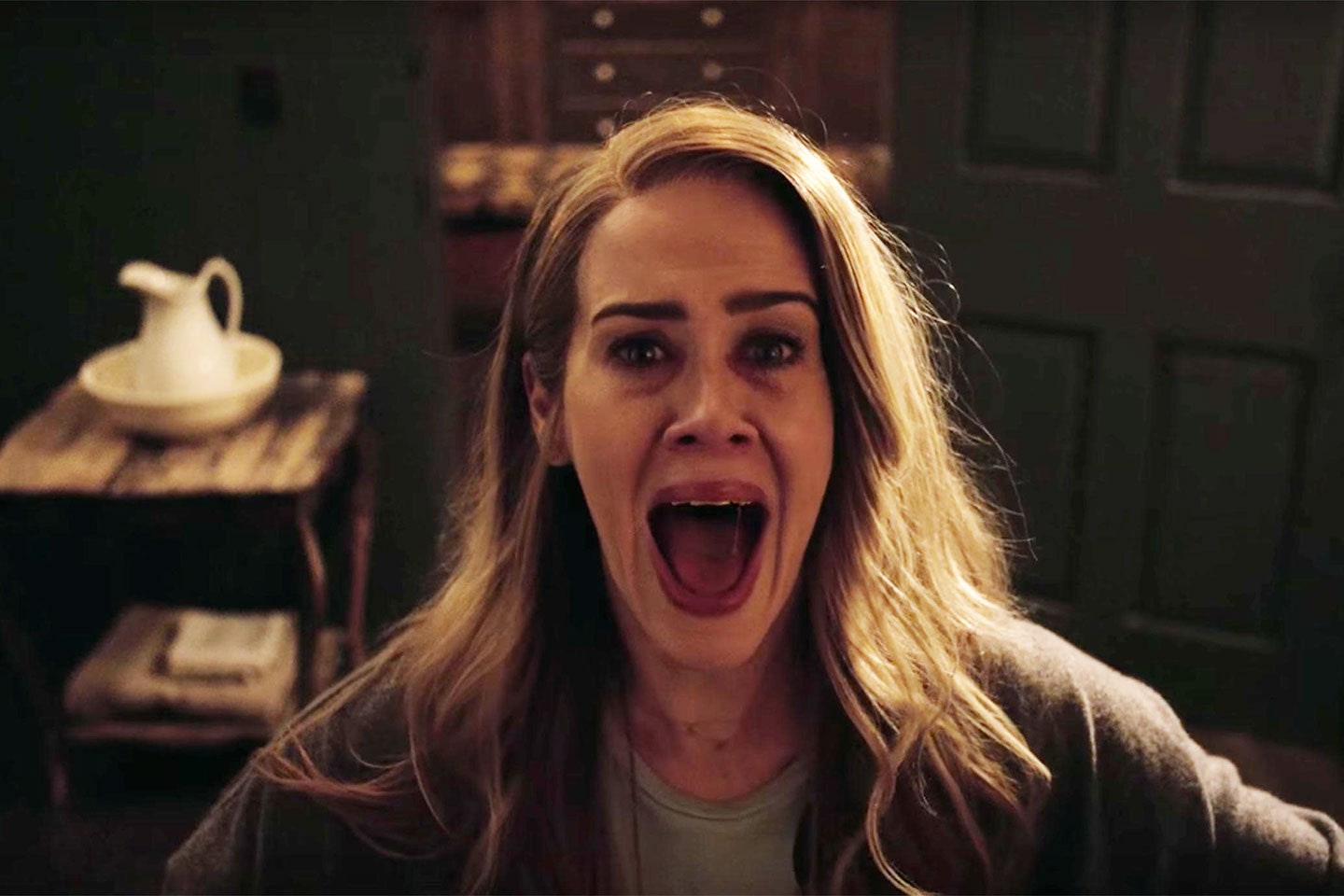 Some days, it’s hard to be a Ryan Murphy fan. The minute American Horror Story comes up, people have a knee-jerk reaction. It’s either love or hate, no in-between. And that’s been going on for a decade now.

But there must be some grotesque alchemy behind this lifespan. Many horror TV series have never quite achieved the liftoff and cultural imprint that AHS has. In 2011, when the first season premiered, the only horror-themed TV show on a major network was The Walking Dead. While there is a rich and under-explored tradition of anthology horror shows (Masters of Horror, The Twilight Zone) which fall into the tradition of the standalone TV movie, often anchored by a horror host, AHS was aiming for something that sat between prestige television and Grand Guignol.

The first season, Murder House, created a blueprint for some of the elements that remain at the dark heart of American Horror Story: a coarse smoothie of true crime history, distinctly American moral panics, and a love of horror movie traditions, all wrapped up in grotesque violence and over-the-top horniness. It’s a horrific live-action version of The Sims, each season completely unpredictable and totally familiar at the same time.

Over the last decade, Murphy and Brad Falchuk have created a horror equivalent of the MCU: an expanded universe with shared rules, shared spaces, and a repertoire of recurring characters and actors. And in 2021, they’ve expanded it even more with the standalone series American Horror Stories, which takes on elements from previous seasons but has a new cast and new story every episode. The 10th season of the show, Double Feature is airing now.

What makes AHS so enduring? At the start of the show, every season was billed as a standalone story with a distinct beginning and end, usually anchored by a place that implies creepiness and has a long-standing presence in horror history (a haunted house, an insane asylum, a dark forest, a summer camp, a haunted hotel, a witches’ coven). From Freak Show, the show’s fourth season, the series started becoming interconnected, with characters from previous storylines popping up or being referenced. The show’s eighth season, Apocalypse, functions as a double-sequel, both to the story of Coven’s witches and to the fate of the demon-child from season one.

Even though every season of American Horror Story, regardless of how they are connected, explores a distinct theme and has its own separate set of characters, there are elements that are recognizably Murphy-esque.

The show is concerned with Otherness. Rather than hide its monsters in the closet or in the basement (although it has, quite literally, done that), it puts them front and center and often makes them the lead character. In Murder House, Tate Langdon (Evan Peters), the ghost of a teen school shooter, is arguably the main character with the most compelling arc. In Hotel, the entire world and all the other characters gravitate around glamorous vampiress The Countess (Lady Gaga). And in Apocalypse, the antichrist Michael Langdon (Cody Fern) isn’t held back until the climatic face-off; he’s the main attraction. AHS takes all the distinctively American outsiders and builds stories around them, zeroing in on our shared, somewhat morbid curiosity about them and infusing those stories with empathy. In AHS, serial killers can be heartbroken and witches can be insecure. At its most successful, the show asks us to empathize and connect with the most monstrous of characters, peeling back the curtain to reveal the real monsters are not who we think they are.

Monsters make for juicy roles. One of AHS’s superpowers is its repertoire of actors, some of whom have found mainstream recognition and success through their work on the show and other Ryan Murphy productions, including Sarah Paulson and Evan Peters. AHS is also often credited with bringing a new audience to established older actresses like Jessica Lange, Angela Bassett, and Kathy Bates. The former, in particular, has been a staple and a shining star of the American Horror Story universe, playing Southern belle bitches and grand witches. After a period of inactivity and lesser roles, Lange’s creative partnership with Murphy gave us some of the most despicable and watchable female characters in horror. The entire fourth season, Freak Show, which marked Lange’s last full season as a principal cast member, was an extended love letter to the actress.

This approach to casting AHS is, essentially, a take on the Old Hollywood studio system of casting, where actors would be cast into roles based on their looks and what expectations those looks communicated to the audience. On AHS, the same actors are recast every season, but each time it’s a radically different character. Additional faces are added into the repertoire and become staples of the show, like Cody Fern (who first worked with Murphy on The Assassination of Gianni Versace: American Crime Story), Matt Bomer (who went from a bit part on Freak Show to a leading role in Hotel), Angela Bassett (who has appeared in every season since her turn as Marie Laveau in Coven) or Finn Wittrock (whose first major role was as the psycho man-child Dandy Mott on Freak Show and has since become a go-to player in the troupe).

This creates an interesting meta-dynamic between the audience and the show. With every passing season, we want to see how far the cast will flex their acting muscles. Will they be a lead or a supporting character? Will they play a historical figure? Sometimes the same actor will play two or more roles in the same season, even the same episode. Evan Peters, who appeared in every season since the very first episode, played not only the lead antagonist of Cult, but five historical characters on top of that. Murphy has also known exactly when to deploy smart stunt-casting, most notably giving Lady Gaga her first major screen role as The Countess in Hotel. Her theatricality and sultry charisma are perfect for a role that requires everyone who comes into contact with the glamorous vampire to become instantly, supernaturally obsessed with her.

There is heaps of sex, but contrary to horror traditions it seldom leads to death. In fact, it’s often intertwined in ways that make sex the only respite from the onslaught of murder and dismemberment. In Murder House, the character of Moira, initially presented to us as a Halloween-shop version of a slutty maid (played by both Frances Conroy and Alexandra Breckenridge) is only seen as alluring and promiscuous by the men who are incapable of seeing her as a person. Being seen this way is her own version of hell after she is murdered by the wife of her boss who tried to sexually assault her.

Horror has often provided meaty roles for actresses beyond the reductive “scream queen” term. AHS has, over the past decade, done not only that but also smuggled in difficult subjects for them to explore underneath all the camp. Throughout its run, AHS has tried to delve into ideas of motherhood, abortion, aging, power, sexuality, disability, and race. It hasn’t always succeeded (Coven, despite the glorious, spiky dialogue and fine performances, is extremely problematic in its attempt to discuss racism and its traumatic legacy).

The recurring centering of the Other, and the deliberate pushing of boundaries squarely places American Horror Story in the tradition of the Grand Guignol.

It’s a slicker, sexier version of the horror theatre. It takes everything we know about horror movies and infuses it with some old school Hollywood glamour, without the training wheels.

While the self-aware theatrics can be grating on some horror fans, that’s precisely the charm of AHS. We don’t come to AHS for nuance, we come for extreme violence, to see every possible taboo grotesquely defiled—and then giggle at the bitchy barb that follows.

Pizza Tower Is the Best New Wario Land Game We’ll Probably Ever Get
DC Movies and TV Shows: Full DCU Schedule
The Last of Us: Who Is Kathleen In the Games?
Comic To Screen | The Sandman | DC | #Shorts
Sci-Fi Short Film: “Kinetic” | DUST