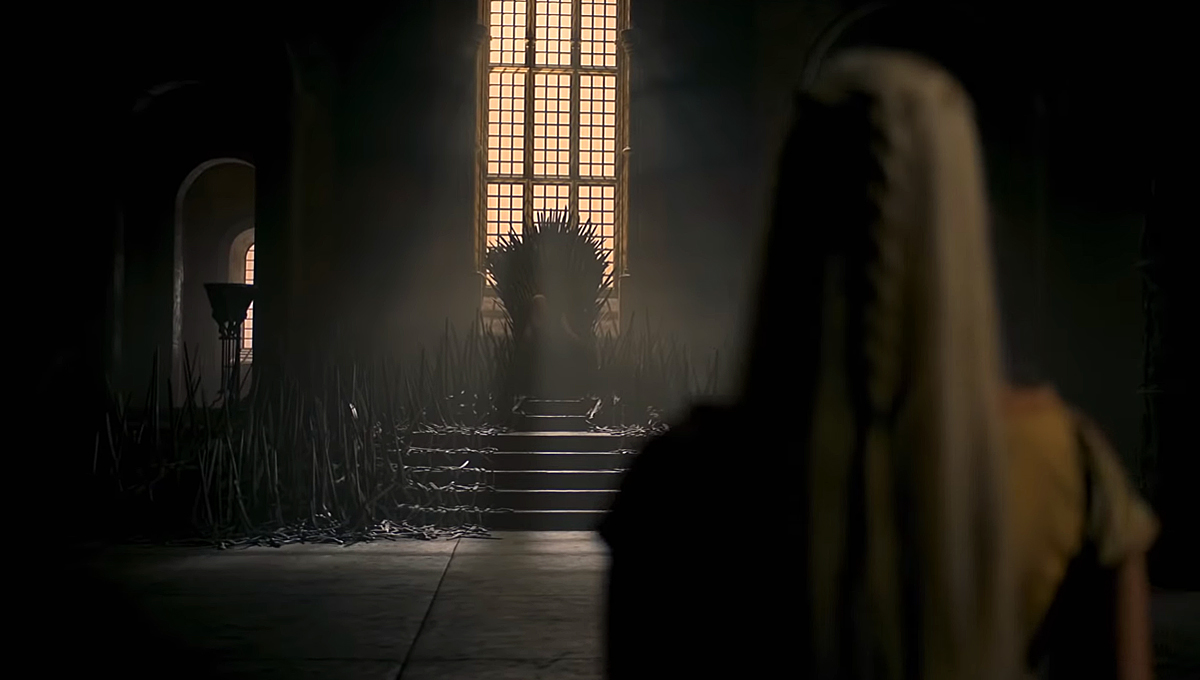 The arrival of House of the Dragon’s long-awaited debut trailer reveals a version of Westeros in which royal House Targaryen reigns supreme with the strength of swords and the fire of dragons. Yet, while the defining symbol of said supremacy, the Iron Throne, makes an appearance, it looks dramatically different from the one coveted by claimants some 200 years later during the events of Game of Thrones. Interestingly, the throne’s new look actually better reflects creator George R.R. Martin’s more-menacing vision of the challenged chair.

The Iron-Throne-accompanying trailer line, delivered by Prince Daemon Targaryen (Matt Smith), reveals a practical level of self-awareness from the dragon-riding warrior royal, who is the younger brother of ruler King Viserys I (Paddy Considine). While one might offer a snide addendum that incest also played a factor, with Daemon being married to his brother’s daughter, first-born would-be royal heir Princess Rhaenyra Targaryen (Emma D’Arcy), we always knew how this family rolls, and dragons do tend to dominate conversations. Yet, over a century earlier, the fiery breath of one dragon in particular, Balerion, was used by Aegon I to melt 1,000 blades of the family’s defeated enemies to form the Iron Throne, which resides in King’s Landing’s dominant castle, the Red Keep. Thusly, House of the Dragons’ rendition makes a better attempt to match Martin’s lore.

“I state repeatedly in the book that the Iron Throne is huge… huge,” explained Martin years earlier in a now-frequently-cited sit-down. “It towers over the room like a great beast, and it’s ugly, it’s asymmetric. It was put together by blacksmiths, not craftsmen and experts in furniture manufacture.”

Of course, the Iron Throne showcased in the House of the Dragon trailer still doesn’t quite measure up to the description in Martin’s novels, in which the blades-bearing bench is said to be elevated over 10 feet above ground, giving its regal occupant a looming, almost godly look from above, as a sinister-shaped shadow is cast down from sun-illuminated windows that reside in the background. However, the seat has a thorny, asymmetrical appearance, making it—as Martin intended—functionally impractical, especially with the bushels of swords melted to each side of the steps, seemingly inviting frequent accidental pokes (and no tetanus shots to be had).

The chair’s evil aesthetic is an annoyingly high price to pay for what Martin calls “a sign of dominance and conquest.” In fact, Martin has stated that artist Marc Simonetti’s altitudinal, grandiose take on the Iron Throne is the only rendition that accurately captures his original intent. As you can see in the comparison directly below, inspiration from Simonetti is clearly present in House of the Dragon‘s design, albeit altered for practicality.

Indeed, Martin’s novels repeatedly focus on the purposeful impracticality of the Iron Throne’s structure-building swords, notably in A Feast for Crows, which vividly describes how—centuries after House of the Dragon’s events are relegated to ancient history—Aerys II Targaryen, a.k.a. the Mad King, was tormented by his time in the chair, which left him perpetually covered with scabs and half-healed cuts—earning him the alternate nickname of King Scab. It was, perhaps, a contributory factor to that king’s fateful madness, which would become a crucial reason for Robert’s Rebellion, which resulted in an unprecedented defeat for the Targaryen family, the rule of King Robert Baratheon, and the general stage-setting for Game of Thrones.

Pertinently, House of the Dragon’s version of the seat is a departure from the one we’ve come to know—and was made indelibly iconic—on Game of Thrones. That version (pictured immediately above,) was a more minimal interpretation of Martin’s menacing designs, showcasing what is essentially just a seat seemingly made from melted swords. While the array of swords sticking out the back nevertheless made the piece appear ominous, it was, perhaps, too functionally ergonomic for its intended torturous nature. Additionally, it substituted Martin’s crucial literary element of high-ascending stairs for a plain layered dais—seemingly made from stone, not iron like in the books—thereby presenting a high level of elegance that belies the books. In fact, those differences inspired a legendarily meta moment on Thrones during an exchange in which the imperious, chaos-ladder-climbing Littlefinger (Aiden Gillen) stares at the empty Iron Throne, telling Varys (Conleth Hill), “There aren’t a thousand blades. There aren’t even two hundred. I’ve counted.”

That rather tongue-in-cheek moment, which likely went over the heads of non-book-readers, nevertheless served as the canonical explanation as to why the Iron Throne was so lacking on the series. Of course, the inside baseball explanation was much simpler, attributed to HBO’s initially-fledgling Game of Thrones TV series endeavor not having the budget to construct the room-engulfing eyesore from Martin’s mind, especially since some of said budget was blown having to re-shoot its pilot from scratch. Additionally, such a seat would be unavoidably cumbersome, since it would necessitate the construction of a significantly larger throne room set, and require the actors to constantly navigate around a set piece that is legitimately dangerous. Indeed, the possibility of your main stars constantly getting jabbed and occasionally experiencing debilitating falls from atop the ten-foot steps is obviously unideal for any TV series.

Consequently, it will be interesting to see how House of the Dragon pulled off this slightly-more-authentic interpretation of the Iron Throne from a practical standpoint. While we can safely make an educated guess that the swords are CG elements, we are still left with a canonical inconsistency regarding the throne’s look—one that might just be resolved, plot-wise, on the series before all is said and done. Of course, the presumed radical redecoration of the Iron Throne will be the least of our characters’ worries on the prequel series, which will showcase devastating intra-Targaryen tumult leading to the royal civil war historically known across Westeros as the Dance of the Dragons.

House of the Dragon will premiere its 10-episode inaugural season on HBO in 2022 on a date to be revealed.

Marvel Studios’ Doctor Strange in the Multiverse of Madness | Get Tickets Now
Junji Ito Maniac: Ranking the Stories From Creepy to Downright Terrifying
Dave Bautista Has Talked to James Gunn About Future DC Movie Plans
Marvel Studios’ Ant-Man and The Wasp: Quantumania | Experience
The Last of Us: Can Ellie Infect Others?