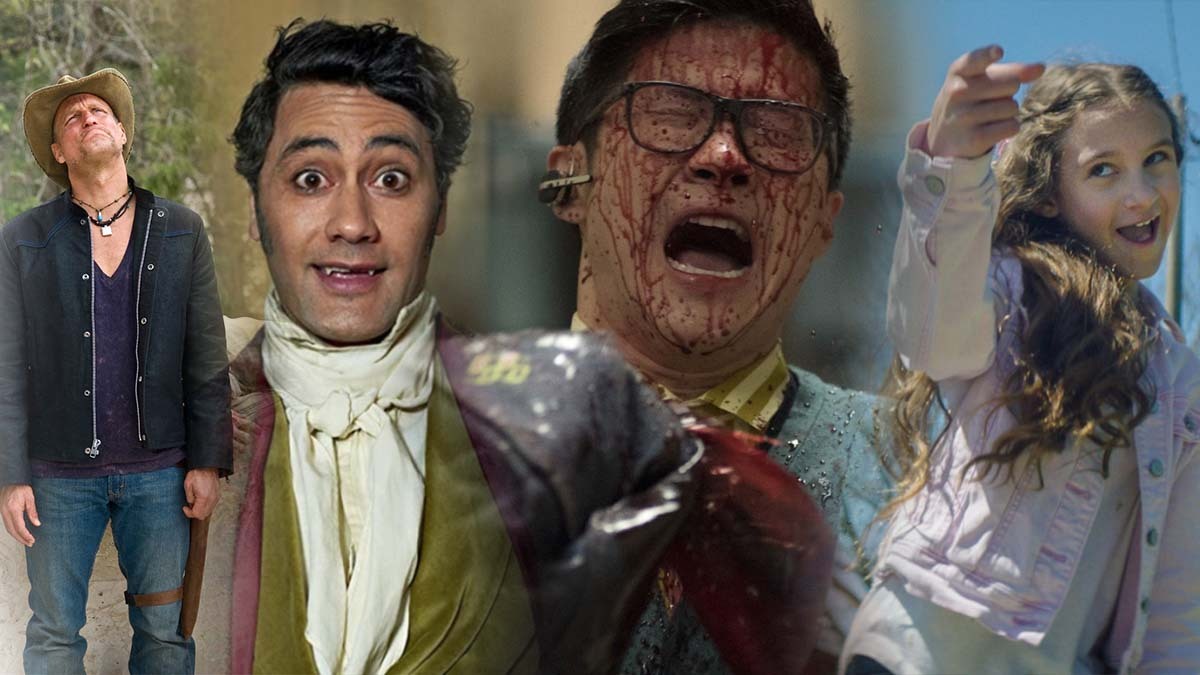 Spooky season isn’t just about candy and trauma (although we enjoy those things as much as the next person), it’s also a perfect time to gather together for giggles. Horror and comedy go hand in hand and as well as the classics like An American Werewolf in London, Young Frankenstein and Army of Darkness the 21st century has coughed up plenty of new gems. We’ve rounded up 13 of our favourite to delight and amuse you this Halloween.

Just because you’re a redneck, it doesn’t make you a psycho, in this deceptively adorable anti-slasher where a bunch of vacationing college kids keep accidentally getting themselves killed trying to escape from the harmless Tucker (Alan Tudyk) and his lovely friend Dale (Tyler Labine). Eli Craig’s directorial debut is gruesome, gory, and very funny, but the movie is more than just a gimmick: there are some top horror twists here, too.

Possibly the most iconic horror comedy of the 21st century, Edgar Wright’s Shaun of the Dead is the first part of the director’s “Cornetto Trilogy,” which all riff on genre and all star Simon Pegg and Nick Frost. Shaun is a “zom-rom-com” which sees Pegg’s leading man trying to win back his girlfriend in the face of a zombie apocalypse. It’s achingly British in its humor but has become an international cult classic, with cosplayers regularly dressing as Shaun. It came out in 2004 but still completely holds up today.

The movie that spawned the excellent TV show is a deeply funny mock-doc about vampires who share a house, written and directed by Taika Waititi and Jemaine Clement, who also star alongside Jonny Brugh and Ben Fransham. Set and shot in Wellington, New Zealand, the humor is silly, self-effacing, and specific. A genuinely hilarious riff on vampire and werewolf tropes.

One of the most joyful new horror comedies sees an all-powerful force of evil bested by the small girl who inadvertently releases him from cosmic jail. Problem child Mimi and the brother she bullies discover they can control “The Arch-Duke of Nightmares” and rename him Psycho Goreman. They just want to play games, he just wants to destroy the universe. Packed with over-the-top gore, great gags, and a surprising level of sweetness, this is an ’80s-style schlocker with a modern twist.

Directed by Drew Goddard, who went on to make the stylish, and star-studded Bad Times at the El Royale, this clever, surprising, love-hate letter to the horror genre is packed with rug pulls, reveals, and gags. The movie juxtaposes a typical gang of teens taking a doom-laden vacation and the white collar workers who are pulling the strings behind the scenes. If you somehow missed it–go watch! Now! If you’ve seen it before, this is a movie that rewards repeat viewing.

This Canadian eco-horror about, yes, killer trousers, which played the festival circuit before making its way to Shudder, is actually smarter than it appears. Slaxx is set around a trendy designer store which purports to be ethically sound but is anything but. Yes, there are multiple pants-based slayings as a sentient pair of jeans exacts its bloody revenge on the store workers, but there’s also dark satire and a killer sense of humor at work here–and surprisingly a catchy, cool dance routine to boot.

Zombieland: Double Tap seemed a little late when it came out in 2019, but that shouldn’t detract from the original, which was a refreshing take on the zom-com with great performances from its now-starry cast. Zombieland sees a bunch of misfits who name themselves after their respective hometowns navigate the apocalypse via a strict set of rules. Emma Stone, Jesse Eisenberg, Abigail Breslin, and Woody Harrelson star in this zippy comedy with heart, and a surprise cameo to die for.

If a film ever truly captured the spirit of Halloween it’s this one. Michael Dougherty’s seasonal anthology movie weaves together four stories with a wraparound that brings just the right level of chills and giggles–it manages to be both funny and scary without compromising either. A murderous school principal, a bus driver with a horrible past, teenage girls reclaiming the night, and a little kid dressed in a burlap sack bring the Halloween spirit to life in this cult movie with a cool cast including Brian Cox and Anna Paquin.

This Groundhog Day-style slasher sees college student Tree Gelbman (Jessica Rothe) get murdered on the day before her birthday, only to discover she’s stuck in a time loop and destined to relive the day over and over. It’s up to Tree to work out who’s been killing her, while fixing some bad life choices along the way. Blackly funny with some good kills–even if it is, largely speaking, the same person being killed–Happy Death Day is a glossy production from Blumhouse which spawned a sequel in 2019 that is also worth checking out.

Karen Kusama’s tasty teenage satire was somewhat misunderstood at its release, criticized by some for not being funny or scary enough. But in recent years it has been embraced for its feminist themes as Megan Fox’s popular cheerleader Jennifer becomes demonically possessed and begins attacking the boys at her school. Amanda Seyfried is great as Jennifer’s best friend Needy, while Fox shines in her best role. Juno’s Diablo Cody wrote the screenplay, too, so the dialogue is as spiky and sharp as Jennifer’s teeth.

Breakout Japanese indie One Cut of the Dead is a film of three parts, and there are three stages of watching. Part one: Why does everyone keep going on about this low-budget zombie film? Part two: OK fine, it’s smarter than I thought, but get a grip people. Part three: OMG One Cut of the Dead is the greatest film ever, I love it so much, it’s so clever and funny and brilliant, I must tell everyone I know about One Cut of the Dead. That’s all you need to know.

It’s a concept so cunning we wonder why it hasn’t been done before. Magic hokum means a teenage girl suddenly swaps bodies with a deranged serial killer. How will she convince anyone that he is really her, while stopping her possessed body from murdering her pals? Happy Death Day director Christopher Landon heads up this quirky slasher comedy which stars Vince Vaughn and Kathryn Newton having the time of their lives.

Before he became a comic book movie darling, James Gunn made his directorial debut with this icky black comedy starring Nathan Fillion, Elizabeth Banks, and Michael Rooker. A small town is invaded by an alien parasite who takes over the body of one of the residents, transforming him into a grotesque, tentacled being intent on breeding and infecting the townsfolk. Influenced by David Cronenberg’s Shivers and The Brood, this is tongue-in-cheek body horror only for the strongest of stomachs.

Junji Ito Maniac: Ranking the Stories From Creepy to Downright Terrifying
Xbox’s Lack of Exclusives Has Been a Real Problem For the Series X/S Generation
Why Pierce Brosnan Will Always Be Gaming’s Greatest James Bond
Sci-Fi Short Film “The Kid” | DUST | Throwback Thursday
The only way you’ll get me to run is if a Allosaurus is chasing me.🦖 #short #shorts #scifi