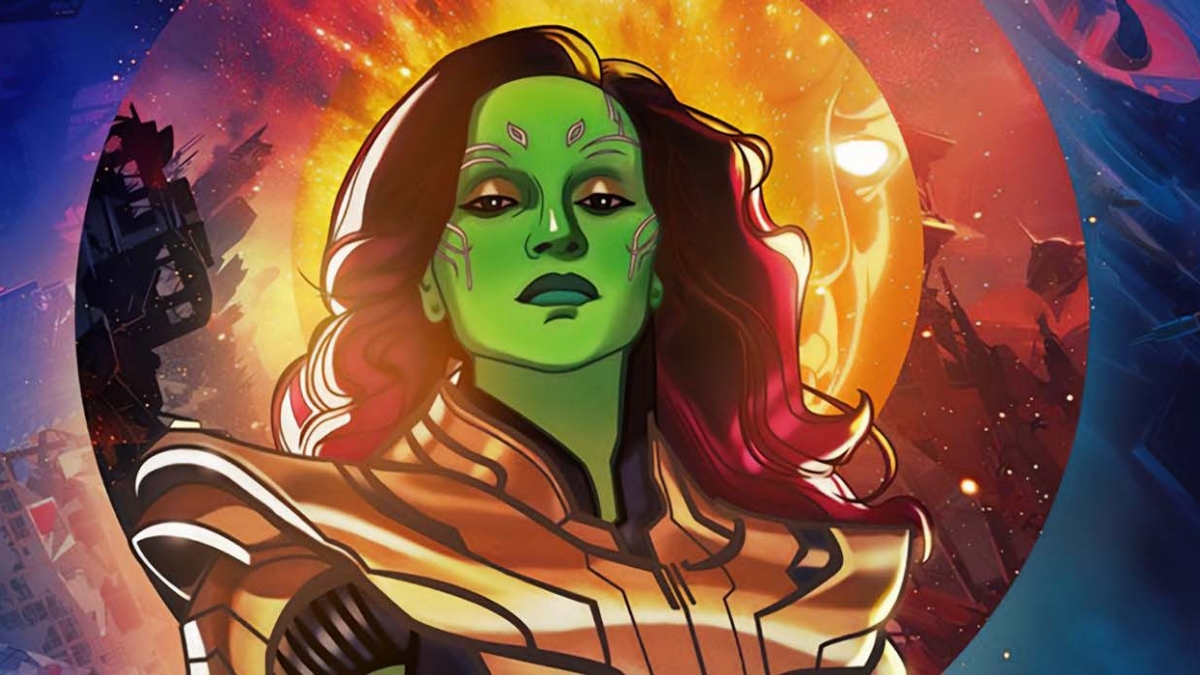 This article contains spoilers for Marvel’s What If…? Episode 9.

Marvel’s What If…? finished its first season with its ninth episode, bringing everything together for one, big climactic finale. To defeat a multiversal threat in Infinity Ultron, our narrator Uatu the Watcher put together heroes from previous episodes to form the ultimate team. This team-up found a way to call back every one of the alternate worlds we’ve visited so far, whether it was the roster itself, a cameo from the Marvel Zombies, or an epilogue involving the world where the Avengers were murdered.

Everything was wrapped up with a nice bow, but there was one glaring problem: the Guardians of the Multiverse included a specific version of Gamora from a universe that we’re not familiar with, even though the narrative acts like we are. Hell, outside of a brief moment during Infinity Ultron’s rampage through his own galaxy, this is our first time seeing Gamora at all in this series. She wasn’t even mentioned in the T’Challa Star-Lord story.

When gathering soldiers against Ultron, Uatu stops at Nidavellir, where we see Gamora, Iron Man (in a rather funky suit of armor), and Eitri disposing of an empty Infinity Gauntlet. As Tony Stark starts going into the same kind of diatribe that created Ultron in the first place, Uatu reveals himself and identifies Gamora as the one who killed Thanos. Against Infinity Ultron, she brings to the table a special device created to annihilate the Infinity Stones called the Infinity Crusher.

So…what happened? Is this one of those Sentry situations where we saw the adventure but collectively forgot about it?

This phantom episode (presumably named something like “What If… Iron Man Landed on Sakaar?”) was not only supposed to happen during the first season, but it was one of the first episode concepts anyone figured out because Lego had released a set based on it! Known as “Tony Stark’s Sakaarian Iron Man,” the set included figures for Tony Stark, Valkyrie, and Uatu the Watcher. No details on the episode were mentioned on the box.

It should be noted that the only other Lego set to come out with this series is based around Captain Carter and the HYDRA Stomper.

The nexus point for this world was supposedly that after nuking the aliens at the end of Avengers, Iron Man wasn’t able to fall through the portal in time. Instead, he drifted through space until ending up on the planet Sakaar, where he had to use his genius mixed with the techno junk around him to survive.

According to showrunner AC Bradley, the season was supposed to be 10 episodes long, but got cut short one due to COVID slowing things down. This Sakaar episode had to be sacrificed, but will indeed show up in season 2. Also of note is that this episode is supposed to be a full-on comedy, much like the one about Thor being an only child. On one hand, that’s weird to imagine considering it culminates in Gamora slaying her father to save the universe, but then again, it’s Sakaar. Of course more Grandmaster would lean towards comedy.

The real comedy is the way Uatu casually dismisses Stark. After so many episodes of Stark being killed, the Watcher understands that you can’t lose if you don’t play. So there’s your surviving Iron Man in the multiverse, getting benched.

While the episode’s omission sticks out like a sore thumb in this big team-up finale, phantom episodes aren’t exactly new to Marvel cartoons. X-Men: The Animated Series had a similar situation back in the third season during the whole Phoenix Saga. One episode ended with Jean Grey dramatically sacrificing herself to save the team. The very next episode started with her back at the mansion with very little explanation. Turned out there was an entire episode in-between based around Cyclops’ grief that they didn’t get around to making until the final season.

There’s no confirmation yet on when we’ll be getting What If…? Season 2, but at least we have some idea of what we can look forward to. Here’s hoping for an episode where Uatu meets Ant-Man’s friend Luis.

If you want to dig deeper into What If…?, please consider subscribing to Marvel Standom on the Den of Geek YouTube channel, where we dish out weekly episodes on all the new Marvel TV series, trailers and movie releases. Can’t stand our faces? That’s fair! You can listen to Marvel Standom on Spotify and Apple, too.