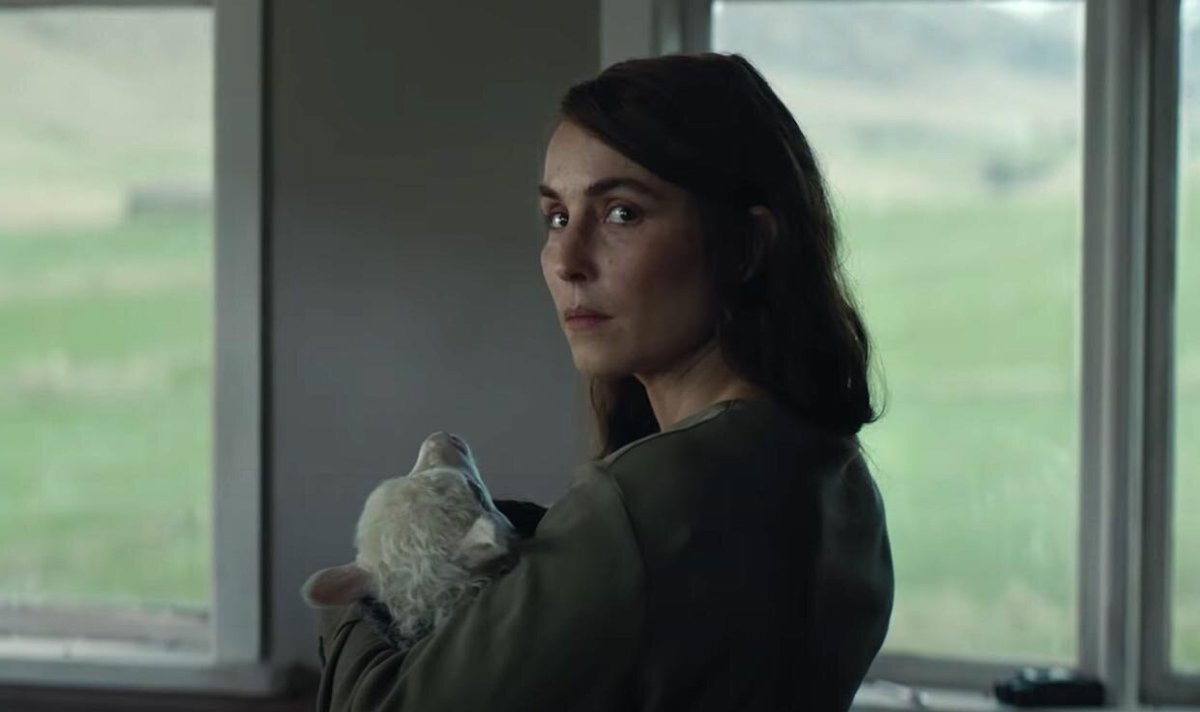 Noomi Rapace has been waiting for Lamb all her life. That’s how she describes the new pseudo-folk horror being released by A24 this week: something close to kismet. The film’s first-time director and co-writer, Valdimar Jóhannsson, had even crossed paths with Rapace before this movie, back when he did special effects work on Prometheus (2012) in his native Iceland. Yet it was only after she really got to know Jóhannssson nearly a full decade later, and once he showed up at her door with a drawing for a creature who was half-lamb and half-human, that she felt the touch of destiny.

“It’s been before and after Lamb for me, as a human and as an actress,” Rapace tells Den of Geek. “And I felt it when Valdimar came to London. I just knew in my body and in my soul I had to do this, and I’d been waiting for this film. It brought me back to my roots and where everything started.”

Those roots of course go deeper than when she broke into Hollywood with movies like Prometheus, just as they also dig further down than even her original Lisbeth Salander in The Girl with the Dragon Tattoo (2009). This extends to a bedrock, foundational level for Rapace—back to when a young Swedish girl moved with her family to Iceland, living a life very similar to the one in Lamb: where you looked out at a harsh landscape and imagined what lay beyond.

Indeed, the movie Lamb begins on a frozen and stormy Christmas Eve, with lonely farmers Maria (Rapace) and Ingvar (Hilmir Snær Guðnason) oblivious to the cries of their sheep as an unseen visitor creeps into the barn. But this assailant’s work becomes visible enough the following spring—after one of the sheep gives birth to something that is neither lamb or human. In the eyes of most, it would simply be an abomination. But to Rapace’s Maria, the babe’s a gift from God. It’s a balm after she lost a daughter long ago. Now she will claim another, naming her Ada.

When we sit down to speak with Rapace and Jóhansson in New York City, they have an easygoing camaraderie after shooting in a landscape that is as unforgiving as it looks onscreen. They’re also in frequent agreement, including with the insistence that Lamb is not a horror movie. In their minds, it’s a folktale of the Nordic tradition, which is something they’re both intimately familiar with.

“We’ve been talking about Christmas and when I first moved to Iceland,” Rapace says. “And throughout Christmas there is this overhanging threat, an evil witch called Grýla. She has 13 sons, because the 13th son in Iceland is [supposed to be] really evil, and they start coming 13 days before Christmas, and one comes every day.” She then adds with a laugh, “If you’re not a good kid or you don’t behave, you get snatched and punished.”

Indeed, Grýla is just one of many folklore figures who touch on a primal Icelandic tradition. For his part, Jóhannsson recalls Grýla’s “Christmas Cat,” an enormous beast, which like the witch herself, would devour naughty children every Yuletide. It’s frankly a more hardcore legend than Santa Claus or even the Germanic Krampus, but to Jóhannsson and his leading lady, they’re less tales of horror than of mythic caution. A reminder of the natural way of things, particularly in the director’s homeland.

As a man with vivid memories of his grandparents on a sheep farm, and how he would visit them during the “magical time” of lambing, with newborn creatures entering this world, Jóhannsson almost saw this movie like a waking dream. It was memories of those days that first brought the idea of Ada to Jóhannsson as he was drawing a series of sketches; the culmination of a particularly creative period in his life. And he tells us now that “she is almost exactly how we planned from the beginning” in the final film.

With that said, in his first drafts of Lamb, including with co-writer and poet Sjón, Ada was a much more knowable character than the one who is alluded to in the movie.

“At one point, we thought she should talk,” Jóhannsson says. “But because we used [live] animals in the film, we decided we should treat Ada the same. [The viewer] has to give her what we leave out. Like when you see the cat or the dog, you probably decide for yourself what they are thinking about or what their feelings are.”

For Rapace, this also meant acting in as many scenes with actual lambs as it did human actors. Either way, it was left to her imagination to find the face of a beloved child.

“It required a lot of patience,” Rapace explains, “but at the same time we did shoot with real babies and real lambs. Sometimes there was this puppet. But it felt like she actually came to life on the day. I was acting with real lambs most of the time, so I would almost forget that she was not there when we were shooting.”

More difficult for Rapace may have been returning to filming in Icelandic summers. As with Prometheus before it, she filmed under a “midnight sun.” And like Ridley Scott on that film, Jóhannsson too became obsessed with that singular “beautiful” light. But for an actor and crew it can bring out a different reaction.

“It was already quite intense, just living with Maria in me,” says Rapace, “she totally hijacked my body and my mind, and I didn’t socialize with anyone else. And then in Iceland during summer… it’s like two in the morning and it looks like midday, and everybody’s got to go a little bit cuckoo, because you have no rhythm. There’s nothing to hold onto, and you almost start to morph into different shapes of yourself.”

Those shapes can take you back in time though, including to those aforementioned roots. While Rapace didn’t grow up surrounded by sheep-people, she recalls all too well the horses, dogs, and a couple of pigs on her “poor farm,” as well as the feeling of living apart.

Says Rapace, “I did live a life that was isolated from the sophisticated and technical civilization. So it wasn’t too alien for me to deliver baby lambs and to drive a tractor, even though I had not done either before.”

It also wasn’t hard to remember in Iceland, a country still marked by active volcanoes and lava which you can see from your backyard—literally in Jóhannsson’s case—that the natural world is always there. And it can be unforgiving.

“That is the nature of Iceland. It’s angry and it’s dangerous,” Rapace says before forming a smile. “So like be aware of who you fuck with.”