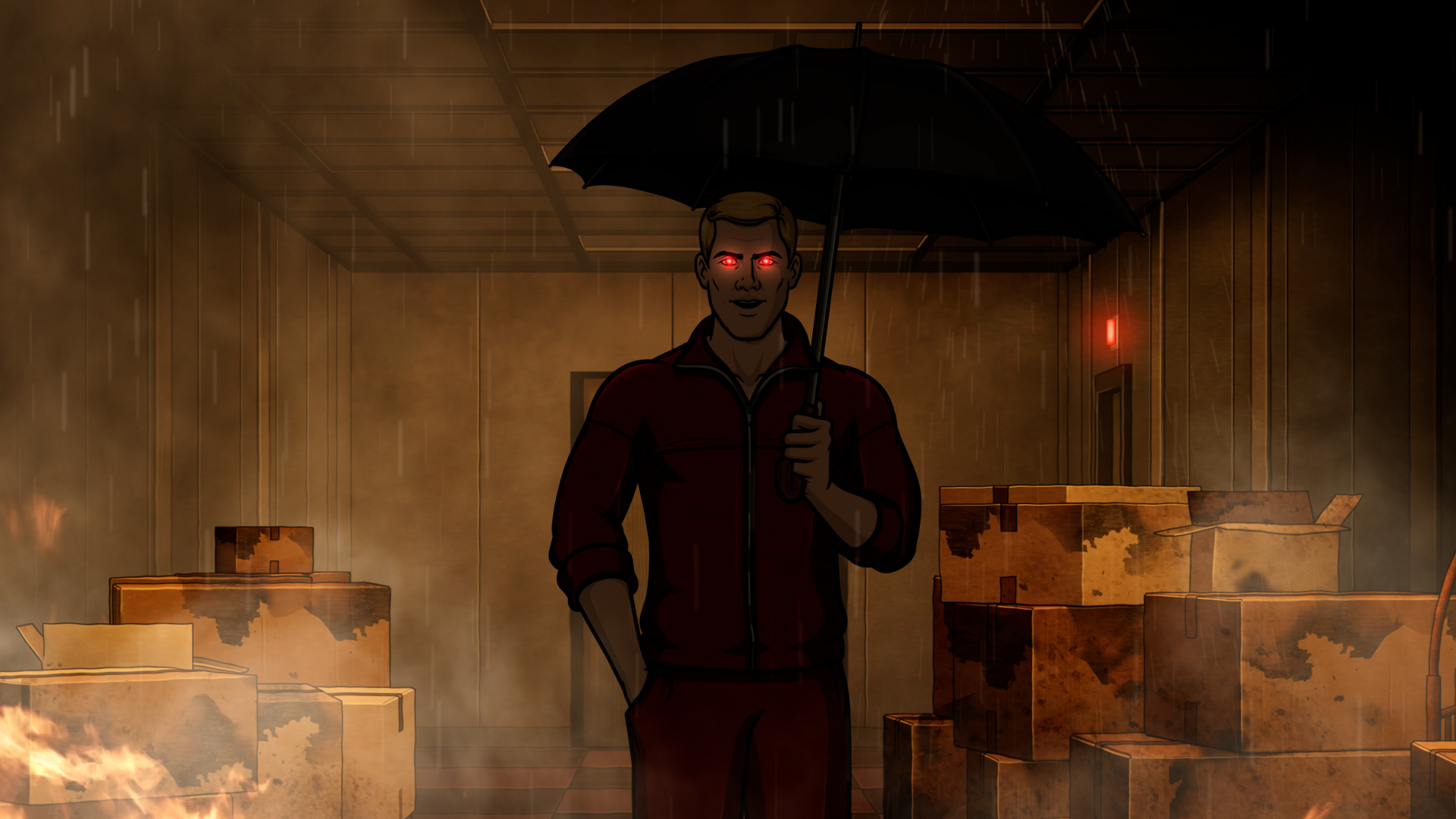 This article contains spoilers for the Archer season 12 finale.

Archer season 12 has been a fascinating year of self-reflection that’s pushed its characters to difficult, new places–both personally and professionally–while they attempt to finally deal with their baggage. Archer and its cast so effortlessly use humor as a defense mechanism that it can hit even harder when these characters let down their walls, which has been omnipresent during the tail-end of this season.

“Mission: Difficult,” the culmination of Archer’s 12th season acts as a satisfying endpoint for the narrative that this stretch of episodes has explored, but it also makes some very interesting decisions when it comes to the show’s future. Archer’s executive producer Casey Willis, along with producer and director Pierre Cerrato, help unpack the events of this finale, the return of Barry (and Other Barry), Malory’s exit, and what’s next for these seasoned, sarcastic spies in season thirteen.

DEN OF GEEK: Now that this season has wrapped up, what were the biggest themes and ideas that you wanted to communicate across these episodes?

CASEY WILLIS: Themes for the season are sometimes an organic process. We go into the season with  pretty broad concepts, but as the episodes are written the themes narrow or branch off into related areas. One of the biggest themes this season was small business (The Agency) vs. large corporations  (IIA). I think we hit that one pretty well. We also wanted Lana to struggle with…well, everything: career, motherhood, marriage, etc. We wanted to contrast what she had in season 11 with what she  was going through in season 12. It was also exciting to work with the diverse writing staff this season and see what everyone was able to contribute to their scripts and the Archer universe.

PIERRE CERRATO: I think particularly with Lana, she served as a reflection of what a lot of us were going through. Not so much the billionaire husband thing, but just all the doubts and confusion 2020/2021 cast on everyone.

“Mission: Difficult” ties up a lot of the loose threads from “Colt Express” and continues that story. Did it always seem like the right approach to conclude the season in this big two-part manner?

PIERRE CERRATO: It’s hard to think of our finale as a single episode. We would not have been able to get through everything in that timeframe. We could definitely do a “Snyder Cut” of the two-parter.

CASEY WILLIS: We also had a lot of fun ideas for Eric André and “Colt.” Even with the two-parter, there were some really funny things that ended up on the cutting room floor.

Barry (and Other Barry) make their triumphant return here and much of this finale focuses on the bond that’s grown between Sterling and Barry. Why was now the right time to bring back Barry and explore this relationship?

PIERRE CERRATO: It made sense that the big box version of a spy agency would try to add a killing machine like Barry to their roster. I’m not sure how Dave Willis feels about this, but if we include Barry too much throughout a season, each scene feels a bit less special. Barry/Other Barry is such a delightful agent of chaos that we want to make sure he appears on special occasions. You know, like a two-parter season finale.

CASEY WILLIS: Plus, as great as Barry was in season 11, Barry truly shines as a villain. In the season 12  finale, we got the best of both worlds!

Robert has been an important part of the show for the past few seasons, but it feels like this finale definitively gets rid of him and has Lana ready to move on. Can you talk a little on the trajectory of their relationship and if there’s now a possibility of a permanent Sterling and Lana reunion? Or have they both moved past that?

CASEY WILLIS: We are still determining Robert’s future, but it does feel like a chapter of his and Lana’s relationship has ended. As for Archer and Lana, in the early seasons of the show there was always a “will they, won’t they” dynamic to their relationship. During the coma seasons, we got a glimpse  into the importance of Lana in Archer’s world. So, with the small scene in Archer’s bedroom, our goal was to show a deep understanding between Archer and Lana and express how much they truly care for one another.

PIERRE CERRATO: I don’t quite see Lana getting into a scenario where she feels Archer is her only choice and “settles.” I don’t think it’s a “devil-you-know” situation with her. I agree that they truly care for each other.

Ray’s soft defection to the IIA is one of the bigger turns at the end of the season. How early was this figured out, did you ever consider somebody else to turn over instead of Ray, and at any point was this ever more of a permanent defection for Ray’s character?

CASEY WILLIS: We decided early on to have Ray playing both sides. We planted the seed in the first episode of season 12 (“Yup! Butt warmers”). Ray felt like the natural choice as the defector because he’s always had a bubbling resentment for The Agency and his co-workers.

PIERRE CERRATO: I don’t think Ray’s defection was ever going to be a permanent one. They’re family, y’all!

With Malory’s exit there are a number of directions that could be taken with the future of Agency and who’s in charge. Can you expand a little on the decision to have them get bought out by IIA and for Fabian to ostensibly become their new bosses?

PIERRE CERRATO: That feels like another “you’ll have to wait-and-see” scenario.

Can you indicate if the series may return to the ongoing mystery of Archer’s father now that his mother is out of the picture? Is the mysterious mover character who helps Sterling throughout the episode supposed to be a hint in that regard?

PIERRE CERRATO: I don’t think it’s ever been out of the scope of ideas to investigate. This season we saw how McGinley and the events of Archer’s first mission cast the die for the world’s greatest spy we all know and love. I kept saying to myself, “how cool is it that we can still tell this kind of story  after 12 seasons and it’s still interesting?!” It was also a major bonus that we were able to get Bruce Campbell for the role of McGinley!

One of this season’s best episodes was the flashback heavy “Dingo, Baby, Et Cetera” that gets into Sterling’s roots. Do you see season 13 possibly returning to that well again?

CASEY WILLIS: We joked a lot internally about how it took us 12 seasons to get a backstory episode for Archer. I don’t know if we will do another flashback heavy episode next season. Perhaps we will wait until Season 24 to do it again!

This season hops all across the globe with Agency’s many missions, but were there any destinations that they didn’t visit that you wish that they could have?

CASEY WILLIS: Thanks for noticing the globetrotting! First off, a big shout out to all the artists who  worked on designing and making the backgrounds this season. I really like going to different settings in Archer, but it makes for a lot of work. We want to get the details correct so our Art Directors are plotting out landmarks in London or researching signage in Tokyo. We have some cool ideas for new locations in Season 13, but I don’t want to spoil anything.

DEN OF GEEK: Is Pam ever going to get those bangs?

PIERRE CERRATO: I hope so! Think of all the portmanteau possibilities!

Our breakdown of the rest of Archer’s 12th season and previous writers’ room walkthroughs on earlier seasons are also available.