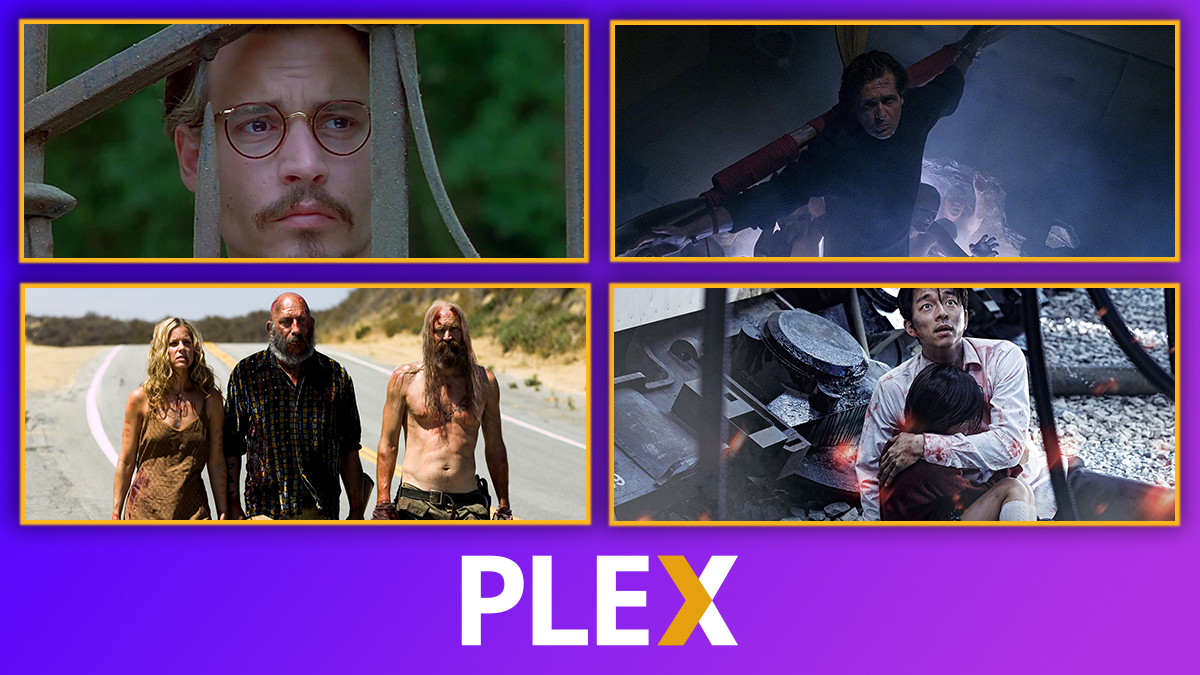 This article is sponsored by Plex. You can download the Free Plex App now by clicking here!

When October hits, the folks at Den of Geek almost exclusively consume horror content. Any spooky story that has ghosts, ghouls, goblins, or any chill-inducing monster that doesn’t start with a G is fine with us. Whether it’s a campy B-movie or “prestige horror,” we embrace all horror subgenres and relax with old favorites and new cult classics in the making alike. Now that Spooky Season is in full force, we are grateful that Plex TV is here so we can stream all of the creepy content that our black hearts’ desire for free!

Plex is a globally available one-stop-shop streaming media service offering thousands of free movies and TV shows and hundreds of free-to-stream live TV channels, from the biggest names in entertainment, including Metro Goldwyn Mayer (MGM), Warner Bros. Domestic Television Distribution, Lionsgate, Legendary, AMC, A+E, Crackle, and Reuters. Plex is the only streaming service that lets users manage their personal media alongside a continuously growing library of free third-party entertainment spanning all genres, interests, and mediums including podcasts, music, and more. With a highly customizable interface and smart recommendations based on the media you enjoy, Plex brings its users the best media experience on the planet from any device, anywhere.

Plex releases brand new and beloved titles to its platform monthly and we’ll be here to help you identify the cream of the crop. This month, we’re keeping things strictly scary, but view Plex TV now for the best free entertainment streaming, regardless of genre, and check back each month for Den of Geek Critics’ picks!

Though director Roman Polanski is a horrific figure himself, this 1999 neo-noir horror film, The Ninth Gate is superb. Thirty years after Rosemary’s Baby, Polanski conjured the devil once again and injected it with some of the pulp from his noir classic Chinatown in a movie that finds Johnny Depp as a man in Satanic Detective mode. Depp is a classic book authenticator hired to authenticate De Umbrarum Regis Novum Portis (The Nine Doors To the Kingdom of Shadows), a book believed by cultists capable of raising Satan to Earth.

The Ninth Gate doesn’t provide cheap thrills; it tightens the suspense like a noose. Polanski subtly creates an uneasy atmosphere using minimal effects. The director knows where evil lives and lets the settings and sound make the invitations with subliminal references to recognizable horror and cinematic danger, using framing and music similarly to Stanley Kubrick. The Ninth Gate packages its scares with classy style that the characters deliver with sexily provocative intelligence. Dean Corso may be Johnny Depp’s greatest spiritual transformation, from odious to ultimate evil and the audience cheers on his descent, happy to ride with him straight to hell.

The Cabinet of Dr. Caligari

Perhaps the world’s first horror film and a go-to example of early German Expressionist filmmaking, The Cabinet of Dr. Caligari has been unsettling audiences for over a century.

The film’s main story centers on two young friends, Francis and Alan (Friedrich Feher and Hans Heinrich von Twardowski), who, while jockeying for the affections of Jane (Lil Dagover), visit a local traveling carnival. There they take in the act of the mysterious, top-hatted and wild-haired Dr. Caligari (Werner Krauss). As they watch, Caligari awakens his somnambulist subject, Cesare (the great Conrad Veidt), who under hypnosis answers questions from the audience. When Alan jokingly asks when he will die, Cesare responds “Before dawn.” We’ll let you guess the rest.

The film isn’t remembered much for its story, but for its arresting visual style, featuring painted backdrops that make the entire production feel like a fever dream. The painted townscape is filled with curved and pointed buildings teetering at dangerous angles, almost as if they were alive and shrieking. Roads twist and spiral to nowhere. The perspectives are deliberately mismatched and inconsistent, with the props and sets sometimes being too large for the characters, and others too small. The result is a transgressive, deeply influential film that has been unsettling audiences for over 100 years.

Based on his 1983 novel Legion, writer-director William Peter Blatty’s Exorcist III arrived 17 years after William Friedkin’s The Exorcist. Despite the still-looming pop culture presence of the original, The Exorcist III is sneakily the most interesting film in the series. Less a horror movie than a psychological thriller with supernatural and spiritual overtones, The Exorcist III takes place 17 years after the events of the first film, and with no reference whatsoever made to the events in the second. It finds Lt. Kinderman confronted with the apparent reappearance of two figures from his past who had supposedly died. The first is father Damien Karras (Jason Miller), who had died after bouncing down an endless flight of steps while performing an exorcism in the original movie, and the Gemini Killer, a serial killer loosely based on the Zodiac Killer that had been executed 17 years prior. However, there’s been a new string of murders around town carrying all the hallmarks of the Gemini.

While the studio famously mangled Blatty’s original cut of the film, there’s still a lot to like here, including a terrifying performance from Brad Dourif. Blatty is fantastic at creating dread-inducing atmosphere and has a keen attention to character and detail. It may not be as exciting as the original, but it’s a smart-slow burn film worthy of the Exorcist mantle.

An homage to sleazy ‘70s C-movies, Rob Zombie’s sequel to House of 1,000 Corpses will leave you in the need of a shower, but it’s delightfully demented and the musician turned filmmaker’s finest effort. The shock-fest finds the Firefly clan, Otis (Bill Moseley), Baby (Sheri Moon Zombie) and Captain Spaulding (Sid Haig) – on the run from die-hard determined sheriff Wydell (William Forsythe). What unfolds is a nasty thrill ride full of twists, turns, and more gore than most audiences are comfortable with. How Zombie still manages to make such repulsive content entertaining, how he manages to get you to almost root for the despicable Firefly clan, is inexplicable magic trick, but indebted to Zombie’s use of black humor and deep knowledge of genre conventions that he sometimes subverts, but often gleefully leans into.

The overused and increasingly predictable zombie genre got a shot in the arm with Train to Busan, a South Korean film from director Yeon Sang-ho about a young father desperately attempting to get his little daughter to her mother via train as a zombie pandemic breaks out all around them. Even if it veered close to outright sentimentality at times, Train to Busan differed from most of the films and TV shows we’ve seen in this genre due to its genuine bond of love between its main characters, and the flickers of empathy and humanity found therein.

And on a technical level, Yeon crafted his film with a kinetic energy that had been missing from the genre as of late. Train to Busan was not just a monster hit in its native land but amassed an international following as well, along with critical acclaim across the board. It’s easy to see why given the film’s well-drawn characters, subtle social commentary (some on the train feel they are more worthy of survival than others) and frightening action sequences that add up to a thrilling and emotionally powerful ride.

ITV Nolly Review: Russell T Davies’ Heartfelt Tribute to ‘Difficult’ Women
Happy Valley Series 4 Won’t Happen, and That’s Perfect
Why One of Star Trek: The Next Generation’s Worst Episodes Is Still Worth Watching
The Last of Us: Who Is Kathleen In the Games?
FLASH FACTS | Official Trailer